by RWERN
Mon Aug 30, 2021 9:06 am
I like it. This route is long overdue. I think the routing via the Broad Street extension makes more sense at it is more direct and provides more connections to other lines. Going via NCS is longer with fewer connections and may require land acquisition to create a ramp between different parts of the ROW.

What I don't get is why all of the alternatives shown follow the Route 19 alignment at the north end. I feel that was included to give an edge to BRT because I don't think new rail alignment with street-running presumably just to get a stop near Main & Ward Streets is worth it. I would think a more straightforward approach would be to continue following the rail alignment to Paterson and make use of the unused trackways on some bridges on that alignment and convert the old freight terminal platforms into a 4-track light rail terminal. That way also creates an opportunity for a stop at the medical center, which would be desirable, and even a diverging route to downtown Passaic on the old Erie main. I doubt it compares poorly against the entirely new alignment idea along that portion of the route.

by njtmnrrbuff
Mon Aug 30, 2021 6:32 pm
I totally agree that the first alternative is the best route. One reason for that is that people who live in the parts of Newark along the Passaic River just north of downtown would have easy access to a light rail without having to take a bus to an existing light rail station. The first option would help spike up ridership on the existing Broad Street Station spur of the Newark Light Rail by enabling people who live in Paterson, Clifton, Nutley, and Belleville to travel to employment centers and entertainment venues in the part of Downtown NWK closest to the Passaic River. Presently the ridership on the NWK Penn to NWK Broad St light rail route is dismal.

The second alternative isn't the best but not the worst. It would have to involve adding more track capacity on the existing NWK Light Rail route from NWK Penn Station to Branch Brook Park Station. During the rush hour, light rail vehicles run every three to five minutes on that stretch of the line, with many of the cars only running as far as Branch Brook Park from NWK Penn Station. If NJT decided to stick with Alternative II, they would also have to consider where to build the rails between the Branch Brook Park Station and Verona Ave Station. They would probably have to get approval from Essex County about where in Branch Brook Park the rails can be laid. The one advantage Alternative II is that people who work at Clara Maas Hospital and live in Paterson would have easy access to their jobs. Alternative II would also enable a Nutley resident who works within the immediate block of the Essex County Courthouse to travel directly to work on the light rail.

by lensovet
Tue Aug 31, 2021 2:42 pm
Looks like comments were due 3 weeks ago, but I recommend still submitting your thoughts by email as outlined on https://www.passaiccountynj.org/news_de ... 9_R444.php.
Paul Borokhov

Of course it is. It's literally faster to walk the distance than take the light rail when factoring into account the headways. The stop density is absolutely insane — I don't understand who decided it was a good idea to put three stops just 500 ft apart from each other (Atlantic St/Stadium/Broad St).
Paul Borokhov

by njtmnrrbuff
Tue Aug 31, 2021 6:30 pm
I'm not sure if it's faster to walk over taking the light rail but I think if you jog between both stations, than it's closer. Even in a little traffic between NWK Penn and NWK Broad, it's faster to take the buses like the 72 and 76. Yes Atlantic St Station and Broad St Station are extremely close to each other but I think that's done for a reason-so that way people don't have to cross Broad St which is a very busy street and dangerous to cross.

by lensovet
Thu Sep 02, 2021 9:38 pm
But the stadium station is completely superfluous.

I said the time is faster when taking into account headways. the most frequent service is every 10 minutes, the trip itself is 8 minutes, so 18 minutes. the distance is 1 mile, i walk that in less time, no jogging required. a slow jog would be 15 minutes, a fast one would be 10.

on weekends when the service is only every 20 minutes there's no contest, especially since schedules aren't synchronized to any trains, so on average you're going to be waiting 10 minutes + 8 minute ride, and in the worst case it takes nearly half an hour.
Paul Borokhov

by Roadgeek Adam
Fri Sep 03, 2021 10:57 pm
Riverfront Stadium station is completely pointless and has been for a long time, especially now that the namesake stadium is gone.

That being said, tying this branch into the old Erie Newark Branch would probably bring missing ridership.

(Now of course, I got into it on Facebook calling some people racist about claiming it's going to be a thug producer and heroin superhighway, but, well, those people are those people.)
I didn't get into teaching for the promotions or the pension plans or so I could get to the golf course by 3:45. I did it because I wanted to help you kids. I'd forgotten that, till today. -- Principal Peter Prickly. by njtmnrrbuff
Sat Sep 04, 2021 7:50 am
There will be brand new development going up where Riverfront Stadium used to be-both residential and retail development and this could certainly help future ridership on the existing NWK Broad to NWK Penn light rail route plus help with ridership if the light rail were to ever be extended northward.

Yes, the most frequent service on the NWK Light Rail is 10 minutes but that's during the rush hours. I ride the NWK Light rail a lot and when I commute to work in Jersey City, that's what I take between NWK Broad and NWK Penn to connect to Path. The light rail service is pretty much every 20 minutes on Saturdays and every 25 minutes on Sundays-this is the entire NWK Light rail network. It shouldn't be that way on the NWK-Grove St Line in my opinion. Many people who live along the light rail line work jobs that require them to be there on weekends as well. Looking back, unless if the light rail started years ago on the NWK Industrial Track to Paterson, I would not have built the NWK Broad to NWK Penn Station Light Rail route. Ridership isn't too good on that stretch anyway and hasn't been very much. I have ridden it many times and can tell you that even during the height of the rush hour, it's been lousy.

Roadgeek Adam wrote: ↑Fri Sep 03, 2021 10:57 pm Riverfront Stadium station is completely pointless and has been for a long time, especially now that the namesake stadium is gone.

That property is proposed for major redevelopment -- hundreds of residential units and tens of thousands of square feet of office space. The wood office building has been scrapped (ok, hahaha but true) but other aspects are moving forward.

njtmnrrbuff wrote: ↑Sat Sep 04, 2021 7:50 am There will be brand new development going up where Riverfront Stadium used to be-both residential and retail development and this could certainly help future ridership on the existing NWK Broad to NWK Penn light rail route plus help with ridership if the light rail were to ever be extended northward. 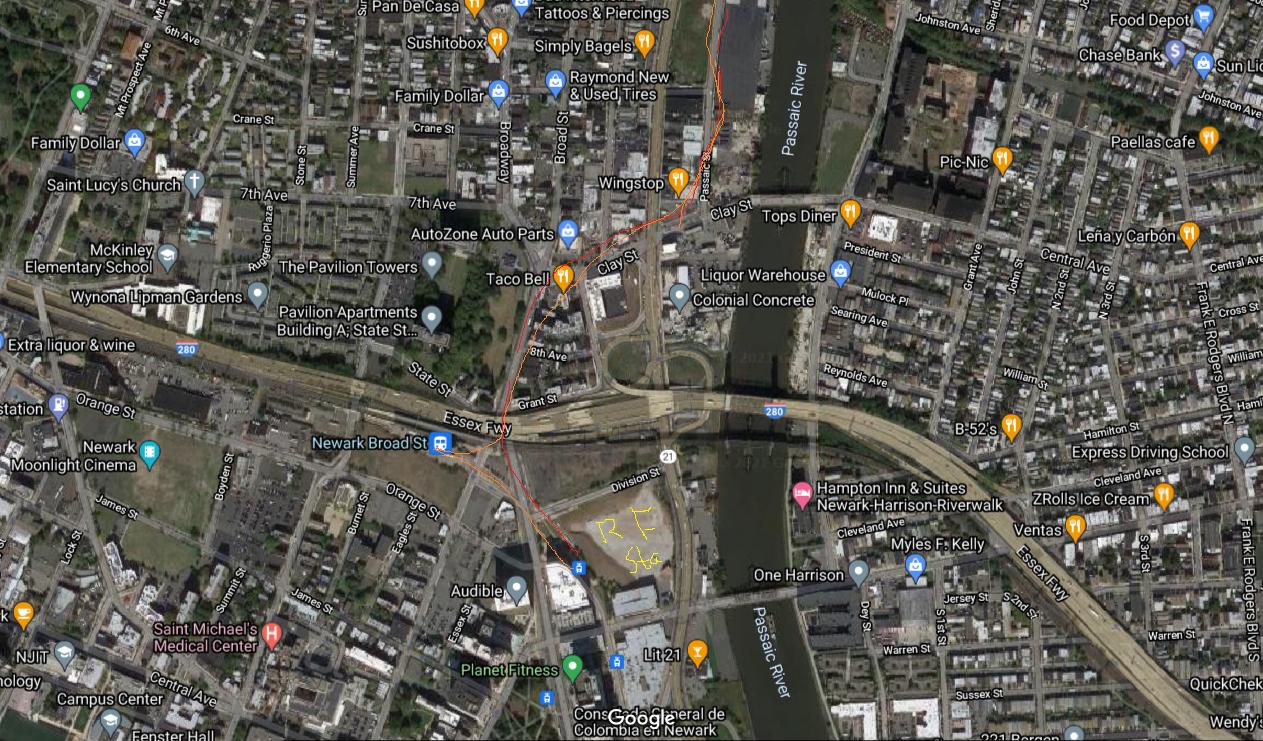 I didn't get into teaching for the promotions or the pension plans or so I could get to the golf course by 3:45. I did it because I wanted to help you kids. I'd forgotten that, till today. -- Principal Peter Prickly.

by njtmnrrbuff
Mon Sep 06, 2021 6:01 pm
Yes, if Phase I of the NWK-Paterson light rail plan gets built, NWK Broad St Station will have the light rail vehicles entering the station to drop off and pick up passengers and then backing out again. This practice is done with the Path trains at Hoboken on the weekends that are heading between Journal Square and 33rd St-Herald Sq. You can indeed walk from the Riverfront Station to Newark Broad St-just have to pay extra attention to the traffic. When you get off of a Broad St bound train at Riverfront Station and you are powerwalking to the NJT Broad Street Commuter Rail station, you have the benefit of walking parallel to the light rail vehicle as it crosses Broad St since auto and bus traffic stops.

As far as the plan for whether Riverfront Station should stay or go if Phase I gets built, that's interesting to think about. With the massive redevelopment project that is supposed to go up east of Broad St, it can go either way with whether to close Riverfront Station. Many people may want to save it but it's possible that it might really not be needed. What should be done is have a pedestrian underpass, a wide one, going underneath Broad St from the apartment and office complex to the other side of Broad St. This would prevent people from having to cross Broad St.

by lensovet
Tue Sep 07, 2021 10:11 pm
It makes no sense. It's 500 feet in either direction to the nearest station. If you think crossing Broad St is so dangerous, nothing stops you from walking 500 feet south to Atlantic St.

Also what a waste that stadium was. Used for less than 2 decades and sold at a loss to the developer together with tax abatements for redevelopment. Is that a worldwide record?
Paul Borokhov