by DutchRailnut
Tue Apr 21, 2020 5:58 pm
as someone said , even pig sty's are clean till you put pigs in them .
a car cleaner cleans on average 14 cars a shift , that is equal to 7 x 1600 square foot house .
besides picking up, sweeping , taking trash to container and mopping do you think such a person can do in 8 hours ?
If Conductors are in charge, why are they promoted to be Engineer???

by njtmnrrbuff
Tue Apr 21, 2020 7:52 pm
At least the great thing about the Shoreliners is they are still going strong and when I look at it, if they aren't replaced when we want them to, they will still operate fine. I don't hear too many complaints about the Shoreliners. MNR does great maintenance on its equipment. I'm sure whatever dual mode power MNR decides to order, CDOT will order its share in order for it to run in MNR pool service, just like the CDOT owned P32AC-DMs. I think those P32AC-DMs started running in the late 90s and early 2000s and they run quite well.

GirlOnTheTrain wrote: ↑Tue Apr 21, 2020 5:35 pm I would argue reliable motive power (and more motive power in general) is a priority over dumping the Shoreliners because they're "old".
....

Solve both problems: Stadlers. The fleet need, for Waterbury at least, is not huge. 3 sets, 6 cars. Outside of the maxi sets for the GCT/main line runs down to Stamford, I don't think Danbury needs that many sets either. 4 sets, 8 cars. Jaap I'm sure knows how many mini's are assigned to Danbury.

Push/pull for SLE and Hartford (i.e. "CTRAIL") makes more sense given the fact that the two-car sets (Amtrak) were full before the COVID shenanigans, and the three car sets seemed to be enough. I.e. "mini's" suffice for Hartford.
Next stop, Willoughby
~el Jefe ("Jeff Smith Rules") :: RAILROAD.NET Site Administrator/Co-Owner

by DutchRailnut
Wed Apr 22, 2020 7:41 am
Jeff I can guarantee you that CDOT will not go for DMU's just as Mr. Guiletti how he liked them, and you will get ear full.
in his career he got screwed with RDC's - SPV's - Colorado DMU and he is not going to get screwed a fourth time .
If Conductors are in charge, why are they promoted to be Engineer???

by Jeff Smith
Wed Apr 22, 2020 7:44 am
Didn't know that about him... and it's more a foamer fantasy anyway.
Next stop, Willoughby
~el Jefe ("Jeff Smith Rules") :: RAILROAD.NET Site Administrator/Co-Owner

by njtmnrrbuff
Wed Apr 22, 2020 10:20 am
I remember learning that CDOT had poor luck whenever it came to using DMUs. We had the unreliable SPVs that were used on the MNR branchlines in Connecticut. I remember they ran on the shuttles from Brewster North to Dover Plains. Whatever CDOT decides to order for replacement dual modes as part of the MNR pool, I'm sure that they will be able to accelerate better than the P32AC-DMs and that is important when trains are stopping every few miles. The BL20GH units have fine acceleration for a three car Shoreliner set. Acceleration of an engine isn't everything, although it's important. Having as many stations with high level platforms as possible helps. They are being built all over and many have been for a while. The Ctrail Shore Line East Stations are high level platform and that helps, especially since many of the trains running on that line use P40s as power. The stops are a little more spread out along Ctrail over the Metro North New Haven Line.

DutchRailnut wrote: ↑Tue Apr 21, 2020 11:31 am from a CDOT insider , the rumor about MBTA wanting cars back is false, the lease is good for close to 5 years and MBTA has not asked for cars back.

When is the lease supposed to end? This article from a couple of years ago says the MBB lease was signed in Dec 2017, and could run for a max of six years if it's extended, which would go up to Dec 2023. Was the agreement amended since then? If the M8s are not going to SLE after all, and if the MBBs have to be returned to Massachusetts before these new cars arrive, what will the Hartford Line use in the interim? I probably missed a detail along the way, somebody want to fill me in?

Anyway, it looks like some legislators/news outlets are framing CTDOT's 'mistake' as retaliation from the Lamont administration:

Republican legislative leaders charged Gov. Ned Lamont with retaliating against toll opponents after the State Bond Commission scrapped financing at the last minute for rail cars for the Waterbury and Danbury lines.

The administration countered that the change was due to a simple, agenda error. But Lamont also told critics that the state’s transportation program is running dry and legislators must address that.

“We don’t have an endless supply of bonding money,” the governor told Rep. Chris Davis of Ellington, a commission [State Bond Commission] member and ranking House Republican on the Finance, Revenue and Bonding Committee. “We had to make some choices and these were the choices we made.”

Melissa McCaw, the secretary of the Office of Policy and Management who is the governor’s budget chief, said that Danbury and Waterbury cars were postponed for now because the protracted squabbling over how to pay for transit improvements (the debate over tolls) has led to reduced funding availability.

The Waterbury line has a stop in the hometown represented by House Minority Leader Themis Klarides, of Derby, a vehement opponent to highway tolls.

...
DOT Commissioner Joe Giulietti said the cost per car is about $5 million, so the cutting of the Danbury and Waterbury money, which would have purchased another dozen cars, saved about $60 million. He said that rail cars along the Hartford line have been leased from Massachusetts and the state needs to replace them.

The Valley Independent Sentinel as well.

It looks like some of these news outlets are misunderstanding some of the numbers at play, but that's hardly surprising given how opaque CTDOT's communications are. It's also worth noting that CTDOT's original 'mistaken' description mentioned 72 cars for $300 million ($4.17 million per car), compared to the actual order which is 60 cars for $300 million ($5 million per car). During the meeting, some pols were understandably confused when it looked like the state was preparing to pay the same amount of money for fewer cars, but Giulietti clarified that an order of 72 cars would actually cost $360,000,000 which is consistent with the $5 million per car figure, and that was another mistake. 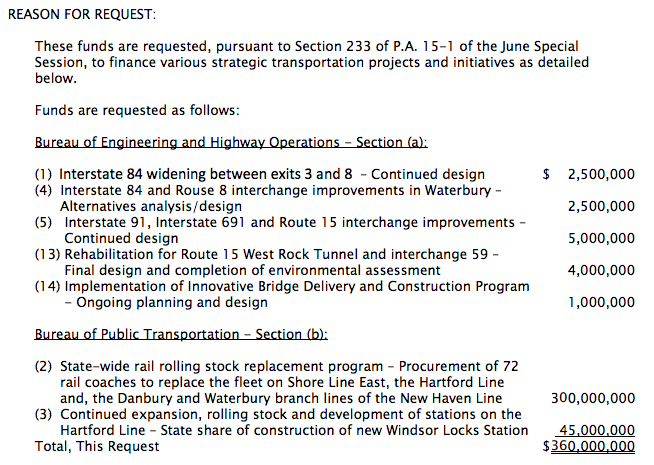 How much of this matter is CTDOT being incompetent and making a genuine mistake, and how much is malfeasance? Hanlon's Razor would point towards the former, but you never know. While I'm sure Lamont's political opponents wouldn't miss a chance to get a shot in at him, valid or not, it looks like CTDOT has certainly angered genuine Waterbury/Danbury branch advocates.

by Backshophoss
Fri Apr 24, 2020 6:22 pm
Treat the The MN pool cars and SLE/NHHS as 2 separate fleets in the same state, Danbury and Waterbury are under MN control.
CT Rail is under ConnDOT's direct control.
The ConnDOT owned SPV's' were factory equipped with 4 powered axles,that created a" Crew issue"(fireman),solved by disconnecting
2 axles.
That why "lizze""(CDOT 50) had fits with the Danbury branch grades.
The MN SPV's did OK om the Hudson Lne with 2 powered axles(from the factory),but were unhappy on the Harlem line Brewster-Dover Plains Shuttle
The Land of Enchantment is not Flyover country!

Other than buying the MBB coaches outright, the only other single level equipment I see on the open market are SEPTA's single level coaches, which are due for replacement soon. They are likely low mileage for their age, given push-pull equipment is weekday only.
Since my friend continues to chain smoke nonstop, she is probably an Alco.

by njtmnrrbuff
Fri Apr 24, 2020 9:07 pm
Last I heard a couple of years ago, the Septa Comet Sets won't be replaced in the short term. Time will tell what will happen to them when the new bilevels enter revenue service. Hopefully in a few years, we will see brand new rolling stock for Ctrail operations and it may be a little longer until the Shoreliners are replaced. It does make sense to keep the CDOT owned coaches and cab cars that run in MNR service the same as the MTA painted ones so that way, they can travel all over the MNR East of Hudson System.

by Backshophoss
Sun Apr 26, 2020 6:49 pm
SEPTA's fleet was not maintained were "rebuilt" by Rotam, and had the bathrooms "blanked out".
The Land of Enchantment is not Flyover country!


...
Make no mistake, there is plenty of reason for outcry. The price paid, $5 million per car, is outrageous, especially for units without their own propulsion. Half that amount should be buying diesel multiple units (DMUs), trainsets with a diesel engine powering each car. DMUs accelerate and brake way more nimbly than traditional trains composed of cars hauled by a diesel locomotive; on lines with lots of curves and stops, such as the Danbury and Waterbury branches, they would save precious minutes on each trip.

The reasons why the state is on track to pay double what it should for inferior equipment need to be investigated.

However, 60 cars, self-propelled or not, should still be enough to increase service on all four branch lines. That is sorely needed; today, trains come every hour or better only during rush hour on the Hartford Line and Shore Line East. One-way trips on the Danbury Branch (South Norwalk-Danbury), Waterbury Branch (Bridgeport-Waterbury), or Shore Line East (New Haven-New London) each take just over an hour with today’s slow equipment.

Three-hour round tips on each of those lines should be easily doable, with New Haven to Springfield and back requiring four hours. Dividing each round-trip time by a frequency of one train per direction per hour gives a total of 13 trainsets needed to give all four branches one train per hour each way. If we add one extra set per branch to total 17 sets, there should be enough cars to give each set three cars. The added frequency should help cancel out the potentially decreased train lengths.
...

by njtmnrrbuff
Tue Aug 10, 2021 8:32 pm
Any updates yet on the brand new equipment order for CDOT Ctrail services?