by NS VIA FAN
Mon Mar 09, 2009 6:15 pm
I was in Montreal last month on business and after finishing early on Thursday I decided to add a couple of vacation days for a long weekend and a chance to ride VIA’s “Saguenay” to Jonquiere. But first......time to sample a couple of AMT’s (Agence Metropolitain de Transport) commuter lines.

First, the Candiac line. AMT recently acquired some additional equipment from New Jersey Transit which has allowed them to expand schedules and add new trains including a new mid -day train and an opportunity to sample the line with a quick round-trip to Candiac. Previously the service had been rush-hour only. I boarded at Lucien-L’Allier which is located on the approach to the former CP Windsor Station. The train consisted of an F59 (pushing) and four coaches including a cab-car and one xNJT Comet. We followed the CP line out to Montreal West then diverged onto the Adirondack Subdivision. This was once the route of CP’s Atlantic Limited and the D&H trains to New York. I rode in the xNJT car and other than adding signage in French, nothing has been done to the cars. It took about 45 minutes to reach Candiac with a quick turnaround and we were back downtown “Centre-Ville” at 13:45. 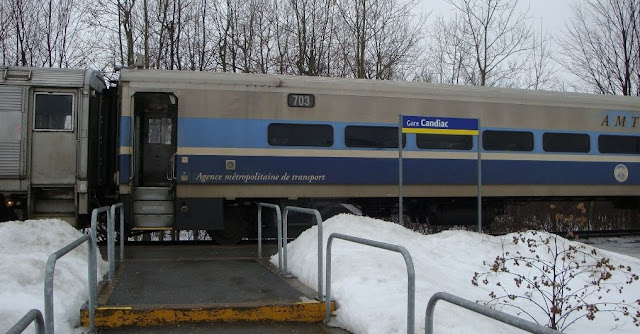 Next up: a ride to Blainville. This time on the former CP route to the Laurentian Mountains. Train left at 15:35 and the consist was made up of an F59 pushing xGO Transit low level cars. This is a scenic ride with a couple of bridge crossings before reaching Sainte-Therese where we made a wide sweeping turn and started to climb up onto a ridge with a view back towards Montreal 30 km away. Then onto Blainville where the crew changes ends on the push-pull consist and head back to Laucien L-Allier after 15 minutes. We met a northbound bi-level at Sainte-Therese and arrived back in Montreal at 18:15.

I was staying at the Fairmont Queen Elizabeth, a former CN Hotel located directly above Central Station so when I checked out on Friday morning I just took an elevator down to the station Concourse level. My train the “Saguenay” to Jonquiere (sounds like Jon-key-air) was boarding in about 15 minutes but I was surprised to see only about 10 other passengers waiting besides myself.......and this actually for two trains as the “Saguenay” runs combined with the “Abitibi” to Senneterre as far as Hervey Jonction. When we were let down to the platform I walked forward for pictures and recorded the consist: 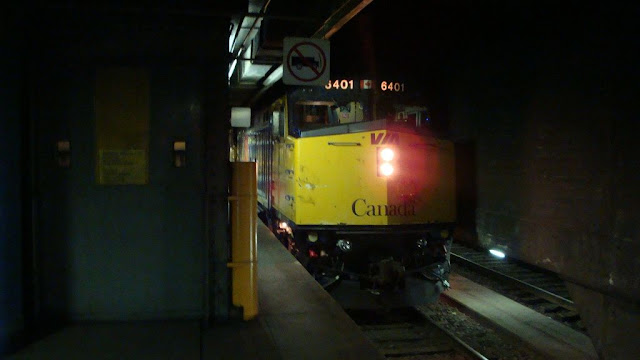 Departure was on time at 8:30 am, making a wide loop west then northeast around Mount Royal. Prior to the rebuilding of the CN (now AMT) electric suburban service in the 1990s, trains to northern Quebec were hauled out of Central Station through the 3 mile Mount Royal Tunnel by ancient electric box cabs. Today’s route adds about 15 kms, skirting around the mountain not through it. We crawled through Taschereau Yard and made a couple of suburban stops to pick up passengers and by the time we left Montreal Island 50 km later, we were about a half hour late. It was a sunny day after a fresh snow and just nice to sit back and enjoy the scenery as we got closer to the Laurentian Mountains.....and quite scenic too crossing several river valleys on high trestles. The long-distance HEP1 coach was the same as you would find on the Canadian or Chaleur: wide spacing with leg and foot rests and very comfortable. The Service Manager also served a great cup of coffee along with sandwiches from a small snack-bar at the front of the coach. We continued to expand our passenger count making several more stops at small well kept stations and most with an agent and for only one train a day! (north one day and return the next).

At Hervey Jct. the train splits: F40 #6401 uncouples and pulls forward onto the La Tuque Subdivision. The train is also split between the baggage cars. After we depart with 6453 now leading, 6401 will return and couple to the remaining cars and head for Senneterre.

Now onto Riviere-a-Pierre and as we approach the stop the Service Manager comes through and asks us to move items off adjacent seats as he says he is going to need every one. The roads end here and the station parking lot was packed. It’s Friday afternoon and many were heading off to a weekend at their camps, cabins and some pretty nice chalets in the woods. The train is their only access. The baggage car door is opened and the supplies are loaded: boxes of groceries, cases of beer, skis, backpacks etc.

Everyone is speaking French but when my new seatmate realizes I only speak a few words, immediately switches to English and we have an interesting conversation about the local area. Some passengers are only aboard for a few minutes before we begin stopping.....sometimes at a small shelter or only a milepost sign. Some stops are very close, Pearl Lake and Hirondell for example are both within KM 323 and a minute apart. This is a real personalized service with most people telling the Service Manager to be watching for them returning Sunday afternoon. At Stadacona we are met by several Skidoos from a camp across a lake. Several get off and unload their supplies from the baggage cars. The rest of the afternoon is spent following a winding white-water river or deep in the bush. (This would be a nice trip in the summer or especially in the fall with all the maples and birches in autumn colours) 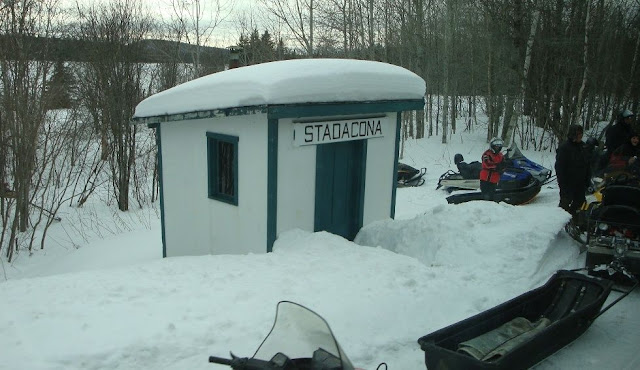 But we are out of the woods near Chambord just as fast as we entered and into the open fields of an agricultural area surrounding Lac St. Jean. We followed the shoreline of the lake for awhile (it’s about 30 km across) then on into the Saguenay Region which Jonquiere is a part of. Population 150,000. Its an industrial area of hydro-electric developments, aluminum manufacturing and pulp & paper.

It was just getting dark as we arrived in Jonquiere at 5:50..... about a half hour late at a very modern station with a covered platform and part of a transportation centre shared with the local transit authority. It was starting to snow so I just grabbed a taxi to the Holiday Inn. 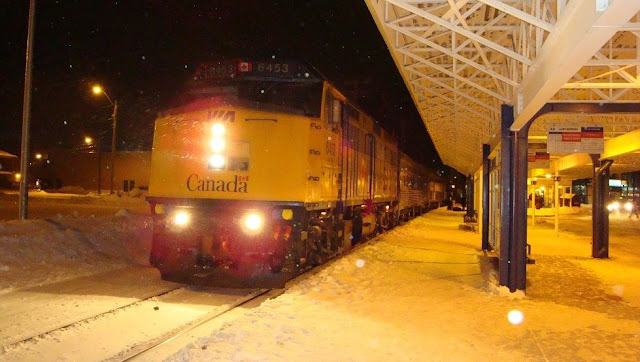 VIA’s “Saguenay” doesn’t return to Montreal until Sunday afternoon so Saturday morning I decided to take the bus to Quebec City then VIA to Montreal. “InterCar” provides frequent bus service and the modern Prevost model coach was very comfortable for the 3 1\2 run, arriving at VIA’s beautifully restored Gare du Palais in Quebec City. The station is shared with inter-city busses and I have about an hour wait for VIA #25 to Montreal. 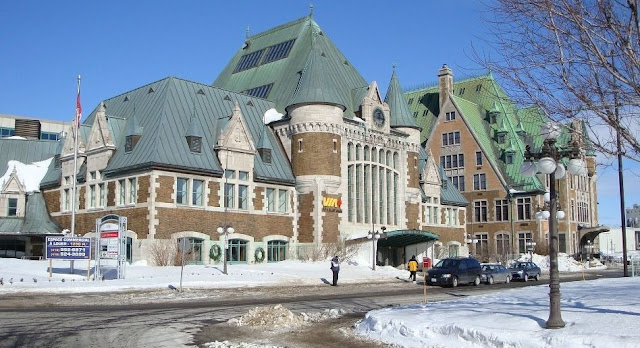 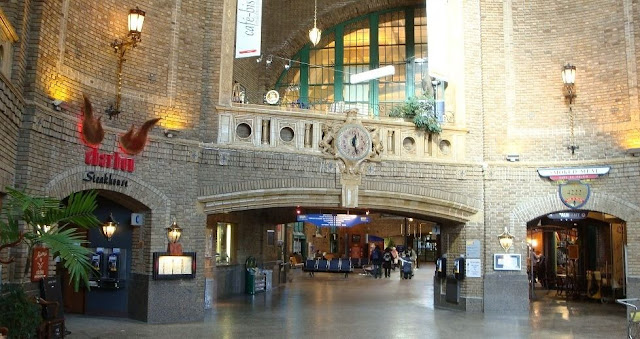 A large crowd boards the Renaissance consist at 12:50 and we’re away on time at 1pm. The train included an F40, VIA-1 First Class car, Service Car and 3 Coaches. Seating layout in both the VIA-1 car and the coaches is 2 seats on one side of the aisle and a single seat on the other. Very comfortable and with a huge tray-table for my laptop. Wireless Internet is available (for a charge) and meal service is from a trolley, airline style. 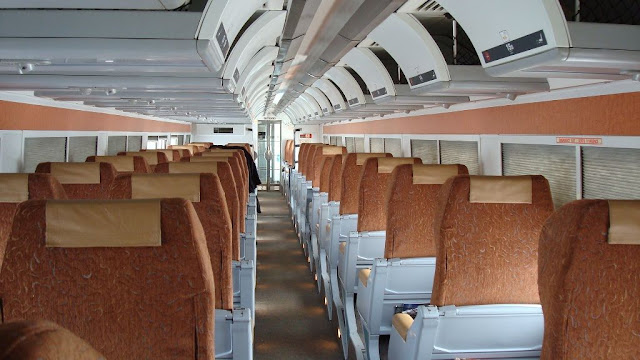 Out through the suburbs then across the St. Lawrence on the Quebec Bridge. We run parallel to Autoroute 20 for about 30 kms. I had my GPS and watched as we overtake everything doing a steady 95+ MPH (railways still use miles in Canada) But near Val-Alain there are problems with the CN signal system and we crawl for several minutes. Arrival into Montreal is about 20 minutes late. Again I’m staying at the Queen Elizabeth Hotel so it’s an easy ride up the escalator to the station concourse then into the hotel elevator: I’m in my room within 7 minutes from train stopping. 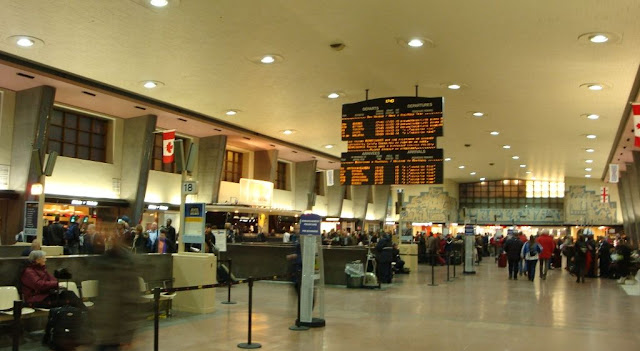 by 3rdrail
Mon Mar 09, 2009 8:03 pm
Great circle-trip and I enjoyed your interesting account. I haven't been to Montreal since 1987, but though that you'd enjoy these from Windsor and Central Stations;

3rdrail wrote:Great circle-trip and I enjoyed your interesting account. I haven't been to Montreal since 1987, but though that you'd enjoy these from Windsor and Central Stations;

Thanks for the pictures...... A typical January in Montreal and my favorite time to visit. (It's usually tied in with a ski trip to the Laurentians)

by Tadman
Wed Mar 11, 2009 1:30 pm
Great story - if you can find it, PTJ ran a story about 15 years back about the Abitibi and Sagueney, when they were the last two trains in the system that ran with the steam heat cars and FP9's. I've wanted to ride those trains ever since then. I think at one time the Abitibi ran all the way to Timmins, where it connected with Ontario Northland.
Dig the new rr.net Instagram account: @railroad_dot_net

Tadman wrote:Great story - if you can find it, PTJ ran a story about 15 years back about the Abitibi and Sagueney, when they were the last two trains in the system that ran with the steam heat cars and FP9's. I've wanted to ride those trains ever since then. I think at one time the Abitibi ran all the way to Timmins, where it connected with Ontario Northland.

The connecting point between CN and Ontario Northland was in Cochrane and back in 1974 I did just that! Here’s the consists from the trip:

In 1974, CN#75 the ancestor of today’s Abitibi ran between Quebec City, Senneterre and Cochrane and exchanged cars at Hervey Jct with the Montreal-Jonquiere-Chicoutimi train. (Except the night I rode!....There was a railroad strike isolated to the Montreal area and through cars from Montreal to Senneterre were not running) 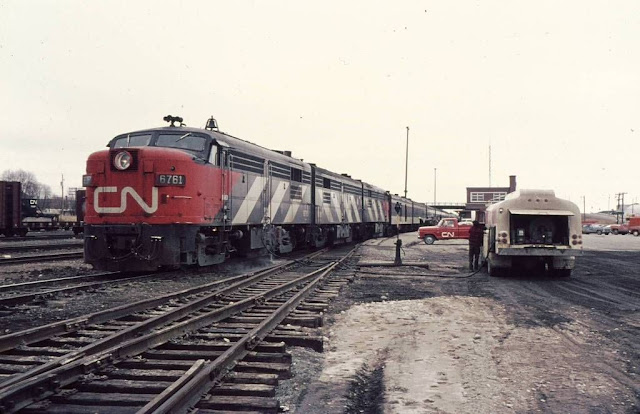 CN#75 had departed Quebec City at 10pm the previous evening and arrived in Cochrane, 575 miles later at 6:15pm.....just in time for supper at the station lunch counter. Then I boarded the Northland at 7:30pm which went through a colourful transformation during the night before arriving in Toronto at 7:25 the next morning.

by Noel Weaver
Mon Apr 25, 2011 11:18 pm
In October, 1985 I rode round trip from Montreal to Chicoutimi with an FPA-4, baggage car, snack bar coach and coach. Really neat trip, I rode the engine for much of the return trip to Montreal. The line was abandoned to Chicoutimi not too long after this trip.
In October, 1990 I rode Montreal - Senneterre - Cochrane then Cochrane - Toronto via the ONR. Two GM "F" units, baggage car, coach, snack bar coach and a sleeper as this was still a night train out of Montreal at the time. At this time it was only possible to do this trip on a Friday out of Montreal and at Senneterre the entire train went through to Cochrane although they only used one coach. It was a long and slow ride out of Senneterre but I had about 45 minutes there for a good Canadian Breakfast. Got a couple cans of soda for the long ride to Cochrane and they kept cold in the vestibule. When I got to Cochrane it was pretty cold and there was snow on the ground. The ONR to Toronto that Sunday was a classy ride and I enjoyed the entire trip. They dragged the entire train to Cochrane to save on much switching at Senneterre. Much of the ride beyond Senneterre was at 15 MPH with only one train a week over a portion of this line. I rode the sleeper out of Montreal but was awake at several key locations.
Montreal to Toronto the long way.
Noel Weaver