About a month ago on the MDN, I could *swear* that I walked through a car that had electrical outlets between at least a few of the seats. What actually got my attention was a small bit of signage as I entered the car, something to the effect that the outlets were provided for passenger use and blah blah. As I was walking through the car (I walk to the head of the consist in the direction of travel in the morning, as I need to hop off the first car at Libertyville to catch a connecting bus), I took note of a few electrical outlets in what appeared to be a newly-remodeled car. It reminded me of my Amtrak/LakeShore Limited days, when I would enter a car that had obviously just been overhauled, based on how new and shiny everything was.

I haven't posted about this sooner because I wanted to see the car again and make note of the number.. but I never saw it again and I've started to wonder if I just dreamt it or something. (Similiar to that Ray Romano routine, where he talks about how when you get older, you can't remeber if something was real or a dream: "Honey, did we see your mom at the store yesterday? We did? Ok good.... was her face made of pudding? No? Ohhh, ok, *that* part was the dream part, ok.")

Anyone? I wish I had more info but this is all I remember.

Gare
'In the depth of winter, I finally learned that within me lay an invincible summer'

by JLJ061
Mon Feb 27, 2012 3:41 pm
I have on numerous occasions browsed (but never seriously looked) for an outlet on Metra trains where I could recharge my batteries, but never successfully found one, except for in the restrooms.

I think it's a feature that Metra should seriously look at, especially in this electronic age; Maybe not at every seat like Amtrak is now doing, but at least 4-5 outlets per car should be available.
Jamie Joyce

Ok... did I dream this or did it really happen?

It's real, alright - I rode in newly rebuilt coach #7449 last week on the MDW, and they had outlets every few seats exactly as you had described. I certainly was not expecting to see that.

Another noted difference as well: 7448 received new, "flat" flooring material like the 6000/8500 series Nippon Sharyo cars, whereas 7449's existing floor with ridges down the aisle was retained during its rebuild. 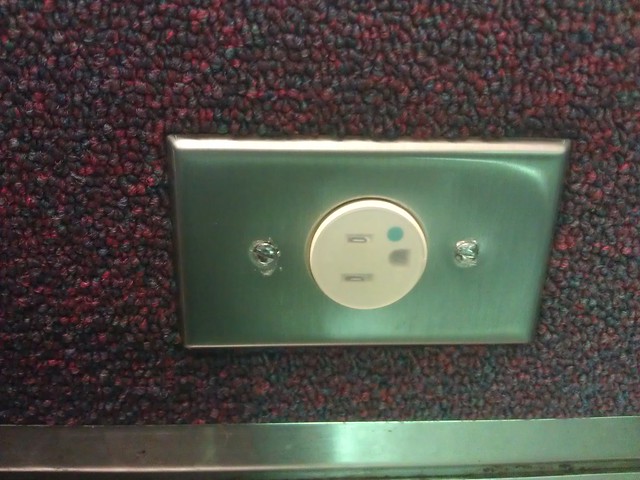