Release coincides with announced $80 billion over 8 years in President Biden’s American Jobs Plan, but will depend on legislative remedies from Congress 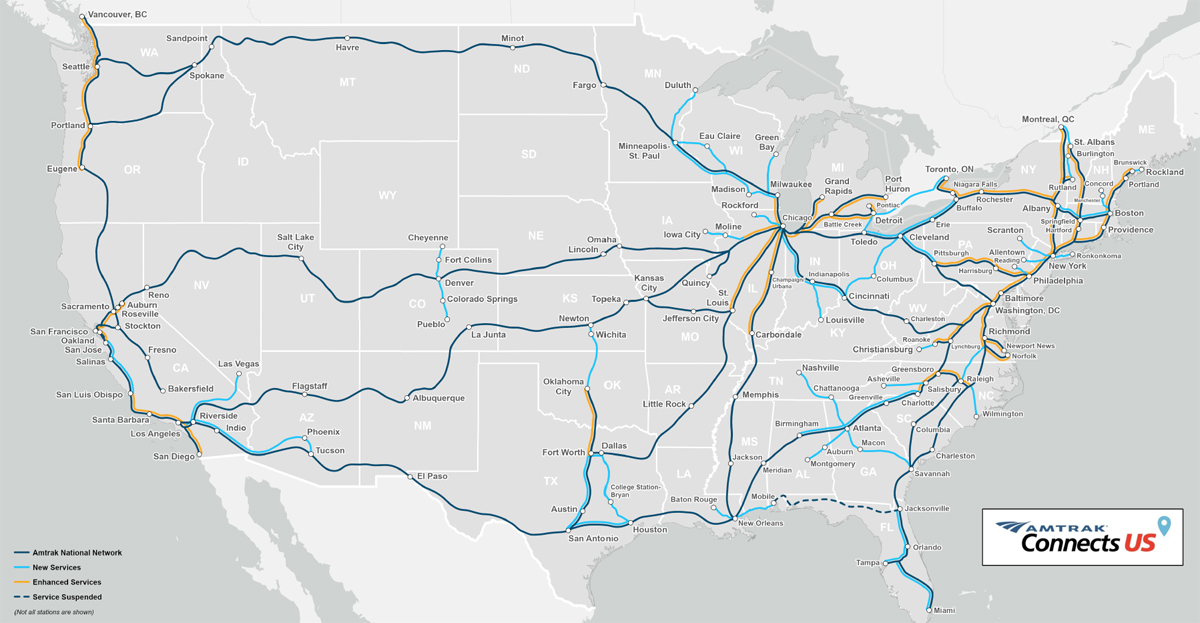 by Greg Moore
Thu Apr 01, 2021 7:32 am
This is so far mostly jut a press release it looks like, but, it's perhaps among the most optimistic things I've seen in awhile from Amtrak and with backing from this administration, I can see parts of this getting started.

That said, there are still to me, some curious gaps.
For example, if you're going to expand along the Front Range, might as well continue SOMETHING to Southwest Chief and probably end in Albuquerque.

It's also not entirely clear to me what New Service vs Enhanced service is in some cases.
For example, Albany to Buffalo is Enhanced Service, but Buffalo to Toledo is New. I'd assume both means more frequencies but what's the difference?

(I'm going to guess that ALB-BUF is extending existing Empire Service trains with them terminating in BUF, but BUF-TOL is simply new trains between those points.)

I don't think this is perfect, but it's a start and appears to show a strong emphasis on increased corridor service.
Check out QuiCR, Quick, Crowdsourced Responses for businesses.

by njtmnrrbuff
Thu Apr 01, 2021 8:13 am
I like this! The new route ideas are certainly great. For the routes that are planned to run from NYC to the Lehigh Valley Region and Scranton, those will probably not happen soon at all. First off, track capacity on the NEC between NYC and NJ must be expanded. The tunnels need to be built and the existing ones need to be rehabilitated. There would have to be track capacity improvements on NJT's Morris & Essex Line too such as a third track through Harrison and across the Newark Draw Bridge. The former Lackawanna right of way west of the Delaware is very curvy in many spots north of E. Stroudsburg up to Scranton. As for service to the Lehigh Valley region, a third track is a must on NJT's Raritan Valley Line, even if it went as far as Plainfield. I believe that west of High Bridge, the present end of the Raritan Valley Line, the right of way didn't have as many sharp curves as the former Lackawanna Pocono Line.

Greg Moore wrote: ↑Thu Apr 01, 2021 7:32 am That said, there are still to me, some curious gaps.
For example, if you're going to expand along the Front Range, might as well continue SOMETHING to Southwest Chief and probably end in Albuquerque.

I hear what you are saying about extending the Front Range Corridor to Albuquerque, but there isn’t much between Pueblo and Albuquerque. It would make more sense to extend a frequency or two to La Junta to meet with the Southwest Chief.


It's also not entirely clear to me what New Service vs Enhanced service is in some cases.
For example, Albany to Buffalo is Enhanced Service, but Buffalo to Toledo is New. I'd assume both means more frequencies but what's the difference?

I think the new services are all new corridors, instead of new frequencies of the Lakeshore Limited along Lake Erie or the Silver Services in Florida. It looks like all the enhanced services are existing corridor trains like the Keystone Service or enhanced frequencies on day trains like the Adirondack, Heartland Flyer, Pennsylvanian, or Vermonter. I personally think that the new service along Lake Erie is actually a Buffalo/Erie/Toledo/Detroit corridor. That makes a lot of sense; it was bizarre to have to go all the way into Chicago or transfer to a bus if you wanted to get to Detroit from Cleveland.

I love that they’re even talking about bringing back the International or Kentucky Cardinal.
"I know nothing, nothing..." - Sgt. Schultz

by STrRedWolf
Thu Apr 01, 2021 8:30 am
Hmmm... this has some similarities to a planned route for my next Throng train novel. Anyone know any good map plotting software that knows train line routes?
Train? Can we, Killer? Can we?
http://throng.band

"For those tuning in late", NGS was the "W-Gang's" brainchild where circa 2K, they were going to start a "slew" of frequency increases and even new routes - all were built around the "Mixto Diarios" (freight - whoops Express - business spearheaded by none other than Ed Ellis).

The routes included NY-LA bypassing Chicago (probably over the PRR bridge and interchanged with the Q at Halstead St) and a host of others. One of such actually ran; the Lake Country Limited Chicago-Janesville, WI. Amtrak/Ellis had "visions" of handling auto parts to the GM plant at Janesville. Only problem; GM shut the plant down. He did pick up one customer up there; a cat food producer. Learning of that, around here the train picked up the name "Friskies Flyer". The consist was one Horizon and one Boxcar.

Another one, Skyline Connection, Phila-Chicago, on roundly the Manhattan Ltd WW and the Pennsylvania Limited EW schedule, made it into the System Timetable with the notation "service to begin on a date to be announced".

Funny thing is that Joe's "Trillybuck" infrastructure initiative, while envisioning "Billiebucks" for rail, does not envision new routes for Amtrak. What funds eventually appropriated from such are to go what counts - Corridors!

by markhb
Thu Apr 01, 2021 9:38 am
They probably don't want to preemptively expand the Basic Network, or maybe they don't want to give Mitch McConnell anything for free, but I notice that they're discussing Chicago-Louisville and Nashville-Atlanta-Savannah, which leaves 176 miles of mostly Kentucky to connect the two. Louisville's going to need a new station anyway since the old Union Station, while it still exists, is no longer served by RR tracks.
"...And then I thought, every time some company creates a more powerful locomotive does Superman become more powerful as well or is he stuck at 1938 locomotive power levels?" - A friend of mine elsewhere
Anything I post here is mine alone and does not represent the views of my employer.

by Arborwayfan
Thu Apr 01, 2021 10:21 am
More trains on existing routes (whatever name they call it) makes those routes more useful and more attractive. I wonder how many trains a day a city needs before the ease of taking the train to nearby cities starts to make people consider having just one car per family, or no car? Obviously local public transit, local road congestion, local bike and walking infrastructure, local cabs and rideshares and ZipCars, and the cost of parking will be the main factors in someone deciding to live without owning a car, but at some point being able to take typical trips by train will factor in. And once we have people in a city who don't have one car per adult, our potential trainrider market is much bigger, because those people aren't comparing a train fare to gastollsparking, but to airfare or to car rental plus gastollsparking.

Off and on I wonder whether a version of the Mail-and-Express initiative that cooperated with willing host railroads instead of appearing to compete with them might work on some routes. Maybe there's some LD route where the host RR or RRs could be convinced to appreciate the chance to send ten or twenty double-stack cars a day out on the back of an Amtrak train, and work out some reasonable cost-sharing and power-pooling scheme. That would give the host RR an incentive to let the train run on time, and also let it use part of that train's slot for freight. But maybe that many intermodal cars (with the additional cost of a switching movement every day to get them from the Amtrak terminal to the nearest intermodal terminal) would be too few to make sense for moving freight and too many for efficient passenger train movements. I know some western RR hauled priority piggback freight behind one of it's passenger trains for a while in the 60s; I don't know if it worked then, and now intermodal terminals are much more specialized than they were then.


I rode the Three Rivers once and kind of enjoyed the huge string of boxcars and roadrailers on the back. Certainly impressive on Horseshoe Curve.

by TurningOfTheWheel
Thu Apr 01, 2021 10:39 am
The more I look at this map the more I dislike it. Such curious and easily fixable gaps. No service from Mobile to Montgomery? No service from Chicago to Nashville? And, of course, none of the Amtrak components will actually be HSR despite Biden campaign publicity that leads people to believe the contrary. All told, it's an optimistic but highly flawed document.


STrRedWolf wrote: ↑Thu Apr 01, 2021 8:30 am Hmmm... this has some similarities to a planned route for my next Throng train novel. Anyone know any good map plotting software that knows train line routes?

I have a Google My Maps file that I use to catalog my fantasy vision for the US passenger rail system. Not automatic but it's easy enough to plot lines along a train route.

STrRedWolf wrote: ↑Thu Apr 01, 2021 8:30 am Hmmm... this has some similarities to a planned route for my next Throng train novel. Anyone know any good map plotting software that knows train line routes?

I'm pretty sure this map integrates CAHSR, the texas HSR, and brightline with amtrak services.


ALBANY, N.Y. — How about a train ride from New York City to Scranton, Pennsylvania, Phoenix to Southern California or expanded service from Pittsburgh to Philadelphia?

Amtrak late Wednesday released a proposed map of new and expanded service if it can land the $80 billion proposed by President Joe Biden as part of his American Jobs Plan, a massive $2 trillion plan to rebuild the nation's aging infrastructure.

Amtrak has long been beleaguered by financial woes and desperately needed upgrades, making the quasi-public corporation unable to expand and improve service and causing it to become a regular target of criticism for slow and unreliable service.
...
Amtrak displayed a vision of adding service from New York City to Scranton and Allentown in Pennsylvania and a route from Manhattan to Nassau County on Long Island.

New service would also be added to major cities that currently have no Amtrak service, including Las Vegas; Nashville, Tennessee; Columbus, Ohio; and Phoenix.
... 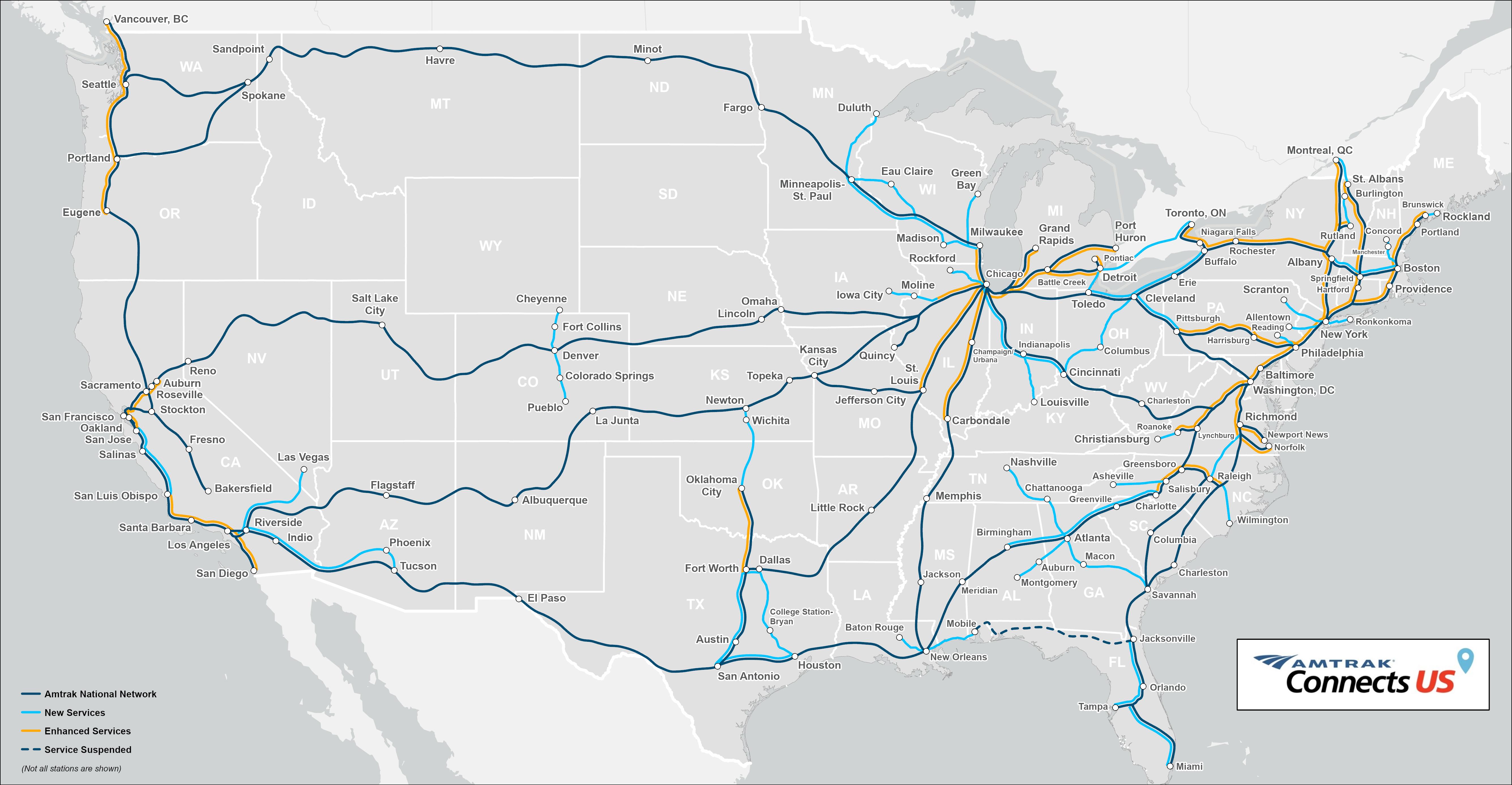 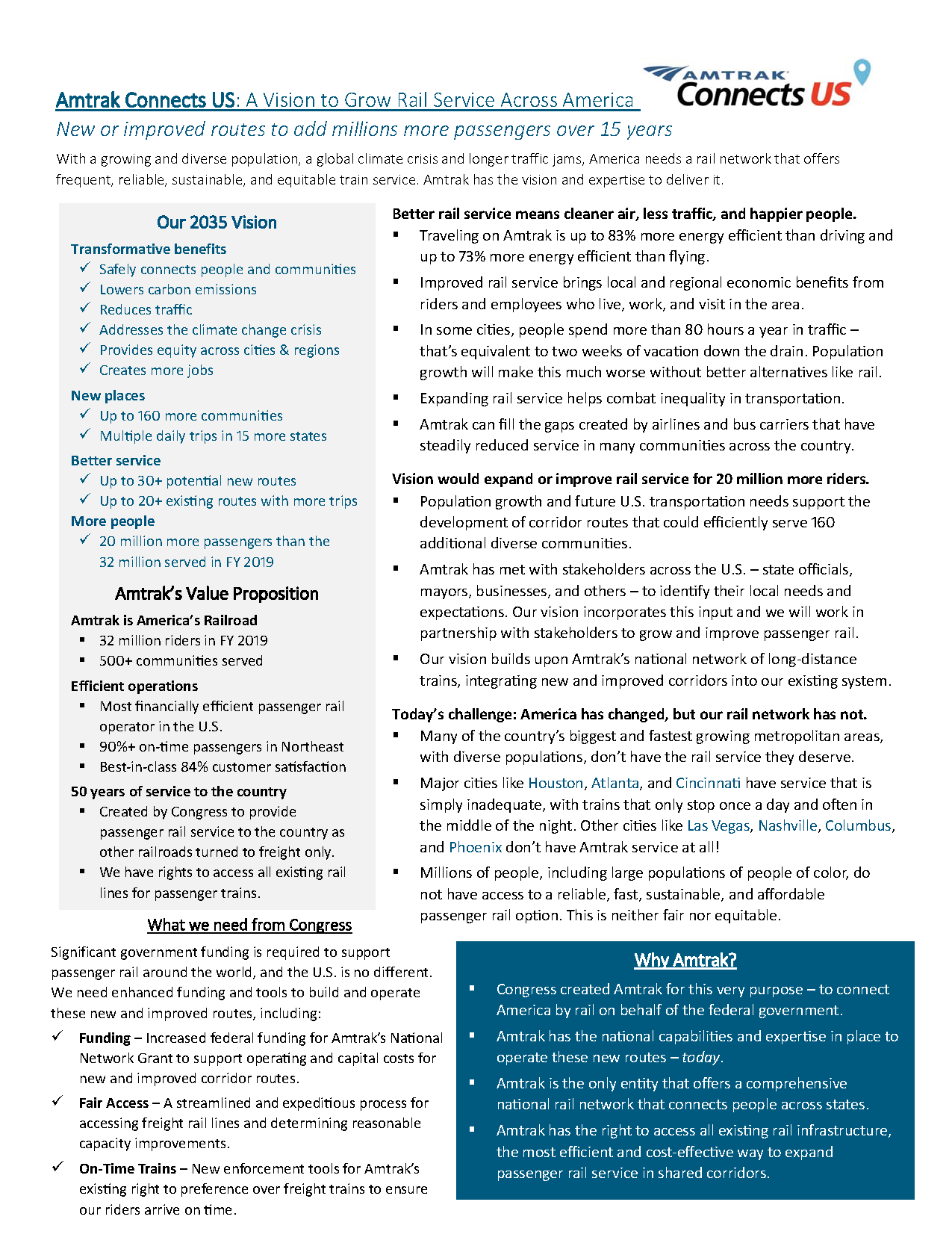 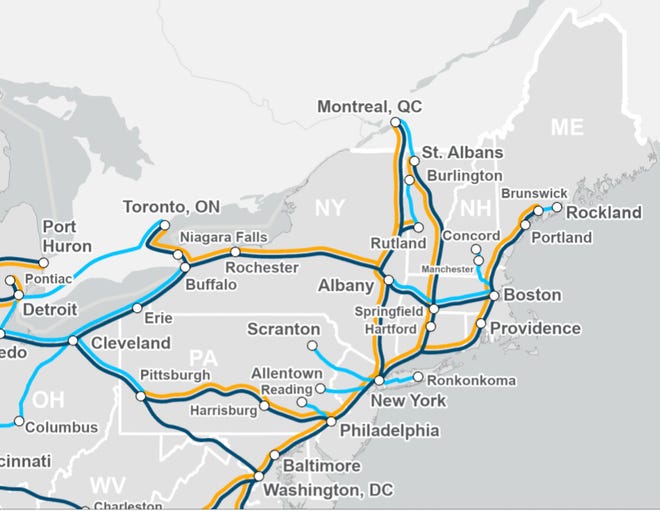 I have two thoughts on some of the gaps.
Gaps in networks like this can hurt more than obvious because they limit the ability to change trains and connect to other spots in the network.

Basically dead-ends require enough traffic to the point to make it worthwhile, but extending it can add the ability for more travel. Picking the one I mentioned, it's not that suddenly lots of folks from Denver will want to go to La Junta, but closing that gap suddenly means folks in Denver have a lot more places to go without having to go to Chicago first.

But I also noticed the Kentucky gap and started to think about the comment above and realized: I wonder if the person putting this together has a little more political savvy than we see sometimes. In other words I can see a certain Senator from Kentucky saying, "Ok, fine, I'll support this, BUT, I want my train too." i.e. you give him a reason to fight for it. If that gap had been presented as closed, the argument would have flipped as "ok, I like this but let's eliminate these routes I don't like."

That said, I do think several of the new "dead-ends" make sense at this time. They become feeders (like into Atlanta).

I think 14 years is ambitious for all this to happen, but honestly, if anything, I think this should be considered a Phase 1 and see where improvements can be added (like closing some of the gaps that have been pointed out).
Check out QuiCR, Quick, Crowdsourced Responses for businesses.