What's the latest on the siding at Catawissa?

I'm glad someone got around to posting this up on the PA forum. It was my intention to do as I had done on the NYS forum, but I haven't had the chance to get to it!

To answer your question, the siding at Catawissa is currently in the planning stages between NS and CP engineering officials. From what I was told, the hope was to have the siding in service by the end of this year but it sounds like it will more likely happen next year. Still no word on the exact location, however it is supposed to be a 10,000' signalled controlled siding just like the Sidings at New Milford, Dalton and Hanover. This will really improve operations South of Dupont. Even with the 6 or so trains a day now (with more to come), trains can take up to a 45 min to 1 hr delay waiting for another train at Banks and or Nescopeck.

Additionally after a recent day railfanning the Sunbury Sub between Binghamton and Nescopeck, I observed a good bit of new welded rail layed out in a number of locations along with large piles of new tie plates and spikes. The most significant amount of rail I saw dumped was at Hop Bottom (CPF 648). It appears as if they are finally going to do a much needed upgrade on that section of the railroad, maybe finally to knock off the 25 mph speed restriction b/w 648 and 650. It still amazes that the Sunbury Sub still has about 10 or so miles of jointed rail on the segment between Buttonwood (M.P. 692) and Hop Bottom (CPF 648). It would take about 1 rail train worth of CWR to get rid of all the jointed rail, but it still hasnt happend (just my 2 pennies though)...

From what I was told, also look for a tie project and some surfacing/ballast and regulating work this season as well.

In theory (with PTC requirments approaching quickly) CP should be starting on the CTC (PTC) project on the Sunbury Sub this year as well, but I have heard nothing about it yet.

For anyone interested, I have a yahoo group dedicated to the CP Sunbury Sub. Heres the link if anyone is interested in joining and learning more about the line: http://groups.yahoo.com/group/cprsunburysub/ .

by 2nd trick op
Thu Mar 24, 2011 6:33 pm
A 10,000 foot siding would either involve the Route 42 highway crossing in downtown Catawissa, or extend about 4000 feet further north from the former RDG rail crossing/NORCA Block Station, (opposite the Susquehanna bridge to Rupert). My money would be on the latter alternative, to avoid either fouling the crossing or likely having to cut for it. Clearances might also be a problem; this is one of the portions of the PRR Wilkes-Barre Branch which was never double-tracked.

Also, it's interesting to speculate whether additional capacity on the Sunbury Sub might allow return of some unit coal traffic to Mt. Tom and Bow; this stuff has apparently been routed via a number of options over the years.
What a revoltin' development this is! (William Bendix)

Feast your eyes, everybody!

http://www.flickr.com/photos/swhipple/5560815411/
What a revoltin' development this is! (William Bendix)

by frank754
Sun Mar 27, 2011 7:54 pm
The third photo looks like North Wilkes-Barre, been there and recognize the red weed tips. I'm a fairly new resident in W-B, but haven't visited the south trestle yet mentioned in photo 2. Will have to figure out exactly where to go to see it. Good stuff.
Here's a photo of the north end bridge I took on 12/27/10 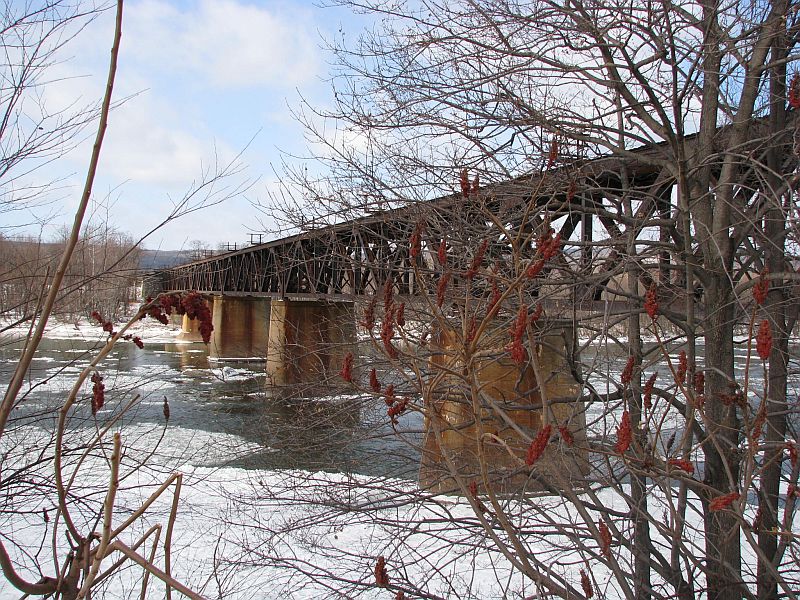 from this page I posted (mostly for L&WV remains at the site)
http://viewoftheblue.com/photography/nwb.html