by TDowling
Fri Jul 29, 2016 10:14 pm
That, and the fact that they might make permanent direct weekend service from HOB to WTC.

trainbrain wrote:So the new PATH station will have 6 tracks when fully complete, but only 3 are used now, and it appears that the system is running fine with those 3 tracks. Hoboken trains use track 1 and Newark trains use 2 and 3. When complete, what trains will use tracks 4, 5, and 6? Are they just to increase terminal capacity to run more trains to the existing destinations?

The original plan for the temporary post-9/11 WTC station was for 6 tracks, but only 5 were actually built. You can see this on this June, 2003 photo of part of the model board (when it was at Exchange Place, in public view): 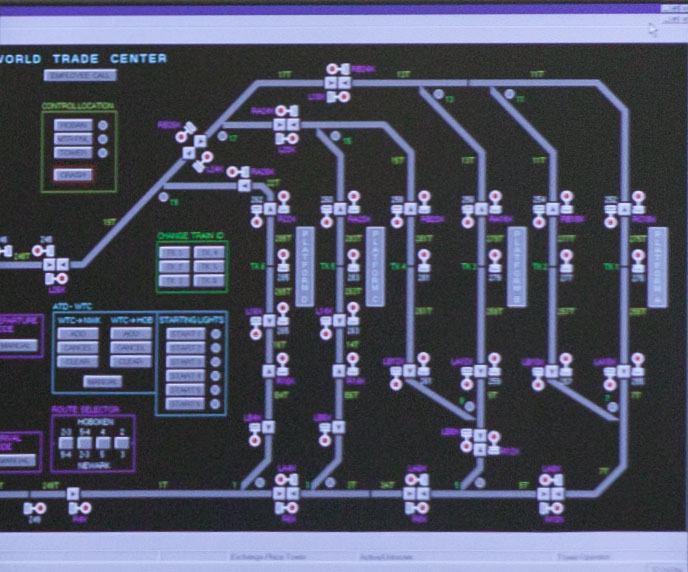 So I guess they finally built what they wanted - I haven't been to the new station except one time when I rode through on a train with an engineer who was retiring. And I was surprised to notice that there was a new station.

Unless they're going to have a third service (to where?) it doesn't make sense to me - using 3 tracks for a single service would seem to invite the kind of stampede that happens at Penn Station when a track number change is announced over the PA - "The next train for Newark will leave from Track X" while people are already on the platform that serves Tracks Y and Z.

by Backshophoss
Sun Jul 31, 2016 12:16 am
They could use the other tracks as staging/layup tracks,PATH use to keep a set at 33rd st on the weekends.
The Land of Enchantment is not Flyover country!


I invite my girls to the mall.

Four of us meet up on a bench outside the new Westfield World Trade Center and trade stories about mall awe, being ’90s kids hitting milestones in consumer culture. I don’t make a habit of asking “What mall did you go to growing up?” but the answers contain signifiers akin to “Where did you go to school?” (with more narrative sparkle). We go into this new mall, at the site of an old mall. It’s opening day.

The central promenade of the World Trade Center Transportation Hub is called the Oculus. Inside, columns extend skyward, linked by a thin spine of skylights. In Classical architecture, oculi were left open to the elements, and these skylights can open, too. It’s easy to compare the stunning, sun-blasted space to a cathedral. The high windows feel like clerestories; the vaulted ceiling clarifies what people mean when they say “heavenward.”

All four of us — Carrie, Juli, Lucia and I — are looking up. In front of us, the police stand on a marble perch, looking down. Carrie makes the surest architectural comparison for the space: the panopticon. The panopticon was an 18th-century design that called for open cells with a central tower, those observed never knowing exactly when they were seen. The plans inspired Foucault, who in “Discipline and Punish” probed the ways panopticism regulates behavior.

"Uh, not exactly" too much concern within this "Feature"article about the efficient handling of trains or movement of people. I'm sure this "rat pack's" Bennie, Caddy, or Lex was parked nearby @$60 a day.

In a way this Op-Ed, suggests that New York is ready to "move on"; lest we forget that 9/11 this year will be opening Sunday for the NFL as well as Finals for the US (tennis) Open.

I have to wonder if the cable news outlets will rebroadcast their "as it unfolded" TV coverage this year; so much "water under the bridge". Will there be the "Necrology" this year at the site?

A final thought; there are kids in college today that were toddlers then; no doubt their families were keeping them away from the TV during those days.

trainbrain wrote:So the new PATH station will have 6 tracks when fully complete, but only 3 are used now, and it appears that the system is running fine with those 3 tracks.

Sir, I respect your opinion, but as a daily commuter on HOB-WTC line, I would say the current set up is not sufficient. During the morning rush, on 9 out of ten rides, the PATH consist will spend 1-2 minutes idling outside of the WTC station waiting for a slot. HOWEVER, the good (with a catch) news is that the new platforms are now open BUTTTT, they shut down what was the Newark bound platform with what looks like some pretty heavy repairs which seem pretty extreme for a platform that's been in service for all of 12 months. Some pics:

Closed Newark Platform (that was open a week ago) from the Hoboken Platforms
http://i.imgur.com/EVvNzIc.jpg" onclick="window.open(this.href);return false;

Escalator being dismantled as seen from the Hoboken Platforms
http://i.imgur.com/7FuLCcS.jpg" onclick="window.open(this.href);return false;

by rr503
Tue Sep 13, 2016 4:54 pm
My aunt commutes through the station daily, and she says it is hell for commuters. For one, the stairways are poorly laid out and too narrow, but when it rains, the entire place becomes an ad hoc skating rink, as water + marble = ice-like floors.
My blog

"Ex Libris" is a book "Passenger Terminals and Trains" by John Droege (NY, 1916) which, while describing Hudson Terminal, notes that a South Tunnel was "to be built".

I don't think it ever was, but am I mistaken?

by Backshophoss
Tue Sep 13, 2016 7:53 pm
The original WTC station was never a problem to use,and fuctional.
Everything worked as intended,PATH had a habit of keeping a spare set of cars laid up at 1 of the platforms,
at WTC and at 33rd street.
The Land of Enchantment is not Flyover country!

by Hawaiitiki
Wed Sep 14, 2016 1:19 pm
The one bone that I will throw the Port Authority is that ridership might be double what it was then on the WTC - Newark Line
Double Track, Grade Separate, and Electrify America!

by ExCon90
Wed Sep 14, 2016 2:37 pm
I've read something that said there was a proposed future line to the CNJ Terminal in Jersey City which would probably have required an additional tunnel; maybe that could be it. Never built, as it happened, and probably just as well--traffic to Liberty State Park today wouldn't support it.

This book is in the public domain, on or about Page 158, there is reference to a second tunnel to be built.

Head-end View wrote:Did the original (1972) WTC Terminal have these kinds of problems when it was new? Anybody here old enough to remember?

Gilbert B Norman wrote:"Ex Libris" is a book "Passenger Trains and Terminals" by John Droege (NY, 1919) which, while describing Hudson Terminal, notes that a South Tunnel was "to be built".

I don't think it ever was, but am I mistaken?

Parts were. There is a postcard showing a dual portal at Hudson Terminal, despite the eastbound and westbound tubes coming in very far apart. The other half of the dual portal was for a link to connect Hudson Terminal direct to Erie (later Pavonia, now Newport). There are small sections of lined tunnel passing diagnonally underneath Tunnel E (WTC -> EXP). There is no access to them. There is (or was, haven't looked since the post-9/11 rebuild) a set of "barn doors" on the left side of Tunnel F (EXP -> WTC) which led into a short section of tunnel and muck-out, approximately under the old pier line.

You can see the Erie line as the white diagonal lines between the yellow (existing tunnels) lines in this picture: 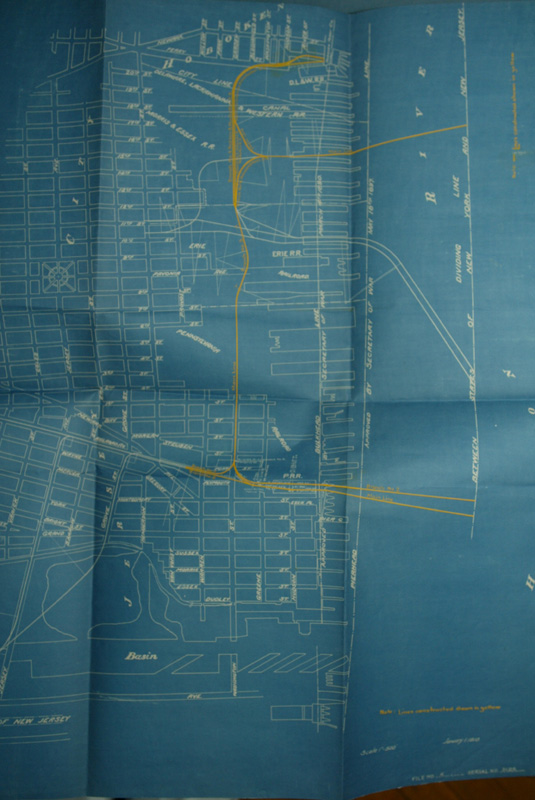 That also explains why the Scribner's drawing shows a full X crossover on 2 levels at the caisson instead of what you can see now (there's a signal shack in the unused Erie portal - that's where you see the Christmas tree / American flag lights): 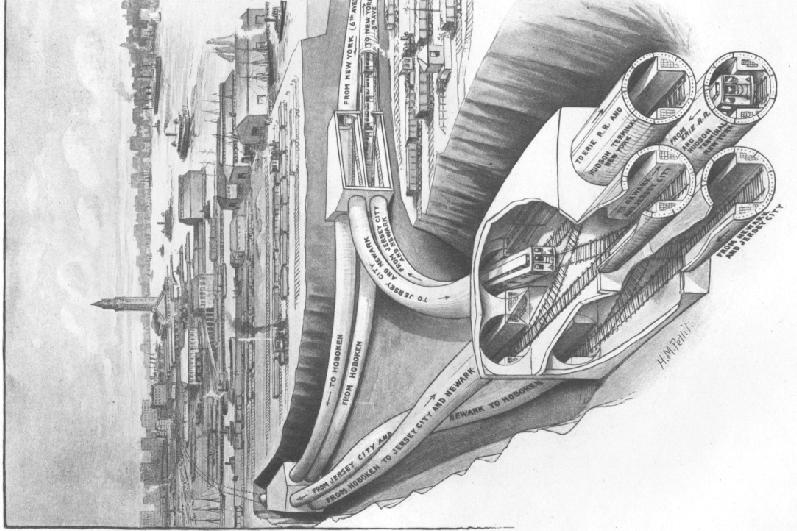 If this seems like a wasteful expense to simply duplicate existing service, you're looking at this with a modern mindset. Back then, the Pennsylvania Railroad (served by Exchange Place), the Erie (served by Newport), and the DL&W (served by Hoboken) were very independent. Talking Erie customers from Hudson Terminal to the Erie station via their competitor's basement (Exchange Place) was looked upon with disfavor by all parties. By the time anybody thought about building these (and other things, like extending to Grand Central, making the whole system 4-track instead of 2-track, etc.) all available capital was tied up in stock speculation (later leading to the crash and Great Depression) and the Hudson River Vehicular Tunnel (later named the Holland Tunnel after one of its deceased Chief Engineers) was well under construction.

Regarding building to the CRR terminal (now Liberty State Park), there were a number of options considered. The one you can still see today is at Grove Street - leaving Grove St. toward Journal Square, you can see a well-lit large set of electrical equipment to your right just after leaving the station. There's another one of those metal signal sheds in the portal that would have led to CRR. On the other side of the station, for many years there was a large dark opening, which they eventually covered up with plywood. Don't confuse either of these with the Y track lead at the east end of Grove St. westbound - that went up to a now-removed rail yard.

Another alternative, not shown on the above drawing, is conversion of the branch south of Newport, where trains go either to Exchange Place or to Journal Square, into a triple branch with a center route continuing south toward CRR. The only sign of this is a brief section of F track (GROVE -> EXP) which is in lined metal rings for strength - the rest of that part of F is cut-and-cover with concrete lining. Something similar was done where the NJ-bound tracks from 33rd Street split to Hoboken or Newport - a central branch was planned there to continue west toward Newark after joining the tracks from Erie - you can see that on the drawing.

At Liberty State Park, out in the (when I was there last many years ago) tick-infested fields of long un-cut grass and weeds, are some ring segments lying on the ground. I don't know if these were put there by the H&M, dumped there later, or how else they could have gotten there.