Pertaining to all railroading subjects, past and present, in Canada. For specific railroad questions, see Fallen Flags and Active Railroads categories.

Here are some videos I've taken at, or near, the Vendôme train station:

For the second video, I was waiting at Via Rail's station for an AMT test train on the Mascouche line to appear, but it didn't... However, I had the chance to capture a CN freight train.
Top

Some exclusivity ahead of the AMT's new Mascouche commuter train line's opening on December 1st. I had the chance to catch this test consist of Bombardier multi-level passenger cars, pulled by an ALP-45DP locomotive in electric mode, emerging from the Mount-Royal tunnel at Canora train station. Quick video, so check it out!

Yesterday I had the chance to ride aboard one of the trains on the new Mascouche line from Downtown Montreal to Mascouche. It has been a very nice trip, especially aboard the Multi-level cars.

A ride aboard a train on the AMT Mascouche line - December 2014 : http://youtu.be/OW2M27SqgZI" onclick="window.open(this.href);return false;

There are some other videos available from some riders:

This a video taken when the train passes across the bridge on Rivière-des-Prairies: https://www.youtube.com/watch?v=BTRBbHgpL8A" onclick="window.open(this.href);return false;

This is a view on the protective wall near the explosives factory in Repentigny: https://www.youtube.com/watch?v=0lWEOkzqo-I" onclick="window.open(this.href);return false;

When the train arrives in the middle of highway 640: https://www.youtube.com/watch?v=ui9SNGvLRUI" onclick="window.open(this.href);return false;

A ride in the middle of the highway. There are some drivers who are trying to exceed the train on the highway: https://www.youtube.com/watch?v=OKH0UjSPSqE" onclick="window.open(this.href);return false;

In this video, who can hear a man saying that the train runs at 122 km/h (76 mph) when it's in the middle of the highway: https://www.youtube.com/watch?v=HDpjRLyaau4" onclick="window.open(this.href);return false;
Top

Here are the longer versions of my videos showing my trip aboard an AMT train on the new Mascouche line. It took me some time in order to edit it but here there are:

At the same time, here's a beautiful picture taken by Nicolas Houde of an AMT train heading towards Mascouche circulating on the Deux-Montagnes subdivision between Canora and Mount-Royal stations:

Here's a picture of a freshly repainted AMT F59PHI by Canadian Allied Diesel and with an AMT logo on the long hood for the first time. Picture taken by Michael Berry: 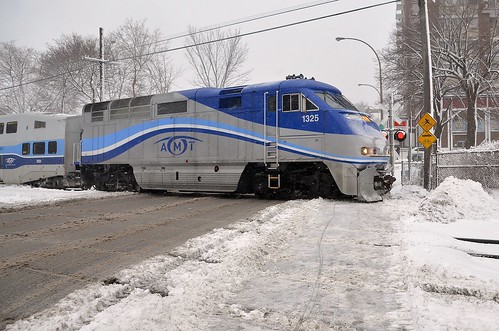 Freshly repainted - with an AMT logo on the long hood by Michael Berry Railfan, on Flickr
Top

Here are some other videos I've taken between the Mount-Royal and Canora stations of the AMT trains operated on the Mascouche and Deux-Montagnes lines. We can also see, in these videos, when the ALP-45DP locomotive is switching modes (from diesel to electric and vice-versa) at Mount-Royal stations before entering, after exiting, the Mount-Royal tunnel:

AMTFan1 wrote:Here are some other videos I've taken between the Mount-Royal and Canora stations of the AMT trains operated on the Mascouche and Deux-Montagnes lines.

Thanks for sharing. Any idea why the MR90 train exiting the tunnel at the end of part 1 was using the west track rather than the normal east track?
Top

There are only two stations where the change of mode can take place, Canora and Mount Royal. The convention seems to be Mount Royal which makes sense since that makes the most use of electric power versus diesel.
Top

Thanks! Does AMT still use F40s?
Top

Thanks! Does AMT still use F40s?

I don't think there are many left, if any. MBTA is in process of leasing several F40s which were once in AMT service.
Top

Ken V wrote:Thanks for sharing. Any idea why the MR90 train exiting the tunnel at the end of part 1 was using the west track rather than the normal east track?

Thanks! The Mascouche trains should be changing modes at the Ahuntsic train station rather than Mount-Royal or Canora station. They have also electrified part of the CN subdivision until Ahuntsic. But they have been experiencing some problems with the catenary when the Mascouche line opened last December. Plus, there's still some construction work around the Ahunstic station. So they have to switch modes at Mount-Royal for the time being. But this can cause some problems on the schedule of the trains since the mode switching can take around 3-4 minutes and another train heading toward Deux-Montagnes arrives like 6-7 minutes after the Mascouche train during the rush hour and has to wait behind until this train finishes switching modes at Mount-Royal.

The entire AMT Deux-Montagnes subdivision is a quiet zone. In fact most of the AMT lines are all quiet zones. There might be some places like between Hudson ans Vaudreuil on the Vaudreuil/Hudson line, or between Saint-Jérôme and Blainville, on the Saint-Jérôme line, where the trains are allowed to sound the horn.

Here's my latest video. I filmed it yesterday afternoon on the Deux-Montagnes sudivision between Canora and Mount-Royal station: https://www.youtube.com/watch?v=-ZY9Z2G5rrs" onclick="window.open(this.href);return false;
Top

The AMT no longer use any F40. They were all replaced by the ALP-45DP on the Mont-Saint-Hilaire line although they are being used in 100% pure diesel mode. The only electrified or partially electrified train lines in Montreal are the Mascouche and Deux-Montagnes line. But most of the fleet of the 20 ALP-45DP locomotives are being used on pure diesel mode. Many people are now criticizing the AMT and the government for having bought those very expensive locomotives.
Top

As many of you may already know, the Two-Mountains train line (Deux-Montagnes train line) is the busiest commuter train line in Montreal and serves many of the West Island and north boroughs of Montreal.

Many problems have been affecting this train line for almost 10 years and the AMT and the Quebec Government have refused to realize many projects on this line, as the deployment of double decker train cars, in order to improve service despite the fact that more than 40% of the train network's users come from this line.

A group of citizens and train users have launched a petition on the Quebec's National Assembly website in order to put pressure on the AMT and the government to improve the service ( http://www.journaldemontreal.com/2015/0 ... e-pression" onclick="window.open(this.href);return false; )

The link to their facebook page is available here: https://www.facebook.com/groups/AMTDeux ... allygroup/" onclick="window.open(this.href);return false;

The link to the petition is available here until July 24th 2015: https://www.assnat.qc.ca/fr/exprimez-vo ... index.html" onclick="window.open(this.href);return false;

Yesterday afternoon I made a trip aboard one of the AMT commuter trains on the Mont-St-Hilaire line.

On the first video, we can have a cab view from the back when the train is leaving Central Station and when it is crossing the Victoria Bridge until Saint-Lambert station.