On the same topic has there been any talk about some sort of train travelling once again between Halifax and Sydney? Seems like there still is rail traffic up to Port Hawkesbury and then the once a week or so train to Sydney (???). I keep hearing mixed reports on the continuation of trains on this line up to Cape Breton.

Before the Canso Causway linking Nova Scotia to Cape Breton opened in 1955, all schedules included an extra hour for the trains to be ferried between Mulgrave and Point Tupper (Port Hawkesbury)

Here’s the Cabot with through cars from Montreal to Sydney crossing the Canso Causeway. 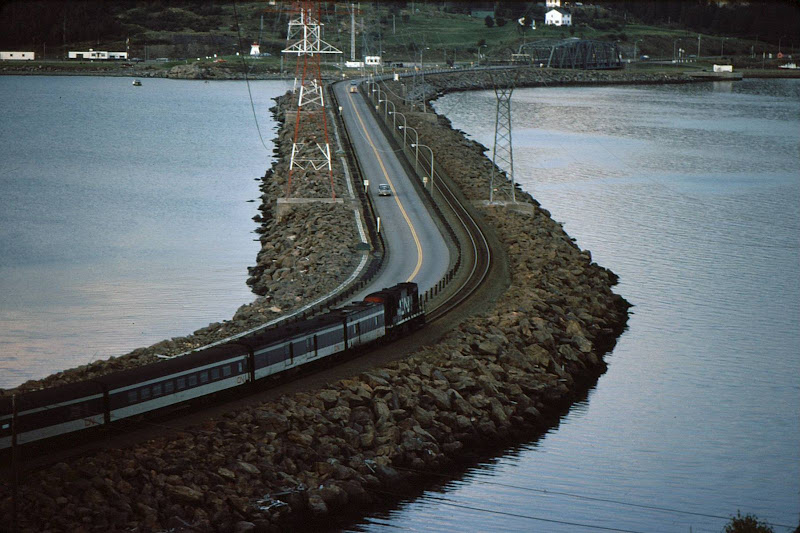 I'd love to see a VIA train back in service - perhaps just seasonally between Halifax and Port Hawkesbury - although Sydney as a terminus would be more ideal. I know they are upgrading the highway from Truro to Port Hawkesbury, but it was a painful drive to say the least. I kept saying - I'd rather be on a train than driving this car right now. I do recall seeing the tracks in Cape Breton a few years ago and they certainly looked like thy could use an upgrade if passenger rail was to operate over the line. The line south of Port Hawkesbury, from what I could see from the highway, looked in descent shape. Wishful thinking on all, as I don't think we will ever see an expansion of VIA Rail service from Truro up to Cape Breton again. Before the Bras'd'Or came off, VIA was planning to operate it twice a week on a more friendlier departure schedule from Syndey and Halifax, that is leaving Halifax on a Friday or Saturday at least and then another weekday departure likely when the Ocean didn't operate out of Halifax. But it would have had to have been operated with stainless steel equipment - as opposed to Renaissance equipment that was making its debut on the Ocean. VIA said they pulled out of the Bras'd'Or service due to the uncertainty of the train line up to Cape Breton as abandonment of portions of the line north of Port Hawkesbury were likely. It seemed they were afraid to announce "next year service" due to the travel agency bookings this train often got.

But now the future of the train line appears to have changed a bit.....

by timberley
Sat Dec 11, 2010 1:07 pm
I too would love to see some sort of rail service restored to this line. I know I've talked to many people here in Antigonish who fondly remember when you could hop on an RDC en route to Sydney or Halifax every day, even as late as 1992?93? I know though that it would probably be difficult to justify the service, but I do feel like a lot of people would use it. It would probably require substantial upgrades to the line though. Perhaps if any of the container terminal proposals eventually get the go ahead, and perhaps CN buys back the line or RailAmerica makes some major upgrades to handle container traffic, then the line might be in good enough shape and regular use to allow passenger trains. Although at the same time, increased freight traffic might make scheduling difficult. Who knows. It's all pretty much speculation anyways.

by kmillard
Mon Dec 20, 2010 12:09 pm
I thought the line between Sydney and Halifax was torn up years ago and all that's left of the right of way are bike and hiking trails along with some old bridges.
"Government isn't the solution to our problems, government IS the problem."

kmillard wrote:I thought the line between Sydney and Halifax was torn up years ago and all that's left of the right of way are bike and hiking trails along with some old bridges.

Perhaps you are thinking of the Dominion Atlantic Railway line between Yarmouth and Halifax......it had VIA service until Jan 1990 then abandoned but a portion of that line still exists today as the Windsor & Hansport Railway.

The line between Sydney and Truro is now the Cape Breton and Central Nova Railway. There's a couple of freight a week from Sydney to Port Hawesbury then daily xSat from there to Truro. Truro to Halifax is part of CN's transcontinental mainline and still has service with VIA's Ocean.