by R&DB
Fri Nov 12, 2021 3:09 pm
Monmouth and Ocean Counties once had a thriving military pressence. Fort Monmouth Earle NWS and Lakehurst NAS were all served by what is now known as the Southern Secondary. Fort Dix/Mguire AFB served by Union Transortation. Additionally there were Camp Evans, Camp Coles and Sea Girt. Fort Monmouth and Sea Girt were also served by the NJ&LB (NJTCL). All of the above also had much truck traffic.
Harry

Bracdude181 wrote: ↑Fri Nov 12, 2021 12:37 pm @GSC Military loads? Like the ones I occasionally see now? Flatbed trailer with a whole bunch of large green crates on them.

We handled flatbed and lowboy loads mostly. Wheeled and tracked vehicles, machinery, construction equipment, fold-up pontoon bridges, radar dishes, large crates like those containing anchor chain links, milvan containers, a lot of oversized permit loads. We had one driver who had a magnetic sign made that he stuck to the rear of army tanks like big M88s and M578s that read, "Warning. Tailgaters will be destroyed". Someone stole the sign at a truck stop.

The bridge beams I picked up from the TRIT weren't military. We were hired to move them as we specialized in oversized loads.
They tell me to act my age. I don't know how to do that. I've never been this old before.

by Tanker1497
Mon Nov 29, 2021 11:25 am
Saw this new shinny signage at Southampton and the Barnegat Branch. This where I would park and fish the Wrangle Brook. Its 6000 ft south of the Ciba turn. Might be do to dumpling of leaves as both sides looked like several trucks dumped! 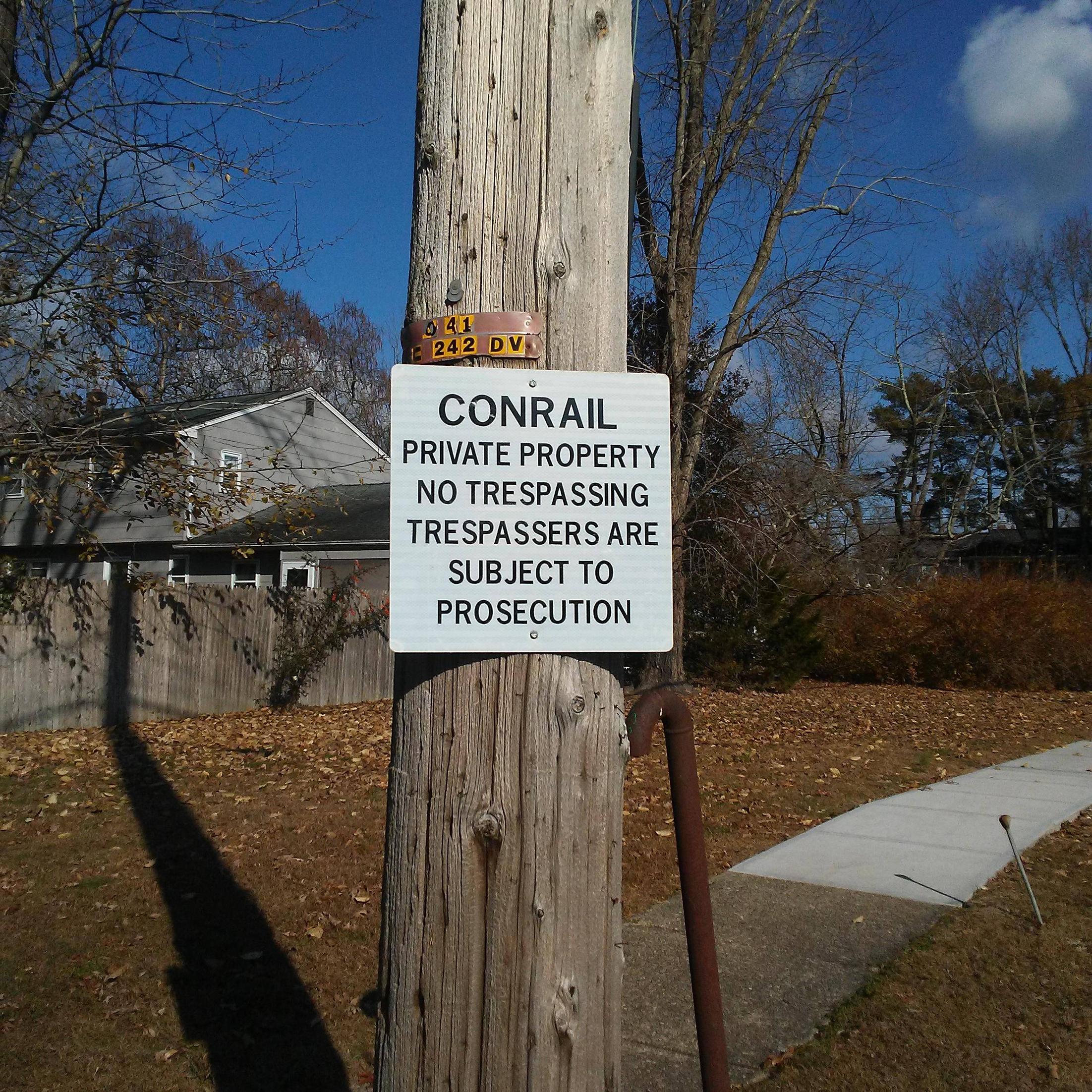 by Bracdude181
Mon Nov 29, 2021 1:13 pm
That and I think they don’t want any vehicles on the dirt road anymore. I assume they probably don’t want anyone to crash into the power poles along the former ROW?

by JohnFromJersey
Mon Nov 29, 2021 5:47 pm
Wonder if they are trying to set the stage for future rail restoration in the future. Trains haven't run there in almost, if not more than, 20 years. The area has gotten pretty densely populated since then, so I'd imagine if anything is in the works, they'd want the locals of that area to acknowledge that the rails/ROW exist there first before they start running trains there; that would surely lead to some nasty surprises for some people

by Bracdude181
Tue Nov 30, 2021 4:28 pm
@JohnFromJersey Conrail isn’t gonna expand a line that they want nothing to do with. The signs are more than likely being placed to try and tell people to not dump on the old ROW or not bring vehicles down it and risk them crashing into the telephone poles.

by CharlieL
Tue Nov 30, 2021 8:14 pm
I suspect, knowing the neighborhood that's in there may have been more than a few complaints about dirt bikes and quads referred to the town, in turn referred to the owner (whose proxy is conrail).

by JohnFromJersey
Tue Nov 30, 2021 8:33 pm
Speaking of Conrail, who would own/be in charge of the TRIT if/when C&D takes over? I know 'technically' they are separate lines, but you cannot get onto the TRIT without accessing the Southern.

To my knowledge it seems that NJDOT is the owner of the FIT, SOUS, and TRIT, and Conrail is just the operator(?), but C&D would be subcontracting under Conrail.

Surprised there hasn't been any motion to try and convert the TRIT into some sort of railtrail, like the rest of the Barnegat Branch has become. Guess long-term, they are still considering this for something,

by Bracdude181
Tue Nov 30, 2021 9:59 pm
Don’t jinx it. Ocean County has been wanting to extend the Barnegat Branch Rail Trail to Lakehurst but so far they have done nothing. The TRIT right now has F A R more potential to be a profitable rail line than the Southern and Freehold. Possibly combined.

by JohnFromJersey
Tue Nov 30, 2021 11:37 pm
How? If you're talking about converting the Ciba Geigy place into some sort of rail trans-loading facility, I'd agree, but that kind of investment for the line isn't going to happen any time soon. I don't think people realize the potential for it.