Discussion relating to the pre-1983 B&M and MEC railroads. For current operations, please see the Pan Am Railways Forum.

The law that stipulates that all of Massachusetts's waste gets sent out of state is far newer, and is the reason why so much trash is heading out via rail now. The economics weren't there in the past, but might be now, or not, who knows.

FWIW, Dalton voted to extend their temporary zoning by five votes yesterday; Casella is going to have to strong-arm their way, if they want to get that landfill in. I just don't see this idea going anywhere. The rails in that stretch turn 100 next year as well.
Avatar: NHV 669 at the south end of the "Pompy" in White River Jct., VT on 4/29/1993. Photo by Richard Roberg.

by S1f3432
Sat Dec 25, 2021 2:39 pm
Bumping the thread with a season appropriate meet between YR1 and RY2 at Fryeburg, ME in December in 1980.
RY2 apparently left Rigby early this day, perhaps in advance of a holiday shutdown, and has pulled into the siding
which isn't long enough so has nosed into a stub track at the west end. The consist this day is 400-409-406-407
and an unrecorded U18B- half the U18 fleet! In a few minutes along comes YR1 with 565, MK5001 and 255. MK5001
was one of Morrison-Knudsen's Sulzer engine demonstrators which toured the MEC for a while.
Happy holidays everyone!
You do not have the required permissions to view the files attached to this post.
Greg S

by Cowford
Thu Dec 30, 2021 10:36 am
Thanks for sharing, Greg. Based on the light, it looks like RY-2 could have made it to the Notch before nightfall. Brings back good memories of the Mountain. Happy New Year!

by S1f3432
Sun Dec 25, 2022 1:19 pm
Bumping the thread after almost a year with no posts, here are a couple of shots of
YR2 at Notchland during the reconstruction of Route 302 with the new overpass. The
engine consist includes 262-263-801-802-403 and separated by one boxcar are ex L&N
393 and 439 on their way to Waterville for rebuilding. Happy holidays everyone.
You do not have the required permissions to view the files attached to this post.
Greg S

by bostontrainguy
Mon Dec 26, 2022 9:26 am
There is a good article in the recent Trains magazine that talks about Mellon's Guilford Transportation's purchase of the Maine Central and Boston and Maine 40 years ago. There is one photo of two beautifully clean Guilford GP7s (470 and 573) leading a press special about to head up through the notch with the caption, " . . . heading up the scenic Mountain Division, soon to be abandoned in favor of a longer Maine Central/Boston & Maine/Delaware and Hudson routing". Just have to wonder how things might have ended up if the chips had fallen a little bit differently.

by S1f3432
Mon Dec 26, 2022 6:00 pm
The story we were given back in 1980 was U.S.Filter owned a lot of coal in southwest Pennsylvania and planned to ship it by rail to Portland to be loaded on ships for export. That didn't make a lot of sense back then and still doesn't today. It is more expensive to ship by rail than by water so the transfer to water is usually at the nearest port possible. Baltimore was already in that business, having the equipment and facilities as well as being a lot closer. Then add in the cost to upgrade the railroad to handle that traffic and build new facilities in Portland. The purchase of Maine Central and then quickly flipping it to GTI six months later always seemed a little too contrived to me-

these deals just don't happen that fast. U.S.Filter was itself sold to Ashland Oil shortly after purchasing MEC and stated the sale to GTI was because Ashland was going to take the company in a different direction and didn't need or want MEC. How convenient Timothy Mellon just happened to be sitting there with an empty lap for this to fall into. E. Spencer Miller had long resisted overtures from F.C.Dumaine and his Amoskeag Corp. and probably felt selling to U.S.Filter was a way to keep it out of Dumaine's hands and was later said to regret the sale. The Mellon family banking interests quite possibly could have bee involved in the financial transactions between the three companies so who knows what kind of wheeling and dealing went on behind closed doors. Now it's just moot conjecture 40+ years later.
Greg S

by S1f3432
Mon Dec 26, 2022 6:11 pm
It should also be noted that Norfork Southern was trying to buy Conrail and after GTI purchased
MEC, B&M and D&H, NS came up with a plan to spin off lines of the former EL and NKP to GTI
to provide some semblance of competition in the northeast. This plan fell apart when CSX
contested the purchase resulting in NS and CSX agreeing to split Conrail between them. With
this, GTI's grand expansion plans to Chicago and St. Louis evaporated.
Greg S

by Who
Wed Dec 28, 2022 4:20 pm
When GTI moved the CP interchange point, did they just dust off the cobwebs to the original MEC plans? IIRC, the MEC tried to eliminate the Mountain Division as far back as the 1920's. At the time the MEC was still leasing the line from the P&O, is it possible P&O shareholders blocked the move or was it other factors?
Who's on first?

S1f3432 wrote: ↑Mon Dec 26, 2022 6:11 pm It should also be noted that Norfork Southern was trying to buy Conrail and after GTI purchased
MEC, B&M and D&H, NS came up with a plan to spin off lines of the former EL and NKP to GTI
to provide some semblance of competition in the northeast. This plan fell apart when CSX
contested the purchase resulting in NS and CSX agreeing to split Conrail between them. With
this, GTI's grand expansion plans to Chicago and St. Louis evaporated.

I still have a copy of the original plan, "Acquisition of Rail Properties in Connection with Purchase by Norfolk Southern Corporation of Common Stock of Consolidated Rail Corporation" dated June 30, 1985. 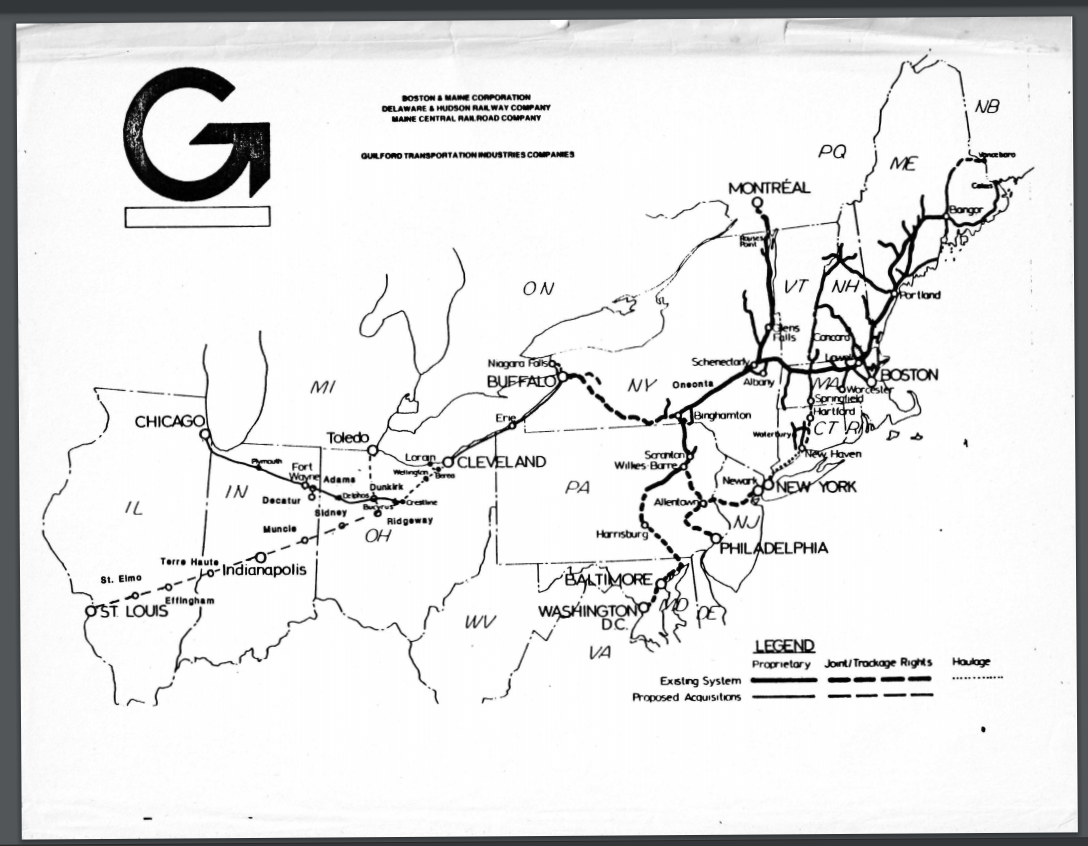 by S1f3432
Wed Dec 28, 2022 7:15 pm
Responding to the post by "Who", I remember reading an article ( I think it was in "CN Lines", the publication of the CN SIG ) that as far back as the 1930's MEC and CN had discussions about MEC detouring over GT between Danville or Yarmouth Jct. and Groveton and GT going into Portland over MEC but they could never come to terms. I suspect money was only part of the issue; the other being neither railroad wanting to be dependent on the other. There was precedent for this as trains of one railroad had detoured over the other occasionally on account of derailments and CN's Maine Coast Special in the 1930's ran to Portland Union Station and then to Old Orchard Beach over MEC/B&M from Yarmouth Jct.
Greg S