The King (Prince Andrew) is Dead; what will become of NY area projects?

This forum will be for issues that don't belong specifically to one NYC area transit agency, but several. For instance, intra-MTA proposals or MTA-wide issues, which may involve both Metro-North Railroad (MNRR) and the Long Island Railroad (LIRR). Other intra-agency examples: through running such as the now discontinued MNRR-NJT Meadowlands special. Topics which only concern one operating agency should remain in their respective forums.

by photobug56
Fri Aug 13, 2021 4:01 pm
As I understand it, Cuomo chose to carefully eliminate any ability to include or later on add tracks for commuter rail. It wasn't clear to me why he was so adamant about it.

by njtmnrrbuff
Sat Aug 14, 2021 7:28 am
I would love to see the third track on the Harlem Line extended to at least White Plains but with Cuomo out of office, we should see about the future of that.

I hope that the MTA MNR East Bronx Project happens. I think Cuomo really was onboard with that project.

photobug56 wrote: ↑Fri Aug 13, 2021 4:01 pm As I understand it, Cuomo chose to carefully eliminate any ability to include or later on add tracks for commuter rail. It wasn't clear to me why he was so adamant about it.

What about the LIRR's Third Track on the Main Line and Second Track on the Ronkonkoma Branch?
"Look down, step over, and watch the gap!" - Dr. John Clarke, The Gap Rap (2010)

by photobug56
Sat Aug 14, 2021 6:09 pm
Does she know anything of NYS government or the MTA? My guess is that she'll only nominate someone who political hacks tell her to for running MTA. I'm not optimistic about what she'll do. ESA has long scared me in terms of lack of management, hopefully the 2nd track project is far enough along to finish OK. But MTA arrogance is also an issue - SOME of what they've done on the 2nd track project is not so good (super high poles rather than power lines buried, for instance). I have also noticed that if you email the project management on the public email address, they NEVER respond.

photobug56 wrote: ↑Fri Aug 13, 2021 4:01 pm As I understand it, Cuomo chose to carefully eliminate any ability to include or later on add tracks for commuter rail. It wasn't clear to me why he was so adamant about it.

He supported the latter, and after years of sitting on it he revived the 3rd track project. Why he opposed putting tracks on the Tizzie I can't figure out. He went out of his way to make sure it didn't happen.

Pensyfan19 wrote: ↑Tue Aug 10, 2021 4:05 pm How do you think the NYC Subway System, MTA and other NY rail agencies will be operated under newly-appointed Governor Hochul? Will we see service and project improvements or delays? The floor is open for discussion.

Mr. Pennsy, first let me note I was in Salzburg when Andy announced "I'm done"; I was watching in my hotel room, the English language version of the German news channel Deutsche Welle; they "cut away" for a feed from CNN.

Now allow me to clarify one point that duly elected Lt. Gov Hochul was not appointed to anything; the NYS Constitution calls for the Lt. Gov to fill the seat of the Gov for whatever reason such is vacated. That Constitution now calls for a Lt. Governor to be appointed from sitting legislators (source: New York Times).

Now back on the rails; I think that passenger rail interests, which means the South Eastern quadrant of the State - and not too much elsewhere - had best accept that "Lady Guv" got on the ticket to shore up Andy's support in Western NY. While who's to say she can't learn - especially since she already "talks of running" in '22 - I think that rail passenger interests must accept there will be a "time out" for the various projects noted in this topic and elsewhere at the Forum.

by eolesen
Sun Aug 15, 2021 9:44 am
As upset that people are with AirTrain going the wrong direction, especially high level PANYNJ staff, I suspect there will be a few shifts. Not many, but some meaningful ones that will overcome decisions Gov Gropy bullied past the Agency heads.


Sent from my SM-G981U using Tapatalk


Ms. Hochul will assume control of the Metropolitan Transportation Authority, which operates a network of subways, buses and two commuter trains, as it is facing a severe crisis.

The M.T.A. has lost about half of its riders since the pandemic started. The subways are carrying about 2.5 million riders each weekday, down from more than 5.5 million in 2019. On the commuter railroads — the Long Island Rail Road and Metro-North — ridership is down about 60 percent. A fare increase scheduled for this fall was postponed in hopes of luring back more riders.

Be sure to glance at the other non-rail issues Ms. Hochul need address; then first prioritize that the people use the NYMTA to a far greater extent than they use the Empire Services.

by GirlOnTheTrain
Thu Aug 19, 2021 12:59 pm
Time to get rid of his cronies on the MTA board like Larry Schwartz. There is a potential for real change if Hochul thinks for herself and doesn't just continue cosigning and continuing Cuomo's BS.
"I am no longer just a girl on the train, going back and forth without point or purpose."

Technically she can replace all the governor appointed MTA board members, I believe. But some current ones could be good, like the person representing PCAC at the board (non-voting).

Super political. I'd wanted to be on one of the councils under PCAC, appointed by the governor after nomination from the county executive. But our county exec only appoints friends or friends of friends.

by Defiant
Sun Aug 22, 2021 11:16 pm
I guess I don't share this board's dislike of Cuomo. He might've been an ambitious politician with limited interest in public transportation. But he got a lot of projects started and built. Which is a great accomplishment in the NYC metro area and in America as well, with the declining federal investment in the infrastructure. At least before Biden...

The new Governor comes from the less urban part of NYS. She is probably used to driving everywhere and might've never taken public transportation anywhere. I am afraid that she will have limited interest in mass transit projects. That might even endanger Gateway as she will have to come up with the NYS share of the project if federal contribution ever arrives...

I would be very happy to be proven wrong...

by photobug56
Mon Aug 23, 2021 12:11 am
Cuomo did move transportation projects forward. The 3rd track project might never have gotten underway otherwise. Having said that, his LGA train loop to the plane is bloody awful and hopefully never happens. Subway extension makes far more sense. In the meantime, he claims to have gotten ESA back on track, but I have huge doubts as to what year that will finally open (reliably). The 2nd Ave Stubway helps, but has been horribly expensive.

As to Hocuhil, my expectations are super low. She has no actual experience in state government that I'm aware of, likely (as noted) knows nothing about mass transit or commuter rail, and has nothing in her background that I've heard of that suggests she's even remotely prepared to be governor. And yes, I hope I'm wrong.

by bostontrainguy
Mon Aug 23, 2021 9:08 am
I thought he was kind of brilliant when he proposed the new "Empire Station Complex". I thought it was going to be a separate station for the Empire route located at the end of the West Side Line near the Javits Center but connected to Moynihan/Penn Station by pedestrian tunnels and the West Side Connection. It would remove Empire Service trains from the NYP tracks opening them up for additional slots and speeding up trains to and from the north. It possibly might have even allowed the LSL to be converted to Superliners if a servicing center was included in the plan.

I guess I gave him too much credit or I was expected too much from the "Empire Station Complex" nomenclature. 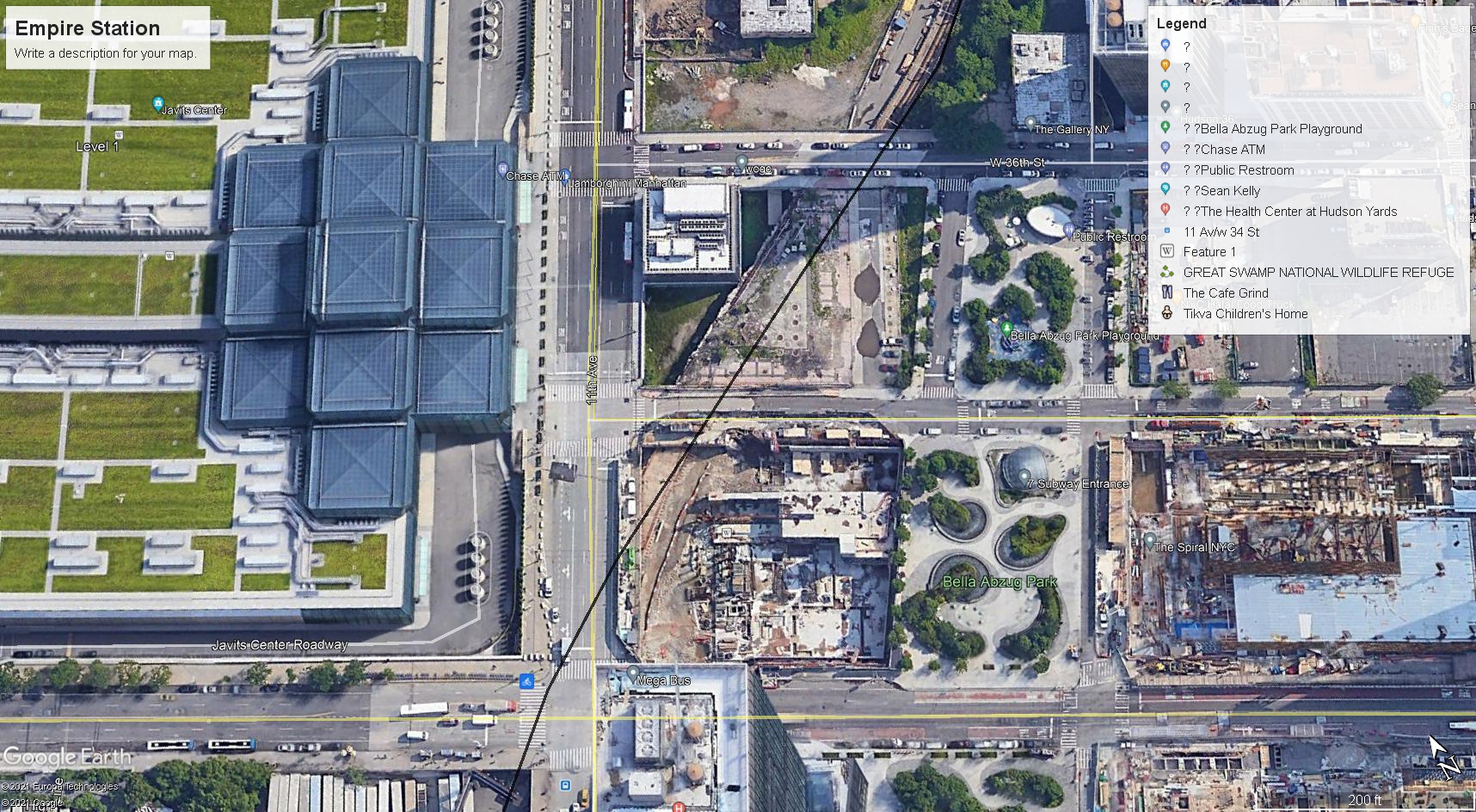 by photobug56
Mon Aug 23, 2021 3:18 pm
His Penn expansion was more a real estate deal than anything else. Rip down the Hotel PA, a couple churches (at least 1 servicing homeless, which would make the Penn Station homeless problem far worse), build a bunch of new office buildings that there won't be any tenants for any time soon, remove any remaining low cost retail or food places in the area, oh, and add a few tracks to the south of Penn. He had to have seen big bucks coming his way eventually to have gone that crazy with it. Might have helped Penn a bit, but would have done huge harm along the way.

In the meantime, he was doing nothing to restore and improve underground connections to PATH and the 6th Ave Subway, something badly needed, a good separation of traffic and pedestrians (plus making a weather protected connection).