by Benjamin Maggi
Tue Jun 23, 2020 10:58 am
I occasionally search EBay for train slides related to the C&CV railroad in Cooperstown, NY. In the process, I usually run across postcards for sale showing the "Leatherstocking Line" steam train which ran in the 1960s-1970s at the Woodland Museum. The steam engine is a small Porter (0-4-0) and the coaches are green with white bands along the windows and a red roof.

This link has a brochure of the place: https://www.flickr.com/photos/[email protected]/6785392257
The brochure reads in part:

The Busch Family (lead by Louis Busch Hagar Sr) gamely tried to make a good of a museum in Cooperstown near Three Mile Point and on the wooded and elevated grounds of their estate - Farmlands & Uncas Farm. On lake road announcing the museum were wooden life-size Clydesdale horses

"Home of the Clydesdales"

The Woodland Museum, part of Cooperstown's Village of Museums, was opened as an "adventure in nature and history" in 1962. This museum evolved from an educational institution focused on Cooperstown and New York State through a branding change that strengthened the museum's connections to the Busch family and the Anheuser-Busch Company, primarily through the use of Clydesdale imagery.

The NJ Museum of Transportation's website says the railroad closed in 1974 and the train was sold to a place in Lake George.
http://www.njmt.org/number_3.htm

I am not from that area of NY but would like to learn more of this railroad and what happened to it. Having visited Cooperstown, I can't picture where the ROW for a circular train ride would have been. Can anyone tell me more about the operation when it was in Cooperstown? Thanks.
Benjamin L. Maggi
A&A Railroad Forum Moderator

by Marty Feldner
Wed Jun 24, 2020 4:22 am
Found this online (no, I don' remember where). Not sure if this is the same operation or a different incarnation; labelled DO May 1966. This is at the former Ulster & Delaware Oneonta station, now a decent restaurant.


DO May 1966.jpg
You do not have the required permissions to view the files attached to this post.

According to the info above, the museum was near Three Mile Point. That still comes up on Google Maps, so I suggest that's where to start the search.

I listed a slide from that operation a while back and it had virtually zero interest, even though it should have been a high dollar piece with lots of bids.

by traingeek8223
Wed Jul 08, 2020 12:08 pm
The Busch Family train was built upon the unfinished ROW that was graded north of the original D&H Cooperstown station behind what is now the Farmer's Museum. I have not been there in person to see if anything is visible today but I would assume not. Pictures of this operation are pretty scarce. I've only seen a few. Some can be found here:

I believe it was a push pull, out and back type of operation.
Matt Giardino
ALCO Historical & Technical Society

by Benjamin Maggi
Wed Jul 08, 2020 12:35 pm
Thanks. Unless I am looking in the wrong place, I do believe the ROW is gone.
Benjamin L. Maggi
A&A Railroad Forum Moderator

by CPSmith
Thu Jul 09, 2020 9:30 am
Thank you, traingeek! It's starting to make a little more sense now. Our family trip to Cooperstown included a visit to the Baseball Hall of Fame (the only thing I remember was a phone on the wall - if you picked it up, you could listen to a recording of Babe Ruth talking about his career stats - aah, modern technology!) and a visit to the Farmer's Museum later that day, and that's where I saw the train. I didn't recall visiting any Busch property, so I was a little confused as to the originally stated location. And, with the additional information it was built on a former D&H alignment (graded but not laid, apparently), it's easy to follow the that route north out of Cooperstown on Google Maps (hey! even better modern technology!) … and … it runs right along the rear of the Farmer's Museum property.

by KevinM
Thu Aug 06, 2020 2:48 pm
I visited Woodland Museum with my parents as a kid. Tough to fix the actual date, but I think 1967 would be close. I recall visiting Rail City in Sandy Pond, NY that same year. And yes, I do remember riding the "Leatherstocking Line." It was a narrow gauge (36") operation and as I recall the track wasn't all that long. It was definitely an "out and back" operation, in which the train ran outbound with the loco in front, and then shoved backward to the loading area. There were no structures such as a station or water tank, or at least none that I recall. The place just had a loading platform in the woods. The line was "L-shaped". Two straight legs, with a right-angle bend in the middle. It was almost entirely in the woods, with the only open stretch right near the end of the line, just above the parking lot. I remember that my dad shot a short clip of 8mm film of the train as it passed the parking lot when we were leaving.

With regard to the equipment, I later learned that the locomotive was Raritan River Sand Co. #2, originally an 0-4-0T, but with a small tender added at some point, which was for fuel (coal) only. If I recall correctly, when I saw it, it retained the saddle tank. It also sported a sunflower-style stack. It was painted black with red and white trim, and was relatively tasteful. The locomotive was operated by one individual, and pulled two enclosed coaches, which were green in color....again, relatively tasteful. I have a post card picture of it someplace. The rrpicturearchives photos that someone linked appear to have been taken after my visit, and other than the cab and running gear, I almost don't recognize it. Ugh....they really clowned her up.

After that one visit, I never saw the place again and never heard about it. I later read that the museum went under in the 70s, which didn't surprise me. As I recall, the place was not an attention-grabber, and even as a kid, I liked museums.

I believe that the locomotive survives at the Georgia Museum of Agriculture in Tifton, GA, which is an agriculture-themed museum/park, that does feature a steam train ride behind a Vulcan saddle-tanker. I believe that Raritan River Sand Co. #2 is stored inoperable at this facility. In between its tenure at Woodland Museum and its current location, it may have been through several owners, but documentation is poor. I have read that it may have run at Pine Creek Railroad in NJ and at some sort of Toy Train Museum.

Hope that helps a bit!

by jcpatten
Thu Nov 12, 2020 8:52 pm
Sorry to resurrect this thread. I've been scanning old family slides and found this one in the collection, and ran across this thread when I searched Woodland Museum.

My parents were married July 1968, and honeymooned in Niagara Falls. My father was big into railroads, so I think they must have hit every railroad attraction between Niagara and Maine on their way back home. They stopped in Cooperstown. This picture is my mother in front of the steam engine. There's also a slide of a horse-drawn car. 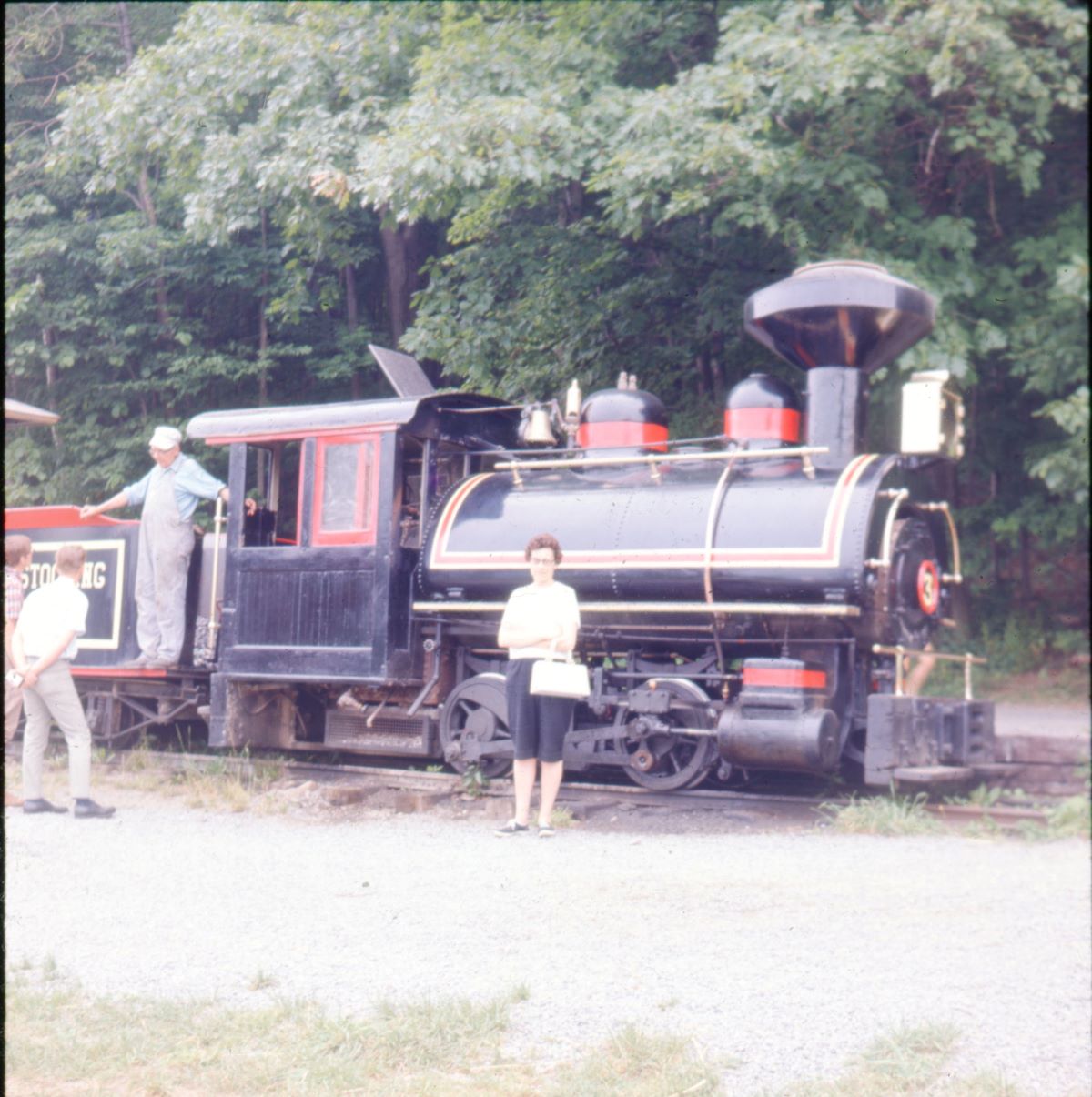