Discussion of the CNJ (aka the Jersey Central) and predecessors Elizabethtown and Somerville, and Somerville and Easton, for the period 1831 to its inclusion in ConRail in 1976. The historical society site is here: http://www.jcrhs.org/

In the course of my studying the history of the C&F Branch, I came across this post on the stillborn Allentown RR which was designed to connect the CNJ in Allentown to the (soon to be) Reading out to Dauphin on the Susquehanna River.

The only material I've found so far is at:

Now, I've followed the line around Windsor Castle - it's very easy to see in places out there - and I've also followed from Trexlertown out to Breinigsville (I live about 1/2 mile north of the ROW in Breinigsville.

However, I still have a few questions:

1. This Wikipedia article says the RDG built on the Allentown RR ROW from Trexlertown to Breinigsville, and from there built a new line to serve the mines out in Klines' Corners/Farmington.

I'm wondering if anybody knows the alignment of the Allentown RR from where it left Breinigsville (original alignment) on it's way to Topton? Never have seen it on a map.

I'm told from Topton to Kutztown, the RDG built it's Kutztown Branch on the Allentown RR alignment.

2. This Wikipedia article says you can see the ROW in the SE corner of RT 222 (Hamilton Ave) and Cedar Crest Ave. I went past there today and I am 90% certain that's true - you can see what looks like a RR embankment/fill just on the right side of Hamilton after you cross Cedar Crest headed east. Anybody have confirmation of this?

3. Also, same article says you can see traces on the north side of Hamilton Blvd between Krocks Road and Grange Rd. I've lived in the area for 7-8 years now, and I'll be darned if I can see anything. Maybe I don't know what I'm looking at? Anybody know?

4. Two other points of interest on the C&F. You can see where the old Allentown & Kutztown trolley line crossed the C&F branch on a bridge just south of Trexlertown. It's alongside Church Lane. And you can also see a rail of the same trolley line sticking up out of the pavement right across from the post office in Breinigsville. It crossed the RDG just west of downtown Breinigsville, right at Wentz Rd (which is the old ROW). I wonder if there was ever a diamond there - not sure if the line was in place when the trolley line was too. Trying hard to find the old ROW of the trolley line headed west out of Breinigsville - it ran along the north side of the creek between Trexler Road and Farmington Road. Can't see anything from the road - might have to hike the creek and see.

Lots of history here in the far west end of the Lehigh Valley!

by frankgaron2
Mon Mar 01, 2010 1:00 pm
Allentown-RR-ROW near Cedar Crest Blvd & Hamilton Blvd.jpg
Just Bing.com'd a few shots here of what I believe shows the ROW in place at Cedar Crest/Krock/Grange Rds. Anybody able to confirm?

by Schuylkill Valley
Mon Apr 12, 2010 12:11 am
Hello Frank,
what you searching here is the row of the Breiningsville branch, which went from Trexlertown to Stetler. This was not the Allentown RR.
The Allentown Railroad history,
On April 19,1853 the Allentown Railroad Co. was granted a charter to construct a line from Allentown to a point on the Philadelphia & Reading Railway between Reading & Port Clinton. Although, a large amount of money was spent on grading and building retaining walls and several small bridges, the only part of this railroad that was even compleated was a small section between Topton and Kutztown. This portion was open on June 10, 1870.

Nice to hear from you - thanks for your note. I'm going by what's listed in Wikipedia. The Reading branch didn't come off the C&F until Trexlertown, which is west of all these locations I'm showing (Grange Rd/Krocks Rd/etc).
Hope that makes sense? I think what they mean by "actually built" is laying ties/rail/ballast, and in that case, that information is correct.

I see "local historian" as your sig - I'd love to learn more about this area (Breinigsville/Trexlertown/Kuhnsville/etc. There is a Lower Macungie HS, but nothing I know of for Upper Macungie. What are your other interests?

If you look at, for instance, a Penna. Geological Survey report from the 1880s (available on Google Books), they still list Breinigsville as being on the Allentown Railroad, and Trexlertown as the site of the junction between the Allentown RR and the C&F RR. The Allentown RR was never finished, of course, but it's clear that they did some or all of the grading between the two towns later used by the C&F.

by frankgaron2
Sat Apr 17, 2010 4:45 pm
Thanks for the info on the Geological Surveys - it lead me to think of calling the Allentown Library and seeing what they could help me come up with. Going to do that on Monday.

I can say that the grade is easily visible in the Windsor Castle area, so there was definitely some work done at least as far as there. I have been told the work included boring a tunnel, but I can't substantiate that.

Would love to find the route laid out between Trexlertown, Topton and Kutztown, as this seems to be the missing link in my information. I'm also hazy on the route from the connection with the CNJ in Allentown to where the first visible remnant is still in place over at Hamilton & Cedar Crest. Funny how you can live somewhere for years and only now find out about such a fascinating bit of history!

by choess
Sat Sep 04, 2010 7:28 pm
Poring over an 1876 atlas, I've been able to nail down an additional portion of the route of the Allentown Branch, this time very close to Allentown. As planned, pre-East Penn, it would have connected with the LV freight main just south of the Little Lehigh Creek. It would have followed the south bank of the Little Lehigh, crossing Trout Creek. In fact, the spur that branched off the Allentown Terminal RR to the Mack truck plant appears to have used the Allentown R-O-W; the atlas clearly shows that the Allentown RR graded the abutment where the now-abandoned spur crosses over Lehigh St. Beyond the Mack factory, the Allentown would have kept to a higher level than the LV's later Barber Quarry Branch, crossed Lehigh Parkway in front of what appears to be a large apartment building, and then over the Little Lehigh in what would have been a rather high bridge. (The abutments there were removed by the Works Project Administration.)

The account of their dismantling suggests that the ROW would have again crossed the Little Lehigh near Lehigh St., which is inconsistent with the plats of ROW and landholdings from 1876. (Apparently the railroad would have had a depot at Lehigh St.) It seems more likely that these were abutments over Lehigh St. itself.

The Allentown Railroad in 1855, work began in earnest on the Allentown Railroad itself. The route chosen left Allentown in a southwesterly direction, passing through Dorneyville, Wescosville, Trexlertown, and Breinigsville. Ducking through Topton, it ran directly through Kutztown and followed Sacony Creek through the hills to Virginville. From thence it followed small streams west and north to Windsor Castle, site of the line's one tunnel. It was to be 1,100 feet (340 m) long, with rubble masonry portals. Leaving the tunnel, it would skirt the edges of Hamburg and push through the gorge of the Schuylkill to reach Port Clinton.

The Reading briefly considered a revival of the project in 1869, but on May 1, 1869, it obtained a lease of the East Pennsylvania Railroad for 999 years. This road would become a permanent part of the Reading system, and the Allentown Railroad's plans were negated forever. The Reading did lay rail on a small segment of the grade from the East Penn at Topton to reach Kutztown, that branch opened on January 10, 1870. The Allentown Railroad remained a corporate entity in the Reading system until it was merged in on December 31, 1945 to simplify the corporate structure of that railroad and to save on taxes, as with a series of other mergers the next year.

A portion of the grades from Trexlertown to Breinigsville was also used by the Catasauqua and Fogelsville Railroad to build a branch to local limonite deposits. This line, too, eventually came under Reading control.

From the news paper now.

Grading of this line is nearing completetion in 1857.

Today you can still trace many Bridge abutments for the crossing of the Little Lehigh Creek were dismantled by Works Project Administration crews in the 1930s. A portion of the grading can still be seen on the southeast side of the intersection of Cedar Crest Boulevard and Route 222, near Dorney Park & Wildwater Kingdom, and on the north side of Route 222 between Grange and Krocks Roads. Turning Leaf Trail in Trexlertown and most of Wentz Road in Breinigsville were built on the part of the grade used by the Catasauqua & Fogelsville. Beyond the end of rails in Kutztown, the grade is intermittently intact along the Sacony creek, and almost continuous from Virginville to Hamburg. some of the tunnel is still there but fill with water and is on private land. 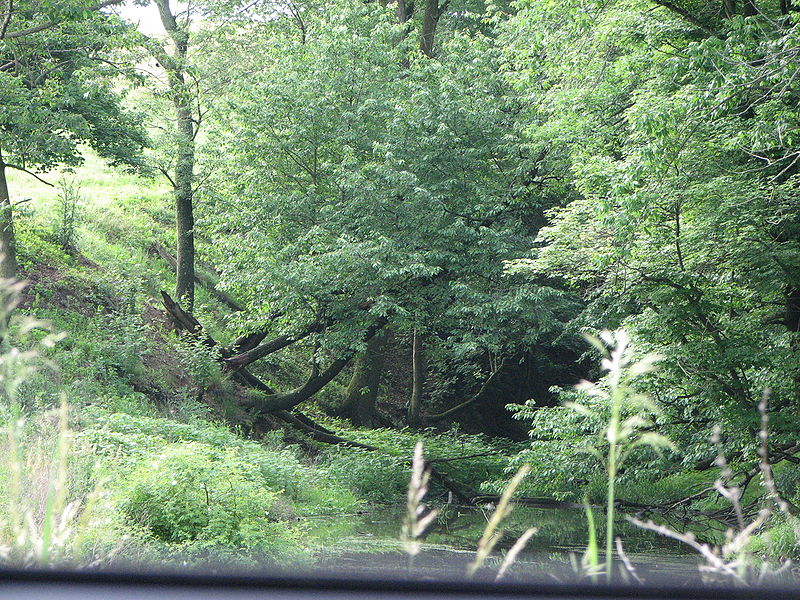 I'm wondering if anybody here knows:

1. What route the line took east of the Hamilton Boulevard/Cedar Crest Boulevard intersection headed towards Allentown?

You can trace the ROW from Breinigsville to that intersection (of course, it's missing in spots), but once east of there I lose it for good. Anybody know?

2. It sounds to me like the Allentown Railroad grade west of Breinigsville followed a different route than the later-day Reading branch built to serve the mines etc out in Klines Corner/Farmington?

Anybody have any idea of the route it took from Breinigsville to Topton to Kutztown? I'd LOVE to find out, as this is a big missing gap in my local RR knowledge.

Thanks again to all who's posted on this fascinating topic!

by RussNelson
Sat Dec 18, 2010 10:53 pm
1857 is kinda old, but there's a chance you can find a map of the line registered with the county clerk's office. It's also possible that some portions were never graded.
http://russnelson.com/#railroads Flickr

by Schuylkill Valley
Sun Dec 19, 2010 1:04 am
Like I said before the tunnel is on private land but it sits in between these two roads Windsor Rd. and Krick Lane. berks county. You can see the row here at Fetters Lane and N. Krocks Rd. it crosses these two roads Mosser Rd. and Wellers Rd. North Hamton County.