About a month back I took a trip on the Ocean from Montreal to Moncton on the Budd stainless steel equipment, and I noted that the dining car has been completely refurbished - new carpet, wall and ceiling panted, chairs re-upholstered, and new lighting. It's really quite nice with a modern colour palette of charcoal, cream, and burgundy.

I'm attaching a shot, though my apologies for the high contrast. 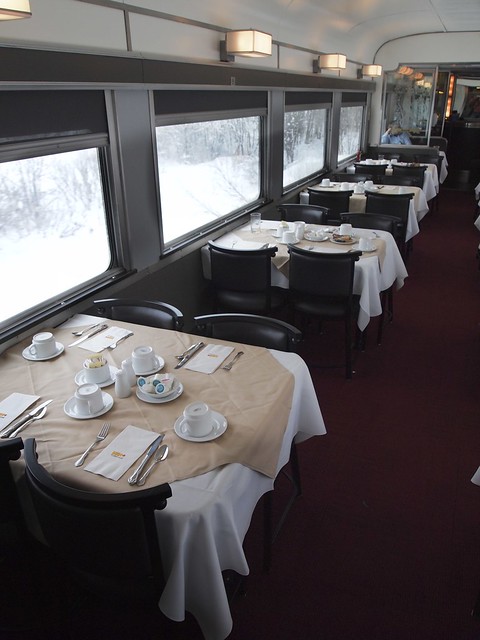 Does anyone have any information on possible refurb of the interiors of the sleeping cars? The upholstery and paint is looking quite tired since it was last re-done in the early 1990s.

Thanks for posting that photo. I was on board the Ocean Dec. 18 this past year, and also snapped a picture of the rebuilt Diner "Emerald". 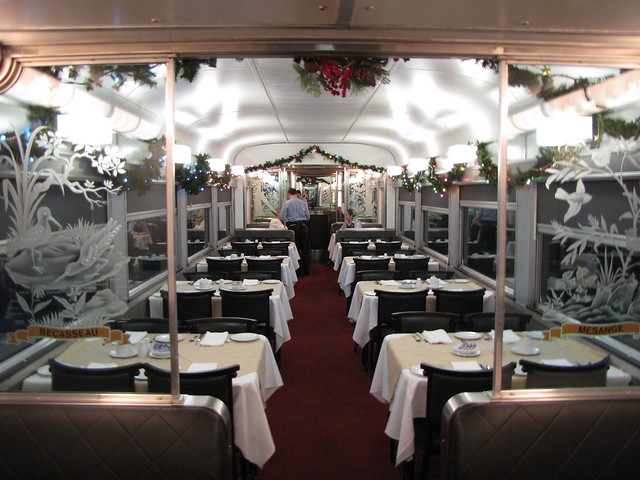 It looks very nice! The rest of the Diners are currently in the process of being refurbished as well, but this is the only one done so far.

Many of the Manor sleepers (used on the Canadian) have been refurbished, and I take it are very nice. VIA is also supposed to be refurbishing some Chateau sleepers and Park cars (with new "Deluxe" accomodations), as well as the Skyline cars. I don't know if there are plans to do all of the Chateaus, but I expect it will happen in the near future. The refurbishment on these cars is definitely due, as I can attest to from recently riding in a Chateau on that same trip. Some of the Skylines are getting a little rough inside too.


Yikes!!! And to think at the time it was considered to be a "Beautiful" train. Maybe we HAVE made some progress after all!!
"Government isn't the solution to our problems, government IS the problem."

kmillard wrote: Yikes!!! And to think at the time it was considered to be a "Beautiful" train. Maybe we HAVE made some progress after all!!

In all fairness, travel by train was seriously out of vogue at that time. Today transcontinental trains are more of a luxury travel market and have the added cachet of being more environmentally friendly than air travel.

But I do remember those hideous blue dining car chairs, even in the early 90s prior to the refurbished equipment. I think another one of the dining cars had the same style of chair but in a bright cherry red. It was awful, but not that unusual from the era when that was newly installed, probably sometime in the mid 70s.

by 3rdrail
Sun Feb 13, 2011 7:25 pm
There is a noticeable difference - no two ways about that ! The understated approach brings out those beautiful glass etchings better, also.
~Paul Joyce~
Moderator: Toy Trains, Model Railroading, Outdoor and Live Steam
Paul Joyce passed away in August, 2013. We honor his memory and his devotion at railroad.net.