Red marker on rear of coaches

Red marker on rear of coaches

I was wondering if anyone could explain why VIA Rail has added a red dot to the end of all of their coaches? I'm sure it is meant as an end-of-train marker, but I wonder why they need it when most (all, apart from some of the Ren cars) have red marker lights on them. Does anyone know the rationale? Since it doesn't light up, I don't know what good it would be at night (even if it's reflectorized, it isn't as good as a marker light), and during the day the end of the train does not become any more visible with that extra dot.

They are on LRC, HEP-1, HEP-2 and Renaissance coaches.

If you're not sure what I'm talking about, see here:

On a Renaissance car: 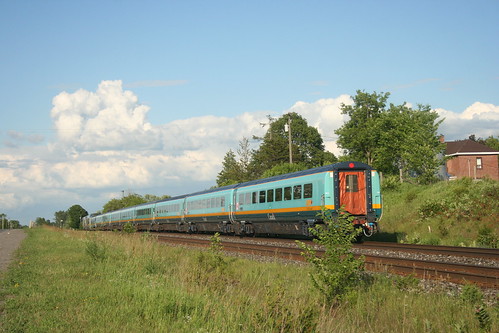 [Image is from Flickr user Bobolink, and is not mine. All credit for this photo is his]

On an LRC coach: 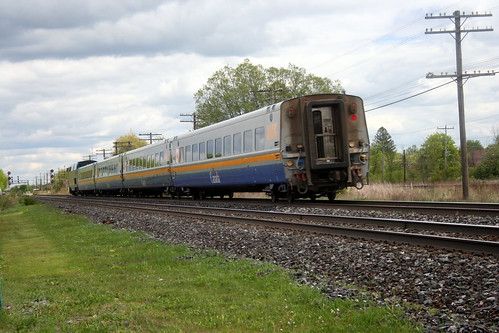 [Again, image is from Flickr user Bobolink, and not me. All credit for the photo is his. His Flickr page can be found at: http://www.flickr.com/photos/bobolink/]


816. FOREMAN REQUIREMENTS - IDENTIFYING ARRIVAL AND/OR DEPARTURE OF MOVEMENTS When a foreman has been authorized to perform track work behind or has authorized a movement(s) to pass through working limits, the foreman must not enter the track at a location within the limits until it has been positively ascertained that the movement(s) have arrived and/or left that location. Such information may be received from the RTC or by identifying that a train has arrived by visually identifying the designated engine and TIBS or tail end remote locomotive. Movements operating without TIBS or a tail end remote locomotive must be identified by direct communication with a member of the crew of such or through the RTC. Note: This requirement is also applicable to an employee providing arrival and departure information to the RTC from a field location


Because of this rule it was necessary for all Via trains to call foremen when they were clear of rule 42 limits, in an effort to reduce the amount of radio chatter and confusion it was decided that if a foremen has the engine number and can identify the movement (engine numbers and red target or light on the rear of the train) then rule 816 has been complied with. Thus the red targets, markers can also still be used but they are simply referred to as a red light on the rear of the train.
Terry Brennan

by Ken V
Sun Jul 04, 2010 8:11 pm
Thanks for clearing this up Terry. It seems silly that you need a big red dot to be able to tell where the end of the train is, but I guess rules are rules.
Ken V. Moderator: Most things Canadian.
Any time could be train time!

by viahogger
Sun Jul 04, 2010 9:21 pm
Not only is it silly it's downright stupid. Why bother getting rid of rule 17 (markers)? Was it bothering anyone? Are they saving money not having to change a light bulb on the rear
of the train? Markers have been in use for over a hundred years why stop now, I know other rules have changed making them somewhat obsolete but in the end you end up having to
create a whole new series of rules and procedures.....why bother?

Ken V wrote:Thanks for clearing this up Terry. It seems silly that you need a big red dot to be able to tell where the end of the train is, but I guess rules are rules.

viahogger wrote:With the removal of Rule 17 (markers) from the rule book a problem was created in regard to another rule for rule 42 foreman. Rule 816 states.

I looks like Rule 19 has changed. In the old rule book Rule 19 stated:

CROR 2004 wrote:19. MARKER(S)
One marker, or two markers when so equipped, lighted and/or reflectorized, will display red
to the rear of every train by day and by night to mark the rear of the train.
19.1 SUBSTITUTE MARKER
A red flag by day or a red light by night will be displayed to mark the rear of a train not
equipped to display markers prescribed by Rule 19.
NOTE: A red reflectorized plaque may be used in lieu of a red flag or light.

Now Rule 19 is about ditch lights:

CROR 2008 wrote:19. Ditch Lights
A train must have ditch lights displayed continuously in the direction of travel when the headlight is required to be displayed full power.

If ditch light(s) fail en route, the movement may proceed to the next point where repairs can be made.

Sorry my mistake the old rule 19 (markers), not the new rule 19 (ditchlights) until next week when it will mean something else

by Engineer Spike
Sun Dec 19, 2010 12:46 am
Besides formen, something has to mark the end of a train. If I have permission to enter the main track behind, I have to know the train is complete.
Transport Canada has some rule about having a reflective area on the end of a train. A marker has the Scotchlite decal, so it can be seen in daytime. If a locomotive is on the trailing end, like a DP train, apparently the dim headlight does not fulfill the rule. On CP, the Scotchclite CP decal is sufficient. The CITX long term leasers do not have this. The result was a fold down red Scotchlite plaque on the walkway chain.

Just the definition of a train.

A freight TRAIN will be light engine(s) or an engine(s) with cars marked by a TIBS, DPU engine on the rear or distributed braking car/container on the rear. If it doesn't have one of those, it's not a train but a transfer.

A passenger train is essentially an engine hauling coaches with people on board.

The red dot is there for foreman to mark the arrival/departure of a passenger train through their limits. It really has nothing to do with the end of train makers at all.

by Lil Red Truck
Mon Aug 08, 2011 7:09 pm
Has anyone besides me noticed the new ping pong paddle end of train devices that VIA is now equipping their cars ? They look like they are stuck in the coupler. This is in addition to the regular red dot up higher on each car.

Lil Red Truck wrote:Has anyone besides me noticed the new ping pong paddle end of train devices that VIA is now equipping their cars ? They look like they are stuck in the coupler. This is in addition to the regular red dot up higher on each car.

Yeah and there a pain in the neck to install! These new Reflective targets that are installed on the knuckle of the last car are a real pain to put on and take off. The targets slip into a hole in the knuckle and the bottom part of the rod that slips through the hole has a small hole for the safety pin to be installed. When we arrive in Ottawa our train has to be doubled over and coupled up to another train. Before we hook up we have to remove the target and that's when the issues start. Many of the buffer plates stick out to much and have to be pushed in with a crowbar to remove the target. It's a tight fit getting it in and out. These targets are in place of the markers which were removed from the rulebook. At first Via Rail just put those red stickers on the end of the car but that hasn't worked out so now we have these removable targets. Apparently the cost of keeping the markers was one that Via didn't feel was necessary considering they took the rule out of the rulebook and also the cost of new wiring on the rebuilt LRC cars forced them down this path. . . . personally I think they should have just left the markers intact and not tried to once again reinvent the wheel! But hey what do I know! Engineer #54 to the headend #56 Pin pong paddle in place Ok to proceed Over!
Terry Brennan

I find these rules interesting...especially noting that most equipment is equipped with marker lights anyway like the LRC car pictured above posted by Timberley...

I understand the "red dot" but it just makes more sense to me by using a marker light...

by viahogger
Thu Aug 11, 2011 10:37 pm
Sorry I haven't seen any pictures online so far as they have only been in use for a little over a week. The reason Via Rail is not going with the red marker lights is because there fazing them out. The rebuilt LRC cars 3315, 3317 and 3319 don't have them anymore and they have been plated over. Technically they are not even required (markers or targets) and are only there to satisfy rule 816 which was talked about earlier in this thread. If we don't have a target on the tail end it is up to the track foreman to ensure that we call when clear of his work limits to allow his men to return to work. It's only there to satisfy that rule no other reason. Like you said however it doesn't make sense. . . stop trying to reinvent the wheel and leave well enough alone, after all it's worked for the last 150 years.

MACTRAXX wrote:VIAHogger: Is there a picture available of one of those paddle "targets"?

I find these rules interesting...especially noting that most equipment is equipped with marker lights anyway like the LRC car pictured above posted by Timberley...

I understand the "red dot" but it just makes more sense to me by using a marker light...