Park Car on the Canadian

by bagofbobbish
Thu Apr 14, 2016 10:17 am
I have no issue with shutting it down at 10:30pm, or even at 9:30pm for that matter. But, it should be open to Sleeper Plus passengers (as it always has been) during the day when the scenery is visible! Email them that you don't like this change: [email protected]

electricron wrote:I hope they don't change the new policy, I like it, they should make it year aaround. ...

There are two reasons why VIA should not adopt the new policy for the off-season.

There would have to be a Skyline car for sleeping car passengers as there is in peak season. (There are two in peak season, one ahead of each dining car.) Given the usually low passenger loads in winter this considerable expense would be unnecessary. Almost all my trips on the Canadian are in off-season and the Park car is rarely crowded except for the few hours at the beginning of the trip ex-Vancouver and in the Rockies.

The number of Prestige passengers in winter is very low and, from first-hand reports, there are sometimes none at all. It would make no sense to run an empty or even almost empty Park car in winter when you have a few dozen disappointed sleeper passengers who must confine themselves to a Skyline car with its inferior lounge space.

Nope! I'm not going to pay extra in the first place, sleeper plus is good enough for me, and I don't want to sleep in the bar car. I'm a country early to bed and early to rise boy.

electricron wrote:
Noise is still noise. It's not so much where it comes from but when it comes! Noise after 10:30 pm wouldn't be wanted by many no matter which car you are on the train. Having a lounge serving alcoholic beverages in a sleeping car is not my idea quiet place.

You are reading too much into the Park Car being a noisy “Bar Car”.....It is not. You’ll find most passengers just having a quit conversation over a drink. Last call is at 10:30pm and if you are worried about someone talking in the corridor as they pass your room in the Park Car......just remember they would also be walking past the rooms in the adjacent Manor or Chateau Sleepers until they reached their own room. It’s really a non issue.

Two years ago I had a Bedroom in the Park when VIA offered entertainment. I spent most of the evening in the Bullet Lounge enjoying it but when I did return to my room.......I really couldn’t hear anything over the usual track noise and ventilation system. Again.....a non issue and besides the entertainment ended around 10pm. 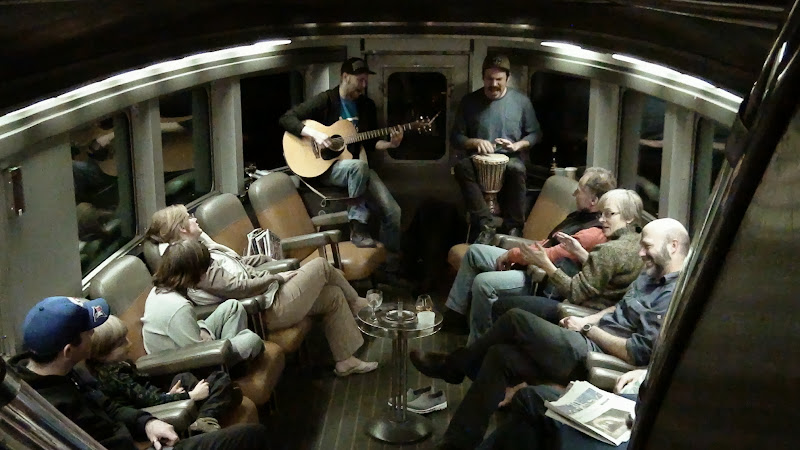 VIA (&CN) have operated several types of sleeper lounges over the years including full lounges and I don’t remember them being particularly noisy. But what I can remember is back in my younger days and riding the “Scotian”......the evening train oat of Halifax for Montreal and partying into the wee hours of the morning in its Coach-Lounge.

Another Lounge noted for its party atmosphere was “Le Pub” on Amtrak's Montrealer......and in particular on Friday nights out of Penn Station with a ski crowd aboard heading for the slopes in Vermont!

by marquisofmississauga
Tue Apr 19, 2016 6:33 am
VIA has responded to the complaints about this sudden change in policy. A member of another discussion site has posted an e-mail he has received.

This is a follow-up email regarding your upcoming trip to travel on board the Canadian (train 1 and/or train 2) in Sleeper Plus Class between May and October 2016.

IMPORTANT: You recently received an email explaining that passengers travelling on the Canadian this summer in Sleeper Plus Class would have access to the Park Car only during certain hours in the evening. Based on feedback from our customers following the announced change, we have determined that the changes could have been managed better and we will maintain the previous practice for the 2016 peak season. Therefore, passengers travelling in Sleeper Plus Class during peak season 2016 (May to October) will continue to have unrestricted access to the Park Car at the tail end of the train.

I would like to take this opportunity to apologize for any concerns that you experienced in anticipation of this important trip. We thank you for your patience while we endeavor to improve our services and meet customer expectations.

by bdawe
Sat Nov 04, 2017 4:19 pm
video of the Canadian arriving in Vancouver on a snowy November day