by chnhrr
Mon Dec 08, 2014 7:00 pm
You see and learn something new everyday. Did this snow blower really work? How many did the NYC have and did any other railroad use these for snow removal?

by Tommy Meehan
Mon Dec 08, 2014 10:44 pm
Below is a reprint of a photo from the March 1961 issue of Headlight, New York Central's employee magazine. It shows a jet snow blower moving west, being pushed by an 8200-series Alco RS3 and clearing Track 2 at Scarsdale NY on the Harlem Division on January 23, 1961. This was the original unit -- powered by a surplus B-36 jet engine mounted on a caboose frame -- and is not the same as the one pictured above. That is a later model.

I believe this snow blower was built at Collinwood Shops around 1960. Normally it worked clearing yard tracks in freight yards but January 23rd (a Monday) was not a normal day. New York Central train service had been shutdown after striking New York Harbor railroad marine workers (ferryboat and tugs) had thrown up picket lines at various terminals and Central crews refused to cross them. Operations were shutdown for seven days beginning on January 17, 1961. The picket lines came down on January 23rd but in the meantime a heavy snowfall had dumped close to a foot of snow on Central tracks. With no trains running it was a real mess. Thus the call went out for the jet snow blower.

The snow blower cleared the main tracks but reportedly problems were encountered in the yard at Putnam Jct. (Brewster). At the time employees said the blower -- which did not melt snow but literally blew it away -- did create some condensation and the following morning some of the switches were frozen up.

Other Central employees have told me the blower (probably one of the newer models) was used at Dewitt Yard in Syracuse several years later following a monster snow storm. That time the problem was the snow blower was picking up things like discarded air hoses and brake shoes and whipping them around. The track engineer in charge finally had to order the blower operation be discontinued before someone got seriously hurt.

by shlustig
Tue Dec 09, 2014 8:36 am
After the original snowblowers which required a locomotive, tank car for fuel, and full crew, the NYC produced some self-propelled ones that operated as M/W equipment with no engine or train crew. Some of these may still be in use.

by chnhrr
Tue Dec 09, 2014 3:02 pm
Thanks all for the info. Great photo Tommy. It appears that that NYC was satisfied with this system, since it developed this snow removal system further. Were rotary snow removal systems still used in the remaining years of the NYC?

by Tommy Meehan
Tue Dec 09, 2014 5:37 pm
The New York Central had two rotaries. One was X-659, built by Leslie in 1889 and acquired when Central took-over the Rome Watertown & Ogdensburgh in 1891. I believe that is the one pictured above. X-659 survived into Penn Central as PC 60021, and served as Conrail and CSX 64599. It was retired around 2001 and acquired by the Western New York Railroad Historical Society. It is preserved today at their rail museum (or was until recently) in Hamburg NY. This link will take you to a page with a view of 64599 after the museum acquired it.

by Tommy Meehan
Tue Dec 09, 2014 6:09 pm
I personally remember the late winter afternoon that the jet snow blower came up the Harlem Division. I lived about a quarter-mile from the right-of-way near I-287. It was a snow day from school. President Kennedy had just been inaugurated. It was very snowy, the snowiest winter we'd had for many years.

I could hear what sounded like a jet airplane taxiing from south to north near the Bronx River Parkway and I knew instinctively it was something on the New York Central. I begged my Mom to let me go take a look but it was too far, too cold, too late (almost dark) and I was too young (ten-years-old) and she said no.

Here's a link to the Canada Southern site and a story about how Central fought winter storms. The story is on page three of the February 1968 issue of Central's employee magazine Headlight. Note the date, this was the last Headlight ever published by NYC because on Feb. 1, 1968 they merged with the Pennsylvania Railroad creating Penn Central. On page two of the issue the editor notes that "As we went to press" the US Supreme Court had given the merger final approval.

These units were a product of the Test facility at Collinwood, at a time when NYC was quick to tout every innovation that proved it was indeed, "THE Road to the Future".

An early "in-house demonstration" was arranged, reportedly at Collinwood. Many "suits" were in attendance.

At the appointed moment, the jet was started, with the nozzle angled down; there were expectations of awesome power as the jet "spooled up"...

With little or no experience in operation, it seems the downward nozzle was angled a little too steep. As the jet powered up, the light (nozzle) end of the car lifted off its truck, blasting track ballast and the usual yard detritus with great force in every direction. Worse, as the operator struggled to regain control, the suspended end of the car started to rotate, as the suits scattered in all directions. The account described those would-be Olympic sprinters, in a manner seen neither before nor since.

IF TRUE, I would hope someone who follows this Forum might post what they know (or have heard).

by BR&P
Wed Dec 10, 2014 9:25 am
I must respectfully disagree with something which has been stated here, and also in a previous thread which I started in 2008 about the old snowjet conversions. To quote Chief Troll from the older thread, "Those were not really conversions. Cleveland Technical Center, the NYC research subsidiary at Collinwood, mounted the jet engines and duct work on flat cars, and mounted old wood caboose car bodies, complete with cupolas, on the other end of the flats to house the operator." While it may well be true some, or even most, were made by putting the jet and part of a caboose body on a flat car, I strongly believe at least one or two were made right on the caboose itself. There are several photos around of those old units, most of fairly poor quality. But some show enough detail to support my claim.

* In the photo below, notice the short length of the machine - it appears shorter than even a 40 foot flat would be.

* Note the spacing of the trucks. Far too close together to be a flat car - and just about exactly how the old cabooses were spaced

* While the end closer to the camera has had the end squared off and stirrups and grab irons applied (a fairly easy change), note the far end still has the original wooden caboose steps and end handrails. It seems unlikely to me that - if things were being transplanted to a flat car - they would go to the trouble of cutting out the end of the flat car and then installing the wooden steps and end platform off the caboose. It would have been far more expedient to fabricate and weld steel steps.

* Note also the underside of the car in the photo, where you can clearly truss rods. Compare those truss rods with a 19000 series caboose and they are identical. By the time those blowers were made, truss rod freight cars were pretty scarce, if not gone altogether.

A caboose photo taken at about the same angle for comparison 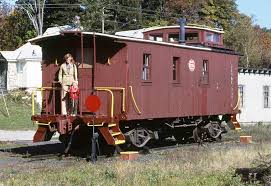 Again, I don't doubt that flat cars were used at some point. But I believe that at least one was made directly on the caboose frame itself.

by R Paul Carey
Wed Dec 10, 2014 10:19 am
As can be seen in this thread, NYC's DSI-20 was indeed a heavy flatcar-based snow jet (note the heavy steel frame and unusual - for NYC - Andrews trucks). Methinks this might have been the second such snow jet on NYC (i.e., "heavy enough").

by BR&P
Wed Dec 10, 2014 10:30 am
Paul. the relatively light weight of a caboose would certainly suggest the possibility of one rearing up like an angry dragon as you mention above!

If that happened today somebody would be making a video of it, too bad it was not recorded. I can imagine the "White shirt 100 yard dash" was something to behold!

I forgot to include the link to the previous thread I mentioned above. http://railroad.net/forums/viewtopic.ph ... t=snow+jet" onclick="window.open(this.href);return false;

And yes, those things certainly did fling anything which was not fastened to the earth! Ballast, tie plates, chunks of old ties, spikes....any sort of debris imaginable would go flying. You quickly learned to give those machines a wide berth if you were out in the yard when one was working.

Looking through my notes, I have part of the answer right in front of me, which I acquired some time after that 2008 thread. I show "NYCHS March 75 has pic of snow jet X27208 made from caboose 18002"

Now unfortunately I don't show whether this is the "headlight" publication by the society or something else - I can't say just where I got that. It may even be the article that pic I posted above came from, all I did was search images. But at least we have the number of one of the jet blowers and the "donor" caboose it came from.

by NYC_Dave
Wed Dec 10, 2014 12:46 pm
The photo was in the 1st quarter 1975 NYCSHC Headlight. The caption reads "Snow Blower #X27208 was rebuilt from caboose #18002 in August, 1963 at N. Y. C.'s
Collinwood shops. Besides the caboose, the main ingredient of rebuilding was government surplus G. E. J-47 jet engine modified to burn diesel fuel supplied from tank car coupled behind."

by BR&P
Wed Dec 10, 2014 1:10 pm
Thanks Dave! Apparently I have that issue buried in some box or other, found it long enough to make those notes, then lost it again!

by Tommy Meehan
Wed Dec 10, 2014 3:51 pm
Here's another photo of the jet snow blower in action on the Harlem Division on January 23, 1961, taken probably about thirty minutes after the photo at Scarsdale. I believe the location is North White Plains -- it looks like the train is still on Track 2 -- with the roof of Circuit Breaker House No. 44 just visible behind and between the cupola and the tank car dome. This is right at the entrance to Yard A (the MU Inspection Shed) and opposite the yard office. Photo is from the March 1961 issue of Headlight, New York Central's employee magazine.

I'll leave it to the experts to decide whether that's a caboose frame or not. However I did see on a GE web page that the J47 turbojet engine Central used was capable of producing up to 5,600 lbs. of thrust. That'll get you airborne in a hurry!