Millwood Station to be torn down

Otto Vondrak wrote:I hate to drag up an old thread, but the Millwood Station is again a topic of debate. Property owner (lumber yard) has no interest in improving the property and town wants the structure GONE.

Also updated the title to encompass all Put stations.

by Dieter
Tue Jun 07, 2011 10:10 am
What happened right after they tore up the tracks in that area? The telephone poles were cut down as close to the ground as possible with chainsaws and removed.

The ties -- There's a business on the south side of 120 by the crossing, I don't remember the name of it anymore. It was an agricultural supply place, you could get Purina Chows for every kind of critter there, it's the black building across from what was a Sinclair station.....

At that business, the ties were piled up as high as you can imagine, they were for sale for FIVE CENTS A PIECE. Lots of homes in the area used them and can still be found, where these ties were used for retaining walls and such. At my parents, several were used to construct a bridge, one of them is still in place, you can still smell the creosote if you get your nose down to it, there's no rot, and guess what? A DATE NAIL from 1940 is still on it!

Through the 60's, it was easy to find spikes all along the ROW, the crew was pretty sloppy about cleaning them all up for scrap. I'm sure anybody with a cheapo metal detector could find them an inch or two down in the ground today, there are probably LOTS of them still out there. There are pictures of the crew removing the rails and loading the rails onto gondolas, but you never see any pictures of removal of the ballast, and they sure did. All that was left in the 60's was a black trail from the days of coal and cinders.

D/
Video
If the problem is Digital,
The Solution is ANALOG!!

by Otto Vondrak
Fri Jun 10, 2011 5:12 pm
The lumber yard owns the station and the property, and they refuse the play ball with the town, with preservationists, with anybody. The owner must be a sick man.

Otto Vondrak wrote:The lumber yard owns the station and the property, and they refuse the play ball with the town, with preservationists, with anybody. The owner must be a sick man.

This sounds like the situation that took place in Torrington, Connecticut which lost passenger trains just a few months after the last run on the "PUT". The station property was purchased by the E. J. Kelley Company and sadly they did not have any care for the property except for storage and parking of their vehicles. In the Torrington case, the old station was finally demolished earlier this year.
Noel Weaver

by Tommy Meehan
Sat Jun 18, 2011 9:44 am
I read a couple of the articles in the local paper and the property owner seems somewhat supportive of preserving the station but he doesn't want to pay for it. Apparently will be expensive. More to the point probably, he said that, having dealt with the local authorities previously, he's leery of getting involved with what he believes will be a lengthy and protracted process to get all the necessary permissions and permits. I can't fault him really.

What is sad to me is, there is so little local interest in this. That's what is needed to save the station in my opinion, but the interest is not there.

Why so little interest locally? For one reason there's probably hardly anyone left in Millwood who goes back to when the building was used as a station. It's over fifty years since the passenger trains stopped running meaning someone who commuted regularly from Millwood would be close to eighty years old. And the fact is, there weren't very many riders at Millwood even when the trains were running.

by Jeff Smith
Sun Jun 19, 2011 1:27 pm
I think the trick is to "sell" it as a trail stop (edit: I originally had "train", which might otherwise make sense, but not 50+ years after the trains stopped!). A private interest owns it, he'd like to be rid of the problem but not the property, and doesn't want to bear any expense (and the only expense he'd be liable for is to take it down if the town forces him under some form of nuisance ordinance.

Since it's the county trailway that it's on, I think they need to pay for some type of easement for use of the building and some limited parking. I understand the current owner also has parking issues. Perhaps this could be solved as well.
Next stop, Willoughby
~el Jefe ("Jeff Smith Rules") :: RAILROAD.NET Site Administrator/Co-Owner

by PUTNUT
Tue Jun 21, 2011 5:27 pm
Some information on a question from a while back. The Baldwin Place station burned in 1978. I was one of the firefighters on the scene that night. It didn't burn down but it was gutted. I had to cut a hole in the roof to ventilate the building. I do remember that the roof was was rather structurely sound even after being abandoned for twenty years. When we left, it was just a burnt out shell and was torn down shortly afterwards. The freight station is still there near the rail trail.
I know the Mahopac branch isn't part of the Put, but in 1968 there was at least one mile marker still standing between Lincolndale and XC crossing where the row passed behind Shenorock.

by Tommy Meehan
Tue Jun 28, 2011 7:36 pm
I read another article about the Millwood passenger station in the local paper. It seemed pretty credible because it was primarily the reporter questioning various local people and then printing what they said.

First of all, I was a bit surprised to discover that it was a semi-official group called the Millwood Task Force that first raised some questions about the old station. The task force informed the Town that the building is "beyond repair" and "an accident waiting to happen." A building inspector surveyed the station -- it's on private property, not on county land -- and issued an order to the property owner to repair or tear down the building.

The station is part of a commercial holding which also includes a nearby lumber dealer (Millwood Lumber).

The property owner Leo Rotta said he thinks the building should be renovated, that "it's a cute little thing," but as a commercial property owner doing it himself makes no sense. The building needs major work, the local review process is "a minefield" and there seems little way he would be able to recoup his investment.

Rotta says he currently maintains the grounds around the building. He hopes one of the parties that have expressed interest in the building may yet decide to get involved.

Incorporating it into the adjaecant North Trailway and having Westchester County assume control is probably the station's best hope.

One other thing: People using the trail do park on the property but Mr. Rotta says he has no problem with that. It's Lou Russo of the Millwood Task Force who objects to the parking.

I must! I can't help myself! I must be on a administrator power trip!

Seriously, there was other worthwhile information in here on other Put stations, and some stuff I added from other threads to better organize a topic on Put stations.
Next stop, Willoughby
~el Jefe ("Jeff Smith Rules") :: RAILROAD.NET Site Administrator/Co-Owner

by Tommy Meehan
Wed Jun 29, 2011 7:22 pm
All this talk about the Millwood Station and no photo? I got curious although the best I could do was a screen capture of a Google maps Streetview:

It's a lot smaller than I imagined but also a lot nicer too. I don't know how old the photo is (not more than three or four years I'd guess) but the building looks to be in pretty decent shape. 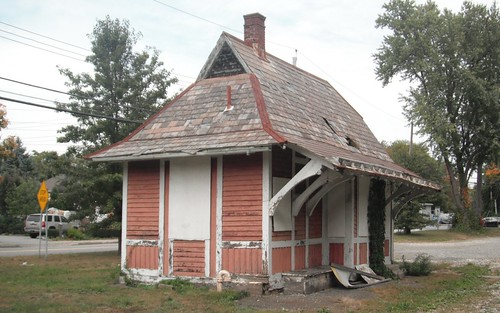