by mbrproductions
Fri Jan 14, 2022 12:30 pm
Just read an article, apparently MassDOT recommends for the Middleborough Line to be extended to Bourne,
https://www.capenews.net/bourne/news/ma ... 5c57e.html
People who complain about train horns are the real nuisance. 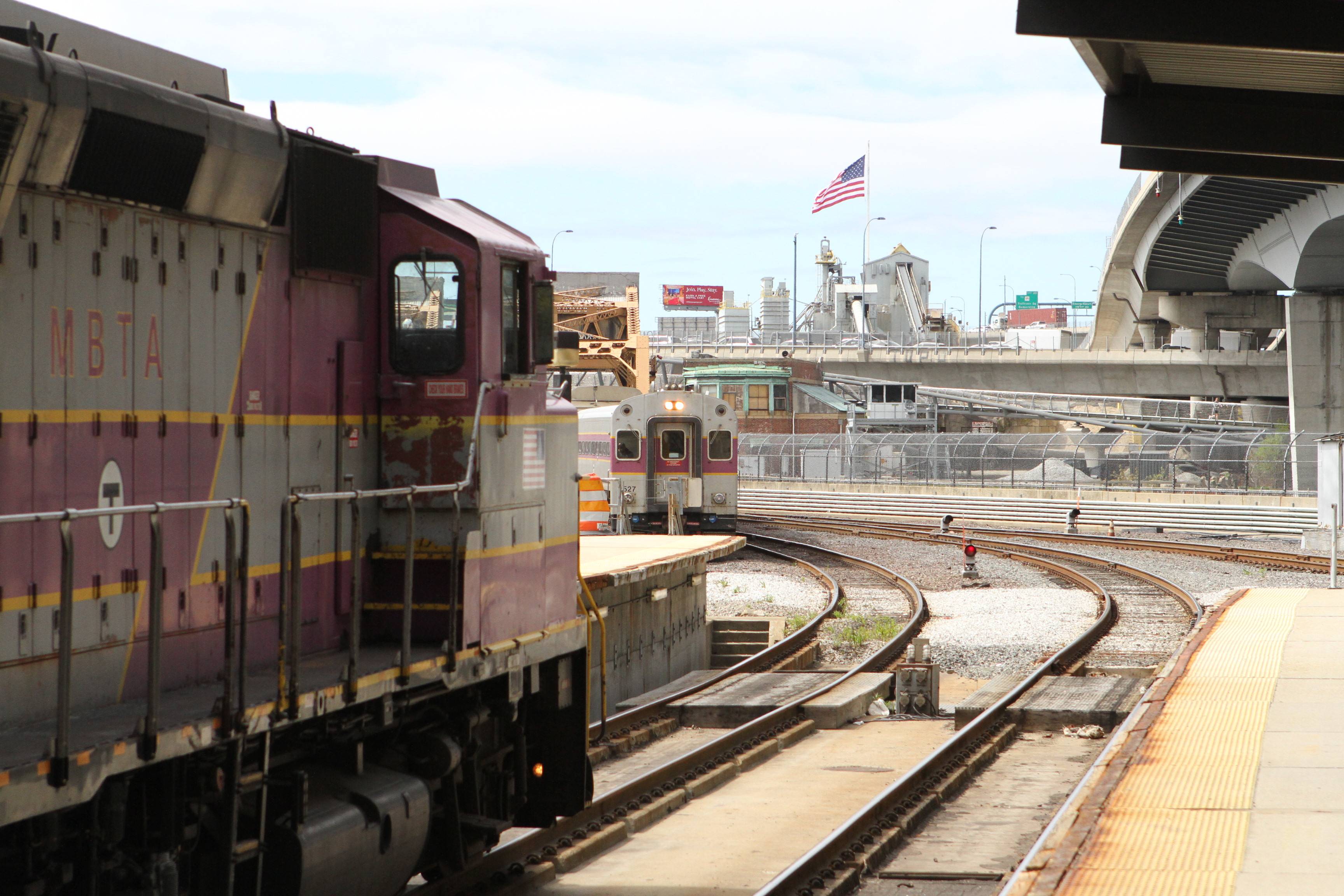 With limited available capacity to support expanded service on the Middleborough Main Line and at
Boston South Station, Alternative 1 focused on providing weekday commuter service to and from
Buzzards Bay with a stop at Wareham and transfers between Cape trains and South Coast Rail trains
at the new Middleborough Station. South Coast Rail Phase 1, which will restore MBTA commuter rail
service in 2023 between Boston and southeastern Massachusetts, could enable this transfer
connection at the new Middleborough station.

by west point
Mon Jan 17, 2022 1:23 am
IMO transferring makes sense as only one rail route need full complement of cars. That is maybe 4 cars to cape cod and regular consist of 10 - 12 cars to south coast which may even have another short connecting train.

by BandA
Mon Jan 17, 2022 7:12 pm
The reason for transferring at Middleborough is less savory - because of capacity limits at South Station, along the Southeast Expressway / Red Line Braintree Branch, and that South Coast Rail phase 1 is programmed to be in place before extension to Cape Cod.

by Trinnau
Mon Jan 17, 2022 11:14 pm
The bottleneck is definitely more Braintree-Boston than South Station itself, though only by a small margin.


west point wrote: ↑Mon Jan 17, 2022 1:23 am IMO transferring makes sense as only one rail route need full complement of cars. That is maybe 4 cars to cape cod and regular consist of 10 - 12 cars to south coast which may even have another short connecting train.

MBTA regular service to SCR will likely be in the 5-6 car range with double-deckers. The largest MBTA train on the system was 9 cars pre-COVID, and there was only 1 of them. Most are 5-6 cars in length.

by BandA
Wed Jan 19, 2022 1:27 am
Is 500 parking spaces at the new Middleborough train station enough? They will have to build a second, 400' platform for the Cape Cod shuttle train, and the Cape Flyer will have to either use the old, separate Middleborough station, do a backup move, or construct a third platform across the parking lot and disconnected from the other two. This platform is supposedly possible to build but has not been designed. I've only slogged half way through the document, but I saw a hint that they want to use the existing station as a Park & Ride lot.

This is the station design from the 2018 Draft Supplemental Environmental Impact Report. It's probably had small modifications since then, but this is the basic design: 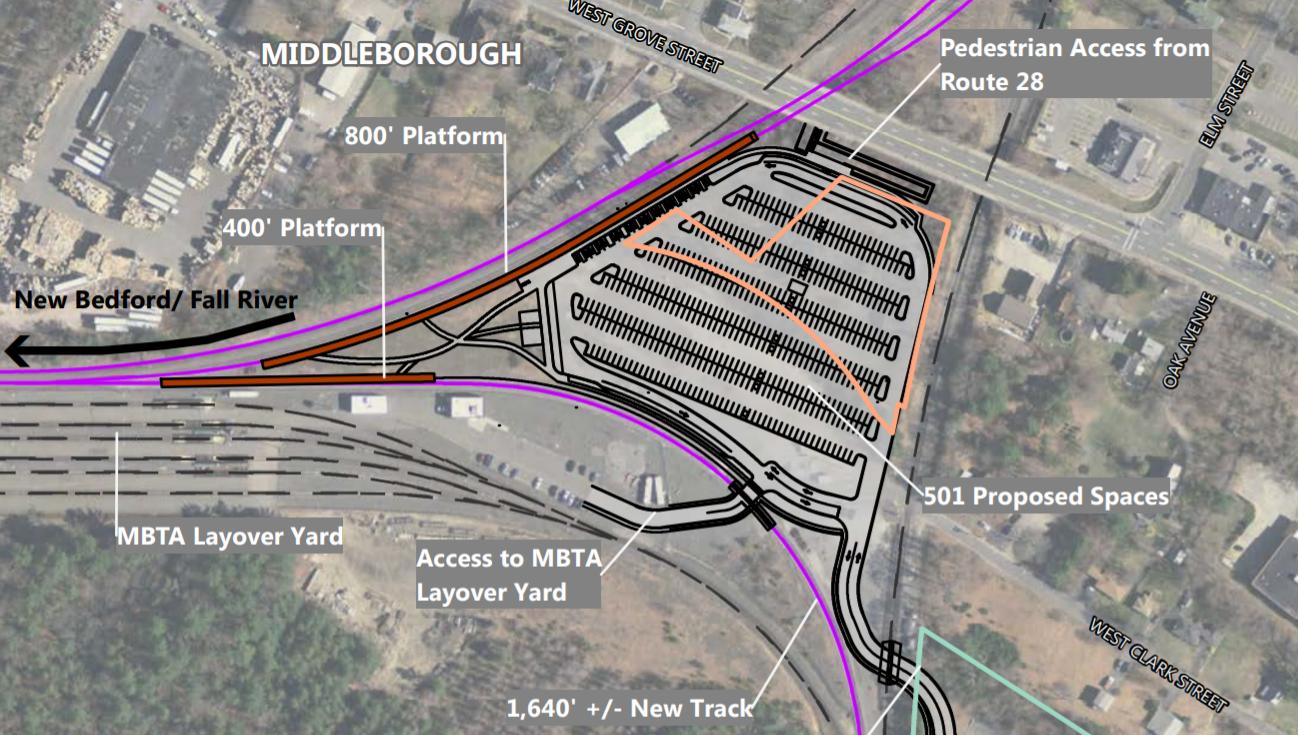 The potential shuttle platform is placed for nearly cross-platform transfers to South Coast Rail trains. Should it eventually be desired to bring the CapeFLYER (or non-shuttle commuter service) to this station, there's plenty of room for a new platform on the east side. However, I suspect that the CapeFLYER will never move here alone - Middleborough ridership is so minimal (less than 5 passengers per CapeFLYER train) that it's not worth the cost of even a wooden platform.

construct a third platform across the parking lot and disconnected from the other two. This platform is supposedly possible to build but has not been designed.

A third platform will eliminate the need for a transfer for Cape Cod - Boston commuters, but then again, the first 800 foot platform would be useless if this Cape Cod extension ever happens because Fall RIver/New Bedford trains will be utilizing the Dighton and Somerset (Stoughton) route, and no more trains will terminate at Middleborough, unless the line runs like the Framingham/Worcester line where zonal express trains make few or no stops until Middleborough, then go to Cape Cod, and local trains that terminate at Middleborough make all stops.
People who complain about train horns are the real nuisance.

by Commuterrail1050
Wed Jan 19, 2022 10:03 am
They will have a third platform. The current middleboro station if they don’t plan to get rid of it completely. We will have to see what they plan on doing once next year comes.

by mbrproductions
Wed Jan 19, 2022 10:49 am
I sometimes wonder why they didn't place this new station further up the line before the wye, near Center Street or where Station Street becomes Courtland Street, both are closer to the center of Middleborough than the new station currently under construction and would work for temporary Fall River/New Bedford service, Cape Cod service, and service that terminates at Middleborough, and its proximity to the town center makes it a better location overall, such a missed opportunity
People who complain about train horns are the real nuisance.

by Trinnau
Wed Jan 19, 2022 1:31 pm
The Cape study suggest the potential to build the 400' platform on the east side of the parking instead of on the south side. This would eliminate a "third" future platform if/when SCR service re-routes via Stoughton and Middleboro could be then extended to the Cape. In the interim, transfer is still needed at Middleboro if both SCR and Cape service run together because there simply isn't enough capacity north of Braintree for more trains. It could just be done on the east side instead of the south with a slightly longer walk.

by BandA
Wed Jan 19, 2022 1:58 pm
Putting a 400' platform on the south side makes the most sense for Phase 1. Assuming it is going to take decades to go from South Coast Phase 1 to 2 and Cape Cod Phase 1 to 2 it makes sense to build it as planned. Can they make the platform "modular" so it can be moved ala the skunkworks Bourne platform?

by Trinnau
Wed Jan 19, 2022 3:35 pm
All depends on when Cape Service is slated to start and where SCR phase 1/2 is at. The overall cost for initiating Cape service is at least $70M from according to the study, $100M if it crosses the canal, and requires infrastructure work that won't even be started until at least after SCR phase 1 is in service. If the service overlap only ends up looking like a few years it might make sense to just build east. Not sure a few hundred feet of extra transfer distance will make or break the service.

A larger platform probably can't be built as "simple" as Bourne is, and even if you could move the platform itself in panels you would lose things like foundations. Not sure the cost/benefit is there to building it and then moving it (cranes, trucks, etc needed to do all the moving), but it's certainly not physically impossible.

I recommend reading the relevant portions of the DSEIR. Starts on page 2-31 (page 74 of the PDF).

interesting, I have never read that report before and the location they proposed was the exact same that I did. From what I understand, they chose not to build at that site because of higher operating costs and limited parking space, as well as the impact on local traffic in the area, its kind of a shame really, that site looked like it had good potential.
People who complain about train horns are the real nuisance.