in those videos, is MARC #68 being prescheduled as an additional engine (they stole it from the yard) or was it spur-of-the-moment or is it impossible to tell?
MTA project completion date calculator Take the MTA 's estimate for completion and add 8 years to that.

And in dispute, too.

Technically those units were not leased by the MBTA, they were leased by their then-operator: Mass Bay Commuter Railroad (partnership of Veolia + Bombardier + Alternative Concepts, Inc.). MBCR lost their contract renewal this year to Keolis, who took over ops on July 1. And lost it acrimoniously since they were threatening everyone in earshot with lawsuits through the first half of the year before slinking off out of town at the handover. Since it was a 3-way partnership formed for ONLY the singular purpose of winning the T commuter rail contract, MBCR are now a defunct organization save for whatever skeletal staff is still processing closeout paperwork.

Amidst all this drama, MBCR "forgot" to take those 3 inoperable hunks of junk with them when they split or notify MPI that the lease was up and they could come fetch 'em. So the now-defunct commuter rail operator that was making legal threats to anyone and everyone is the entity that has to pay the waybill for taking those back.

The T's breaking in its brand new locos and brand new coaches, and doesn't have any space left at their primary maint facility with all the new overlapping with old. These inoperable MARC Geeps that aren't theirs were taking up valuable real estate. But the rival operator, Keolis, that's now in charge was afraid to move them out-of-district because they're MBCR's property and they were one of the ones threatened with suit. So...the T had already taken out some rent for unused yard space with the shipping terminal shortline at Port of Davisville, RI near the last Providence Line commuter rail stop to stuff 60 of their retiring coaches and retiring locos in mothballs for a year until the scrap and re-sale bids go out. How to solve the problem of getting them offsite, but in-district so MBCR's lawyers don't get all stabby? Why...they just lashed them up to a gigantic non-revenue move of dead coaches to Rhode Island. If MBCR ever wants to send MPI the bill to go pick their property up in Rhode Island, they're free to do so. Otherwise they'll just rot and get vandalized down there until the storage lease in the freight yard expires, the coaches/locos they're being stored with are all gone, and they get declared abandoned or MPI goes after the ex-MBCR partners for monetary damages.

Kevin.D wrote:I thought one of the GP39s had its HEP power plant removed, and was to move on to one of the state-owned freight shortlines in the eastern peninsula. Since the state owns the locomotives that were not traded in, it should be free to move them around to any state-owned trackage operated by a contract operator, right?

That sounds about right. The original plan was to eventually use them for freight service.

I am very late to the conversation here. I work for the MDDE. There was a rumor several years back that we were going to be getting five of the standard cab geeps from MARC. 4 were to be used in freight service and one as a parts unit. Obviously, the trade never happened. These were supposed to replace our three RS3m locomotives. However, the state and the MDDE never came to terms on who would pay for regearing and deturboing these locomotives. The idle speed alone on the geeps was 16 mph. We are limited to 20 mph max on our rails, and we have spots where we are restricted to 10 mph.

In the meantime, we keep on "trucking" on with those 3 RS3m locomotives. They are workhorses and in all honesty, so long as they are running, are perfect for the vast majority of our operations. 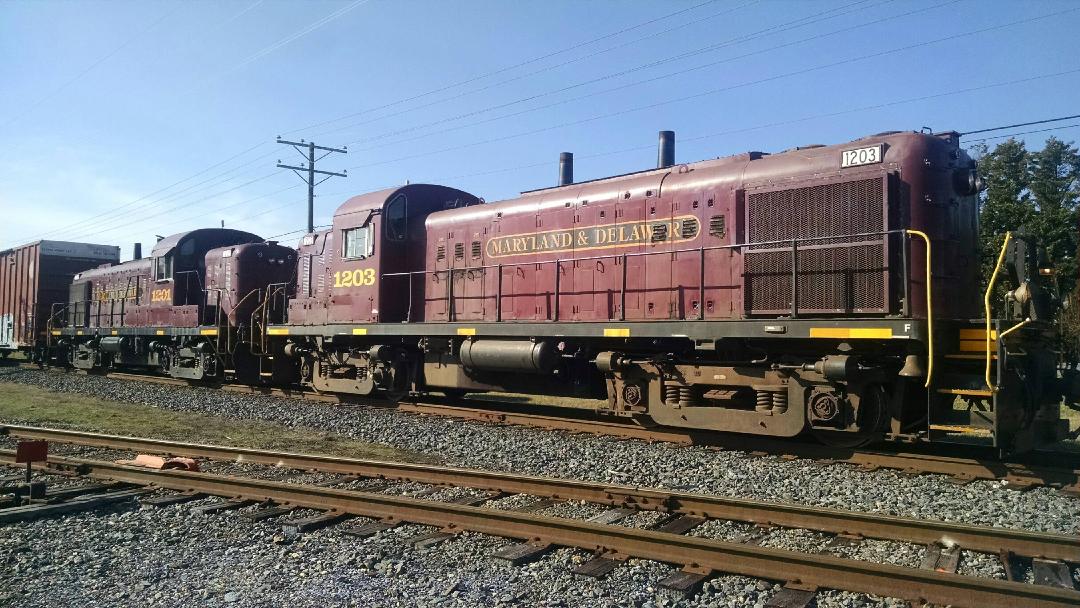 Honestly, the MARC GP40WH-2's are still my favorite diesels.

by atsf sp
Thu Sep 24, 2015 2:59 pm
A couple of days ago I saw a GP40 behind a MP on the Brunswick line on a train out of Frederick junction. Anyone know which unit this was?
"Why would you take a train to go see another train?"
Some people just don't understand.
My Photos

by STrRedWolf
Sun Oct 25, 2015 12:52 pm
The is only one MARC GP40 in operation, and that's Engine 68. It's mainly used as the "Odenton Protect" and is usually stationed at the Amtrak yard south of the Odenton MARC station. It started it's current "tour of duty" in 2010 after the breakdown of MARC 538 in 100+ degree F weather. The Baltimore Brew still has a copy of the incident final report.

It's an elegant chunk of hardware, that is unfortunately used "often" (maybe twice a month on average) to rescue a MARC or Amtrak train. If you see 68 out on a line, you'll know there's trouble on the line.
I want to know, have you ever seen the train, coming down, on the rail?
https://throng.band

by STrRedWolf
Sat Nov 21, 2015 10:44 pm
That usually means they had to wye the train at BAILEY/LEADENHALL interlocking for some reason, usually because the cab car had a fault or breakage. So for safety they reversed out through LEADENHALL, cleared it, and then forward out to Union Station. It makes the train a few minutes late, though.
I want to know, have you ever seen the train, coming down, on the rail?
https://throng.band

by UKRAILFAN123
Thu Mar 17, 2016 12:54 pm
I dont know if this is the correct section for reporting out of normal moves. I think this is Ex MBTA 66 seen today 17 March in an East bound freight at Berea OH. Picture courtesy of Railstream
You do not have the required permissions to view the files attached to this post.

UKRAILFAN123 wrote:I dont know if this is the correct section for reporting out of normal moves. I think this is Ex MBTA 66 seen today 17 March in an East bound freight at Berea OH. Picture courtesy of Railstream

Yup. Picked up a few days ago.

UKRAILFAN123 wrote:I dont know if this is the correct section for reporting out of normal moves. I think this is Ex MBTA 66 seen today 17 March in an East bound freight at Berea OH. Picture courtesy of Railstream

Yep, that's the ol' MARC 66 GP40WH-2. They got sent up to MBTA to try and get their commuter rail service into a more reliable state. I think they're currently in a state of limbo due to the switch-over of operators.
I want to know, have you ever seen the train, coming down, on the rail?
https://throng.band