by oibu
Tue Sep 22, 2020 3:52 pm
Does EMRY/MNRY operate 907, 908, 909, and 910 all daily? Seems like it must be close to it but I'm not sure if it is literally 7 days for everything or not. If so that is good to see as a few years ago it was only "most days, as needed" with little real schedule. Probably as much as anything, CMQ and now CP regaining traffic levels and stabilizing their operating schedules and increasing frequency of trains on the Moosehead (i.e., daily each was vs 3-5 days each ways etc) has helped with that.

For sure, they are pretty predictable within a window of a couple hours each time they run from everything I see/hear.

Also would anyone know what runs when on the Oakfield-Madawaska section? Assume turn crews from Madwaska and Oakfield still meet and swap at Nixon or thereabouts? daily, or just 5-6 days up there?

Certainly is good to see the progressive improvement on these lines after the Railworld debacle, just wish CMQ could have stayed around longer. Even if much of the MNR traffic is chip and wood moves "internal" to Irving, it's still a world away from short trains every other day under MMA.

by KSmitty
Tue Sep 22, 2020 6:39 pm
907/908 are 7 days a week now. running fairly consistently, schedule wise, with the westbound crossing the border late afternoon or evening. Eastbound out of BJ in the 14:00-16:00 range.
909/910 are running at least 6 days a week, may take Sundays off, but have been south out of Oakfield the last several Saturday mornings early. Sherman area around 7-8AM. I met the southbound in Siberia back on Labor day weekend about 7:30 or 8.

I recently asked a friend about Oakfield-Fort Kent, I was hoping to chase that section this fall. Was told the jobs between FK and OK are running 5 days week M-F. Track is all, or largely, 10mph north of Oakfield. Fort Kent and Masardis are the bases of operation, meet at Nixon and turn for home, running mostly in daylight, though the shorter days make that less and less true as fall goes on. Masardis-Oakfield is a 3rd crew, I gathered running mostly after dark.

Houlton was a Friday thing now, if I remember what I was told correctly.

Presque Isle/Easton is a Saturday thing, on at Masardis, run to PI, switch the airport, then to Easton if they have time. If they time out in PI I think a recrew comes Monday to finish up the branch, but not really sure.

by oibu
Tue Sep 22, 2020 7:12 pm
Thanks Ksmitty, good to know all of that and good to see that frequency of operation is supported even if track is 10 MPH on the north end.

So they run out of Ft Kent instead of Madawaska now? Does that mean Madawaska-FK is yet another "turn" segment and Madawaska-Van Buren runs as before? And I assume by "Masardis" you mean Squa Pan- is the RR calling it "Masardis" now?

Any idea what OD times are for FK and "Masardis"? If it is a reliable 5x a week in daylight (more or less) it is tempting to try and do more on the old Ashland Branch this fall for me as well!

I would have to check to be sure but I thought have seen reports of Sunday 909 and or 910's. Maybe Sundays are hit/miss for them depending on traffic?

How reliable is that 1400-1600 for 908 out of BJ? I was under the impression it was a little later than that but may be wrong. From what I've heard 907 usually is more of a 6-10- pm coming into the US recently but I think that is/was due to container inspections by customs and I think times are getting at least somewhat earlier, so the late afternoon-early evening at Vanceboro is probably how it "should" work but in practice often seems to be a couple hours later at least getting -out- of Vanceboro.

Your scenario for the PI branches sounds about right based on what very little I see/hear about it, I saw some photos from sometime this summer or so of a train that started out of PI and then ran north from Squa Pan and thought that was odd, but it would fit with the Saturday outlaw/Monday crew north starts where the branch job canned and then performs their normal duties. Too bad that is just 1 day a week now, would be nice to see the PI branch cluster and Houlton getting more traffic- sure glad I dedicated several days to chasing the former BAR 79 on the Aroostook County branches in its final few years of service (which were also the final days of those branches seeing trains several days a week...) 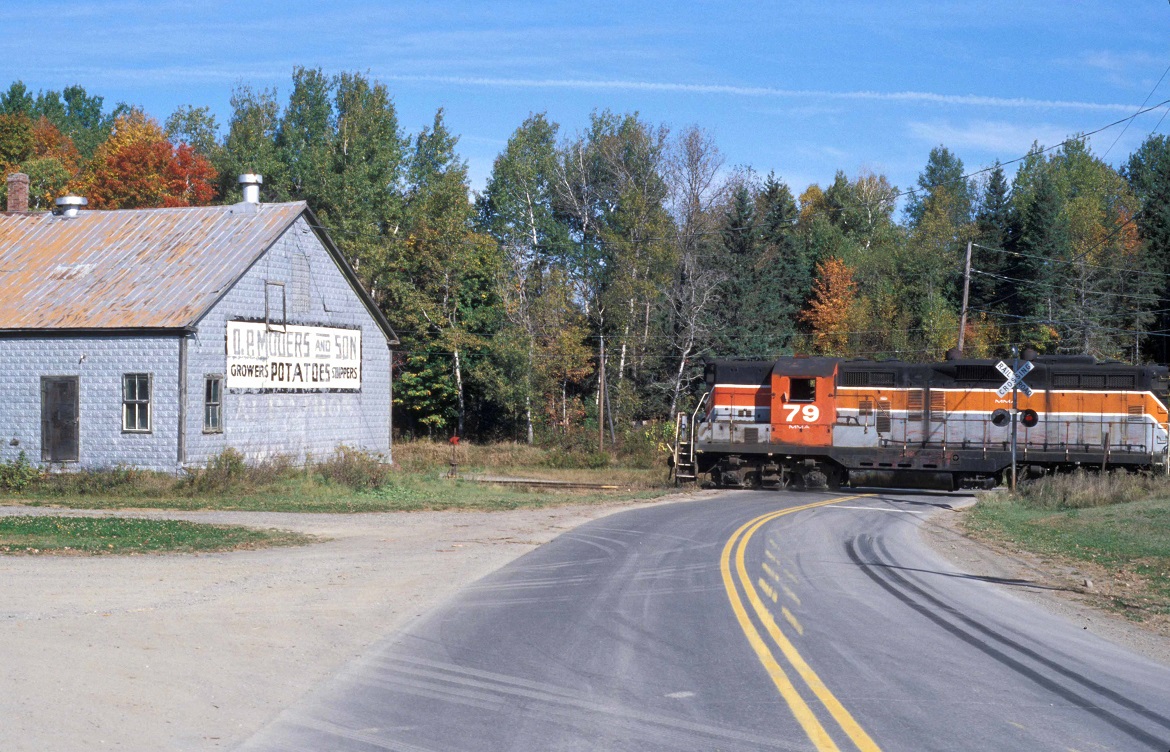 by Cosakita18
Wed Sep 23, 2020 6:08 pm
I'm surprised that the Presque Isle / Central Aroostook branch is only run once a week. It seems like Huber and McCain would be able to generate more traffic if they were switched out 2-3 times a week. I remember MNR kept a Presque-Isle based crew up until around 2013-ish

I thought they were running out of FK, not Mad, but I honestly don't know, may have misunderstood, maybe FK is where they are around daybreak? Don't have OD times, but I gathered it was early daylight, 7:00ish. Most of the chase is supposed to be in daylight from what I was told.

Times for 907/908 are indeed hit or miss lately. They were pretty reliably leaving Brownville 14-15:00 with an OD time 13:00. Meeting at Bancroft a few hours later, around 17-18:00. Reliable schedule for over a year. It all seems to have fallen apart with the start of stacks. I think the OD time is now 14:00, departure anywhere after that. Trains have been big both directions out of BJ. CP has had the tail end of 251 over in Siberia at the EMRY office trailer. Hard to get 907 together when your access to the yard is blocked with 10000' of train going the other way. I guess the double stacks are causing customs issues. The whole thing is a poorly rehearsed mess. I'm sure they'll return to something resembling a schedule when they get more accustomed to the finer points of a new interchange partner and new complications at the border.

Why? People in the county gotta eat too, they have an economy up there just like anywhere else utilizing the rich forest resources and strong farming landscape.

by MaineCentral252
Thu Sep 24, 2020 8:04 am
Hardly... Aside from some forest products (much of which is trucked anyway), there's really not much. The potato business is nothing what it used to be, and even that is all trucked. It would take serious investment for anything new to materialize and that takes will, which just isn't there. I'm highly involved in the agricultural scene and I don't see anything seriously changing up there rail-wise

by oibu
Thu Sep 24, 2020 8:10 am
I think the surprising part of any customer base is just the years of declining service under MMA, the sometimes less than ideal PAR connectivity, the fact that the main route west to Canada was shut down for a few years and has only really started to rebound over the last couple years, etc. I suspect, without knowing details, that the business would probably be better on those branches (and elsewhere) if reliable rail service hadn't been shaky to non-existent for most of the last 15 years or so.

Ksmitty, thanks again for your input. I assumed as much re: Squa Pan vs. Masardis but didn't want to be caught off guard if I went to Squa Pan and found it a ghost town because the railroad had set up a trailer for the local manager and crew changes behind the Fraser Levesque/Masardis mill or some such- they are all the same general area but when you get there on the ground the small distances between each become more significant.

I -suspect- the north end crew runs out of Madawaska. That's how it worked previously under MNR and even under MMA before that- turns out of Madawaska south via Ft Kent as well as the other way to VB/St Leonard, as well as a dedicated mill switch job at Madawaska. It is somewhere around 15-20 miles Madawaska-FT Kent with no local work between those two points, and about 20 miles FT Kent-Nixon again with no intermediate work, whereas Squa Pan-Nixon is around 25 miles with work to do at McDonald, Skerries, etc. so assuming the crew that comes south to Nixon does not do much switching at Madawaska (assume there is a mill job and/or the VB turn to do most of that?) the only work they do is whatever local work (log loading etc. if there is any at the given moment) at Ft. Kent, so the slightly longer distance probably balances well vs. the larger amount of local work Squa Pan-Nixon. Ft Kent-Nixon would just be 40 mile or so RT with little or no local work, so even at 10 mph and swapping trains at Nixon it would only be maybe 5 hrs to complete whereas the Squa Pan-Nixon crew from what I've seen in the past started in the AM and did not get back to Squa Pan til about dusk, spending nearly as much time switching as actually moving. But that's just my guess, if they have the Madwaska mill job also do the forwarding between FK and Madawaska or something, my theory or any past precedent goes out the window...

by CN9634
Thu Sep 24, 2020 9:12 am
MMA was a crook outfit, they did all they could to show a loss on the lines, they were expecting to dump the cost burden off on the state and re-lease the lines back but we all know how history went. They actually operated those lines at a profit the last year the had themes Also don’t forget there is a CN gateway in St Leonard, a good chunk of traffic routes that way and is seldom documented by rail fans but it had been in recent history as many as 5 days a week. Back in MMA times there was a big battle with Twin Rivers trying to get CN Trackage rights into the mill, it’s well documented.

by backroadrails
Thu Sep 24, 2020 3:21 pm
MNR has been doing quite a bit of track work north of Oakfield over the past two summers. I know something like 7 or 8 bridges are being upgraded with TIGER grant money, and I think they were installing around 25,000 ties to get the main back to 25 MPH. Also the Oakfield-Squa Pan job reports late at night, and I know a few times when I have chased 910, I have heard them cancelling their paper around 3:00 AM.

MaineCentral252 wrote:The potato business is nothing what it used to be, and even that is all trucked. It would take serious investment for anything new to materialize and that takes will, which just isn't there.

One of the things I learned from some research on a possible new venture was that the potato truckers often back haul loads into Maine at very competitive rates. For Aroostook in particular this makes for freight rates on inbound traffic that are exceptionally competitive.

For the railroads this means they get hit in both directions, prime high volume outbound commodities have truck service and any potential inbound loads are being moved at bargain basement rates. It also doesn't help that potato loads tend to have significant seasonal fluctuations.

I welcome comments, discussion or observations including those to the contrary.

by Cosakita18
Thu Sep 24, 2020 5:20 pm
I don't think potatoes move by rail anywhere anymore, that's not unique to Aroostook. However there must be some opportunity for more inbound feed and fertilizer. There's still plenty of agriculture up there.