Discussion related to the Lehigh Valley Railroad and predecessors for the period 1846-1976. Originally incorporated as the Delaware, Lehigh, Schuylkill and Susquehanna Railroad Company.

by jaystreetcrr
Fri Oct 21, 2011 12:03 am
Today in lower Manhattan I saw the LV tug Cornell heading south on the Hudson, pushing a small barge named Black Diamond, with a yellow schoolbus on the barge deck. What a sight! Where's the Cornell going?

by scottychaos
Fri Oct 21, 2011 6:30 am
If a photo of the tugboat R.H. Sayre exists, it has been sitting in a box in an attic for 100 years, and no one knows where it is..a photo of that tug is not known to modern LV fans/historians..

I have been working on a "LV marine" webpage for a few years, not on-line yet..
the LV had a (known) total of 25 steam powered tugs..One in Buffalo, three at North Fair Haven on Lake Ontario,
and 21 at New York harbor..(and there could be more) the names of the three at north Fair Haven are known:

Of the 21 steam tugs for New York, only the names of four are currently known:

Aurora
Black Diamond
Powerful
Perth Amboy
and now we can add a fifth! the R.H. Sayre! (based on the NY times article, we can conclude she was a NY tug.)

Oh, and one known Buffalo tug, the Kathrine T. Wilbur.

So, RH Sayre is a mystery!
not only has no one ever seen a photo, no one even knew there was a tug with that name!

until now..so thanks for adding a name to the list!

by Nova55
Mon Oct 24, 2011 9:34 am
There was also a steam tug "Cornell", I was quite astonished to see the photo! Another steamer was the "Auburn" The diesel tugs "Cornell & Lehigh" replaced the "Auburn" and the "Black Diamond" as the Harlem River tugs.
So, other steam tugs were also the:
NY:
Auburn (may have been early diesel)
Bernice
Cornell
Cheektowaga
Genesee
Ganoga
Geneva
Genesee
Lehigh
Luzerne
Mahanoy
Manchester
Mahanoy
Neshanic
Neshanic
Powerful
Packerton
Shamokin
Superior
Slatington
Westmoreland
Wyoming
I have the specs on alot of these as well.

The Powerful was reefed in Florida in 1992.

Only the Cornell and Bethlehem remain. This is what is left of the Capmoore in July. 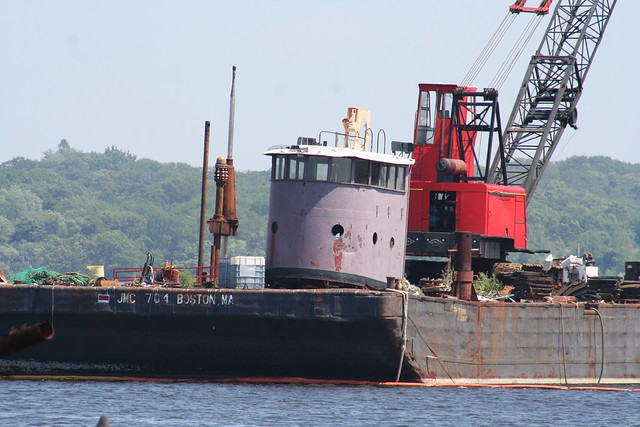 Jaystreet:
It was a job for the 25th anniversary of the magic school bus of all things. The barge was named the Black Diamond after the tug the Cornell replaced. Ironically it is a former RR barge, but of unknown RR.

by joshuahouse
Thu Nov 10, 2011 2:23 pm
There is a recent photo of the Cornell posted here. I didn't take it but I am the "photo_house" mentioned in the post. http://forum.fourthirdsphoto.com/showthread.php?t=69205
Check out my photography from around the Finger Lakes. [url] http://joshua-house.artistwebsites.com/ ... +state/all[url/]