Rep. Bobby Rush (D-Ill.) is threatening to stop Metra “in its tracks” unless more African-Americans firms get work from a massive railroad construction project in his congressional district called the “Englewood Flyover.”...Metra spokesman Michael Gillis declined to comment on the accuracy of Rush’s tip because, he said, the bidding process is not complete.

While this could be nothing more than political posturing it's probably something to keep an eye on.

Quoting from the Sun TImes:
"“The potential construction jobs and contracts from the Flyover arrive right on time” for residents of the impoverished Englewood community."

Um, no, right on time would've been thirty years ago when the neighborhood started it's severe decline. Traffic through "downtown" at 63rd/Halsted is so sparse the one-time bypass has been blocked off and Sears is long gone. What are 1500 jobs for six months going to do? Enrich a few tavern owners and that's about it. Besides, Metra has one of their biggest repair facilities in the city about 20 blocks north. They could easily pull that up and put it in the 'burbs, but they employ a lot of people in that area already.

More: "Gillis told me the transit agency did all it could to encourage minority bidders, working with Rush for two years to find companies that could be part of the project."

Hmm, two years, looks like Metra was not only proactive, but they gave two years for people to make up there minds.

The real kicker? The Rock provides vital service carrying people from other stations in under-employed neighborhoods such as Gresham. If the bridge were built regardless of Rep. Rush's feelings, it would provide better service to those neighborhoods and the under-employed folks there. Give the above and Rep Rush's almost 20 years in office, it sounds like Rep. Rush is more interested in his elected-job longevity than he is in really creating solutions that put people to work. I'm really not a fan of career politicians.

by justalurker66
Mon May 07, 2012 12:44 am
The project may get re-bid ... but the other politicans are NOT in agreement with Rush that the Englewood project must be stopped. Rep Rush was incorrect to promise (or even infer) the 1500 jobs would go to his community. And there is no guarantee that "minority controlled" businesses will hire any more Englewood residents. The whole idea seems a little racist - assuming a "minority controlled" business will hire locally and others will not? And regardless of who controls the businesses winning the bids, does Rep Rush's neighborhood have appropriate skilled labor to contribute to the project?

I look forward to the bid announcements and the project going forward ... as scheduled. Rush can use his complaints in his reelection campaign and electors will continue to get the leaders they deserve by voting for them.

by doepack
Mon May 07, 2012 5:39 pm
The age-old problem of freight congestion in Chicago continues. And more free speech for the dumb following the article, as usual...
--Dorian--

"Create is largely about bringing old-fashioned low-speed rail up to modern standards."

What would you rather have, 79mph track to 110mph or 15mph track to 30? I'd take the second. Especially in this case. How on earth did PRR, NYC, and CRI&P deal with this bottleneck 40 years ago?
Dig the new rr.net Instagram account: @railroad_dot_net

by doepack
Tue May 08, 2012 5:17 pm
At times, I'm sure Chicago's legacy railroads had their share of congestion problems as well, but the main thing working in their favor was that they had a lot more infrastructure to handle it, which provided more options. Sure, some abandonments made sense, and there were certainly a few areas that were overbuilt, but the CREATE program might not need to be as extensive and far-reaching if perhaps a handful of rail lines in the Chicago area weren't abandoned, especially those in strategic locations near yards, or at certain interchange locations with other carriers...
--Dorian--

by CHTT1
Tue May 08, 2012 10:51 pm
Chicago's always been congested. In the past things were probably even worse than they are today. A freight car taking two or three days to get through Chicago has always been the norm. Nowadays that's not acceptable. In the past, it was business as usual.

by Tadman
Wed May 09, 2012 4:09 pm
Good point. We forget it used to make sense from an economic standpoint to load half a train in this steamer, crewed by 30 men, and float it across the lake and thru the ice... 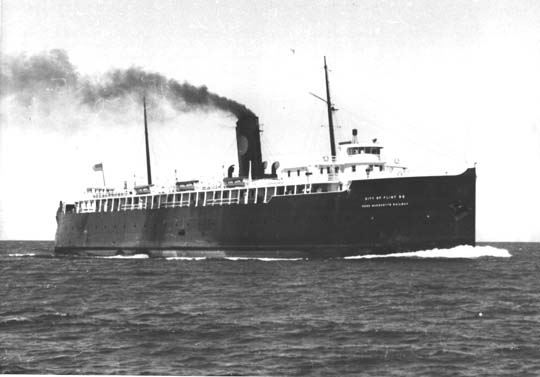 IRM's Nebraska Zephyr is making two round trips to Quincy (via Galesburg) next weekend. They will be operating out of Union Station and of course be heading west via the BNSF racetrack. Something to watch out for if you're out and about on the 22nd or 23rd. Trip info is here: http://www.irm.org/events/zephyrexcursion.html. The train will be operating as an Amtrak extra, and thus will be permitted to operate up to Amtrak speeds (79 mph).

by doepack
Sun Sep 23, 2012 6:32 pm
Saw the Nebraska Zephyr excursion this morning on its westbound trip through the Naperville Metra station, and it looked great! While I managed to get a small camera phone pic as it went through, I was more intrigued by the number of folks gathered there to see it, on both sides of depot; from hardcore railfans to the many others who brought families along to see this special run. And I sincerely hope that some of the children there today will grow up to be future railfans. But really, I'd just like to take time out here to thank the wonderful volunteers at IRM (and that means you, David) for making this event possible, and for taking the time and effort to restore this historic train to its original operating condition. I've been a railfan for much of my life, and have been privileged to see a lot of neat things, but this is a first for me, and hopefully, it won't be the last.

by lstone19
Sun Sep 23, 2012 6:50 pm
I rode Saturday's trip the whole way and it was great despite some delays. There were some concerns with charcoal embers from the diner that caused us an hour delay at West Quincy and then another 45 minutes at Galesburg on the return (the delay extended by waiting for 3 to have the station first). But then the final Galesburg to Chicago run was pure magic as the engine crew was clearly out to prove the engine still could do it (plus save as many Metra connections as possible).

Out of Galesburg at 6:10 1:50 late and carded for 2:40 running time, we pretty much kept it at track speed right to the bumping post and knocked off the 162 miles in a blistering 2:24 (67+ mph average) and save the connections to the 8:40 BNSF and my MD-W trains. Using the employee TT speeds (which were nicely provided to us in a trip souvenir booklet), I make the theoretical best possible time (instant acceleration and braking and zero train length to keep speed restrictions to their minimum distance) 2:17. By comparison, 3 and 5 are carded at 2:38 with three and two intermediate station stops respectively.

I agree with Dorian about the photographers. From a line on the Roosevelt Road bridge all the way to Quincy, almost every station and crossing had at least one photographer waiting for us (the NZ GPS tracker web page is great for that!).
Larry
Reno, NV (yes, I've moved)
ex-N&W Sandusky, Ohio

by Tadman
Sun Sep 23, 2012 9:14 pm
In a moment of sheer stupidity, I thought it was next weekend and failed to buy tickets or ride... I'm a bit P-O'ed at myself right now. Sounds like a great trip.
Dig the new rr.net Instagram account: @railroad_dot_net

by Gilbert B Norman
Mon Sep 24, 2012 7:26 am
As I noted over at the Amtrak Forum, the Clarendon Hills "soft core" railfan community, including me, turned out for the Saturday WB passage. No railfan apparel, and nothing more than smartphones or pocket cameras were in sight (no radio scanners either). The "hard core" likely were staked out at the curves along the Chicago Sub (why it ever became known as the Racetrack, I know not; it's 70mph max) such as Lisle and maybe even the slight curve to the West of my home which is @ 18.70.

But what I find astounding in this day and age is how much "non-revenue" space trains of that era offered - only two full Coaches. Considering that this Zephyr set started life as a Twin Zephyr, somehow if Amtrak ever were to inaugurate a local CHI-MSP train, it would probably be three Coaches and a Cafe/Biz Class. Only diff is the capacity would be double.

Otherwise, I did ride the NZ circa 1967 Chi-Burlington; by then, the Zephyr consist were the rear cars of a combination of the NZ, the KC Zephyr, and a Chi-Denver predominately Mail & Express named The Coloradan, which at Lincoln picked up the consist of the Cal Zephyr that by there had caught up with it. The Diner was gone in favor of "one arm bandit cuisine", the the Parlor Obs was still very much in service - and worth every penny of the premium to ride in such.

by byte
Mon Sep 24, 2012 6:07 pm
Based on estimates from various sources, the number of small brushfires *possibly* set by the Zephyr's charcoal stove and/or diesel smokestacks on Saturday numbered from 5-9. If these were indeed set by the train, it was obviously a case of conditions being just right as no fires were reported on the return trip from West Quincy to Chicago. Nevertheless, spark arrestors were added to the smokestacks on Saturday night to prevent any issues the next morning.

The only issue encountered during Sunday's trip was a failure of one of the generators in the power car, Venus. This was mitigated by simply switching off the air conditioning in the trainset whenever the dishwasher in the diner needed to be run, and I don't believe the interior temperature was adversely affected.
That old car might be worth money!

by lstone19
Mon Sep 24, 2012 7:09 pm
I forgot to mention in my earlier post that Amtrak had the train on the departure monitor under the traditional Nebraska Zephyr train number - 11!
Larry
Reno, NV (yes, I've moved)
ex-N&W Sandusky, Ohio