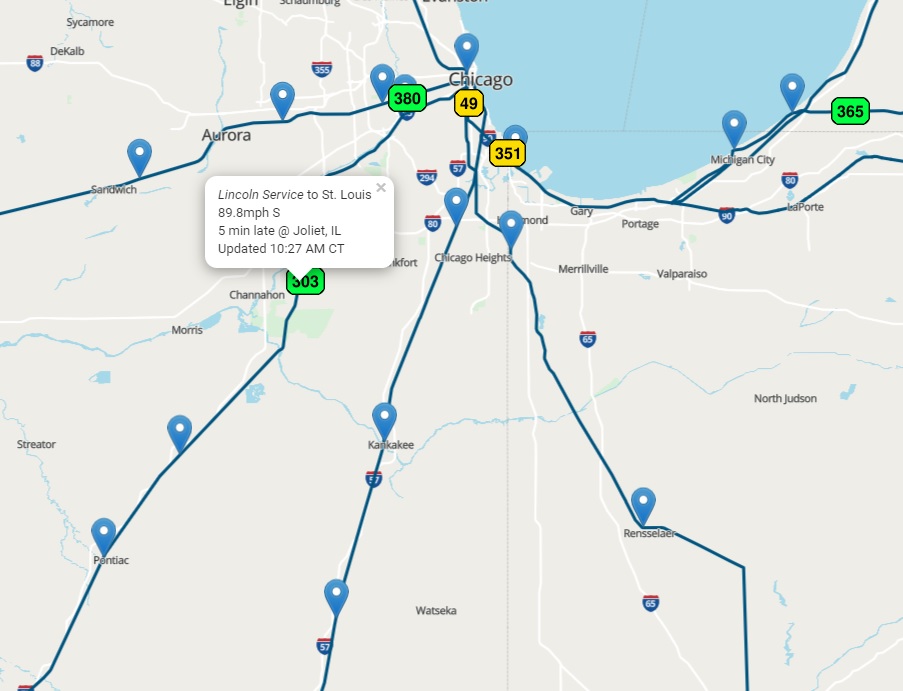 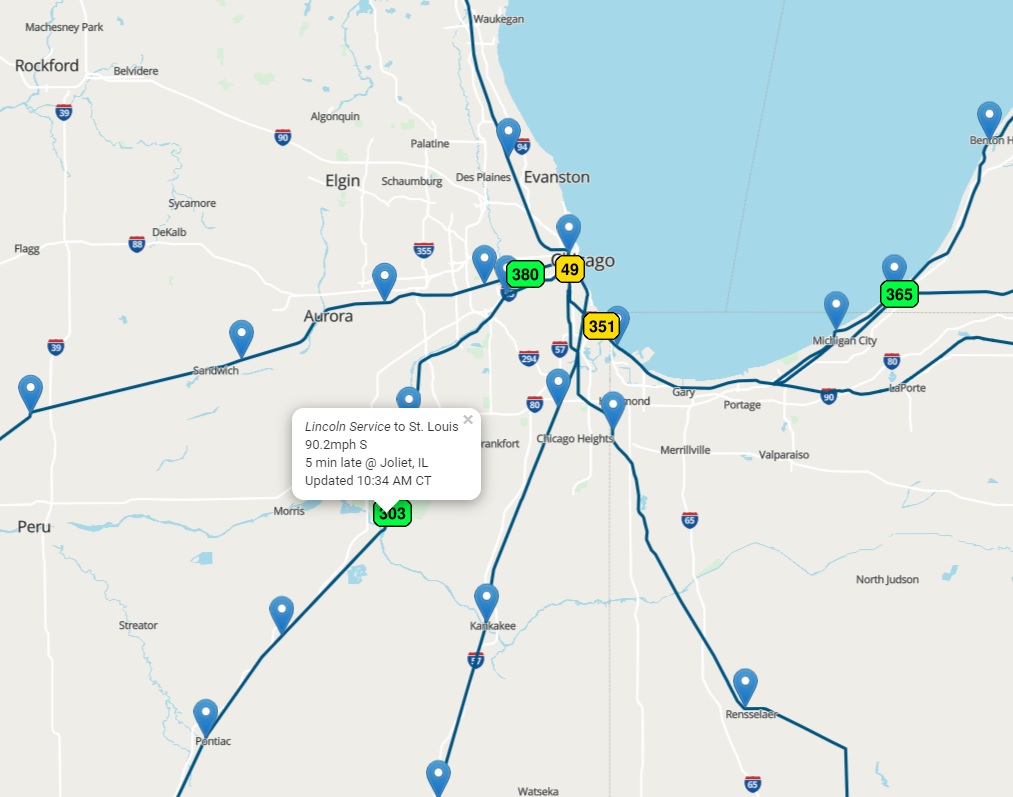 by StLouSteve
Thu Jul 08, 2021 8:08 am
Yesterday's southbound Eagle from Chicago was running about half hour early into St Louis when a mile from the station it was blocked by a long freight needing refueling. Arrival was actually a half hour late.

So despite higher running speeds, if we don't get the dispatchers to give Amtrak priority, the investment will have been for naught.

by quincunx
Mon Dec 13, 2021 11:59 am
Some more time coming off the schedule. Judging from my last rides STL-SPI, they could have shaved a few more mins.

These schedules reflect a maximum authorized speed of 90 mph for Trains 300 - 307 and Trains 21 & 22. Chicago to St. Louis corridor travel times are reduced by approximately 15 minutes, end-to-end.

StlToday - Trains on Amtrak’s St. Louis-Chicago route now running at up to 90 mph

Maximum speeds up to 90 mph is still not the promised 110 mph.

Here's a Facebook posted report from Ill DOT that they are looking at revenue service for the Venture cars during First Quarter '22.

For me, when riding into town on the BNSF (just occasional for Chicago Symphony), seeing those cars sitting at Lumber Street reminds me of seeing those NJTransit MU's sitting there at Manhattan Transfer waiting for the reworked DL&W electrification to be completed during '77.

by StLouSteve
Fri Dec 17, 2021 7:20 am
There are reports that some of the new cars are showing up mixed in on the state sponsored Lincoln Service trains now.

by quincunx
Thu Jan 06, 2022 10:53 pm
A progress video by Hanson Engineering of the track consolidation of the UP tracks with the NS tracks on 10th Street in Springfield. The 3rd St station is such a good location in the middle of things. Shame to lose it.

I know this post is quite old, but I can't let it go. Very little of the internet is carried via satellite, even most mobile internet is via terrestrial towers. Your experiment to bring up a bunch of streaming basically has nothing whatsoever to do with I-ETMS or internet coverage along the line. The satellite component of I-ETMS seems to just be the GPS segment, which is positional and receive only. The ground to train segment I believe uses a new 220MHz radio network installed by the railroads in specific locations to meet their coverage needs. The issues with I-ETMS from what I have read, are due to the inherently imprecise nature of satellite positioning. When a train's receiver can't calculate just from GPS which track the train is on, or there's a quick position jump and the train suddenly thinks its going 100mph in a 45, the system has to bring the train to a stop. As speeds go up, the safety tolerances have to be tighter, the system HAS to be quicker to assume an issue and bring the train to a stop. I think there are some issues with the 220MHz network too, but that's due to poor planning on the part of the railroads, and still has nothing whatsoever to do with internet coverage on the route.

Now, to answer the original post about internet. That is due to the lack of cell service along the track. Unless the railroads needed the cell service (some might), carriers largely have no real incentive to make their service particularly accessible along the railroad. The cell towers aren't just big omnidirectional antennas, these days they use some pretty advanced "steering" of the radio signal, and again, unless they had a reason to, they aren't going to steer them to cover the railroad.

by David Benton
Sat Jan 08, 2022 5:17 am
Always found it rather strange the railroads didn't go with laying a fibre optic cable along their right of ways , and sell the excess capacity to data users. Perhaps a speed of installation when they finally had to pull finger on installing PTC , though there were holdups obtaining radio frequencies too.
Moderator worldwide railfan , Rail travel & trip reports
The only train trips I regret are the ones I didn't take.