by TurningOfTheWheel
Thu Apr 29, 2021 8:48 am
So as I worried a few months ago, 110 did in fact turn out to be an issue with I-ETMS. But the lack of at least 90 mph speeds at this point is frankly inexcusable.*

*So is the lack of 110, but the fact that we as IL taxpayers have spent nearly $2 billion for no service benefit is insane.

by eolesen
Thu Apr 29, 2021 9:28 am
As an Illinois taxpayer, there are far more egregious examples of $$$ spent here with no apparent benefit. Teacher pensions come to mind...

by Arborwayfan
Thu Apr 29, 2021 10:03 am
Well, if you want to go back in time and raise the teachers' salaries enough to retain them without the prospect of a pension, go ahead. Those people took those jobs and kept those jobs knowing that a certain type of pension linked to their salary in a certain way was part of their compensation.

If someone's employer had contributed to a 401K, and then when the person retired the employer took back the money, that would theft; not providing a pension as agreed at time of hire and in subsequent contracts would be pretty much the same thing.
Last edited by Arborwayfan on Fri Apr 30, 2021 8:46 am, edited 2 times in total.

by TurningOfTheWheel
Thu Apr 29, 2021 10:14 am
I'd rather spend money fairly compensating teachers than rebuilding a Class I ROW for the hell of it.

eolesen wrote: ↑Thu Apr 29, 2021 9:28 am As an Illinois taxpayer, there are far more egregious examples of $$$ spent here with no apparent benefit. Teacher pensions come to mind...

Sate-supported routes require trading money. My state, Virginia, has spent zillions on freight lines and yards for CSX and NS. I don't know about Illinois, but it supports four lines and benefits from three others, leading most states in the list below. Amtrak is also planning to spend big on Chicago Union Station. 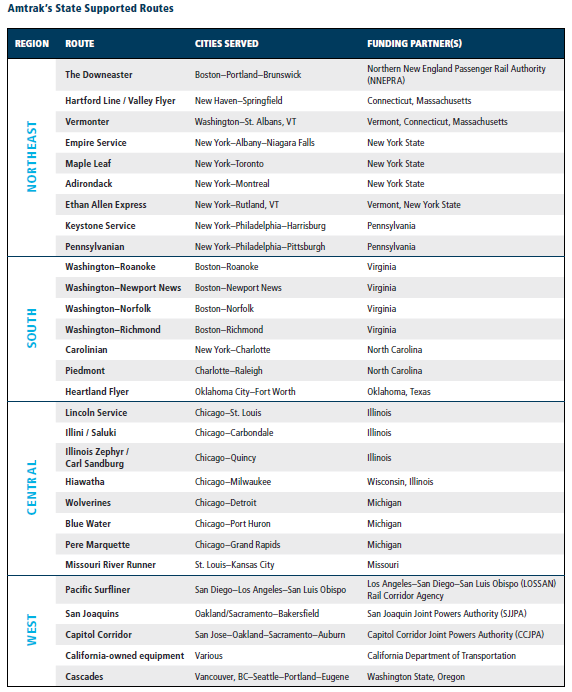 eolesen wrote:As an Illinois taxpayer, there are far more egregious examples of $$$ spent here with no apparent benefit. Teacher pensions come to mind...

While I appreciate concerns about the state of education and children in Chicago this somment seems gratuitous and potentially beneath the dignity of this forum. I'm not a moderator nor did I stay at a Holiday Inn Express .... However, I do think the situation with this project is fundamentally unacceptable. Upgrades to hardware and software should be possible that will make the original goals achievable.

One thing that caught my attention was the mention of "seconds" with regards to data transmission. That would appear to be a very clear problem with bandwidth (or lack thereof) at data points along the line. To me this sounds like an issue that would be dealt with using fiber optics to the trackside infrastructure and imported computing power for the computer servers.

by StLouSteve
Sat May 08, 2021 7:43 am
Wifi service onboard along the route using cell carriers isn't very robust and drops out entirely for a stretch around Carlinville so I can imagine there might be transmission issues with the PTC.

by njtmnrrbuff
Sat May 08, 2021 11:15 am
The future Chicago-Moline service is a great idea. It's certainly a start for getting corridor rail service as close to the Iowa/Illinois border as possible. While it might not cross into Iowa in the beginning of operation, it's great to see that it will stop very close to Davenport. Not only would this route benefit people taking the train all the way to Moline. Stations like Plano, Mendota, and Princeton will gain some additional corridor trains and those towns are good daytrip destinations from Chicagoland. It's presently impossible to make a daytrip from Chicago to Plano, Mendota, and Princeton, given the fact that the Carl Sandburg isn't running yet. However, that will change in one of the next few months. Unfortunately the drawback with the Carl Sandburg is that it departs Chicago a bit early. Having the trains running to Moline will hopefully enable daytrippers heading to Plano, Mendota, and Princeton to sleep a little later.

Having lived in the Chicago area for over half of my life, I've never heard anyone say "hey, let's go to Moline!"....

Galena, maybe. Not the Quad...

by eolesen
Tue May 11, 2021 3:58 pm
No, but when you talk about any form of new spending in Illinois, you can't ignore the $300B in future "P" liability the state currently has, and legally that has to be funded ahead of discretionary programs like rail...

by Gilbert B Norman
Wed May 19, 2021 5:08 pm
Local NBC News has just reported that all Illinois sponsored train frequencies will be restored not later than July 19.