by SST
Thu Dec 31, 2020 11:37 pm
After skiing, I stopped at Pizza Express on Broadway and then parked over at Old Broadway to hopefully catch some action. I had good timing yesterday.

As I pulled into Old Broadway and started eating my lunch, a single unit CSX train was parked doing a crew change.
Lunch is served:

After a few minutes I could see that the signals at Harlem Rd had turned green and slowly CSX started to move. He only started gaining speed until the signal. I didn't think much of his slow motion as it was only 1 locomotive. The consist was a real mix of everything and in no obvious order. Tank cars, box cars, covered hoppers with lumber cars etc etc. I thought with just one locomotive up front, there might be one or two in the middle. But finally , the end of the train passes by and it is one locomotive on the rear. No FRED.

Just a few minutes later, a single BNSF eastbound unit pulls in and stops for a crew change. I didn't pay attention to what he had in tow. Just cool to see one of these units.

While he was parked, a westbound CSX train comes to a stop for a crew change. Single unit again. The Harlem Rd signal turns green and BNSF starts to move. This is when it grabbed my attention as he moved along. He's pulling a stack of welded rails. I counted about 22 flatcars. I thought perhaps there might be a split in the rails but they were all one piece from beginning to end. I estimate that the length of the rails were 3/4 of mile based on how much of the train had passed by me as comparted to the Harlem Rd signal being tripped from green to red.

This picture shows the rails crossing from one flatcar to another. You might also see where each section of rail was welded forming one piece.

End of the rails:

After he rolls out of view, the westbound CSX train begins to move and he also had one locomotive on the rear end of the train. Is this a new "thing?" I don't think I've ever seen this many trains with one loco up front and one on the back end. Whatever works I guess.

A Sperry unit was also parked in the yard. #131.
Through the binoculars:

Despite the rainy day it had become, it was a good day to watch.

by dj_paige
Fri Jan 01, 2021 6:21 am
Very interesting. I wish I had been there, and thanks for the description and photos. (So many times people provide the photos and leave out the description).

Of course, I am dying to know, how was the pizza?
Paige
"If you get the chance to sit it out or dance, I hope you dance" -- Lee Ann Womack
My Flickr Photos

by SST
Fri Jan 01, 2021 9:28 am
Its funny you ask me that. I actually edited out a comment I made to help shorten the post. But since you ask.....In my opinion, Pizza Express serves the best pizza and I could have easily chowed a whole pizza on my own. While sitting on Old Broadway, I actually considered going back for another slice. It's location is superior!

It is not a sit-in restaurant but you can watch activities at Frontier while they prepare your order.

by dj_paige
Fri Jan 01, 2021 10:29 am
Thanks again. In my opinion, an important part of railfanning is knowing the nearby places to keep yourself well fed and well hydrated during hours of railfanning. So you have again provided useful information (to me, anyway).
Paige
"If you get the chance to sit it out or dance, I hope you dance" -- Lee Ann Womack
My Flickr Photos

SST wrote: ↑Thu Dec 31, 2020 11:37 pm After he rolls out of view, the westbound CSX train begins to move and he also had one locomotive on the rear end of the train. Is this a new "thing?" I don't think I've ever seen this many trains with one loco up front and one on the back end. Whatever works I guess.

It's new within the last year or two, the power on the end (and in many cases, mid-train) is used to better optimize the handling of trains. I believe the throttles of the distributed power (known as "DPU") are connected to the lead engine.

It's weird, but I'm slowly getting used to it. BTW, yes Pizza Express has had good pizza and food for a long time. I need to get out there soon!

by ctclark1
Sat Jan 02, 2021 4:44 pm
Part of the EHH "PSR" initiative and variants that most railroads are using now. Longer trains means fewer trains, and in order to improve handling for both acceleration (reduced coupler strain, better "hill-topping" control) and braking (more control points to expedite the distribution of braking commands, including dumping for emergencies). The DPUs are radio controlled.

by clearblock
Tue Jan 05, 2021 11:51 am
The OP's comment was "I thought with just one locomotive up front, there might be one or two in the middle. But finally , the end of the train passes by and it is one locomotive on the rear. No FRED."

So the comment was not wondering about distributed power but stating the fact that the DPU was on the end vs normal mid-train practice.

by SST
Fri Feb 26, 2021 9:35 am
Sitting at Frontier during a snow fall. I was surprised to see a NS locomotive there. A CP is in the background. There was also a Santa Fe War Bonnet there as well but in a bad position. 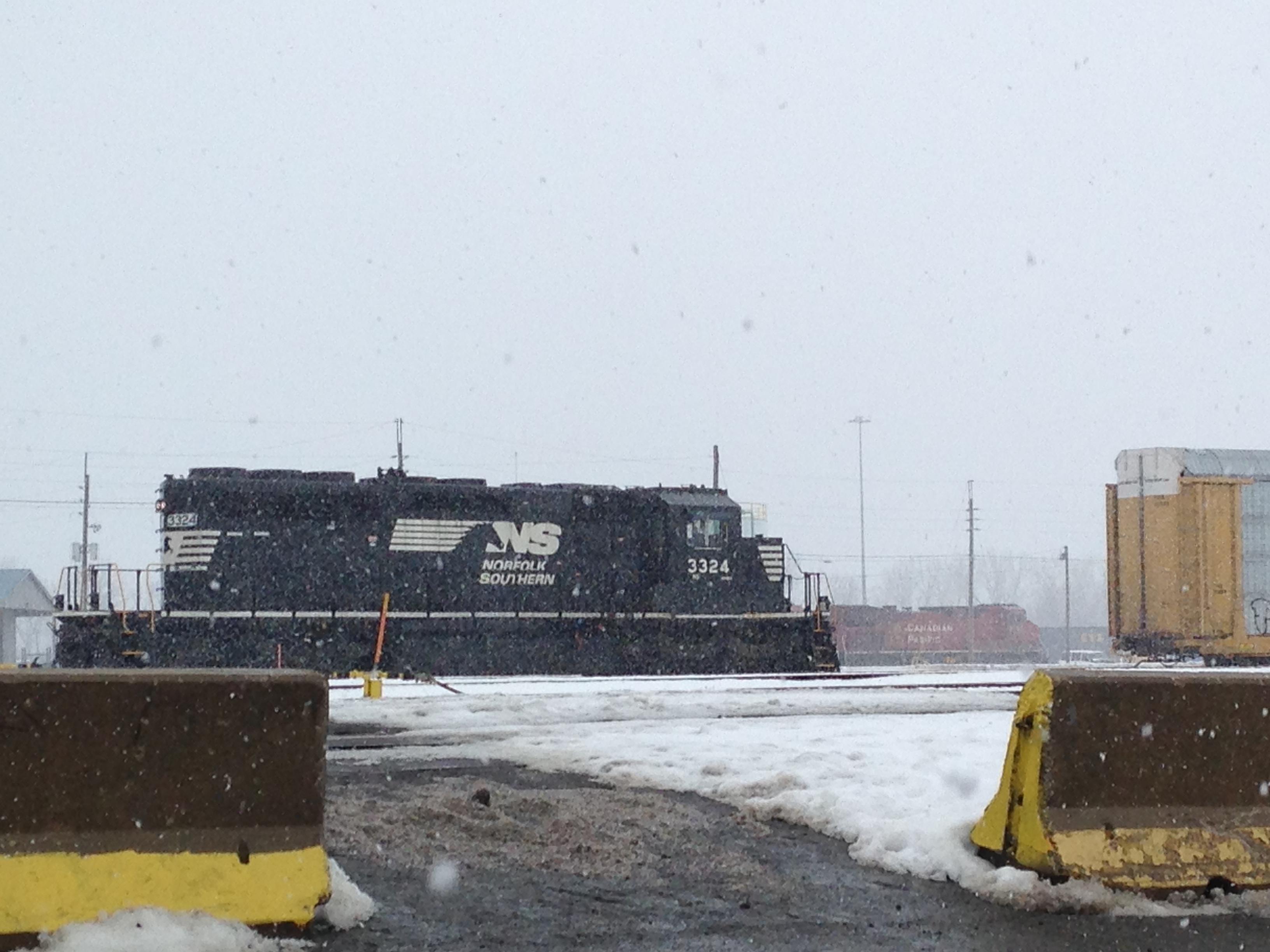 no pizza today. The person in front of me got the last slice.

by SST
Tue Mar 02, 2021 1:17 pm
I stopped by Frontier yesterday just for something to do. A crew was waiting for a train to arrive and shortly two BNSF units pulled in [eastbound]. While sitting in my car waiting for them to get rolling, I see something out of the corner of my eye. I though the BNSF units were finally rolling so I started to watch. Hmmmm, he's not moving....no that's not right.......

At first I thought he was backing up to compress the railcars to ease his move forward. But that's not what he was doing. He was actually rocking the loco's [like trying to get out of a ditch]....back and forth trying to get traction to move forward. After several attempts he starts moving very slowly forward with a little acceleration but then slows down to almost a stop. The starts to accelerate again, slows down and then finally a steady acceleration and keeps going. Puffs of smoke kept coming out of the second engine.

This was a full tank car consist with only 1 BNSF boxcar at the end. No locomotives in the middle or the end. I think he could have used the extra power. I estimate his length at about 1.25 miles long.

Rock and roll at its finest!