For topics on Class I and II passenger and freight operations more general in nature and not specifically related to a specific railroad with its own forum.

I hope the nation's 4 major rail operators take advantage of this opportunity that is being handed to them. I hope Warren Buffett sees the strategic advantage that Burlington Northern can seize. Union Pacific and CP and Canadian National too.

Buffett should take a shot at acquiring CSX (or NS) and put together a true American transcontinental system.

Since the PC bankruptcy and the creation of Conrail, the railroad industry has never been in such a superior position.

Now, will the Managers have the "will" to move it together?

Sure, coal is amongst "endangered species" but if the roads recognize that no trucking concern can match the rates a railroad can offer, and if the roads do not "bow unto the robes of St. Ewing" too deeply, their service disadvantage should be offset by the rates.

I know that many hold the merger movement has "reached the bumper post", but with so many other industries working as duopolies i.e. ATT Comcast in communications. Jeff and Wally World in retailing, Fedex and UPS in "last mile" shipping, I think it's inevitable.

Not in my remaining lifetime, but within that of many here.

by ExCon90
Fri Oct 15, 2021 9:27 pm
Certain industry groups are still pushing for federal re-regulation. If they succeed in holding rates down or in making it as difficult to establish, raise, lower, or cancel rates as it was pre-Staggers, the entrepreneurial sclerosis that characterized that period will probably return. I always felt that the ICC's attitude from 1887 on was "find out what the railroads are planning to do and stop them." Certainly there were railroad managers pre-Staggers who appeared to regard themselves more as curators of what they inherited than as innovators -- since for any new idea there was a multitude of prior ICC decisions forbidding it -- but I think they're mostly gone now. I just hope they're not being replaced by some who think that anything less than a trainload is not worth bothering with.

by Pensyfan19
Fri Oct 15, 2021 10:49 pm
Tell BNSF and UP to reactivate their stored MACS and Dash 9s. As well as NS to reactivate their SD70s and other engines stored in VA. And any other railroad who has stored engines which I did not mention here.
"Look down, step over, and watch the gap!" - Dr. John Clarke, The Gap Rap (2010)

ExCon90 wrote: ↑Fri Oct 15, 2021 9:27 pm Certain industry groups are still pushing for federal re-regulation. If they succeed in holding rates down or in making it as difficult to establish, raise, lower, or cancel rates as it was pre-Staggers, the entrepreneurial sclerosis that characterized that period will probably return.

Mr. Ex-Con, any thoughts of "re-reg" are of course "ominous", but I'm hopeful, such will not return.

First, like it or not, Congress is returning to Republican control come Jan '23. Further, there will also be a Republican @ 1600 come Jan '25. Secondly, any shipper, mostly within the agricultural community that has never enjoyed a choice of roads - ever, are largely Republican anyway.

Industrial shippers largely have a choice of roads - and modes. That the FRA through the '90's merger movement ensured, to a great extent, there would be balanced competition with reciprocal switching. Case in point, think of that Toyota facility in Bexar County, TX deep into (SP) UP rails, yet (SLSF) BNSF has access to make rates and offers line hauls.

The much greater issue is that immediately raised by by Mr. NHV - staffing. This current environment has empowered workers to a level not seen since the '50 -'60's "postwar era" where "if you don't like it, leave. Like it or not, young railfans, railroads are a pretty cruddy place to work - Agreement or otherwise.

Finally, while some in the tech world may dream of a "1:1 Lionel", that's a long way off; probably just as far as what an AA Attendant once said to me at a Block Party; "if Bob Crandall had his way, we'd all be flying around in drones".

by Shortline614
Sat Oct 16, 2021 8:55 am
I think the greatest opportunity for the railroad industry right now is intermodal and more specifically e-commerce.

Throughout the 2010s the general mantra was "Coal is dying. Intermodal is the future." This was more rhetoric than reality as intermodal volumes were mostly stagnant throughout the decade. All of the long-haul business had been snatched up and railroads couldn't really grow intermodal traffic without breaking into the unattractive short-haul business. Then came COVID-19 and the permanent rise of e-commerce which was pushed intermodal volumes to their highest point in history.

Without COVID-19, the rise of e-commerce and intermodal volumes would have played out over a much longer period of time. Probably a decade or more. Too little to be noticeable. We basically got a decade's worth of growth in half a year, and as expected railroads are struggling to keep up. There simply isn't enough capacity in intermodal terminals. In the short-term railroads will have to turn away a lot of this business in order to keep things manageable, but in the long-term expect a lot of investment in intermodal terminals in order to handle it. If railroads play their cards right I would not be surprised if intermodal volumes double in the next decade or two.
Barbecuing in Chessie's backyard. Host of "Shortline's Rail News & Comment."

But God did the railroads here a favor; making the only navigable chain essentially N-S. The European roads not so fortunate with major chains such as the Donau and Elbe flowing in large part E-W. That is why I hold rail freight traffic over there is a sideshow.

by kitchin
Sat Oct 16, 2021 2:19 pm
The article is partly a marketing push for container traffic on all or part of the Intracoastal Waterway Texas - Boston. Not sure how much of that will happen, but the locks do need major upkeep either way, and soon.

DOT issues grants for container on barge projects, like the Port of Virginia looking to carry more containers on the James River, instead of just rocks from Richmond.

This map is more general, but I noticed the "marine highways" are numbered like nearby interstate highways. Of course in the old days that would have been a rail map underneath, and maybe it still should be. 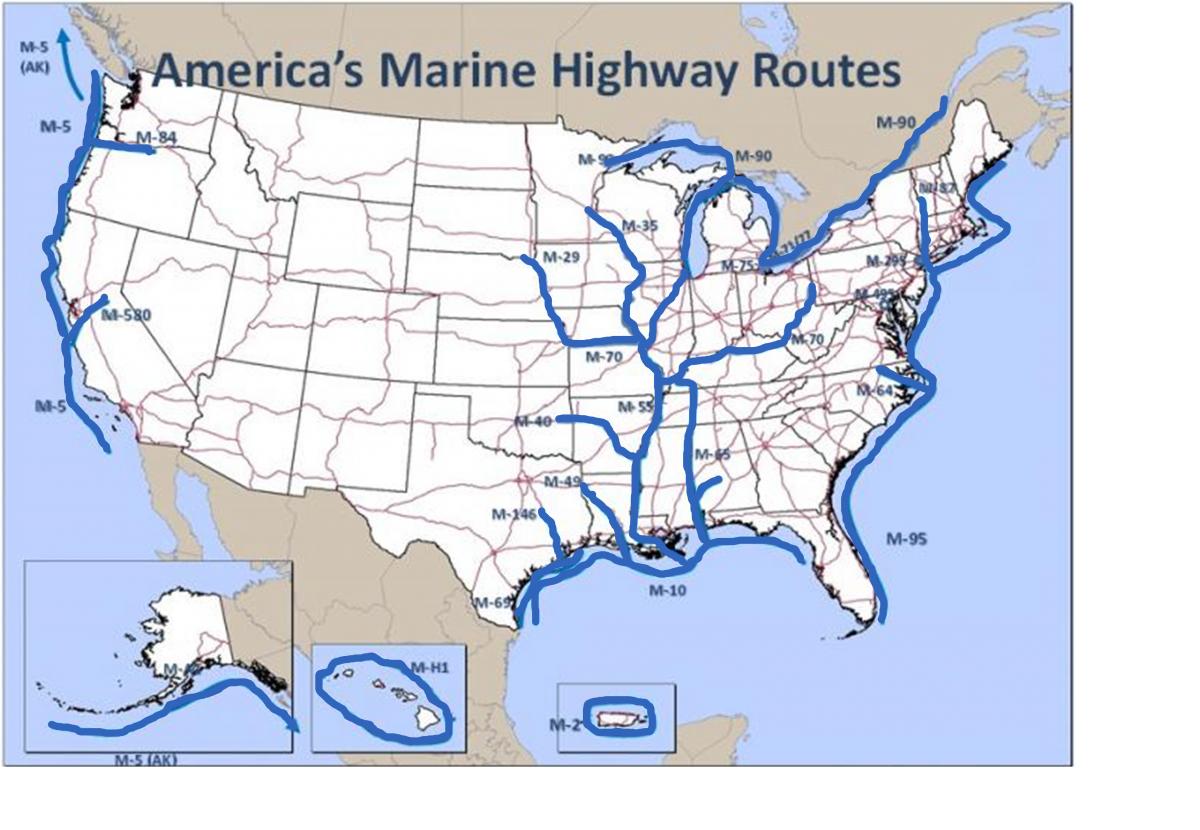 
The chief executives at CSX Corp. and Union Pacific Corp. say a lack of truck drivers, equipment and warehouse workers are causing congestion in their yards, forcing the railroad operators to turn down some business during a time of high demand for shipping companies.

The railroads are also facing issues within their own operations, from damaged bridges to difficulty hiring conductors, that they say are hampering them from transporting more goods.

“You dream about days like this when the phone is ringing off the hook, and customers saying, ‘Pick up my stuff and move it for me,’” CSX CEO Jim Foote said in an interview Wednesday. “This is the time we want to shine.”

Finally, regarding Mr. Freightguy's rrference to PSR, I realize there isn't an Agreement employee, craft notwithstanding, who has kind thoughts regarding such. I think that all roads that embraced "The Gospel According to Saint Elwood" are starting to see a need for "rethink". Such was a plan to reduce utility and capacity on the strength the industry was dying and that the only traffic left would be low value bulk commodities where shippers accept the "you get 'em when we decide you get 'em". This logistical breakdown starting at the maritime ports and the shortage of truck drivers is showing railroads will have their share of high value traffic until the crisis abates. If the roads wish to share in this traffic post-crisis, and possibly even command it, some elements of PSR will need a "rethink".

Why sit in a yard all day if you can make more money driving for DoorDash and having more control over your own hours?...

by Pensyfan19
Tue Nov 09, 2021 10:15 am
I once replied to a post discussing the supply backlog and how this is a chance for railroads to shine by reactivating stored locomotives (such as the BNSF SD70MACs). I was given the response of not enough workers to operate them. Meanwhile, the New York Times (and seemingly the rest of the nation) continues to overlook freight being transported by rail in favor of puny 18 wheelers.


...Truck drivers have been in short supply for years, but a wave of retirements combined with those simply quitting for less stressful jobs is exacerbating the supply chain crisis in the United States, leading to empty store shelves, panicked holiday shoppers and congestion at ports. Warehouses around the country are overflowing with products, and delivery times have stretched to months from days or weeks for many goods.

A report released last month by the American Trucking Associations estimated that the industry is short 80,000 drivers, a record number, and one the association said could double by 2030 as more retire.

Supply-chain problems stem from a number of factors, including an extraordinary surge in demand for goods and factory shutdowns abroad. But the situation has been compounded by a shortage of truckers and deteriorating conditions across the transportation sector, which have made it even harder for consumers to get the things they want when they want them.

by NHV 669
Tue Nov 09, 2021 11:45 am
Last I checked, not many stores have sidings next to them, and you're lucky if the local DC has one either. You still need trucks to get most goods to their end destination, and/or between transload points if one exists anyhow. Trucks are almost always the best answer in a short haul scenario.

What does pulling excess locomotives out of storage have to do with solving a manpower problem that extends to both industries?
Casey
Avatar: NHV 669 at the south end of the "Pompy" in White River Jct., VT on 4/29/1993. Photo by Richard Roberg.