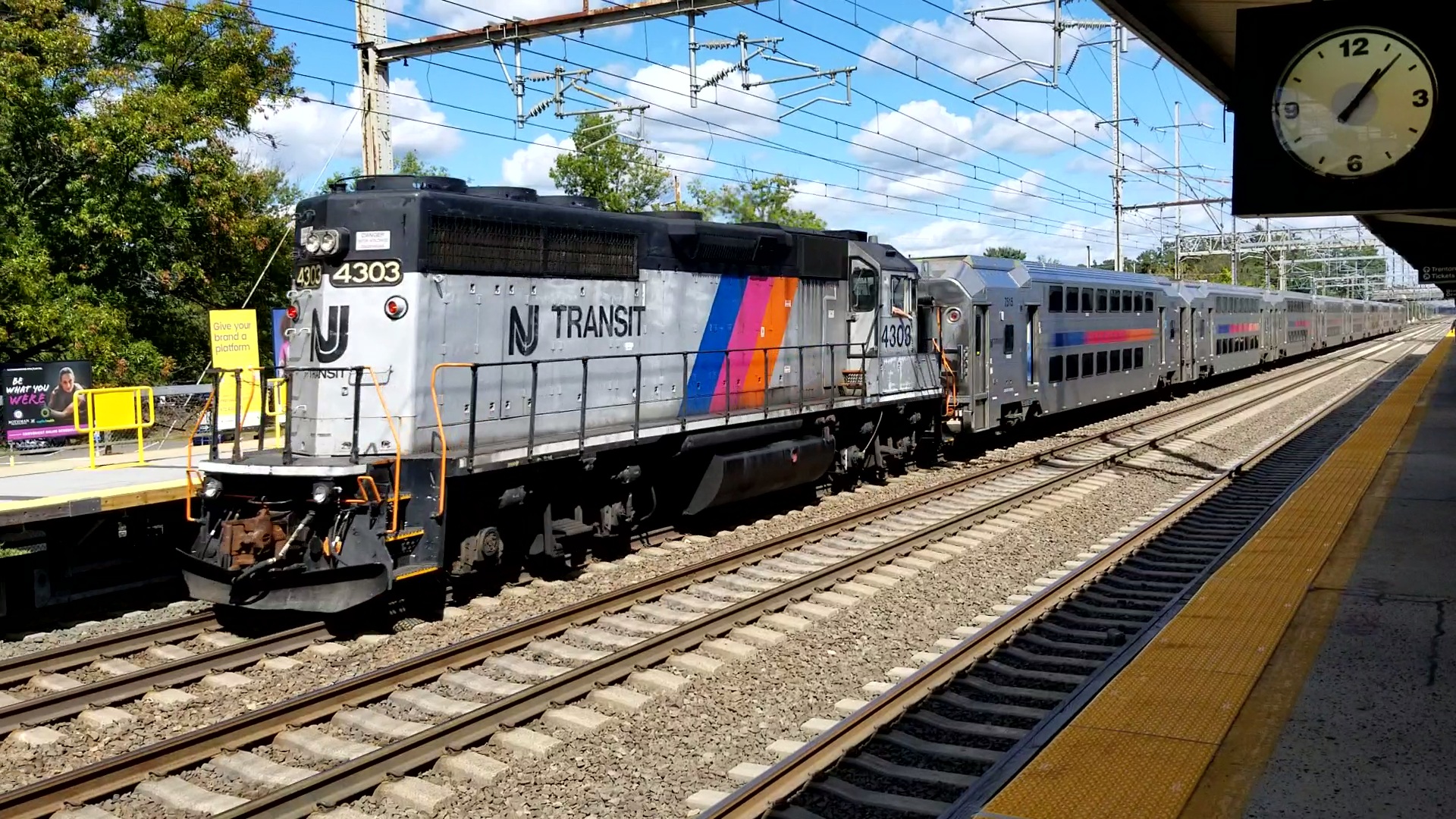 So many pics I see of 4303 towing something else, many times LHF, is it the official protect locomotive? If so, where is it based out of? Isn't it a Geep 40?
They tell me to act my age. I don't know how to do that. I've never been this old before.

Nice shot. What station is this?

I wonder how long it would take the Geep to get to 100mph with 9 MLV's.

DANGER - DO NOT GET OFF MOVING TRAIN

Back in the 1990s NJT ran two PM Peak "Diesel Expresses" (as noted in the NEC timetable) on the NEC weekdays.
One originated at Hoboken as a "Waterfront Connection" train; the other began its run at Newark Penn Station.

First stop was Metropark and New Brunswick, Princeton Junction, Hamilton (open 1998) and Trenton for both.
The WF train stopped at Metuchen and Edison. Equipment was usually an F40PH and Comet 2/3 cars.

I was riding the NEC back then somewhat regularly and learned that seats were available on these trains out of
NWK as compared to having to stand on trains out of NYP boarding at NWK.

These two trains offered a fast ride to TRE on the NEC and had good ridership. What made these two trains
interesting to me is how the equipment on these two sets would normally be coupled together at TRE and than
run deadhead back north to the MMC at MAS. This combined train was an interesting sight on the NEC at speed.

Back during 2000-2001 at some point the two NEC "Diesel Expresses" were discontinued.

Atlantic City Line equipment is regularly deadheaded over the NEC at intervals as necessary to and from the MMC.
NJT Diesel-powered trains on the NEC deadheading as the 4303 and multilevel cars are not common but are not
rare - if one has a general idea when these sometimes-scheduled moves are made...MACTRAXX
EXPRESS TRAIN TO NEW YORK PENN STATION-NO JAMAICA ON THIS TRAIN-PLEASE STAND CLEAR OF THE CLOSING TRAIN DOORS

by planespotting
Tue Sep 28, 2021 7:28 pm
Thanks, all. Yes, Princeton Junction. Yes, I think GP40 (not GP38). I think you can tell because it has three fans on the roof toward the rear. GP38s only have two. So cool to think that was AC equipment move! No idea they did that over NEC.

by MACTRAXX
Tue Sep 28, 2021 7:54 pm
PS: NJT Multilevel cars are not regularly used on the Atlantic City Line.
Most AC Line trains are about four single-level cars on average.

This train looks to be a deadhead move between the MMC and Morrisville Yard judging by the length.

For the record the only AC Line trains that regularly used assigned (special) multilevel cars was the ACES Train
which ran from NYP-NWK nonstop to Frankford Junction/Shore Tower changing direction to/from the AC Line.
That service used both a diesel locomotive and an electric locomotive (remember the ALP44?) at either end.
https://en.wikipedia.org/wiki/Atlantic_ ... ss_Service
MACTRAXX
EXPRESS TRAIN TO NEW YORK PENN STATION-NO JAMAICA ON THIS TRAIN-PLEASE STAND CLEAR OF THE CLOSING TRAIN DOORS

4303 is usually at Morrisville.
Since my friend continues to chain smoke nonstop, she is probably an Alco.