by MaRoFu
Thu May 17, 2018 3:28 pm
If you look at Freedom Park in Fort Lee on Gogle Earth, it resembles a ROW of some sort.The ROW is almost traceable up to the GWB lower level toll plaza on the north. Head south towards Cliffside Park and there is a Railroad Avenue along the ROW. The ROW is still pretty obvious up to the Palisade Avenue/Gorge Road junction (occupied by Cliffside Park Housing Authority building). I'm guessing this railroad ran along Palisades Avenue, if you go south to the park you'll notice something that resembles a wye junction. After here the main probably ran west then curved south on what is now Main Drive. There seems to have been another wye junction with Riverview Drive. If you head west from here, you run into 79th street. Some rail may have ran through here because it is a rather wide street, complete with some medians. Where the rail went west of here is unclear. I'm not sure about the other spurs I mentioned here but JFK Blvd East may be the ROW for another railroad.

Also here's another bonus rail thing:
A trolley line ran through the South Fort Lee area as well. It probably branched off of Broad Avenue and went along present-day Route 5. The ROW is pretty clear if you look on Grantwood Blvd, which sits on the former trolley line. From here the Route 5 cuts through the ROW, and a clearing is visible running west along Route 5. Notice how the Route 63 bridge has a big opening underneath it. From here the ROW is taken up by Columbia Avenue, and it's all pretty clear. The townhouses along Kensington Drive take up a portion of the ROW before it goes back to Columbia Avenue heading down the hill. The ROW is then taken up by Undercliff Avenue, and right along Panorama Drive is probably where the old station was. There may have also been a funicular railway of some sort from Undercliff Ave to Kensington Drive.

by NY&LB
Fri May 18, 2018 9:48 am
Absolutely correct...the Public Service trolley lines. I grew up in Fort Lee and used that ROW as a walking path. Before the second deck was put on the GWB (1959) the Trolley ROW went under the approaches to the GWB, there were large stacks of rail in those underpasses, I believe they are still intact and before one direction tolls were put in place were used by the toll collectors to get from the PA GWB HQ to the WEST bound toll booths. The Trolley line also went under 9W where the entrance to the Palisade Interstate Parkway is, however, those underpasses were filled in, this is just before Coytesville which is where the Trolley line ended. South of main Street (Fort Lee) the ROW ran between the N and S sections of Abbott Blvd and is still very much intact today

by Shalom
Thu May 24, 2018 5:08 pm
That's the same company that became PSE&G, isn't it? I guess if they were generating power to run their traction lines, they probably had excess to sell to residential service, and now the trolleys are gone, their sideline became their main business.

by ExCon90
Fri May 25, 2018 3:17 pm
There was a big Supreme Court case decades ago which required power companies to divest themselves of their transit operations and spin them off as a separate company -- it was nationwide, and I think that's what happened with Public Service. (To some extent there had been cross-subsidization of transit operations by the power side of the business, and when the transit ops were spun off and could no longer be supported by the power side, the decline of sstreetcarsl began.)

Shalom wrote:That's the same company that became PSE&G, isn't it? I guess if they were generating power to run their traction lines, they probably had excess to sell to residential service, and now the trolleys are gone, their sideline became their main business.

They operated the bus network as well, into the early 80's when the state thru NJ Transit Bus Operations took over. It was known as "Public Service Coordinated Transport" up until the early 70's or so (with the "coordinated" no doubt a throwback to when they had multiple modes, including trolleys, to coordinate). During the last 10 years or so of existence it was known as "Transport of New Jersey", the name already evoking a future state takeover. Whether that was the intent of the renaming I do not know, but I do recall speculation to that effect in the press at the time (as that was also the era of increasing state/ govt involvement into rail transit as well).

Shalom wrote:That's the same company that became PSE&G, isn't it? I guess if they were generating power to run their traction lines, they probably had excess to sell to residential service, and now the trolleys are gone, their sideline became their main business.

The company that was formed by Thomas Nesbitt McCarter in 1903 was the holding company, Public Service Corporation of New Jersey ("PSCNJ"). Its three primary subsidiaries, in order of importance at that point in time were Public Service Railway Company, Public Service Gas Company ("PSGC") and Public Service Electric Company ("PSEC"). Each of these three absorbed hundreds of small railway, gas and electric companies. In 1928 Public Service Electric and Gas Company ("PSE&G") was formed and took over direct ownership of the assets of PSGC and PSEC. In 1948 after protracted litigation rather than become jurisdictional under the New Deal legislated federal Public Utility Holding Company Act of 1935, PSCNJ became a paper company to preserve the name, and PSE&G became the parent company with direct ownership of all electric and gas assets, plus the subsidiary transportation company which included buses and trolleys. Indeed, electric companies in the late 1800's were the offshoot of the trolley businesses. Businesses open late in the evening such as hotels and taverns asked the trolley company that was nearby to supply electricity for lighting. Eventually, that business grew and separate electric generation and distribution companies were formed to serve all types of customers including residential. In 1985 Public Service Enterprise Group, Inc. was formed to become a single state holding company, which therefore was permitted to be exempt from the federal Public Utility Holding Company Act, and PSE&G became its largest subsidiary. The other two large subsidiaries are PSEG Power, LLC an electric generating company, and PSEG Nuclear, LLC which owns and operates nuclear electric generating units. Both of these companies' assets were transferred from PSE&G to create a "firewall" between PSE&G's electric delivery business which remains fully regulated, and electric generation which operates in a wholesale intensely competitive market under lighthanded regulation.
~Ken :: Fairmont ex-UP/MP C436 MT-14M1 ::
Black River Railroad Historical Trust :: [/url]

by steamkk95
Tue Mar 08, 2022 5:56 pm
It was walking along Abbott Blvd in Ft Lee where it becomes a narrow ped and bike path at its north end, where I realized I was on a path that was once something else...especially since no homes or buildings front this path -- and I've been researching streetcars and trolleys in Northern NJ ever since.
An important relic of this past still stands in plain sight at the very south end of Abbott Blvd, next to the Pomodoro Italian Pizza place. That old PSE&G power plant must have provided the power for the line coming from Cliffside Park and ending at Coytesville, on the north fringe of Ft. Lee. And it could be reasonably assumed that homes and businesses in the neighborhood asked to be hooked up as well, so not only streetcars were enjoying electricity.
Grantwood Blvd is mentioned above -- "Grantwood" was a key trolley stop, from what I've read.
I've not come across any mention of funiculars or the like in this area, although there were some notable lifts and inclines down in the area of Jersey City Hts and Union City down toward Hoboken. It seems that the first trolleys to ascend to the palisade over Edgewater did so on a switchback path that was cut through the hillside. I assume this path became the current route 5, but I haven't found verification. Up on top, the line continued west along the center median of Columbia Blvd.
I found it fascinating to walk along Railroad Avenue in Cliffside Park. It's not a real through-street for cars, --at least not a major connecting road---there's even a block or two where it turns into a parking lot. And where the street ends, at the C.P. Housing Authority buildings, you can still follow the path of the line by following the power-line poles through the parking lots. (My exploring ended at the intersection of Gorge Rd and Palisade Av -- I do believe I read that one line headed down Gorge...but I don't have any info on that handy).
I'm reading Hamm's book, which I recently picked up off Ebay. A lot of stuff to take in.
Last edited by steamkk95 on Tue Mar 08, 2022 6:32 pm, edited 1 time in total.

by steamkk95
Tue Mar 08, 2022 7:13 pm
...and thanks to MaRoFu for providing a bunch of cool clues. The Kensington Drive mention is great -- now I see how the power lines coming up from Edgewater to the sharp curve on Rt 5 below Bluff Rd veer away into that development, and behind those townhouses (Mayfair La) to meet where Columbia Av intersects with Palisade Av. I had heard there was some sort of remnant of the path of the transit line inside this big residential complex -- now I'm seeing that this must be what that refers to.
And nice find to see the large underpass under Rt 63. Surely then this was where the Broad Av line came through (there were lines heading to Leonia and Englewood, if one was heading west from the amusement park.) 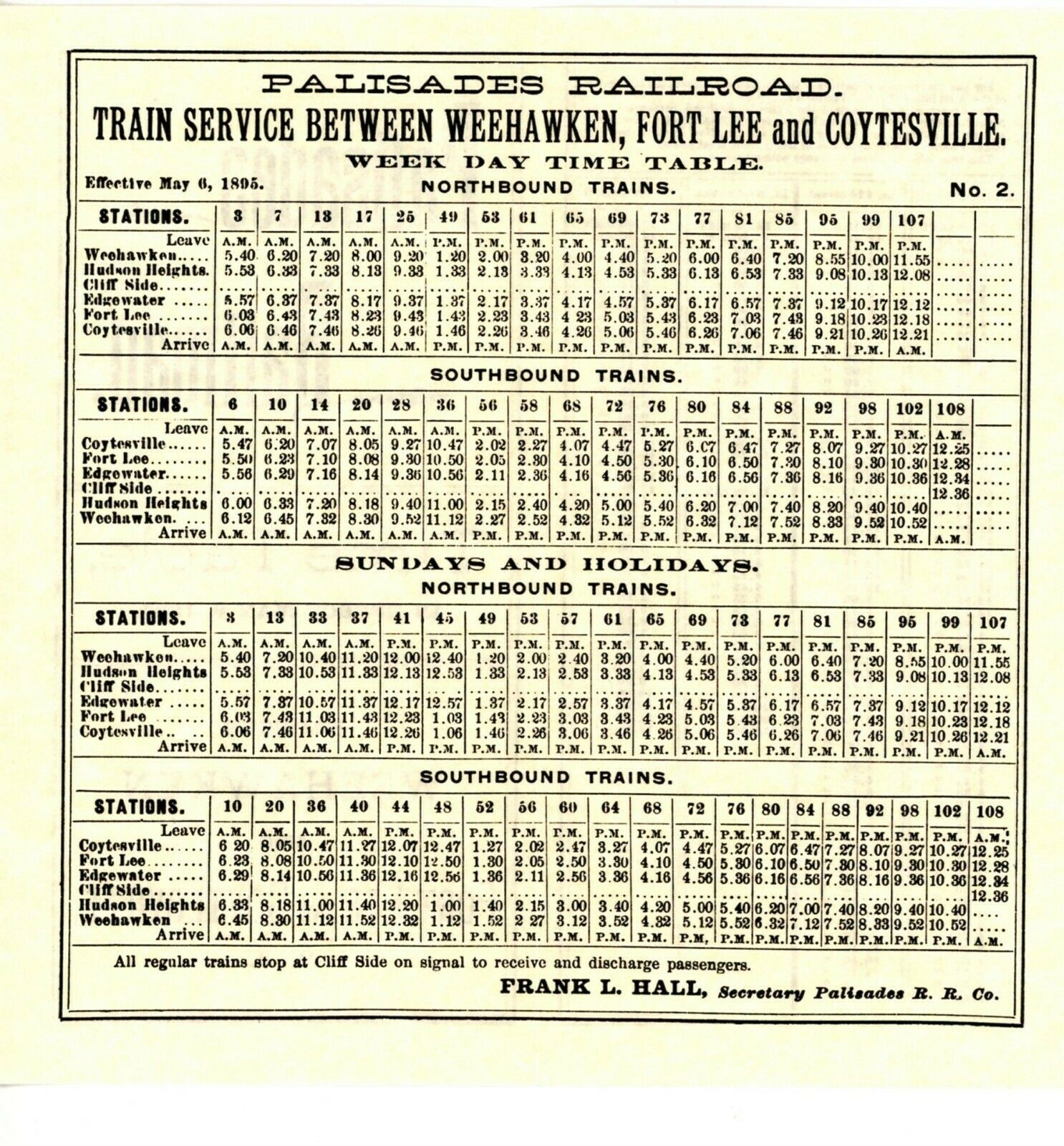 by JohnFromJersey
Wed Apr 27, 2022 3:47 pm
In the original plans for the GWB, the lower level was going to be added at the start (instead of later on), and they intended to have up to 16 tracks there.

The problem was, there were really no railroads around the Fort Lee area; the trolley ROW still existed but by no means could you be able to handle 16 tracks of traffic with that ROW I'd imagine, not to mention the grade issues of getting the trains down from the GWB once they were in NYC.

Not sure if the trolley lines were connected to the national rail network either. Besides old time tables and ROW on maps, I can't seem to come across anything on Historic Aerials nor any pictures of the trolleys in operation

Looking back on it, maybe they should've figured out a way to get two tracks on the old trolley ROW and run *something* on the GWB... would help with the Hudson tunnel issue.

by CarterB
Wed Apr 27, 2022 4:47 pm
Psnj hudson river line edgewater.jpg
The Hudson River line of the PSCT went down the palisades from Cliffside Park to a ferry terminal in Edgewater via it's own ROW and hairpin curve, which was at approx N 40.82532 W 73.97808. {Just below Lafayette Ave , Cliffside Park) Double track line down the palisades. The area of the hairpin curve and parts of the rest of that ROW still exist to this day, but hard to get to. If you use https://www.historicaerials.com/viewer, put in that location, use the "aerials" function for the year 1966, and you can see almost all of the ROW. 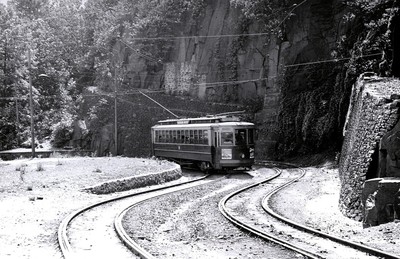 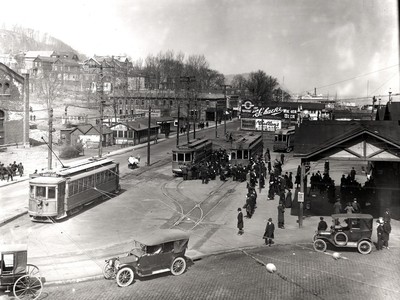 You do not have the required permissions to view the files attached to this post.
Bring back the Slumbercoaches!!

by CarterB
Wed Apr 27, 2022 5:44 pm
The original lower deck of the GWB was to have four track extension of the A line subway with a big loop on the NJ side serving several towns there.
Bring back the Slumbercoaches!!