Tommy Meehan wrote:Sad news. Of course it wasn't built as a railroad station, in 1875 the old Nanuet & New City established a stop on Bardonia Road and rented space in the building as a ticket office. The other tenants were a general store and the Bardonia post office.

How about the old New City station. Does anyone know if that's still standing?

Bardonia, when I visited it, was also serving as a residence cause people went into apartments.
I didn't get into teaching for the promotions or the pension plans or so I could get to the golf course by 3:45. I did it because I wanted to help you kids. I'd forgotten that, till today. -- Principal Peter Prickly. by Tommy Meehan
Tue Nov 05, 2013 12:19 pm
The building in Bardonia would've stopped being used as an NJ&NY passenger station in 1938 when passenger service ended. Stopped being used as a railroad office period because the New City Branch was pulled up. I'm not sure when the general store or the post office (that occupied the rest of the ground floor) moved out -- the current post office looks like it dates from the 1950s or later -- or when the building was converted to all residential. Below are two 'then' and 'now' photos, both looking east. One was taken in 1905 showing (just barely discernible)the New City Branch single-track and the grade crossing sign east of the building. The later shot, from a year or two ago in Google Streetview, shows how the building was remodeled but is still recognizable as the original. (e.g. - The roof line, the upper windows, the location.)

It's actually a shame the building wasn't saved. I think the general store was founded by the Bardon brothers for whom the area is named. I don't think there's too much of the original Bardonia left other than this one building. Most people in the area today probably have no idea of the building's history. In fact, people I have spoken with had no idea there was once a railroad line running between Nanuet and New City.

Edited - I loaded another copy of the photo that shows the crossing sign.

by Roadgeek Adam
Wed Nov 06, 2013 4:04 pm
There hasn't been passenger service since 1939 (that is the correct year). Unless Clarkstown wanted to advertise it as one, I doubt anyone would have ever known that it was a passenger service. I bet you in fact that most people who knew that from the days when it was one are gone or in their oldest ages. It really is unfortunate given the fact that many people don't actually bother caring about the history of their town. And to boot, Bardonia is slowly becoming antiquated as just another area of the neighborhood and not really distinctive in any way.

It is really unfortunate given the fact we lost Leiters (IN) in June 2013 and now are going to lose Bardonia along with Enderlin station, which caught fire on October 5, 2013. This has not been a good year for Erie preservation. 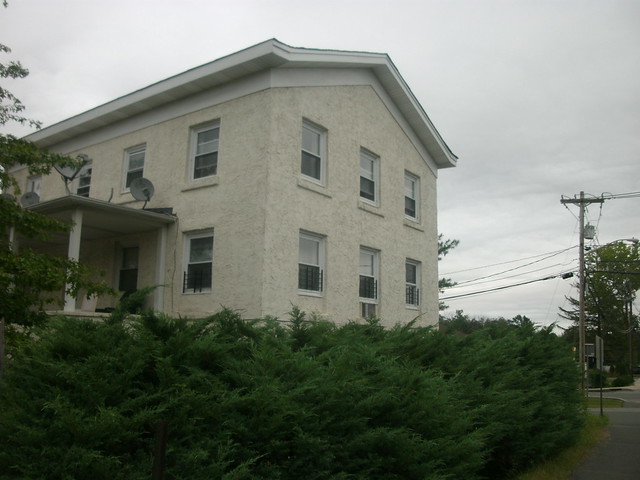 I didn't get into teaching for the promotions or the pension plans or so I could get to the golf course by 3:45. I did it because I wanted to help you kids. I'd forgotten that, till today. -- Principal Peter Prickly.

by McGregor35
Wed Nov 13, 2013 6:21 pm
Here's a photo my father took of the Durant station circa December 1928. My uncle is in the middle of a group of their scouting friends from Brooklyn. I have no idea why he's dressed up. I've always assumed that the track is heading north toward New City. That's Laurel Road in the background.

My great-grandparents lived on a small farm directly across from the intersection of Laurel Road and South Main Street, where St. Paul's Lutheran Church stands now. My father and uncle and their friends would come up from Brooklyn by train from time to time to camp out in the woods and fields of their grandparents' farm.

There were four stations on the New City Branch:

Germonds and Durant were non-agency stations, actually little more than shelters, for most trains only flag stops. Durant was established as a stop in the early 1900s as the area began to fill with commuters. It was supposed to be named after Thomas Durant who, presumably, owned land in the area. Durant was best known as one of the financiers who helped organize the Union Pacific Railroad. The entire New City Branch was located in Clarkstown and the name 'Durant' does not appear on any town map as a hamlet or even neighborhood. Just Durant Road, off Laurel Road, east of So. Main St (Rt. 304). Which was, I'm fairly certain, where Durant station was located. As mentioned, that's Laurel Road in the photo, crossing the track behind the station.

by Tommy Meehan
Fri Nov 15, 2013 5:42 pm
I'm posting a topo map below which shows the New City Branch in 1890. You'll see at that time the station at Germonds had been established but Durant was still in the future. The future location of Durant was between the 'C' and the 'i' in "New City Br."

The maps were on two sheets (Tarrytown and Ramapo) and the Ramapo section (surveyed in 1888 and showing from Nanuet Jct. north) is posted below the first section.

by Jeff Smith
Sat Feb 22, 2014 3:56 pm
Tried to split this from the Erie's New City Station topic as best I could; I think this would be an interesting separate topic to follow. Also located in fallen flags-Erie.
Next stop, Willoughby
~el Jefe ("Jeff Smith Rules") :: RAILROAD.NET Site Administrator/Co-Owner