by SecaucusJunction
Mon Aug 15, 2011 3:42 pm
How did westbound EL commuter trains used to access Suffern yard before the current track alignment? I know now (since there are only 2 tracks) they have a crossover just west of Suffern station to the Rockland running track to access the yard, but I don't believe there were crossovers for all 4 tracks back in the 70's and 80's. I believe the 4 tracks went down to 2 tracks right by the east end of the yard, but I can't figure out how the train would get into the yard from Hoboken. Anyone know?
I think it may be possible that NJ Transit might not be the perfect, infallible organization that most people assume it is.

by Tommy Meehan
Wed Aug 24, 2011 7:06 pm
I rode to and from Suffern when it was still Erie Lackawanna but really can't provide a specific answer about the track layout. Sorry. I can say the trains layed over in the middle of the yard, close to the Thruway overpass, you could see your train laying up in the yard (tho just barely as I recall) from the eastbound platform. They seemed to get in and out of the yard fairly easily.

As I think about this I believe that was the turn jobs, that you could see from the eastbound platform (if there was nothing in the way). When they were just about ready to pull down to the station to go east you'd see the headlight come on. The trains that tied up overnight, I think their storage tracks were further west, west of the Thruway overpass. They might've entered those tracks from the west too.

I can tell you that, though I only go back as far as 1967, the road switchers used to run around the train at Suffern yard. The long end would lead westbound, the short hood would lead eastbound. I never saw them operate a single E unit on a Suffern train, always a pair.

Back in steam days there was a small roundhouse and turntable at Suffern. Near the wye to the Piermont Branch. It shows up on vaulation maps from the 1920s (if you can find one). I got that information, btw, after an inquiry to the Erie Lackawanna Historical Society, of which I am a member.

by brooklynparrot
Thu Aug 25, 2011 12:28 pm
I have fond memories of Suffern and had the pleasure of being on-hand to witness a single E on the point of a Hoboken-bound local at Suffern back in 1966. This photo was taken by my Dad with our trusty old Pentax. 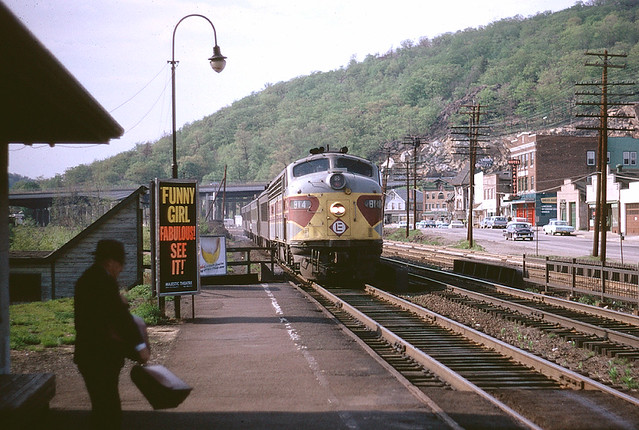 by Jeff Smith
Thu Aug 25, 2011 3:13 pm
What a terrific picture! Thank you for sharing it, and welcome to the site!
Next stop, Willoughby
~el Jefe ("Jeff Smith Rules") :: RAILROAD.NET Site Administrator/Co-Owner

by Tommy Meehan
Thu Aug 25, 2011 6:40 pm
That is a terrific photo, a trip back in time. You can see what I was talking about, on the left-hand side under the Thruway overpass. Somewhere in there you would see the headlight come on when an eastbound was ready to depart, to pull down to the station.

I think you can also see the outline of SF tower over on the left too, in the shadows of I-87.

Never say never but if that train had come west from Hoboken earlier and then turned at Suffern, I don't know how they got the E unit pointed in the right direction.

by Jeff Smith
Fri Aug 26, 2011 11:16 am
I'm wondering myself how far it ran. How far was EL running passengers back in 1966?
Next stop, Willoughby
~el Jefe ("Jeff Smith Rules") :: RAILROAD.NET Site Administrator/Co-Owner

Jeff Smith wrote:How far was EL running passengers back in 1966?

I was thinking more in terms of commuter traffic.....you know, as the title implies?

Well actually on the 'Erie side' they weren't going to Chicago anymore anyway, at least not from Suffern. I think the furthest you could go by 1966 was Port Jervis. There was a Binghamton train (connecting to the 'Lackawanna side' passenger trains) but I wanna say that was gone by 1966. I think it was.

Btw, I went to Suffern a bunch of times in 1967 to watch the evening rush -- and judging by the shadows in the photo that shot was taken in late afternoon -- and I really never did see a lone E unit on a Suffern train. BUT!

In September 1966 the EL discontinued A LOT of trains so possibly there were single E unit trains previously. Where would they have turned the unit at Suffern? Maybe using the Piermont Branch? There was no wye there when I saw it but there could've been in 1966.

by frank754
Fri Aug 26, 2011 4:24 pm
Usually they used the E-8's on the Port Jervis runs and they had the yellow stripes one the coach window borders for these. I don't think they turned them at Suffern, but there was a wye in Waldwick where I've seen E-8's being turned. A few runs originating in Waldwick used E-8's, and they were usually only used for Bergen County line trains. The locals (through Paterson) used RS-3's and GP-7's almost exclusively to Suffern. Seven trains (IIRC) terminated at Waldwick and were stored in the year there nights and weekends. The last through train to Binghamton was in 10/66 and connected with the Phoebe Snow. It would most likely have used an E-8 and the through (gray with maroon stripe) coaches. On the commuter runs, I personally never saw more then one engine on the head end.

by Tommy Meehan
Fri Aug 26, 2011 10:04 pm
Judging by the foilage I would guess this photo was shot sometime between May and September in 1966. I have a NY Division public timetable issued April 24, 1966. I looked at it to try and figure out what train this might be.

There were four eastbound trains shown at Suffern whose passage would seem to fit with the late afternoon or early evening shadows visible.

I don't think it's 58.That was the eastbound side of No. 53, the early morning Port Jervis local known as the 'Newspaper Train." In addition to the dailies from NY City 58 carried an RPO and REA express. The RPO deadheaded back east so the train in the photo definitely does not look like 58.

Could it be 1170 or 1172? Maybe. Someone once told me -- maybe even in this forum (and I think they worked that line when it was Conrail) -- that if need be an E unit could be run from Suffern up to Harriman and turned.

Or it could even be No. 22, the 'Erie side' Phoebe Snow connection between Hoboken and Binghamton. (Trains 21 and 22 -- called the Southern Tier Express?-- were still running in the summer of 1966 but it was their last.)

Should've clarified, 1170 and 1172 were Hoboken locals that originated at Suffern.

by Jeff Smith
Sat Aug 27, 2011 9:38 am
Tommy, thanks for that info! You're still in the area; do you think the tier would support a daily Amtrak train? Or trains past PJ? I realize it's 99.99% not likely due to the cost/benefit, plus Amtrak does not need another NY terminal (Hobo). Of course, you never know if Schumer will come up with some funds for Binghamton (more likely via Scranton).

I was also wondering; there were so many branches back then. Piermont, of course, curving off the Pascack Valley, which itself use to run up to the West Shore. Also, there was a branch (still there, but a rump version, I think) around Campbell Hall? that ran up to Newburgh and the West Shore. Always curious as to what kind of passenger traffic ran around up there.
Next stop, Willoughby
~el Jefe ("Jeff Smith Rules") :: RAILROAD.NET Site Administrator/Co-Owner

by Tommy Meehan
Sat Aug 27, 2011 11:47 am
Jeff because of the 1938 bankruptcy Erie was one of the first NY Metropolitan roads to really make a strong effort to discontnue suburban passenger service.

I have the exact dates around, scattered in varous articles and books, but off the top of my head here's what I recall-

The Piermont Branch lost service in the late 1930s. First between Piermont and Nanuet while a couple of NJ&NY trains continued to use the branch between Nanuet and Suffern. That ended about 1938 around the same time the New City Branch was abandoned. NJ&NY discontnued passenger service beyond Spring Valley in the same tme period.

Newburgh was served primarily via Harriman. There was even a through commuter train from Jersey City. That service also came off in 1938 I think. The little network of branches Erie operated in the Campbell Hall area were really rural affairs, most operated with gas motor cars by the 1920s and passenger service started being wthdrawn in the 1920s too.

Next to go were off-hour trains on the NJ&NY and Northern Branch to Nyack. They were both rush-hour-only by the early 1940s.

I was thinking that perhaps that train in the photo is No. 22. People I know who rode it and worked it back then said it carried very few passengers. There wasn't (and isn't) much population along the line west of Port Jervis. So maybe one through line Stillwell coach would've been enough to handle 'west of Port Jervis' riders and the two rear coaches (that look like commuter Stillwells) were to handle whatever extra ridership the train garnered between Port Jervis and Suffern.

So as much as I would love to be able to ride Port Jervis to Binghamton I guess my answer is (as a taxpayer), I don't think expanding service west from Port Jervis would be a very good idea.

by frank754
Sat Aug 27, 2011 4:33 pm
Could be the 22, but I was assuming the Binghamton train would use the gray coaches, I'm still looking but have found these 2 photos, interesting consists back then.