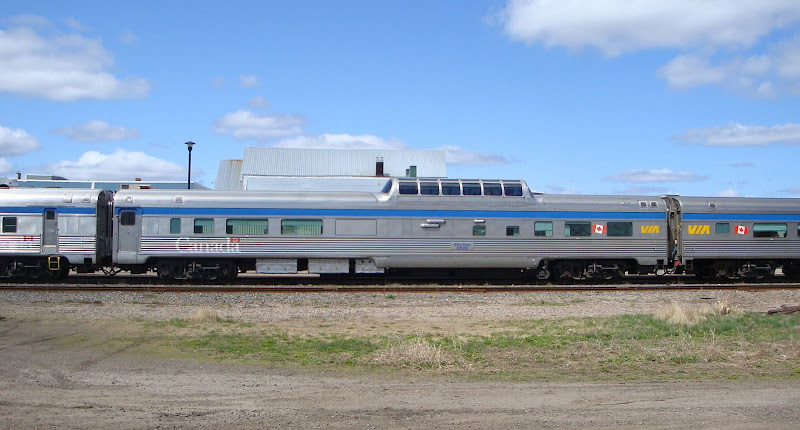 Since last November, one of the three Ocean consists has used the Budd Stainless-Steel equipment which included a Dome, the other two consists operating on the Ocean use Renaissance cars and do not have Domes. This one Budd consist was used during the winter while the third Renaissance set received modifications to provide Barrier-Free Access (this is ADA in the US) and has now returned to the equipment cycle.

Here’s a brief history of Domes Down East:

Here's the Ocean at Halifax in June 1984 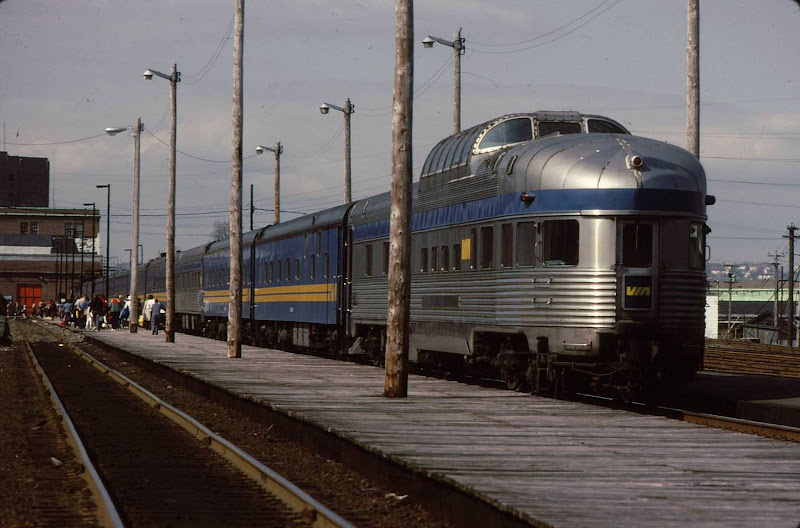 In June 1985 the "Atlantic" was restored through Saint John and across Maine and a Park Car was used year-round. 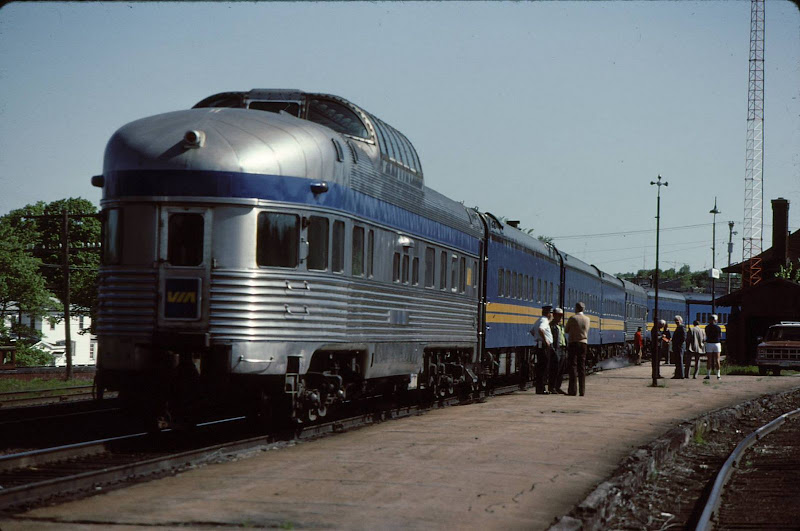 Between June 1985 and January 1990 the Ocean operated between Montreal and Moncton only via Campbellton and did not have a Dome.After the major cutbacks in January 1990, the Ocean was extended back to Halifax and the equipment used interchangeably between the Atlantic and Ocean. Three days a week the Atlantic operated via Saint John and the Ocean; three days a week via Campbellton. There was always a Park Car but I've checked several consists I recorded and can't find both a "Skyline" and "Park" running in on the same train regularly until they were HEP’d in '92-'93.

After the Atlantic was discontinued in December 1994, the Ocean began running 6 days a week between Montreal and Halifax. Three days a week it was combined with the Chaleur west of Matapedia and on those days there would be a third Dome in the consist.....the Chaleur’s Skyline.

Things pretty well remained the same until the Renaissance equipment was introduced 2003 and the Parks and Skylines were removed. Domes are used when “Budd Stainless-Steel” consists are filling in for the Rens on the Ocean like they have the past several winters

And the Park Cars continue to be attached to the Ren consists in “Touring (Easterly) Class” service during the summer and fall.....First run this year is from Montreal on June 16.

And let’s not forget one of the shortest Domeliner down east: the Bras d’Or from 2000 to 2004 using the Ocean’s Skyline and Park Car which were laying over in Halifax anyway and could make a weekly run to Sydney & back without disrupting the Ocean equipment cycle.

The original "CP” Atlantic used Skyline and Park Cars between Montreal and Saint John at various time seasonally thru the '50s and '60s but when I started to ride in the early '70s, there was always a Skyline in the consist. 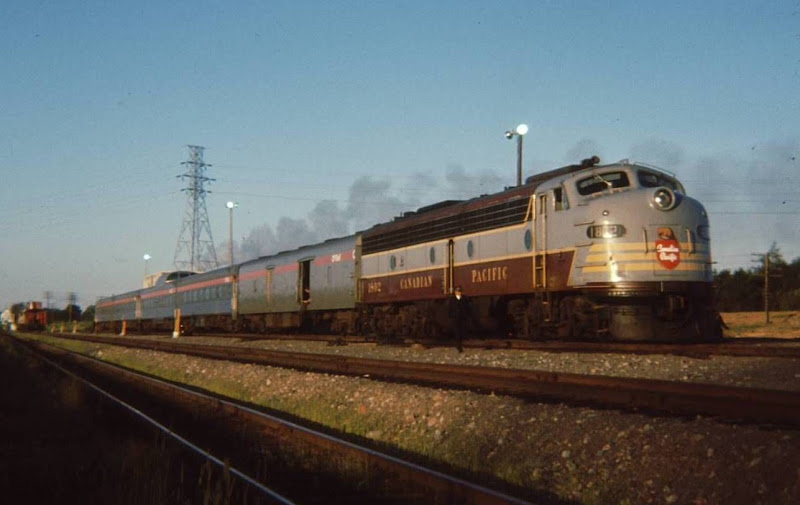 VIA took over the CP Atlantic in October 1979 and extended it thru to Halifax.....Basically a re-routed "Scotian" using its numbers: 11 & 12 and the xCN "Blue Fleet" equipment without a Dome. A new train, the "St. Laurent" covering a portion of the Scotian's route from Montreal to Mont Joli, got the CP Atlantic's Skyline Dome.

The Chaleur replaced the St. Laurent in May 1983 but I don't believe it had a dome until it was HEPed in the early '90s. (Unless you consider the xMilwaukee "Skytops" used on the Chaleur in the late '60s and early ‘70s an "Honorary Dome")

A Skyline has run on the Chaleur since the early ’90 and occasionally a Park car also on the long consists to Gaspe at Christmas.
Last edited by NS VIA FAN on Wed Apr 28, 2010 3:27 pm, edited 2 times in total.

by jp1822
Wed Apr 28, 2010 11:08 am
Thanks for the history. The Chaleur could definitely be augmented by both a Skyline and Park Car, but I don't see that in the cards as long as the Chaleur and Ocean run as one train over part of the route. The Chaleur is really a unique experience offering lots of nice scenery! VIA could create a "Tourist Class" on the Chaleur with the Park Car if it were to run (Chaleur and Ocean) as two separate trains in peak summer or even holiday season.

Has the Chaleur been running the complete route out to Gaspe recently or making short turns again? I was thinking of taking the Chaleur for a trip a late May. Wonder if a full Diner will be added to the Chaleur's consist this year or not - or just use the Skyline Dome car for diner/lounge etc.

by timberley
Wed Apr 28, 2010 4:44 pm
I had the good fortune of riding the Budd consist on the Ocean several times over the past two winters between Montreal and Truro, NS. The dome adds a huge element that is sadly lacking in the Renaissance consists, and is itself worth riding the Budd cars for. Yes, the summer Ocean does have the Park car for Touring class passengers, but I can't see myself ever being able to afford that class in the near (or even slightly distant) future. The Skyline dome was a huge plus for coach class passengers, by both providing the dome, and a lot more lounge space than the joke of a lounge in the Renaissance service cars.

timberley wrote: Does anyone know if this was the last winter for the Budd consist being used on the Ocean? It would be a shame if it is, but I suppose the 3 consists of Ren cars should be done by now.

You're in luck!.....Just did a sample booking for next January and there's one Budd set showing......the other two are Rens.

timberley wrote: Does anyone know if this was the last winter for the Budd consist being used on the Ocean? It would be a shame if it is, but I suppose the 3 consists of Ren cars should be done by now.

You're in luck!.....Just did a sample booking for next January and there's one Budd set showing......the other two are Rens.

Also, the 1980's pictures of the Budd cars remind me how good Via trains looked before the "graphic designers on crack" phase of Via's history, where "Canada" was painted over the fluted stainless, the letterboards got a yellow stripe, and the Canadian flag showed up on more places. No knock on the Canadian flag, just a call for restraint: blue letterboards, yellow Via logo. Keep it clean looking.
Dig the new rr.net Instagram account: @railroad_dot_net