Pertaining to all railroad subjects, past and present, in the American West, including California, Arizona, Nevada, Colorado, New Mexico, Wyoming, Montana, and The Dakotas. For specific railroad topics, please see the Fallen Flags and Active Railroads categories.

by Hauspiper
Sat Nov 15, 2008 11:35 pm
Defiance Coal Company 0-4-0 # 1 at the Railroad Museum of Long Island in Riverhead NY is in dire straits. The 1921 built 40" gauge Porter which was once in the collection of Dr Stanley Groman's Rail City in Sandy Creek NY.It latter ended on long island in the 1980's when it was sold to John Degan of Southampton NY who restored it to operating condition and operated on rollers placed on a trailer and was steamed up at many events on Long Island. In 1999 it was donated to the museum. Part of the deal was it had to remain under cover which was some what met her boiler sticks out into the elements. She is in worse shape now then she has been in a long time. While the museum bored sits and plays with their Lionel trains the equipment rots away as the two pit cars are rusting away to nothing that came with the locomotive. A few board member's have raised questions about the new toy train goal but they fall on deaf ears. There was a chance to save one best examples of a class of passenger car left and turned it down so they can watch their toy train go around the pitiful layout and selling 027 cars. The #1 along with the other equipment is in limbo the man power was out there to work on her but they fell to hears beautiful dreamer toy on a layout instead of seeing this locomotive that was only a few years ago operating overhauled.
[steamlocomotive.info]
Olaf The Red
US Merchant Marine

I just fell upon this old post by one of my favorite young Merchant Marines, (really), going on about decision making at the Railroad Museum of Long Island. That was four years ago and allot of coal ash and clinkers have fallen through the grates.

I understand Mike's posting on the Western Railfan Forum as our H.K. Porter #1 was built for the Defiance Coal Company of Gallup, New Mexico and ran there from 1921 through 1952. I believe Mike was trying to interest Western Railfans in what he perceived to be waning interest in the locomotive at the Museum.

Happily, Mike was mistaken. It has been, from the very beginning, the objective of the Museum to put #1 back in steam as an educational exhibit. I am pleased to report on a number of benchmarks that have been passed with H.K. Porter #1.

In October 2010 a hot water hydotest was performed and we reached a pressure of 140 psi before experiencing leaks in some globe valves. New packing is in order. The boiler and tube sheets are whole and no leaks were found. Overall a very successful test.

This year attention was paid to the wooden cab. All damaged plywood inserts have been removed and new inserts have been fabricated. The cab was sanded and primed and will be repainted in gloss black paint. Recently, attention has returned to the boiler. A preliminary inspection by the New York State Department of Labor, Boiler Division was performed in October and the locomotive was deemed operable. Her grates have been dropped and the firebox and smoke box wire wheeled and cleaned. A source for a donation of new globe valves has been found. The sand dome and smoke box cover have been removed and the Strasburg Railroad Company will be performing an ultrasound test scan of the boiler and firebox on December 4-5.

We plan to continue with NYS Inspections during 2013, next a hot water hydrotest with inspectors present and then a test firing with inspectors present. At that point the locomotive will be ready for NYS Certification. Finish painting and maintenance on #1's trailer will be performed and plans finalized for an operating schedule readied.

It is the Museum's plan to one day fire the H.K. Porter #1 four times a year: July at the Long Island Antique Power Association Meet and Tractor Pull; August at the Riverhead Railroad Festival; September at the Hallockville Farm and Folk Life Museum; and October at the Riverhead Country Fair. The locomotive will be an operating live steam exhibit remaining on her over-the-road trailer operating in-place on the trailer's rollers.

I invite those interested in this New Mexico coal hauler to check into our website http://www.rmli.org and Facebook page http://www.facebook.com/media/set/?set= ... 922&type=1 to view accomplishments as we move forward. We look forward to the day when H.K. Porter #1 steams again, it will indeed be a very exciting time on Long Island.

It is my pleasure to announce that the Board of Trustees of the Railroad Museum of Long Island voted last evening to contract with the Strasburg Railroad Company to replace the boiler tubes of "Defiance Coal" No. 1 and address a number of minor issues to bring No. 1 into compliance for operation. The RMLI "Steam Team" has done all it can at Riverhead and now it is time for the Pros at Strasburg to complete the tune up of No. 1.

I would like to recognize two additional team members to the project, Mr. Rich Carter and Mr. Jeff Jonap. Both members have had extensive steam boiler operating experience in their careers and, along with the "Steam Team" of the Long Island Antique Power Association, have been teaching our younger members maintenance procedures on the locomotive. Members George Wybenga and Ray Franke have completed painting of non-heated surfaces and renewed the lettering on the locomotive.

Arrangements are underway as I write to secure a crane and tractor trailer to move the locomotive and to determine the availability of Strasburg's overhead cranes and shop floor space. We anticipate a move to Strasburg very soon and plan for steam operations in July 2015 at the Long Island Antique Power Association Meet and Tractor Pull; August 2015 at the Riverhead Railroad Festival; September 2015 at the Hallockville Farm and Folk Life Museum; and October 2015 at the Riverhead Country Fair. 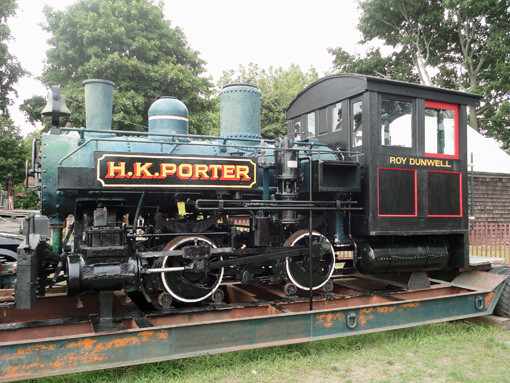