by byte
Thu Aug 01, 2013 6:29 pm
The word going around is that revenue usage of 2200-series CTA cars has come to an end, following the AM rush period yesterday (July 31st). No word yet on if there will be a "formal" retirement ceremony in the near future. A dark day for traction foamers and fans of angular 1960s design, a great day for cyclists, wheelchair users, and O'Hare-bound travelers with luggage.
That old car might be worth money!

by doepack
Thu Aug 01, 2013 11:30 pm
Two weeks ago, I made one last ditch attempt to get pics, so I took off east heading toward 290. Drove along both expressway portions of the route, then parked just outside the Loop, and spent about an hour in the subway, hoping for a last ride; or at least a grab shot of one in its final days of revenue service. Didn't see one. Drove past the yards at both Rosemont and Desplaines, nothing there either. Gone. Dammit. Opportunity missed. : (

So now, we say farewell to the old, stainless steel soldiers with the blinker doors, gray seat covers (before the rehab), and that particular squeal only these cars made whenever going around tight curves; it was especially identifiable in their early service years, and I'll never forget it. Fortunately, Chicago-l.org's 2200 series page has the disposition of the recently retired fleet, scroll down for details.

I'm glad the IRM got their hands on a couple for preservation, and thanks for keeping us informed about that, David...
--Dorian--

by byte
Fri Aug 02, 2013 1:16 am
I wound up catching one in revenue service on Tuesday, 24 hours before they went bye-bye for good - by accident. I overslept for work on Tuesday, and missed my usual Metra train. Wound up driving down and parking at a lot next to the Eisenhower on the UIC campus, and took the Blue line into the loop. The train I wound up catching was a UIC short turn that had been sitting in the Morgan middle track right there, and had 2246-45 as cars 5-6 in the consist. Pretty lucky catch (for a whole two stops til I got to La Salle...).
That old car might be worth money!

But they are part of the Chicago L legacy so appreciate it... 8-D

I thought the looks of 2200s were boring compared to the formerly painted rolling stock, before I knew of the significance of the Budd construction and before I appreciated the cleanness of the angled shapes versus the molded panels and trim on the 2000s and 2400s.

I wish one more set could have been preserved somewhere so that the possibility of a longer train of 2200s would exist should the need arise. Another member of FRTM discussed the thought of getting a set, which would be awesome. But the way things worked out over the years did not provide appropriate resources at the time it would have mattered. If there is still a reckless, compulsive way to get the cars, I wouldn't object. Out of all the post-PCC CTA cars, I think a 2200 set would be the most iconic for a small museum to have.
-C h r i s
Member of Fox River Trolley Museum
My Photography

After more than 40 years of service to Chicago Transit Authority (CTA) customers, the CTA will celebrate the workhorses of the Blue Line – the 2200-series rail cars built in 1969-1970 – with a ceremonial last trip this Thursday, August 8.

Most distinctive for their pivoting ”blinker” entry doors, the 2200s spent most of their service careers assigned to the Blue Line and have served hundreds of millions of people traveling between work, home, O’Hare International Airport and spots in between. The CTA’s oldest cars are being retired as CTA continues to upgrade its rail fleet as part of an aggressive modernization and infrastructure plan by Mayor Rahm Emanuel and CTA President Forrest Claypool.

Customers and rail fans are welcome to join in on the CTA tradition of saying “Goodbye, Old Friends” as the last, eight-car consist of 2200-series rail cars makes its final trip along the Blue Line from O’Hare to Forest Park and back. Normal CTA fares apply.

All eight rail cars will be decked out with their original exterior decals and will even feature interior advertising cards from the period when they first launched. Details of the event are as follows:

Thursday, August 8, 2013
Short-Run (Non-Stop): Rosemont – Jefferson Park
CTA will operate a ceremonial, short-run for those who wish to take part in the celebration, but cannot make the final full trip along the Blue Line. This train will depart from Rosemont and operate non-stop to Jefferson Park (just north of the station) before turning to make a non-stop trip back to Rosemont.

Full Run (All Stops): O’Hare – Forest Park
This will be the official last trip of the 2200-series rail cars on the Blue Line. The ceremonial train will depart from O’Hare and make all stops to and from Forest Park.

by JamesT4
Thu Aug 08, 2013 12:41 am
I think it would had been better to did this on an weekend, why during the middle of the weekday, who knows, lucky I have off, & planning on riding them, & getting photos of them for the last time in the morning, If I Can Wake Up that Early.
~JamesT4 (James T.)
Co-Moderator: Chicagoland Commuter & Transit Forum
Train, Bus, and other photos : flickr :: 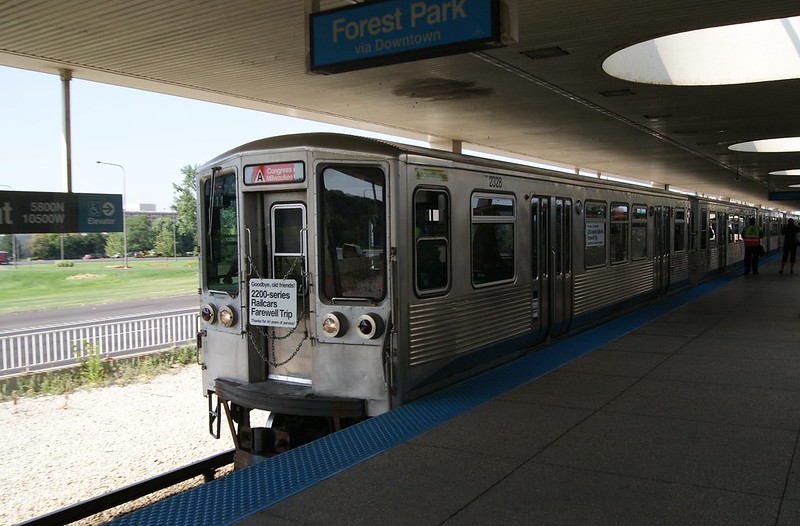 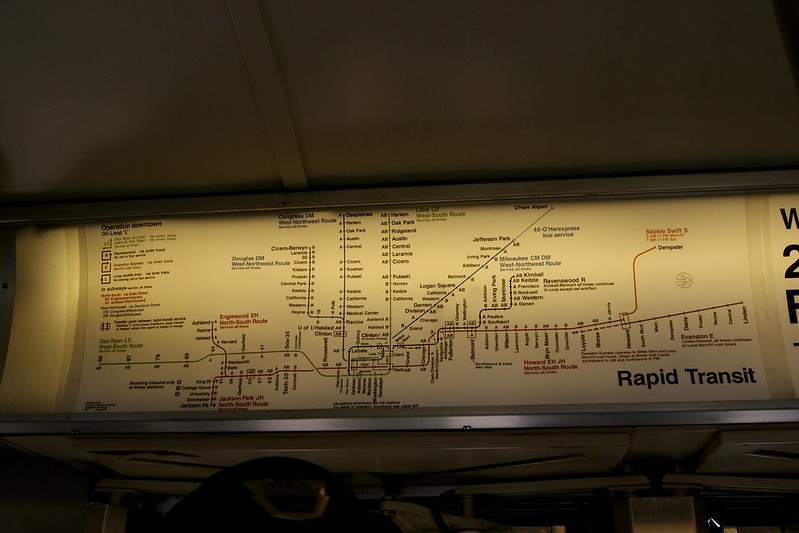 Congress-Douglas-Milwaukee Map from the early 1970s 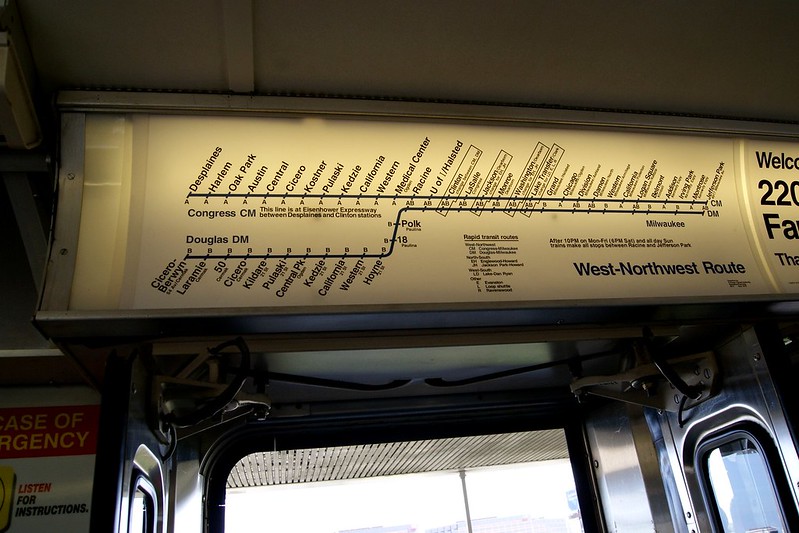 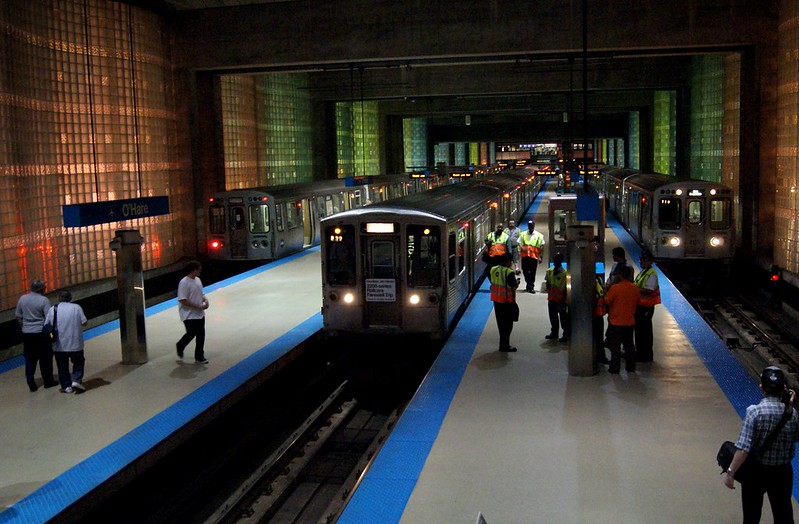 Train at Forest Park after going into the yard, & coming back towards the station. 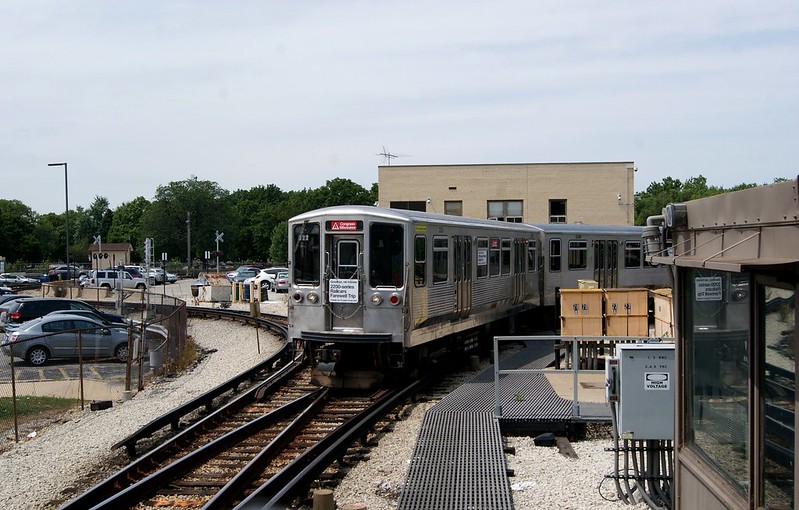 1st Run ran from Rosemont to the junction just before the Jefferson park station, & returned west to O'Hare. Made a stop in Rosemont for people who could not stay on before heading for O'Hare Station.

Gotten to O'Hare was on the center track and had all doors open so that people could get photos from both sides, we had 25 minuets.The run number to Forest Park, & back was 222. Along with the automated announcement, one of the crew was making announcements of all station stops, & telling passengers that it was an in service train, & that this was the final run of these cars. By what I seen some people was surprised & thought this was not an revenue train until the announcements says that it was an in service blue line train. Went to Forest Park everybody exited while the train set went into the yard, came back to the station, & went back to O'Hare. It was nice to see CTA do this for these cars.

I left some things out, but will add more things later on when I have more time to edit things.
~JamesT4 (James T.)
Co-Moderator: Chicagoland Commuter & Transit Forum
Train, Bus, and other photos : flickr ::

by doepack
Fri Aug 09, 2013 1:17 pm
Remember that missed opportunity I touched on earlier in this thread? Well, I didn't miss them yesterday, and with camera in tow, headed east again to meet them at Forest Park, not only to pay my last respects, but to acknowledge my railfan roots. Wise planning paid off this time (i.e., stayed on Roosevelt Road eastbound in Elmhurst, instead of taking the cutoff to 290, which would have meant a date in traffic courtesy of the "Hillside strangler"; wasn't interested in taking any chances on missing them), and the 2200's hit Forest Park not quite 5 minutes after I arrived on the platform. Didn't have time to ride, but it seemed to be a pretty good turnout of railfans and photographers. As we were waiting for the train to loop back around, a passenger walked up to me and asked about everyone standing on the platform, he thought the train loading ahead of it was out of service. When I explained the situation, he said "Oh", then had a strange, confused expression, and went on his way. Obviously not a railfan, but his reaction was still amusing...


Nice shots, James. But you left out one very important thing: Car numbers. So, allow me...

Eight cars, listed below in west to east order:

by MACTRAXX
Sat Sep 07, 2013 9:39 pm
Everyone: After a long absence from these forums I noticed that I missed events like this during the
Summer of 2013: The final retirement of CTA's 2200 series cars after 43 years of service...

During this time period 40 years ago - the Labor Day holiday in September 1973 - I returned to Long Island
to go back to school-I was starting the 8th Grade then after spending 7 weeks in Chicago in the Summer
of 1973...my first ever vacation trip out of the northeastern US - previous to that the furthest I had
traveled to was Philadelphia with my family to visit relatives...

I learned quite a bit about Chicago during that period and the CTA L system certainly stands out in my
mind...I remember those 2200 series cars as the CTA's newest cars then and I was especially interested
in the lines that traversed the expressway medians like the Dan Ryan line - as mentioned I remember
well the 55 mph service offered without any speed restrictions...

I will thank Graham Garfield for the good information posted on these cars - I especially noted that each
pair's retirement and eventual disposition was available on http://www.Chicago-L.org" onclick="window.open(this.href);return false; and I noted that some
would be preserved - Will the CTA preserve a pair for their historical fleet as I feel they should?

Other personal observations was that these Budd-built 2200 series cars were CTA's first stainless steel
car fleet as we know and when the 2400 series Boeing cars were built beginning in 1976 with sliding
doors that it would begin a long transition that would eventually take 37 years from "Blinker" doors to the
standard sliding doors widely used in rail transit service...

This CTA fan trip looked to be a fine farewell to this fleet and I noticed that older early 70s system map
which showed the CTA system as it was back in 1973...I also noted that GG showed when the entire 2200
series fleet was placed on the Milwaukee/O'Hare-Congress-Douglas route in 1983 which answered another
question that I had...

Thinking of CTA equipment: How much time do the 2400 series Boeing cars have left before they are retired
with the 5000 series cars currently being delivered?

MACTRAXX wrote: How much time do the 2400 series Boeing cars have left before they are retired
with the 5000 series cars currently being delivered?