Of course, we ignore that in reality he was just a rich kid who "took out his tantrums" by playing with his 1:1 Lionel trainset.

Gilbert B Norman wrote: ↑Mon Aug 08, 2022 8:26 am (I've now learned that PAS is strictly the 114 mile "Route of the Flying Yankee" Ayer-Mechanicsville and any N-S lines showing on their map are trackage rights).

Mr. Norman the north south CT River line (NECR at East Northfield to CSX at Springfield) is also considered part of PAS as they have freight easement rights over this MassDOT owned track not just trackage and ST also still dispatches, operates, and maintains it on behalf of PAS. They retained the easement as a condition of their sale of the track to the state. They also own outright the Waterbury branch in Connecticut.

by newpylong
Mon Aug 08, 2022 9:22 pm
As well as the Rotterdam Branch and a couple various Industrials tracks left within their territory.

by JCitron
Mon Aug 08, 2022 10:31 pm
Well guys, this has been an interesting read and I mean all 269 pages of it! The saga played out like one of those intriguing novels with suspense right up until the final chapter!

Just because, I checked out the conductor jobs for CSX and of course I saw the ones offered for the former PAR. The first thing that caught my eye was the pay. The pay for PAR is only up to 47K per year after all is said and done whereas on CSX it's 67K per annum.

That's quite a difference because the pay for working for PAR is what it was 14 years ago when I was looking to work for CSX. Now, I was wondering if this is because CSX is still honoring the old contract until everything is integrated into CSX or is there always going to be that big disparity in pay? Seeing that, makes think no wonder no one wants the job given the costs of everything these days.

Reading through the posts, yikes there were a lot of them, I noticed Lawrence came up quite often as it may play a bigger role than what it does today. Another new guy, whose username begins with Eli-something, asked about upgrading the yard. If any of you haven't seen it recently, it's pretty bad. I mean the rails are buried completely in the ground. The yard was never this bad in the past, but it was bad and got worse over the years. Like much of Guilford and later PAR, there were and probably still are plenty of standing derailments as the car weight squishes into the ground and rolls the track.

The video on the Worcester main was interesting. Those reeds next to the track aren't a good sign because they live in wetlands. Looking at the video closely, and we can see standing water between the rails at that location. When CSX upgrades those tracks, they'll really have to raise up the roadbed and put down a substantial amount of ballast, otherwise, that line is only a smidge above the old Watertown branch in this regard out to Wonder Bread.

Anyway, it's been quite some time since I last logged in here. Many years ago, I used to live about 4 miles from Lawrence over in Andover and used to ride my bike down to the yard to watch the switching. I got to know the crew there, who used to drive the old SW9 that lived there, as well as the old railroad police.

They were a great crew and one day they brought me around for a cook's tour of the yard. This was way before the strike. During this time, I was even offered a job and told to apply at Billerica. For some reason, I didn't do that, and life went on. Today, I'm too old and disabled to apply for the job, but it was fun looking at the job pages anyway.

by newpylong
Tue Aug 09, 2022 5:56 am
Yes sir, ST contracts must be used until new ones are ratified. The pay is one reason many have jumped ship from PAR to the MBTA or Amtrak after becoming an engineer. That and of course quality of life and not working for a Mickey Mouse outfit.

Yes sir, ST contracts must be used until new ones are ratified. The pay is one reason many have jumped ship from PAR to the MBTA or Amtrak after becoming an engineer. That and of course quality of life and not working for a Mickey Mouse outfit.

That makes sense. I can well imagine what it's like working for a place that appears to be barely surviving and getting paltry pay. I worked for a place like that which eventually went out of business. The employees took a pay cut while management got a raise. As the IT department, meaning I was the IT department, I lived on edge waiting for a critical piece of equipment to fail and not having any funds to pay for it. It did happen and I got blamed for the failure, which I pointedly stood up and fought back and left.

I have no idea why they came up with at either. It could be someone at the top rolled some dice and thought that was good enough to start at. $50 to 60K is more reasonable given the dangerous conditions of the job.


$47K is not even a livable wage in the Greater Portland area, with small one-bedroom apartments in undesirable neighborhoods now costing over $2000 a month.

Also, to put $47K in perspective, you could make the same amount of money as a rookie at the Five Guys in South Portland. Their starting pay is $20/hour plus tips.

I agree. That's good for a kid living at home but not for someone trying to make a living, but then again this is a lot harder work too!

CSX's purchase reminds me of some of those we see on the Home and Garden TV house flipping shows. CSX inspected the property and found the copper pipes ripped out along with the wiring. and what's left is a shell that needs a total rebuild from scratch because the ants and termites had eaten the beams and joists, and the roof was compromised by hail and rot. They saw the potential for something good in this old house, but it'll take a lot of work and resources to bring it back up to where it should be.

Guilford's operations, while they claim were always profitable came at a cost to the infrastructure and employees. If we look at what they did the moment Mellon and Fink took over, we cringe inside as they destroyed two working systems immediately and then ruined and threw another away in the trash.

Thinking about it now, I wonder how much of the railroad was a real estate property venture and the actual railroad was a tax write off to offset the profits. Mellon et al claimed the railroad was profitable, but how much. After writing off scrap and employee costs maybe but in reality, why was the system sold? I'm thinking Mellon got what he could out of it and spat the corpse off to the side much like how all the hedge funds and big financiers do to other companies.

The only reason Guilford and later PAR still ran trains is because they had too not because they wanted too. Now with a real railroad company operating the property, let's hope we see the return in business in due time once the infrastructure is rebuilt.

However, things weren't bad off the bat at all under GTI. The B&M was just coming off the massive 4R mainline reconstruction project and had a 40 mph East to West Freight Main. Besides new paint and symbols, the combined MEC and B&M were fairly harmonious until the lease (and subsequent strikes) to the ST was initiated. The workers at the time were hopeful that the cash infusion and combined system would be able to compete with Conrail in the Northeast and return both railroads to the forefront. Guilford used the dwindling carloads of its staple industries at the time as an opportunity to implement those draconian labor practices. The end result was the bottom fell out never to return. If industry was leaving New England, Guilford gave them a kick in the ass to get them out the door.

by bostontrainguy
Wed Aug 10, 2022 10:33 am
CSX has finally changed its System Map to include the PAR. Interestingly enough the line from Mattawamkeag to Saint John is not included even though it was in the STB application: 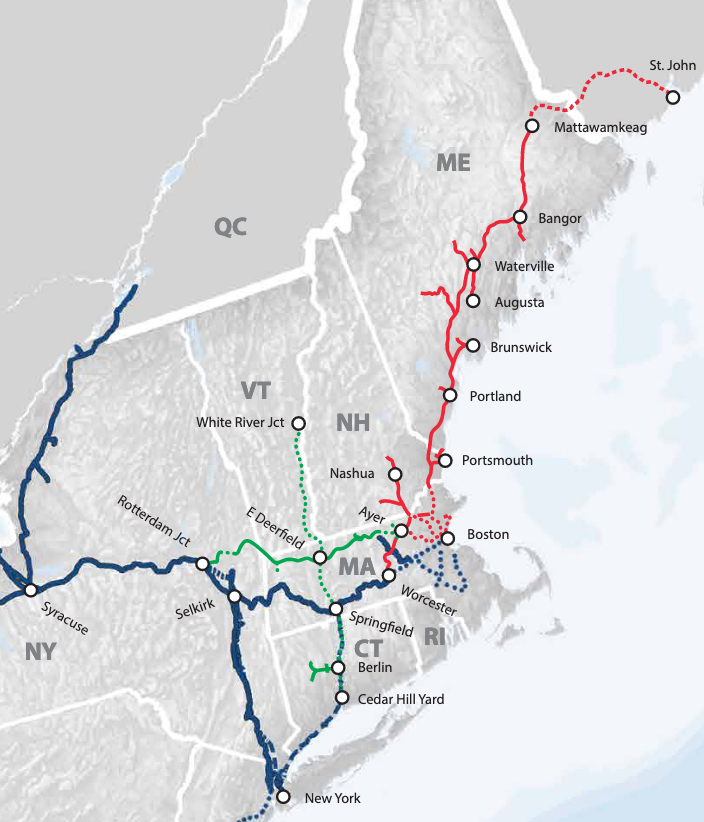 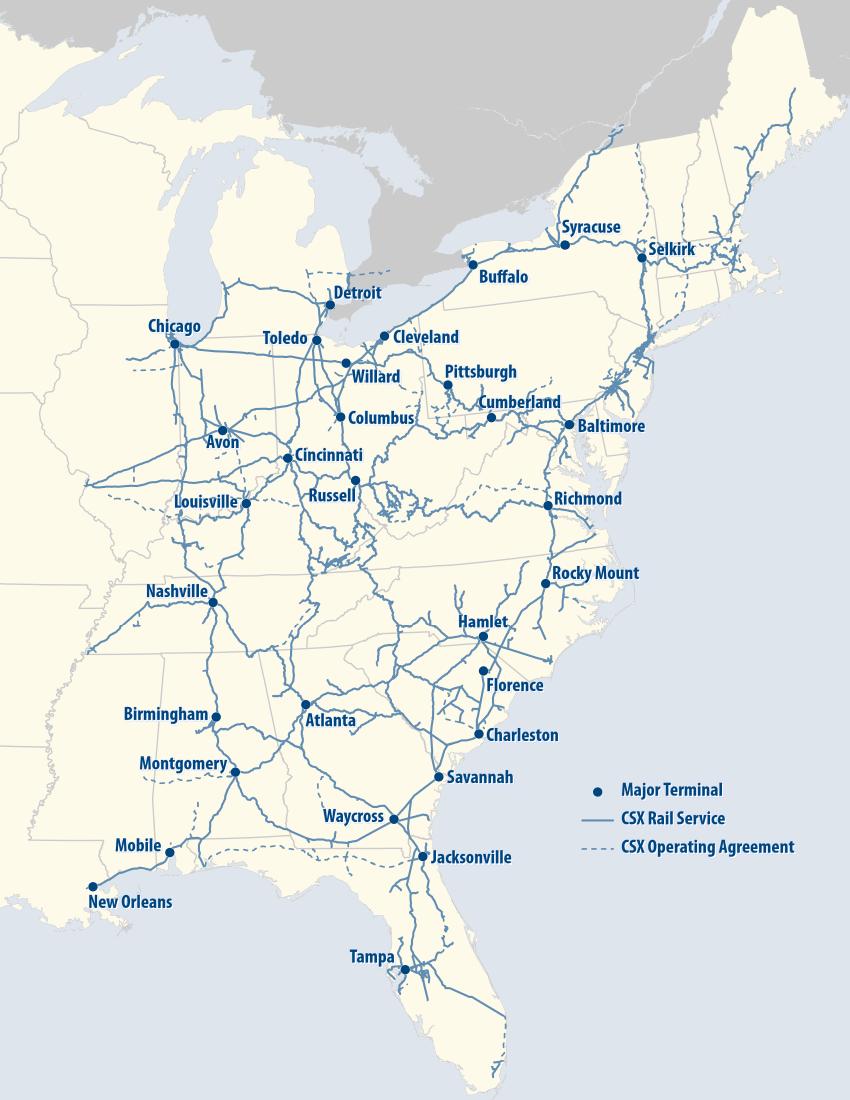 by johnpbarlow
Wed Aug 10, 2022 11:49 am
a.) I didn’t know CSX has an “operating agreement” over CP/D&H to Montreal given it owns the Montreal secondary via Watertown. NS does have a haulage agreement over this CP track.
b.) It’s interesting that CSX uses that same vague “operating agreement” label to refer to its 50% ownership in PAS as opposed to a partnership.

by newpylong
Wed Aug 10, 2022 11:55 am
I think it's sufficient information to inform a customer of their routing options and not clutter the map with 10 different line types.

bostontrainguy wrote: ↑Wed Aug 10, 2022 10:33 am Interestingly enough the line from Mattawamkeag to Saint John is not included even though it was in the STB application.

by taracer
Wed Aug 10, 2022 1:25 pm
The operating agreement dates back about 8 years. Selkirk crews were going to get qualified on CP to Saratoga as a part of it.

by johnpbarlow
Wed Aug 10, 2022 3:17 pm
Is it possible that CSX and CP are going to execute an operating agreement between Montreal and Mechanicville/PAS D3 as a condition for CP’s acceptance of the CSX / G&W role in PAS ownership etc?