Clerks vs. Shippers: Who Decided Routing?

by ExCon90
Wed Mar 27, 2019 3:13 pm
Shippers with any significant amount of traffic kept themselves well informed about how various routes performed overall and knew exactly how they wanted their shipment to go. If they didn't know how to find the cheapest rate (most did, and the biggest companies hired rate clerks away from the railroads to get the benefit of their knowledge) they could use traffic consultants, referred to informally as rate sharks, to find the best rate. I don't think it's possible to find out how many shipments were routed by shippers rather than a railroad, but it seems likely that the great majority of shippers, particularly regulars, wanted to retain control by specifying the route themselves rather than leave it to the railroad's local freight agent. Interesting to speculate, though, who the CGW might have given the car to at Chicago, since their revenue would have been the same, regardless. All the Eastern railroads had sales offices in Minneapolis (and plenty of other cities), and if a sales rep for one of them made a practice of regularly calling on local freight agents in his territory, and maybe leaving a few cigars, a freight agent for one of the roads serving Minneapolis might reciprocate by giving that (Eastern) road any unrouted cars--always provided that there was a valid route to the destination concerned--or even talk up the advantages of using that road in discussions with shippers whose practice was to specify routing.

by BR&P
Tue Apr 16, 2019 7:08 am
It was more than cigars, too. Shortlines were treated as a customer (which in a sense they were). Pens, calendars, coffee mugs, playing cards, cigarette lighters, scratch pads, you name it and somebody was handing it out. A lot of that stuff used to be in demand by railfan collectors, but today I can't give it away. Times change.

by ExCon90
Tue Apr 16, 2019 2:31 pm
I don't know whether I ever posted this, but when the PRR discontinued its wall calendar (I think at the beginning of 1957 or -58) railroad freight stations all over New England had a large square of pale green on the agent's office wall--contrasting with the much darker green on the rest of the wall--where the PRR calendar used to hang. They were personally delivered by the PRR sales rep; local freight agents were always a source of good information about forthcoming (and existing) freight movements for a sales rep looking for business. (The rep would then call on the shipper in town to ask for PRR to be included in the routing; if the traffic was routed by an office somewhere else, the rep would notify his counterpart there.)

by ExCon90
Fri Apr 19, 2019 2:53 pm
On the passenger side, I just spotted in the New York State Railfan forum a copy of a local newspaper from 1905 containing a display ad for the Michigan Central pushing their service via Niagara Falls and containing the statement "Your agent will have your ticket read via the Michigan Central if you tell him to." It worked the same way on the freight side.

by dave1905
Mon Nov 02, 2020 2:28 pm
I went out with a MoPac sales agent and he was delivering calendars. The Mopac had large poster size calendars that showed the whole year and they were preferred by the shipping dock and production people over the monthly calendar's because it was easier to mark and see production schedules etc over the course of a year.

by Minneapolitan
Mon Jun 07, 2021 12:07 pm
Another question has popped into my head that should probably be placed here:

What was the strategy in determining where a railroad would locate an off-line sales office outside of its "neighborhood"? It seems obvious to me that any railroad in the country wanted a team of sales reps in the usual places where the major interchanging action was - Chicago, Kansas City, St. Paul, Buffalo, St. Louis, Atlanta, Dallas, etc. It also seems obvious to me that railroads wanted an office to cultivate as much traffic as possible in cities that simply generate huge volumes, such as Detroit, Pittsburgh, New York, as well as major ports like Seattle, New Orleans, etc.

But beyond this, North America seemingly has no limit to the cities where a railroad could place sales offices. To use Erie-Lackawanna in the 1960's as a mere example, it only had thirty-nine. As explained above, some of these are no-brainers. Nor are smaller cities like Elmira, Jamestown, Marion, etc. They're making damn sure they collect as much freight as possible on their own line. 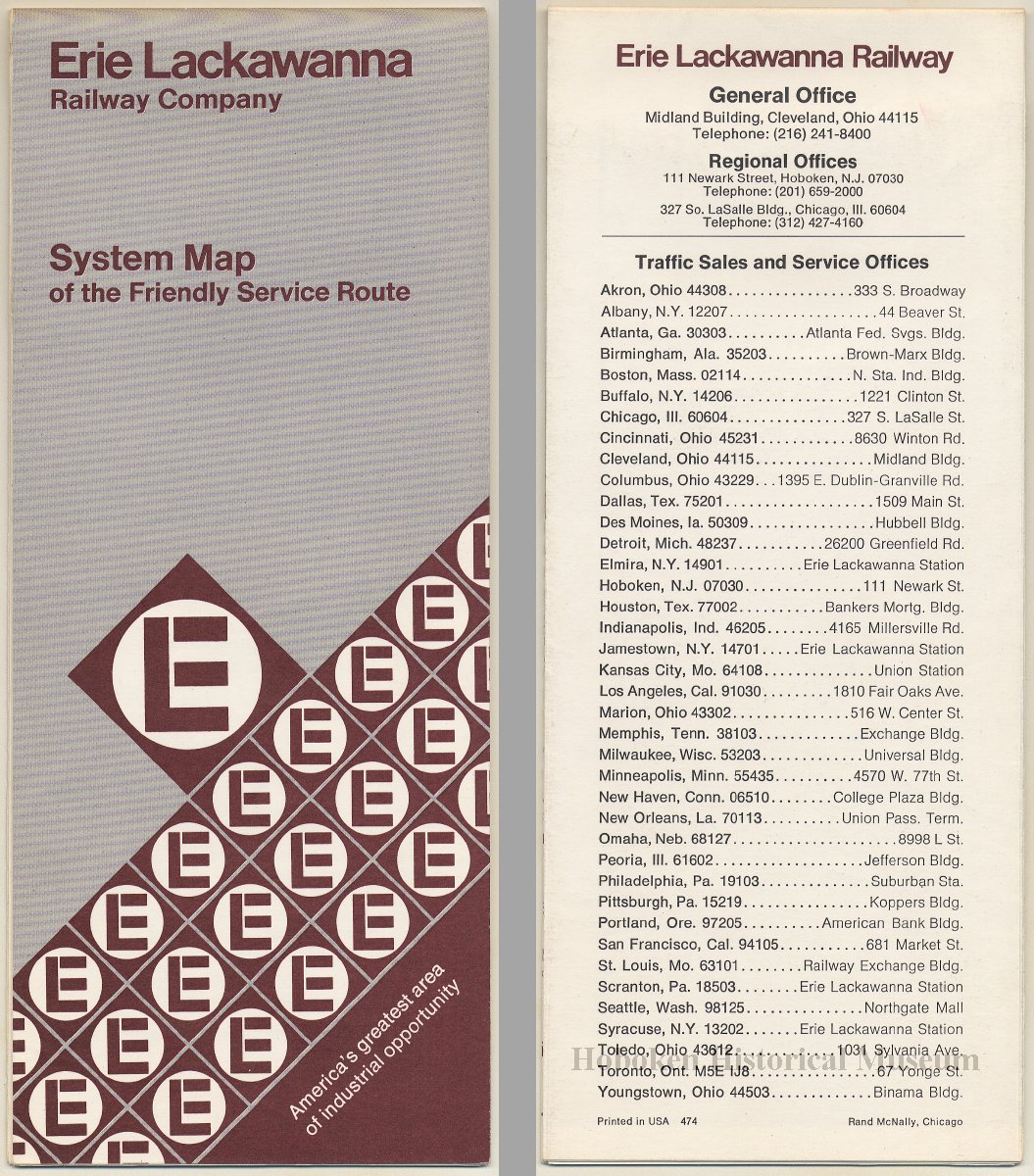 But then there's curious places like Des Moines, Birmingham, and Memphis. Why those? Why not Charlotte, Louisville, or Miami? Why not Montreal, Fresno, or Norfolk? If E-L is trying to capture lucrative transcontinental traffic (Central Valley produce for example), it would surely know that CB&Q will gain some of that through D&RGW at Denver with WP at Salt Lake City. Yet E-L has no sales offices in those two cities with sales reps knocking on those doors. Does an office in San Francisco really cover all that?

To be clear, I'm only using E-L in the 1960's as an example. My questions about sales office locations apply to any railroad.

Another important question also comes to mind: How did railroads approach the Canadian Wheat Board? Did any railroad hoping to capture American-bound wheat simply have a sales office at CWB's home in Winnipeg or would they want a few more locations scattered across western Canada in places like Regina, Edmonton, or Saskatoon?
Nickel Plate Road should have merged with ERIE.

by ExCon90
Mon Jun 07, 2021 11:06 pm
The interchange points didn't matter as much as places where major shippers had their headquarters. For example, Caterpillar alone made it necessary for railroads all over the country to have an office in Peoria*. There were also other considerations: back in steam days coal-hauling railroads wanted to participate in coal movements to other railroads -- a consistent move, the economy permitting. I started with the Pennsylvania in 1956 at their off-line sales office in Boston, located in the B&M office building at 150 Causeway St., not downtown like many other railroads, and learned that railroads seeking to handle B&M company coal were asked whether they had looked at the desirable office premises to let in the B&M office building. In addition to the PRR, other railroads having offices there were the Erie, DL&W, D&H, and N&W -- Southern and Western roads were mostly in commercial office buildings downtown. The Rutland and the shortlines owned by Sam Pinsly (e.g. Claremont & Concord) were also there -- good relations with the B&M were essential.

These off-line offices were the home base of sales representatives who were assigned individual territories in which they made personal visits to area shippers and local freight agents. The PRR office had a New England Sales Manager, Coal Sales Manager, office manager, rate clerk, trace clerk (that was me), statistician (who operated an IBM keypunch and a card sorter), a secretary, and seven sales reps covering MA, RI, NH, VT, and ME. Those covering the last three only came into the office every two weeks, on payday -- they spent the rest of their time in their territories and kept in touch with the office by U. S. Mail; long-distance telephone calls were charged for by the minute in those days.

I don't know about Canadian wheat, but I'm sure the EL's Toronto office was probably responsible for keeping up with it.

* This was back in the days of rotary dials and carbon paper, and dial 211 for the Long Distance Operator if you needed to place an out-of-town call; shippers attached importance to railroads that had a physical presence in or near their city.

by edbear
Wed Jun 09, 2021 1:12 pm
About Minneapolitan's comment about why not E-L sales offices in certain cities. There was not much business coming from those places. In the 1950s WP, L&N and GM&O did not have Boston offices. By the late 1950s, the L & NE Boston office was out of the rep's home in Randolph. In the 1960s the D&RGW and CofGA moved their Boston offices to their rep's homes. Indicative of how little traffic these roads were sending to this area. An interesting thing I found out when I worked in the B & M Disbursements Office in Boston was that major freight accounts had traffic departments. The specific one that involved me was General Electric in Lynn. Their traffic rep worked with railroads and trucking companies and maybe water carriers too. On Ex-Con's comment on the Pinsly roads being headquartered at 150 Causeway in Boston, B & M HQ. B & M did the revenue accounting for the Pinsly's for interline traffic, which was just about all of it. When the shortlines were spun off from the B & M, no rate divisions were changed which would probably have meant thousands of filings. Instead, the freight rates were existing B & M rates and the B & M settled with the Pinsly roads at an agreed upon formula.

by ExCon90
Wed Jun 09, 2021 10:18 pm
I've had second thoughts about the grain: by the 1950's export grain shipments no longer moved via New York, having been shifted (by the shippers, on grain originating in the US) to Philadelphia, Baltimore, and Norfolk, so the Erie would have been out of the picture. Domestic grain in those days was mostly shipped to Buffalo for milling, and flour was shipped from there.

by MACTRAXX
Thu Jun 10, 2021 8:46 pm
Minneapolitan: The Erie Lackawanna map that you posted is dated April 1974 - and may be one of the last
maps of the Erie Lackawanna system published before EL became part of Conrail two years later in April 1976.
On the bottom of the office listings note "Printed in USA 474 Rand McNally Chicago"

I worked on the NRHS National Library folded map collection while it was based in Philadelphia (closed back
in February 2008) and remember learning how to find the dating on these maps issued by various railroads.

This is an interesting subject about determination of rail routing used by shippers - some of the promotional
items that were given out by railroads over the years have become very collectible memorabilia.

*Offices showing two or more titled positions; New York had three. Each would have had a manager, a secretary, maybe one or more sales reps, and an office manager to handle phone calls when the manager and the others were out calling on shippers.