A general discussion about shortlines, industrials, and military railroads

by CBRy
Fri Oct 11, 2013 1:44 pm
Was looking at the area via Google Maps and see a lot of trackage on site.
But also remember reading somewhere that the Space Center deactivated
their railroad. Is there any active rail operations on site now? Do they still
have any motive power or rolling stock? I would think that a lot of hardware
there is too heavy and bulky for trucks so would need to be transported at
the site via rail. What say you all? Thanks.

PS...Google Maps Satellite mode is great for doing "fly-overs" and zooming
in on things!

by RailVet
Fri Oct 11, 2013 6:46 pm
The USAF rail operation at Cape Canaveral Air Force Station was shut down some years ago. One of its three SW8s was put on display and the other two were shipped to Hill AFB, UT. That base's rail operation shut down a couple of years ago (although the rail shop, a separate tenant Army activity, is still in operation) and later the two locomotives were repainted into Army colors and shipped to Blue Grass Army Depot, KY.

Recently I read somewhere that the NASA rail operation (separate from the Cape Canaveral AFS rail operation) will shut down in a couple of months. Might be temporary but could become permanent. I'll post further details if I can locate that information again.

by CBRy
Fri Oct 11, 2013 7:47 pm
Shame. Efficient, dependable and capable method of moving heavy things there.
And the Gov't in its "wisdom" will shut it down and use rubber-tired trucks that
will be under-powered and limited in what they can move. I notice that there is
an extensive rail network still in place there. NASA would be wise to keep their
rail capability.


USA: Canaveral Port Authority has announced its intention to apply to the Surface Transportation Board for powers to build and operate a rail link between its port on Atlantic and the Florida East Coast Railway near Titusville, Florida. This would eliminate the need for road haulage between the port and a suitable railhead.

Please, Scroll down to the third (3rd) Photograph, and tell me What kind of Locomotives they are using?

by RailVet
Tue Jan 20, 2015 6:48 pm
It's hard to say for certain, but judging by the sixth photo, it looks like some sort of trackmobile.

by Jeff Wagoner
Thu May 11, 2017 12:26 pm
One of their switchers has ended up in southeastern Indiana on the Madison Railroad in North Vernon: 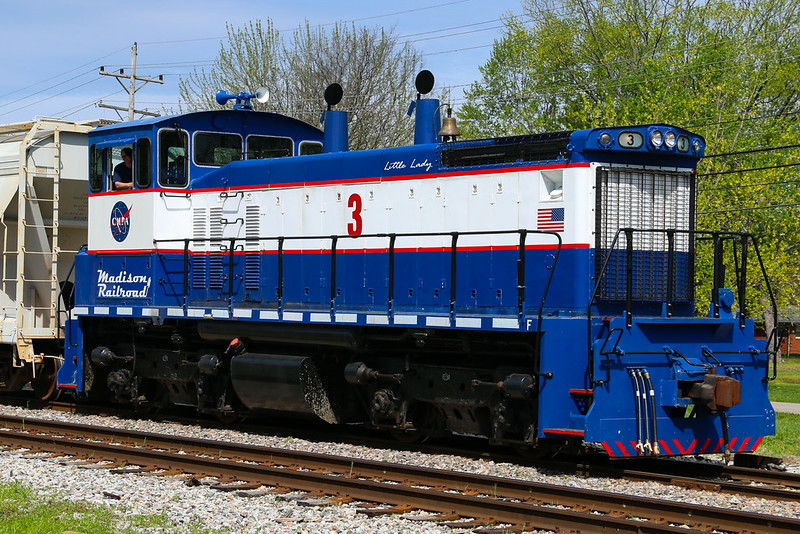