by scoostraw
Tue Jul 15, 2014 2:35 pm
There is a slide on eBay at the moment showing this scene. Do any of you guys recall the circumstances? Supposedly was in 1972. 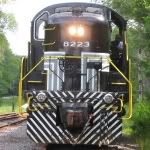 by Noel Weaver
Tue Jul 15, 2014 4:03 pm
From the slide it appears that the train might have derailed and went in to the signal bridge causing this to happen. I do not recall this incident but maybe SHL will, he has an excellent memory.
Noel Weaver

by scoostraw
Tue Jul 15, 2014 8:28 pm
You may be right Noel that the train derailed and took down the signal bridge. Actually it makes more sense that way.

charlie6017 wrote:Definitely looks derailed......from rear of second car and onward. If you zoom-in (press CTRL and the + sign),
you'll see in more detail.

Oh yes. No question that it's derailed. When I first looked at it though for some reason it popped into my mind that the signal bridge had collapsed onto the train and caused the derailment.

The train being derailed first and then fouling the signal bridge makes more sense tho.

The signal bridge that collapsed was just west of MO in the Bronx. That is Concourse Village in the left background, once part of NYC's Mott Haven yard. The derailment took place on October 10, 1973. That's a Harlem Line train from Brewster, No. 912 I think, a six-car train due at GCT about 7:40 AM. The third car from the head end derailed and that was what took down the signal bridge. Only minor injuries except to that morning's Harlem-NH rush hour (which was fatally injured).

The reason I'm familiar with this is, we discussed it here -- or on one of these groups previously. It was one of the last times the old bi-directional GCT wrecker was called out. There's a great photo of the wrecker in action at that site on Pierce Haviland's Penn Central Online website. Here's a link, you have to scroll down to see the MO photo. Here's a link to just the photo.

I believe someone said -- or I read it in an archived news story -- that after the dust settled, they crammed all the riders in the head coach and proceeded to GCT.

Interesting that they were able to apparently get all passengers into one coach! Wow..