(AUS) Out and about in Melbourne.

Tell us where you were and what you saw!

(AUS) Out and about in Melbourne.

by Pakenhamtrain
Tue Dec 08, 2020 6:46 am
G'day all.
With most restrictions finally lifted I wasn't trapped to just 25km and have been out and about regularly capturing some of the regular and some of the soon to be gone from our rail network.
First up we begin from 14/11. 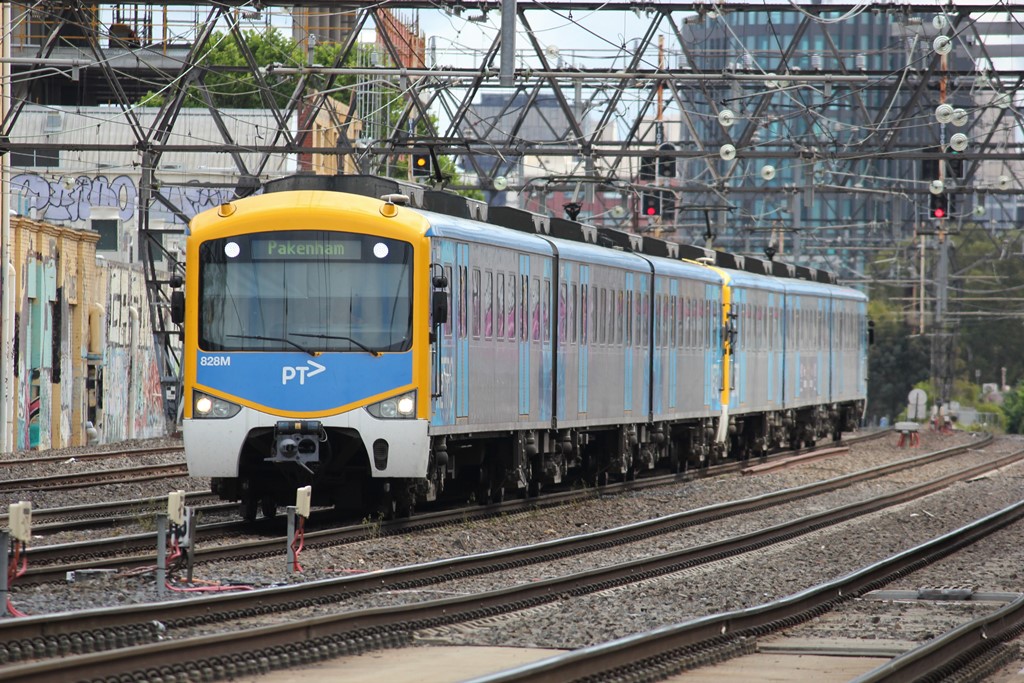 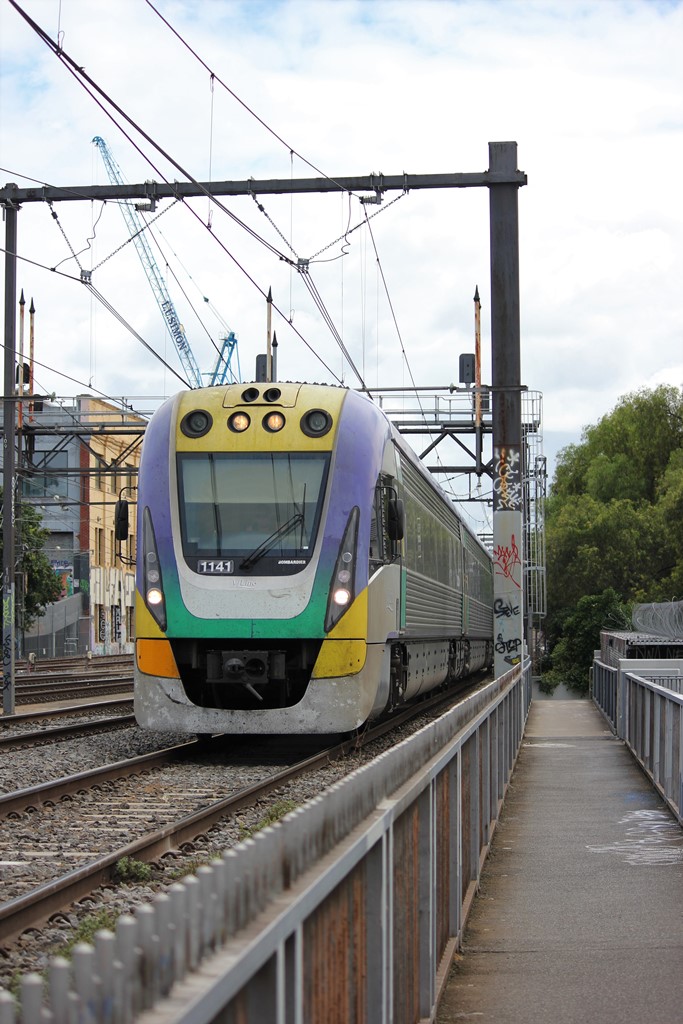 Not long after on the Caulfield local is Vlocity VL41 on the down with a Traralgon train between Richmond and South Yarra. VL41 is one of few still in it's original livery. 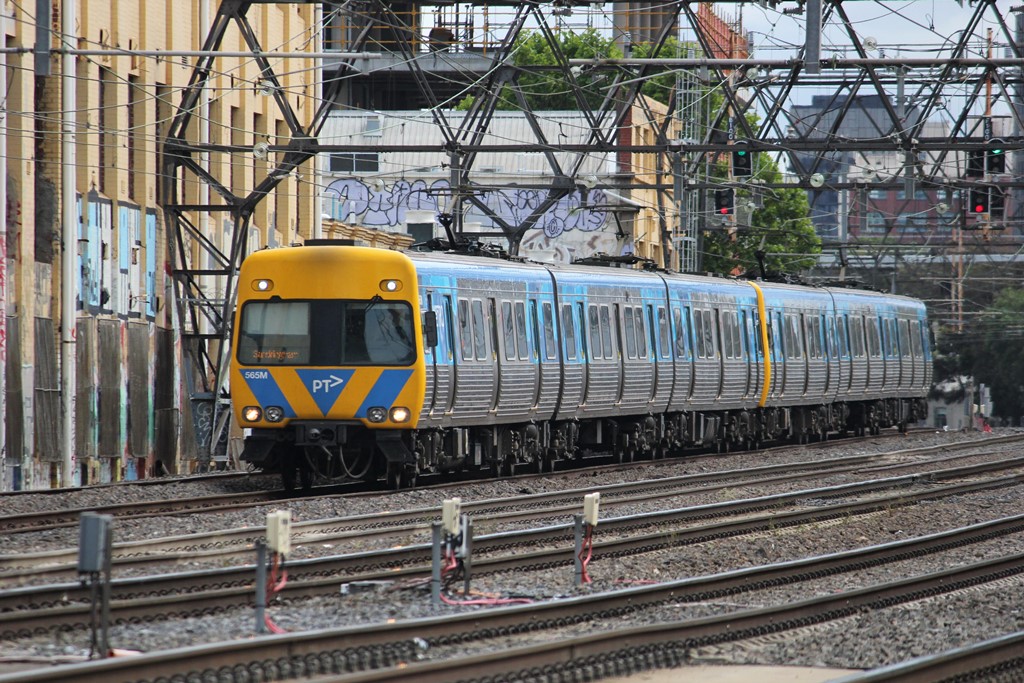 On the down Sandringham line a 6 car Alstom refurb Comeng lead by 565M is between Richmond and South Yarra with a Sandringham train. 565M-1131T-561M-M-T-M is another of the disk braked units that have been through the CCTV and digital display upgrade as evidenced by the large headboard in the offside window. 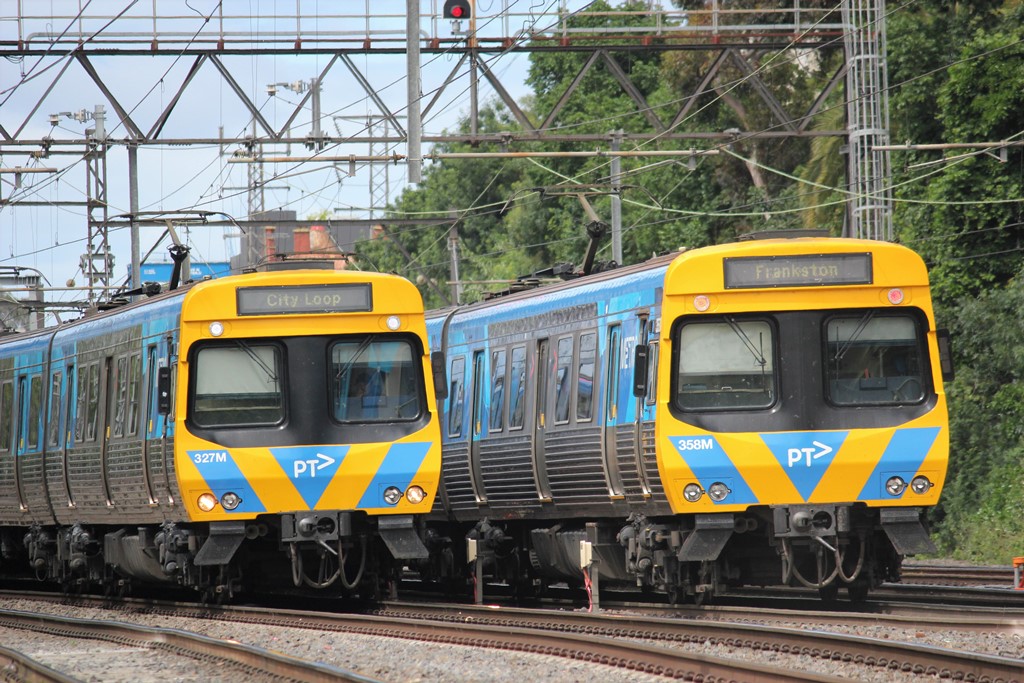 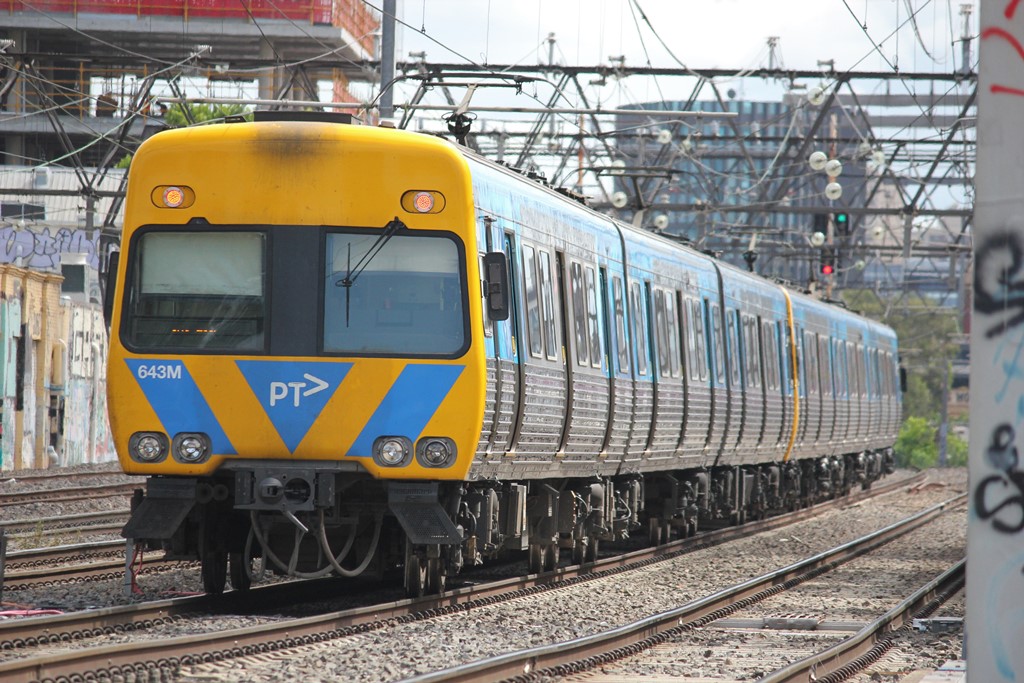 Alstom Refurb 643M takes up the rear. Mixed tread/disk sets like this will become extinct once the disk braked units recive the CCTV/digital display upgrade. 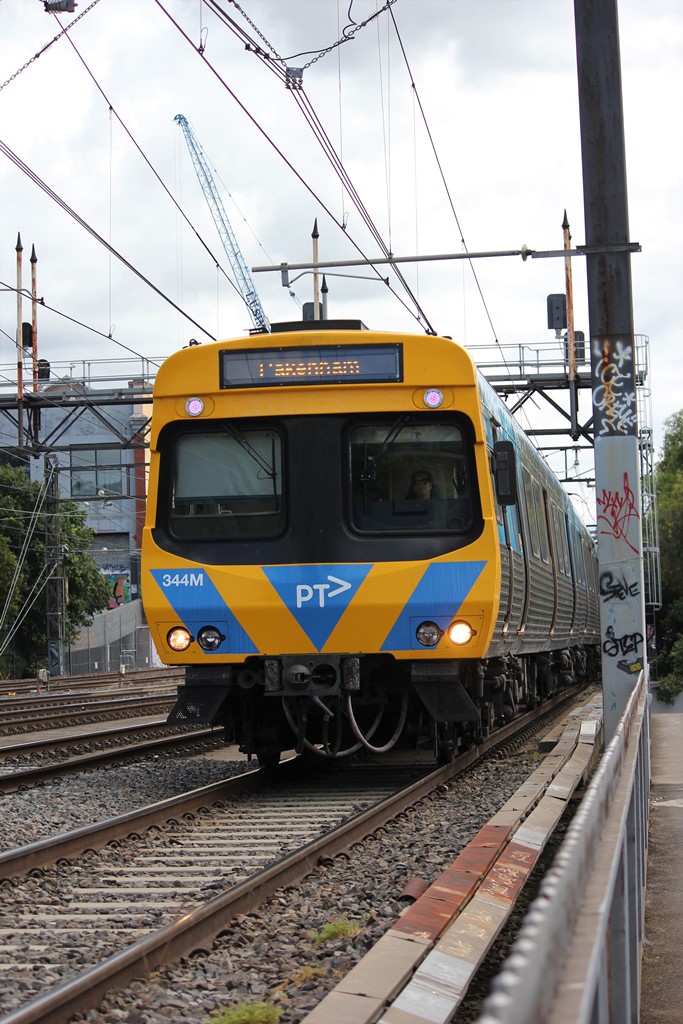 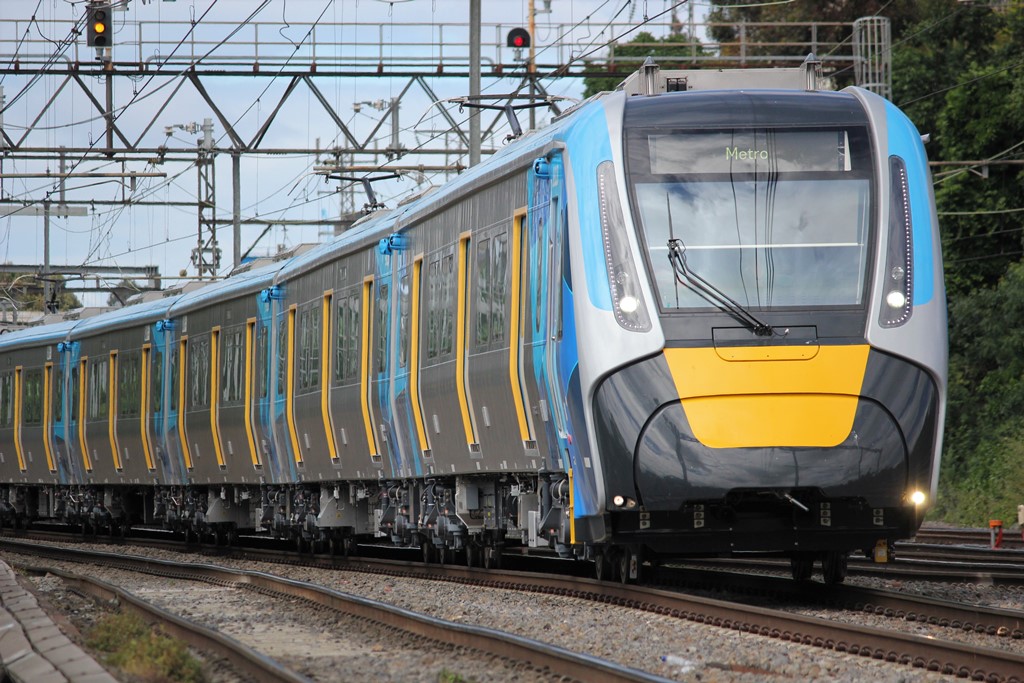 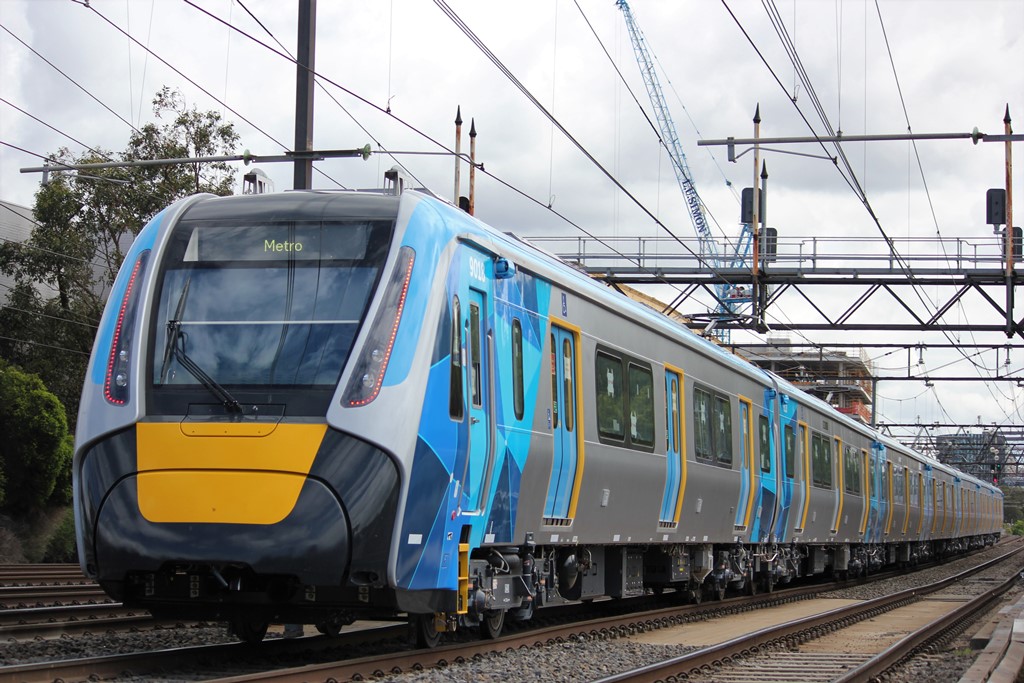 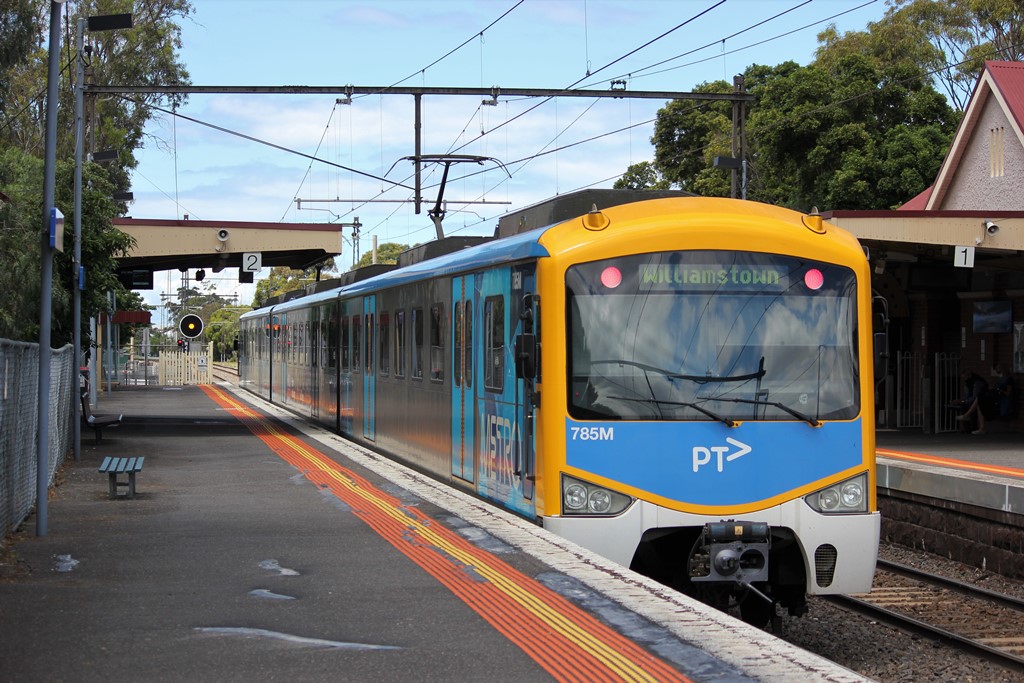 Now we cross to the other side of the city at North Williamstown where we see 3 car Siemens 786M-2543M-785M on the down with a WIlliamstown train. With the new timetable on the 31st of January the 3 car weekend Williamstown-Newport shuttle will become a thing of the past. All trains from Williamstown will be extended from Newport to run into the city and run as 6 car trains like on weekdays. 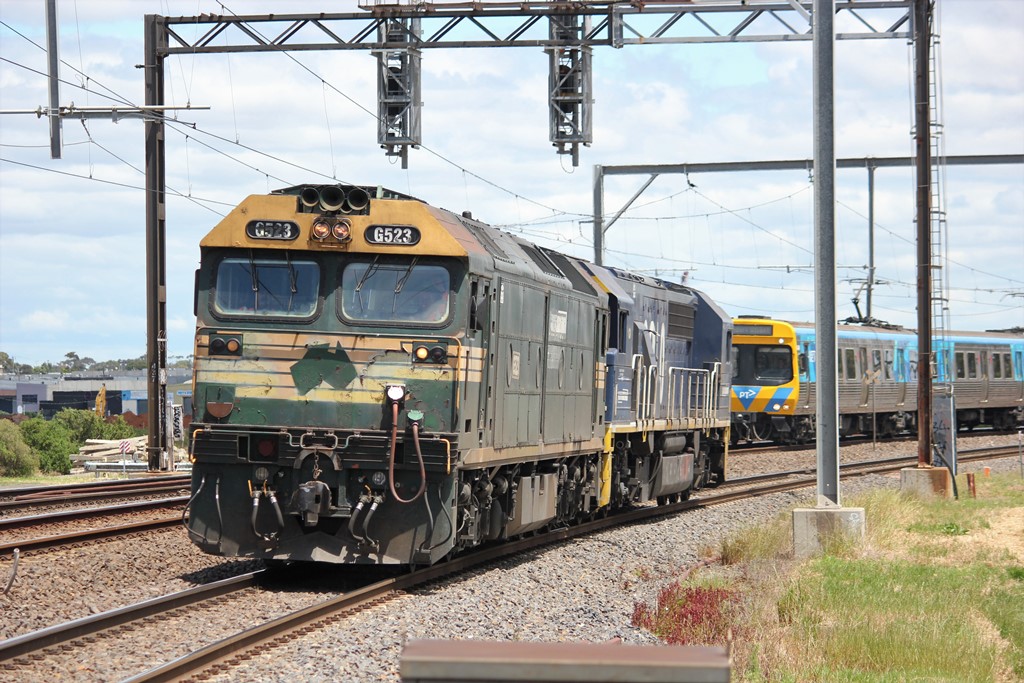 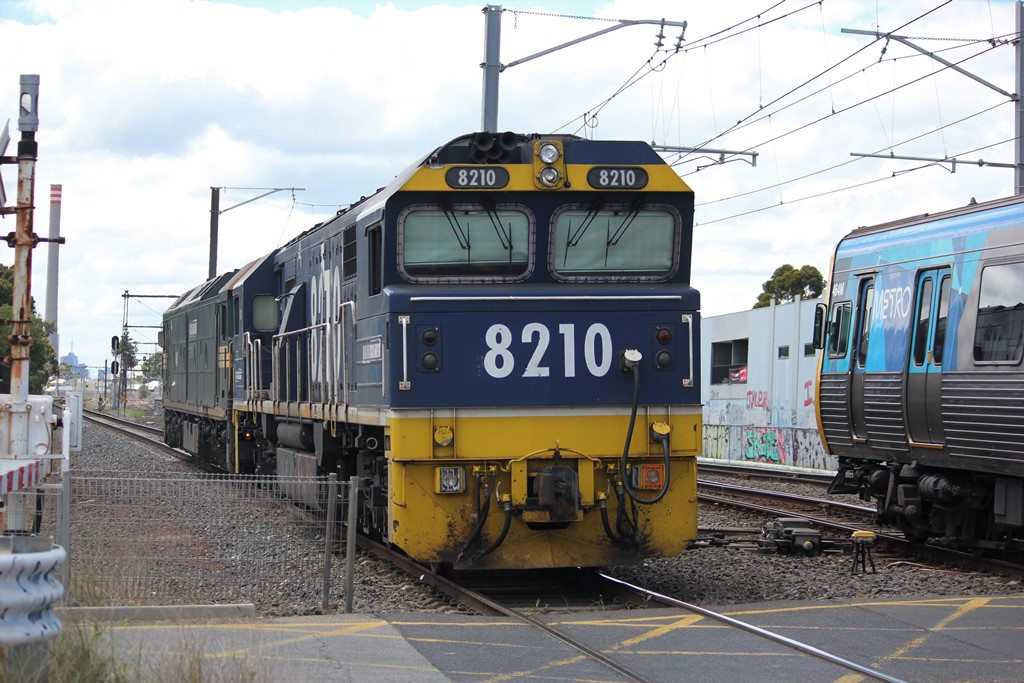 At the Champion Road crossing at Newport Pacific National standard gauge locos G523 and 8210 with light engine move D770V. Between Newport and Geelong the broad gauge and standard gauge lines parallel each other. This bit of track is part of the western SG that takes trains to Adelaide and beyond.
PN doesn't seem to be in too much of a rush to repaint thier locomotives. G523 is still wearing it's Freight Australia livery while 8210 is wearing it's Freightcorp livery.
Now we move onto 21/11 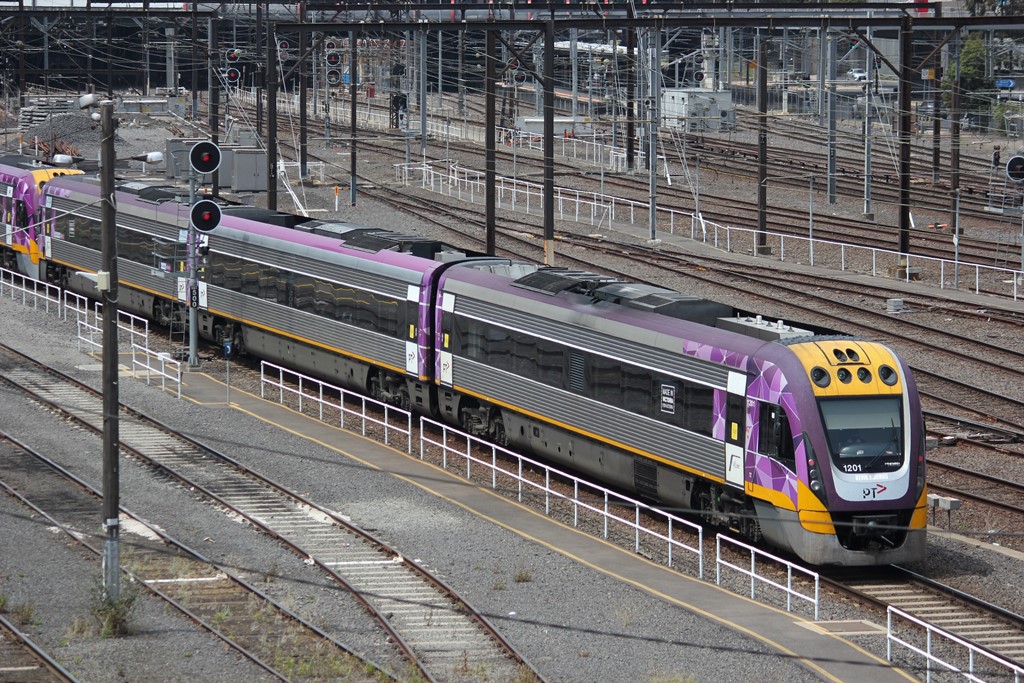 Arriving on the up into Southern Cross from Wendouree is VLocity VL25 and VL01. 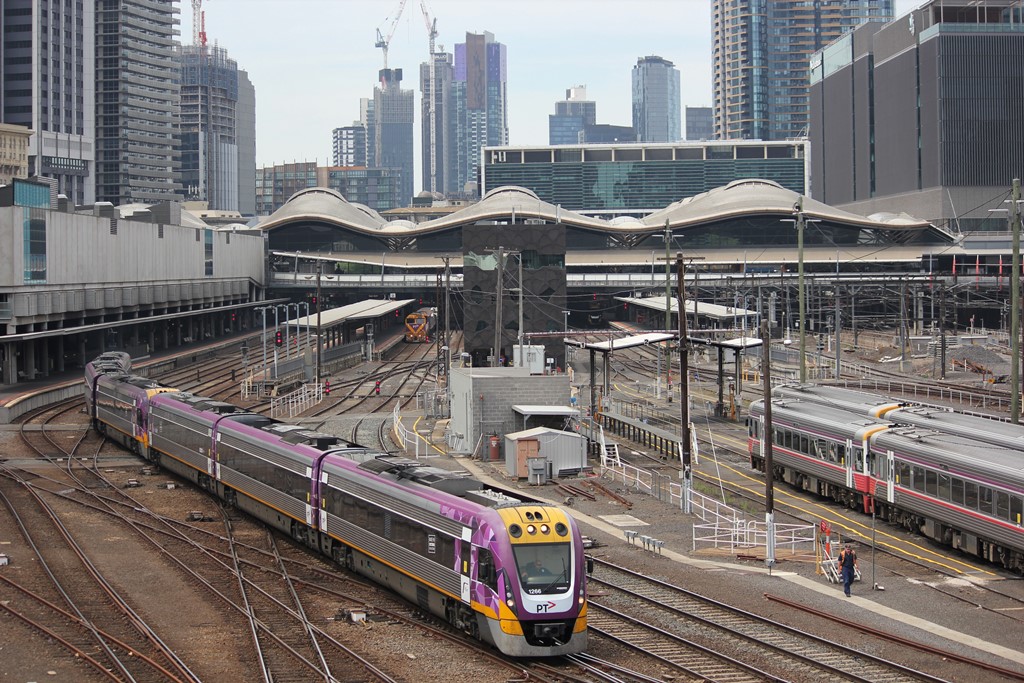 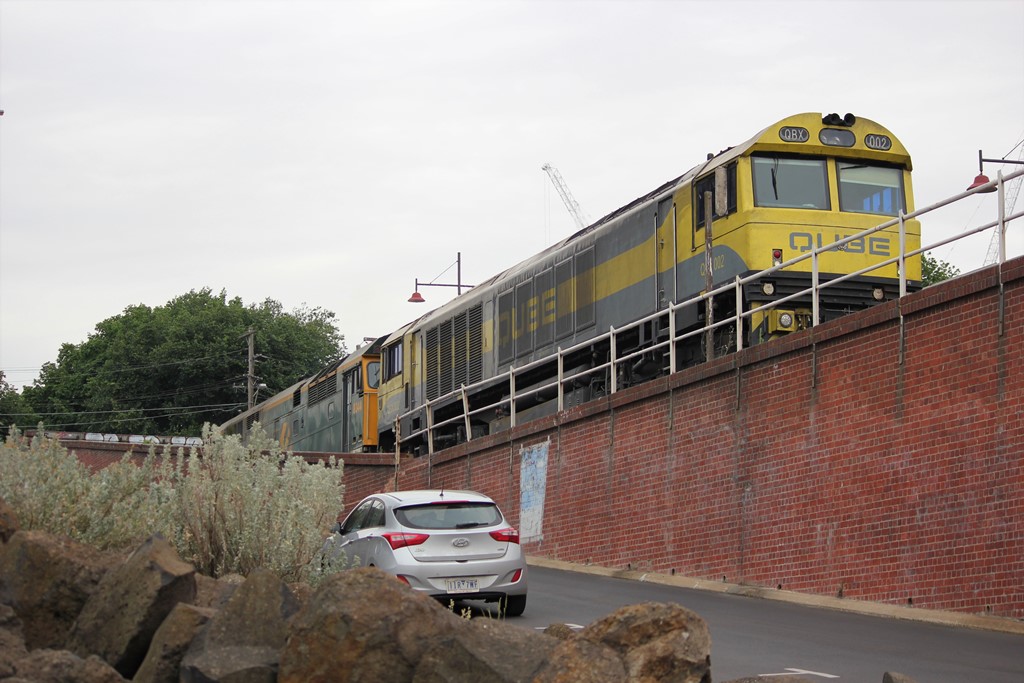 Moving out to Footscray we see Qube's QBX002 and 8044 come out of the Bunbury Street tunnel and stop at signal DYN160 on a light engine move to Victoria Dock to run the 7MC7 cement. 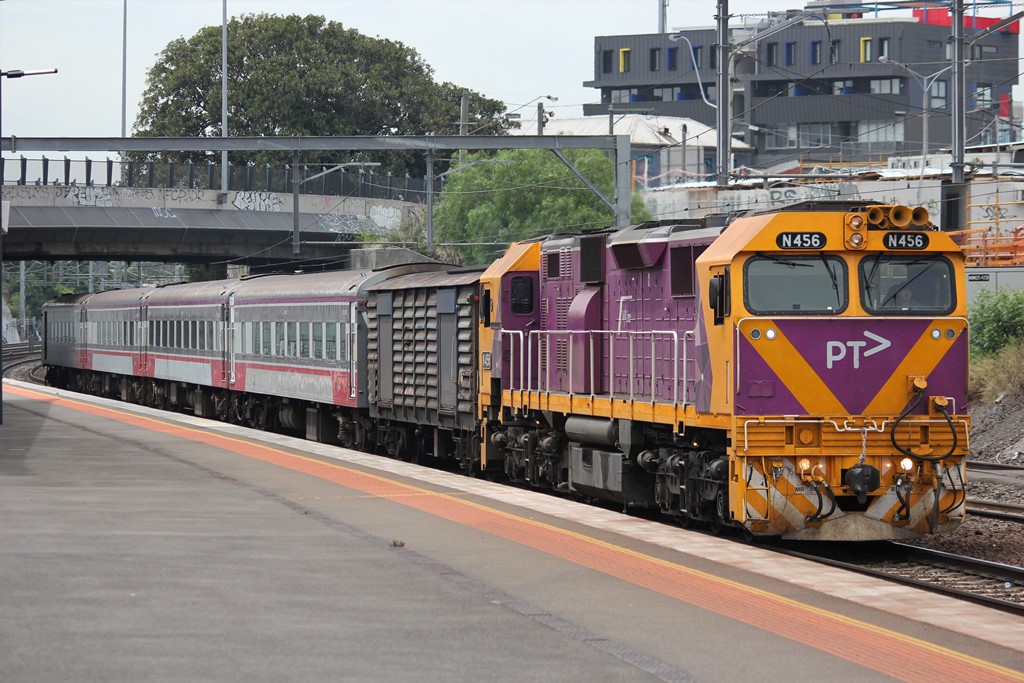 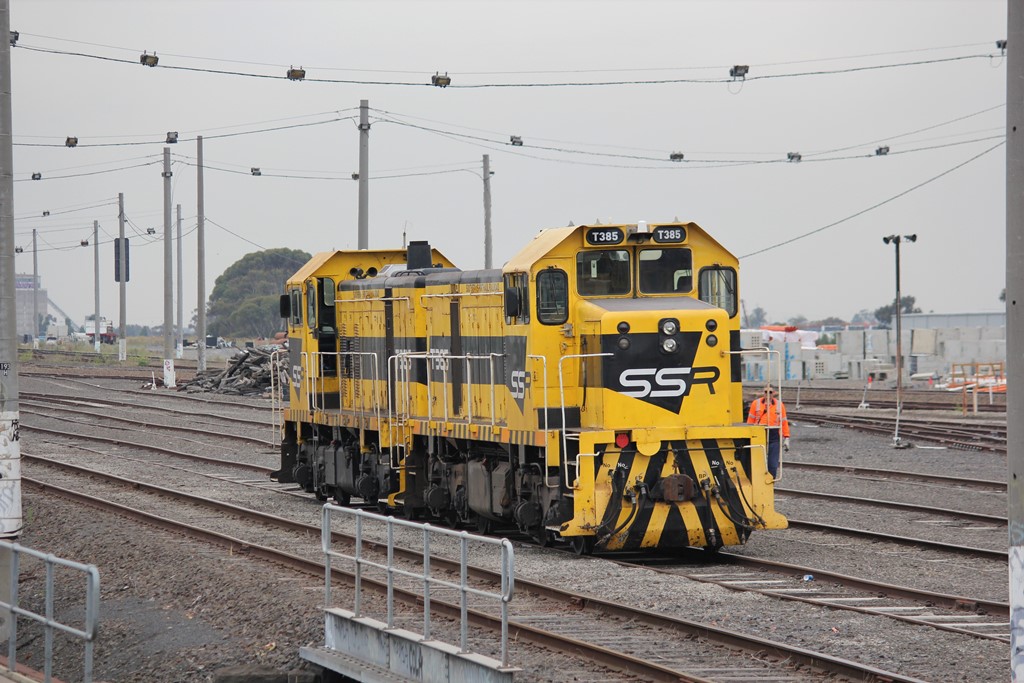 With thier day done SSR's T386-T385 have uncoupled from the consist and wait for the Ps shunt the train into another siding at Tottenham Yard. 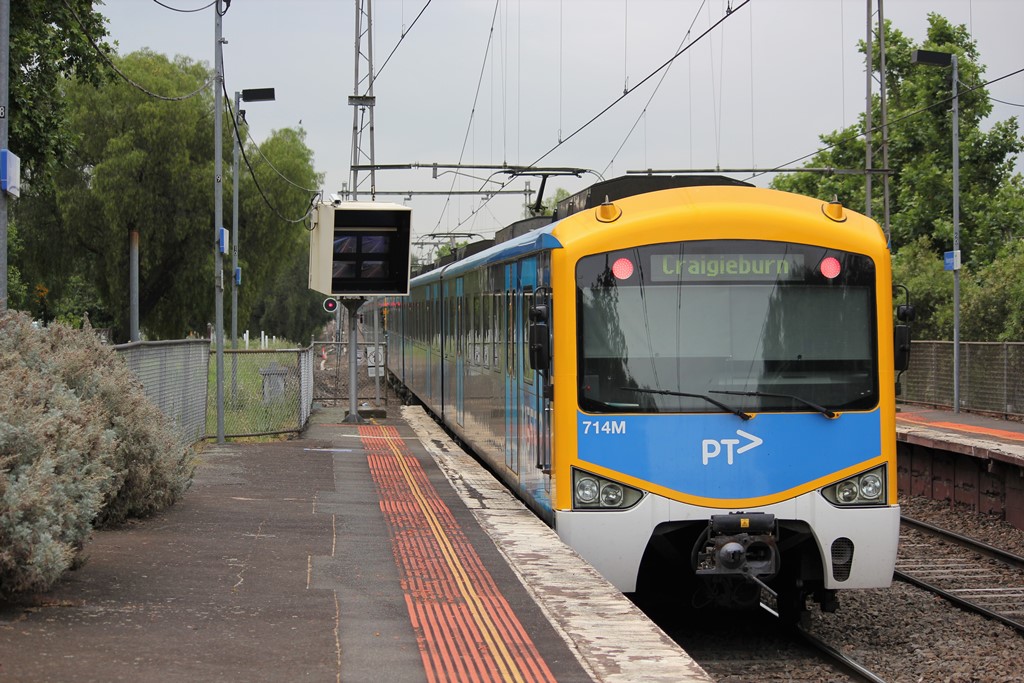 Moving to the northern suburbs Siemens 714M trails a Cragieburn train at Kensington. 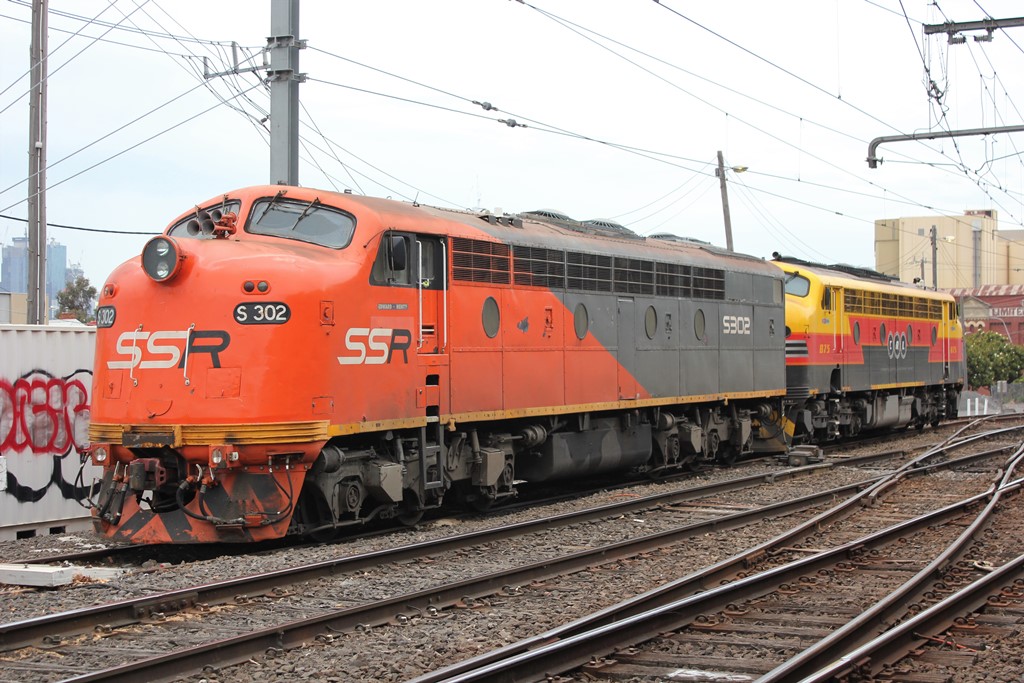 Still earning thier keep some 60 plus years of service S302 and B75 are stabled at B siding of the Kensington flower mill awaiting thier next run to collect grain.
S302 is still wearing it's El Zorro livery while B75 is wearing the livery of SSR subsidiary Consolidated Rail Leasing. 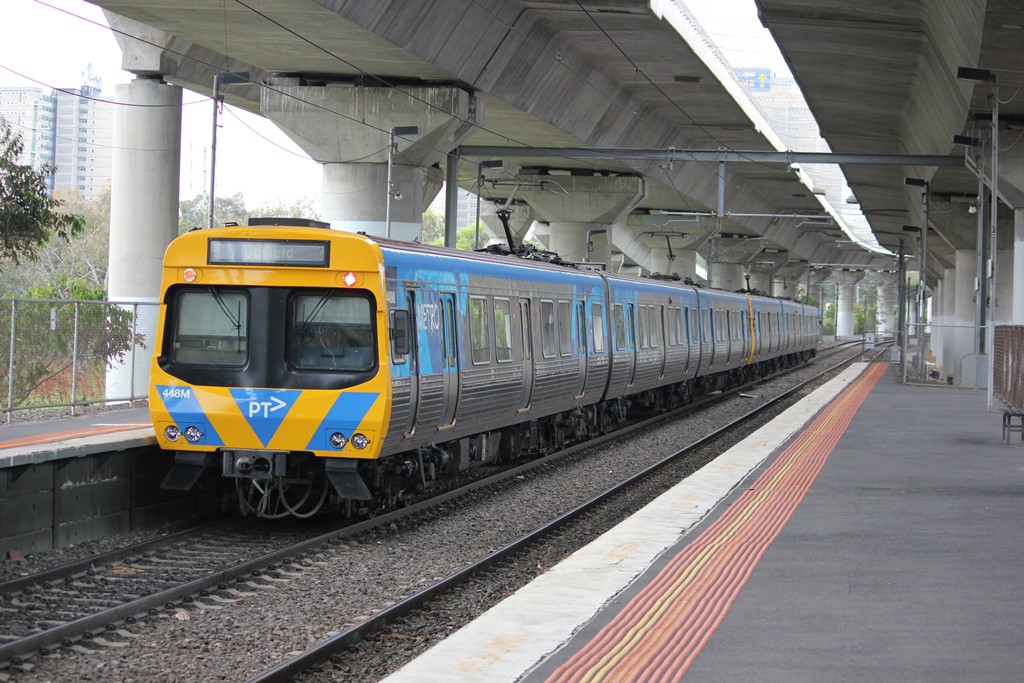 Departing what can only be described as Melbourne's most dreary station EDI refurb Comeng 448M is on the rear of a Upfield train at Macaulay. In the late 90s Citylink was built on top of the station.
Moving on to the 5/12. 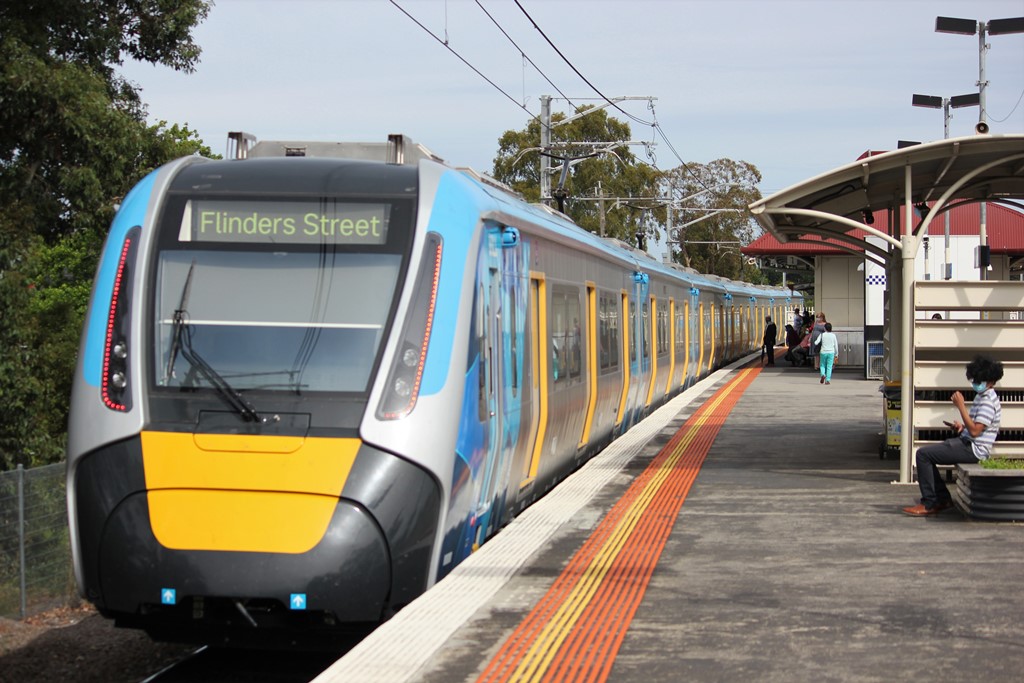 In one of those right place right time moments is HCMT unit 11 departing Narre Warren on the up after doing a simulated stop as part of the Simulated Passenger Service part of testing. Like the RGR part of testing 2000km has to be completed fault free. SPS as the name suggests is set the train up as if it's running a normal service including station stops.
The first one is expected to enter service with the new timetable but it has been rumored one will run in a couple of weeks as a propaganda exercise. 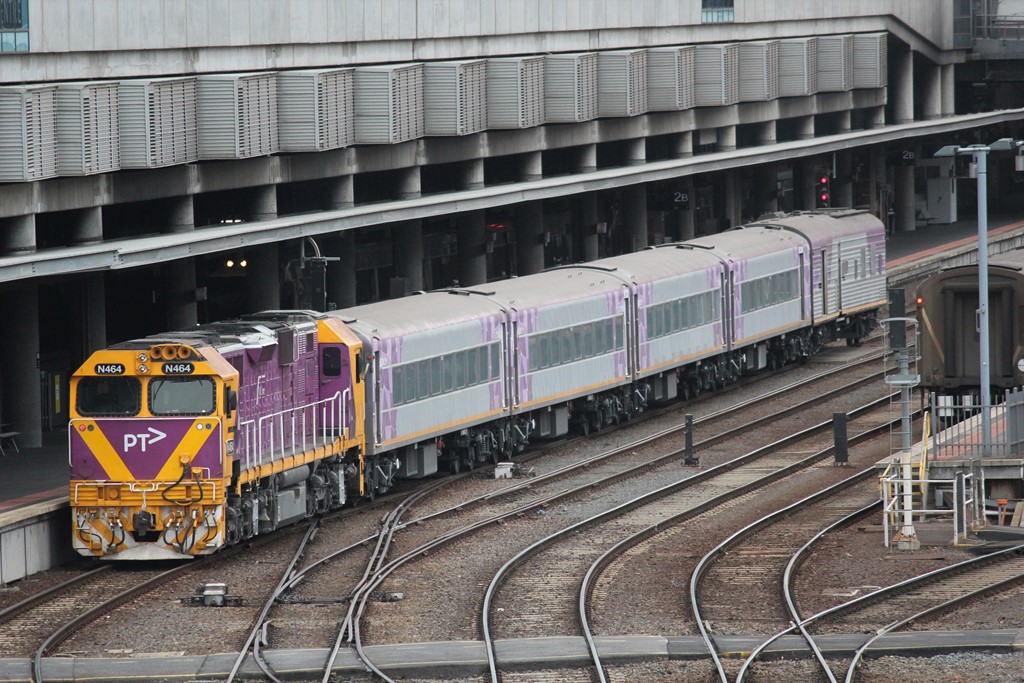 With borders finally re opening interstate trains are starting to resume. N464 and N set SN16 are at Southern Cross awaiting departure on the 1205 to Albury.
On the back is power van PCJ492. Unlike the broad gauge power vans where they are used as required, the PCJ and PZ power vans are always attached to an SN set HEP working or not. 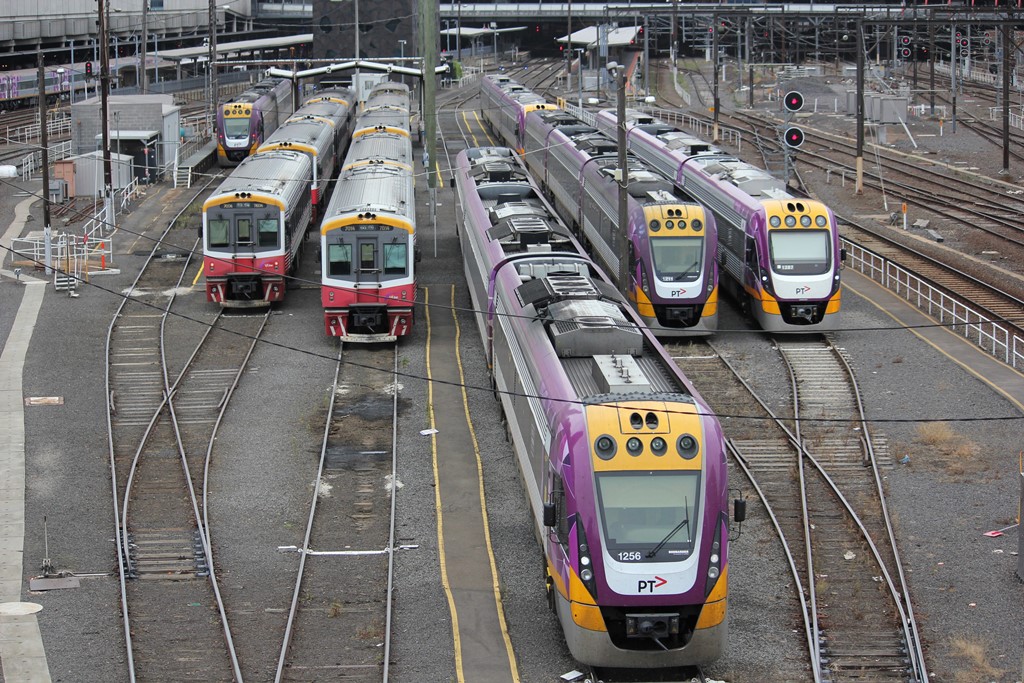 The railmotor yard this week is much more crowded with a couple of Vlocities and Sprinters. Of note is one of the new Vlocity units on the right. 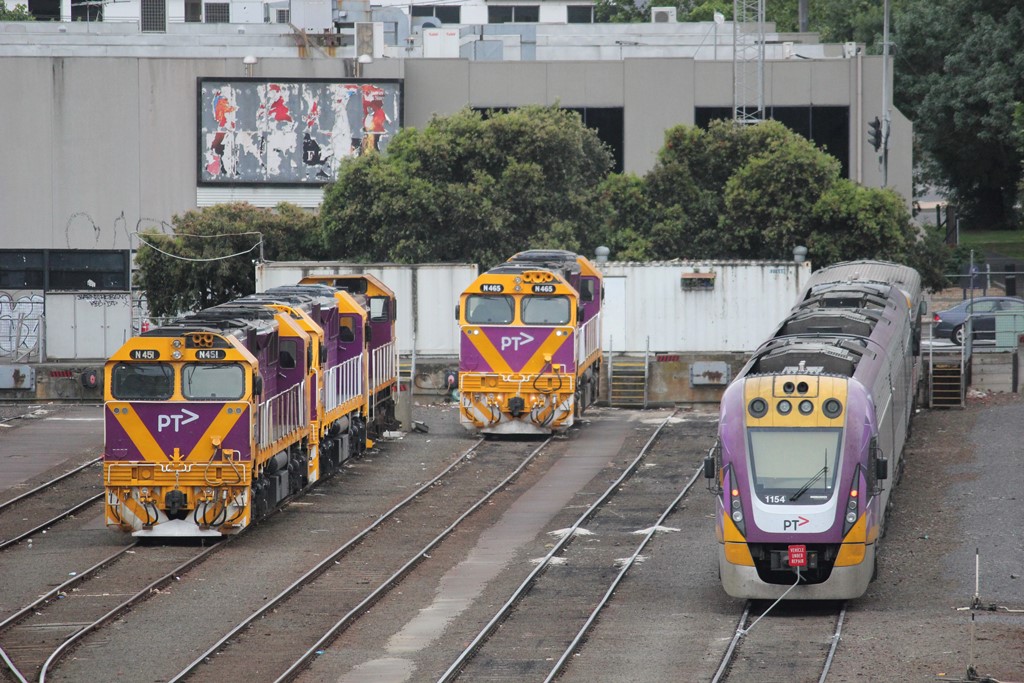 Over in the Bank sidings are a bunch of N class locomotives, a Vlocity and a Sprinter awaiting thier next turn of duty. 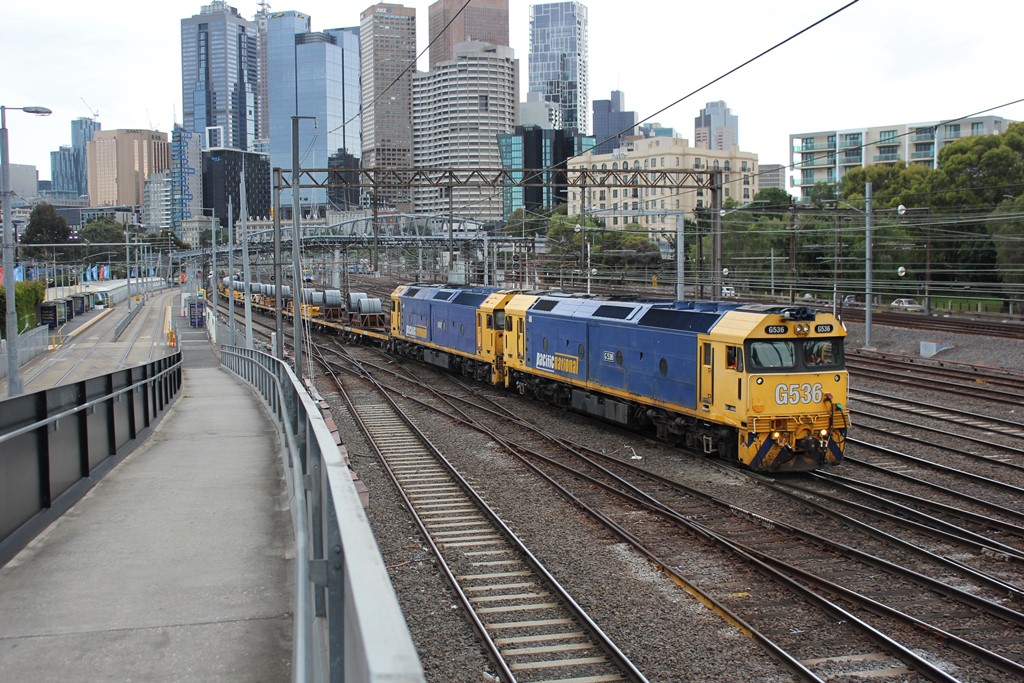 Finding freight trains can be a bit of a challenge but there are a couple that run to regular schedules. Here G536-G527 clatter over Richmond Junction with the 9553 down Long Island steel. This train takes steel unloaded off a standard gauge train in Dynon to the Bluescope Steel plant at Long Island in Hastings. 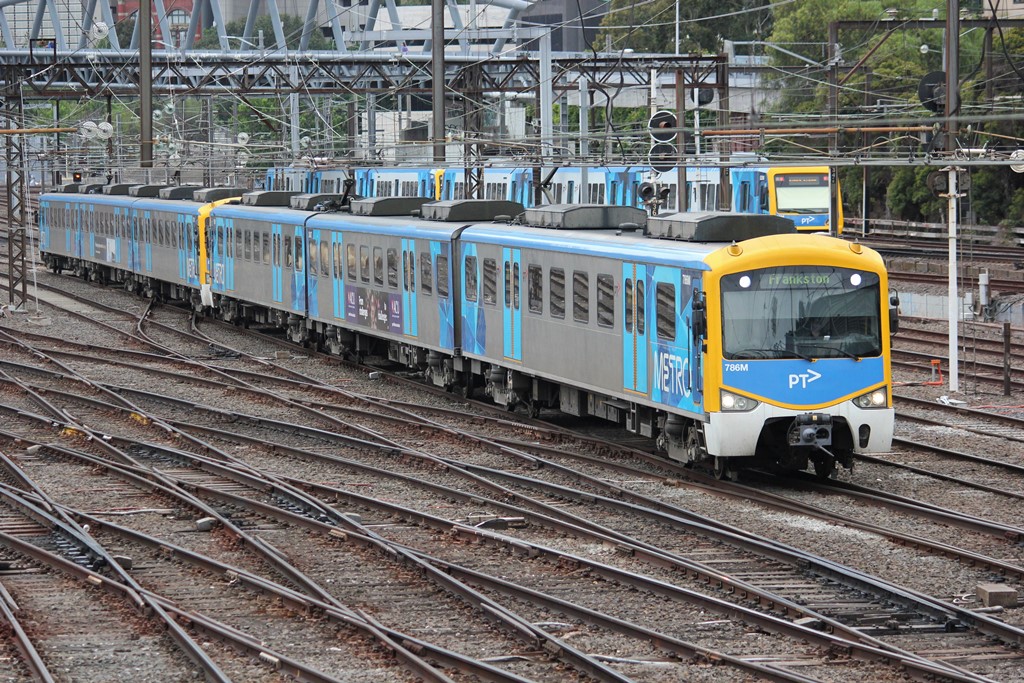 With the steelie out of the way Siemens 786M gets back on the move with a Frankston train. In the background is an X'trapolis heading to Flinders Street. 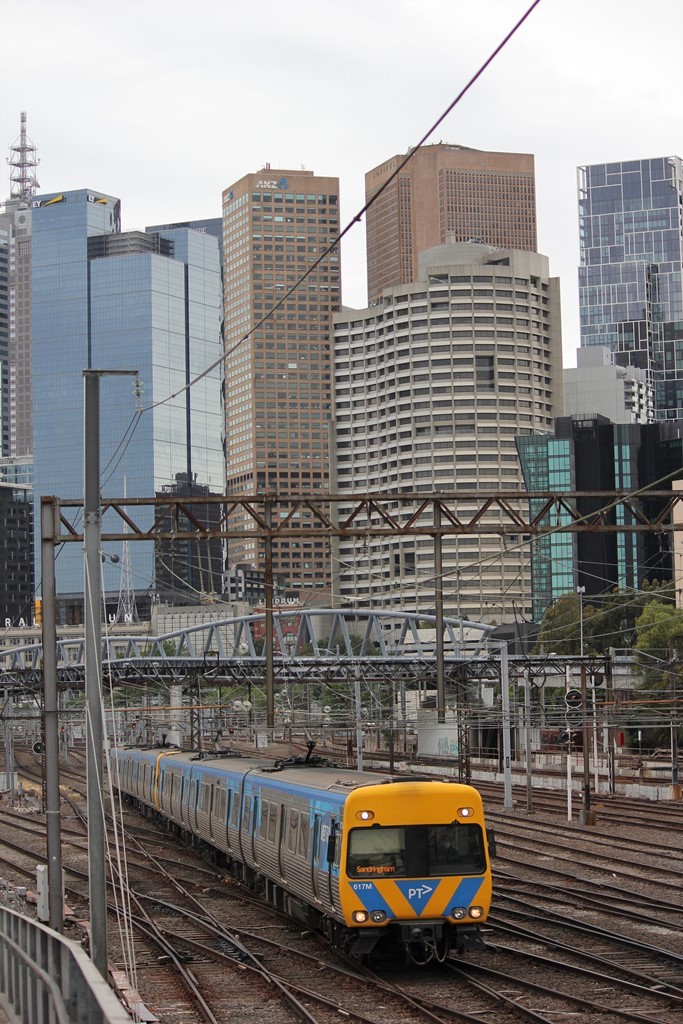 With the part of the city skyline behind Alstom refurb Comeng 617M leads a Sandringham train. 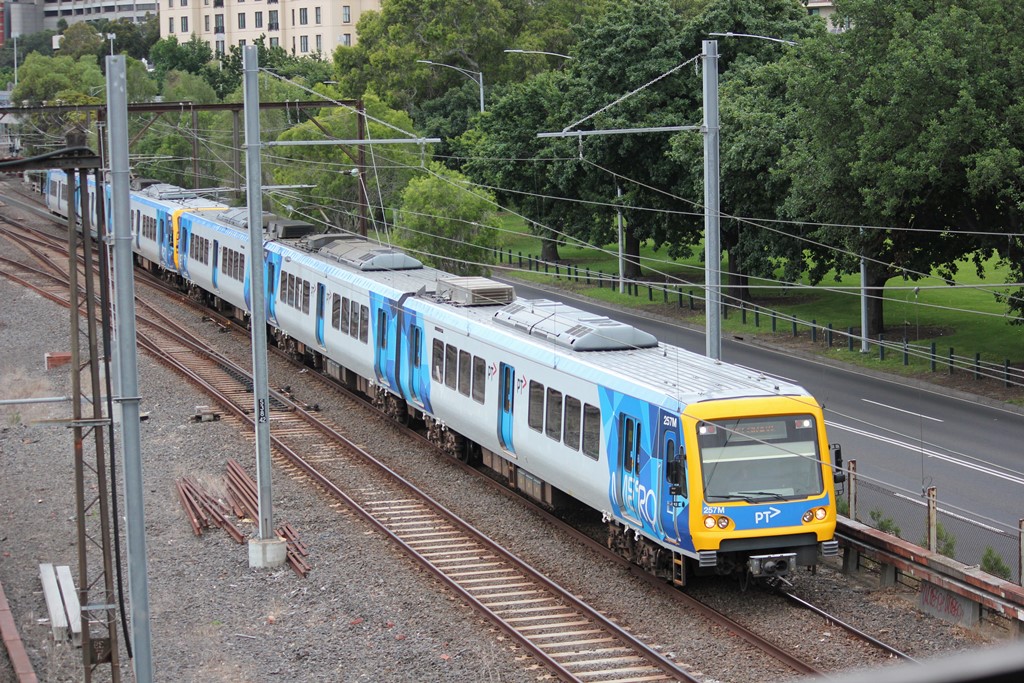 On any other weekend X'trapolis 257M would leading it's Belgrave train coming off off those points from the left but due to works on the viaduct between Flinders Street and Southern Cross all Burnley Group trains were running direct to and from Flinders Street. 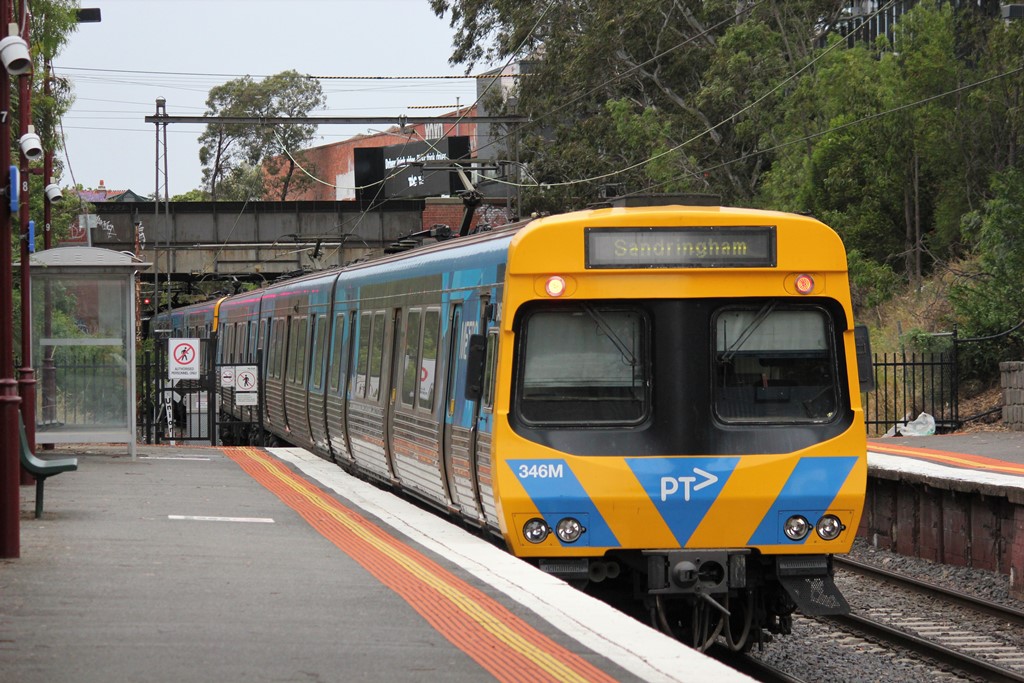 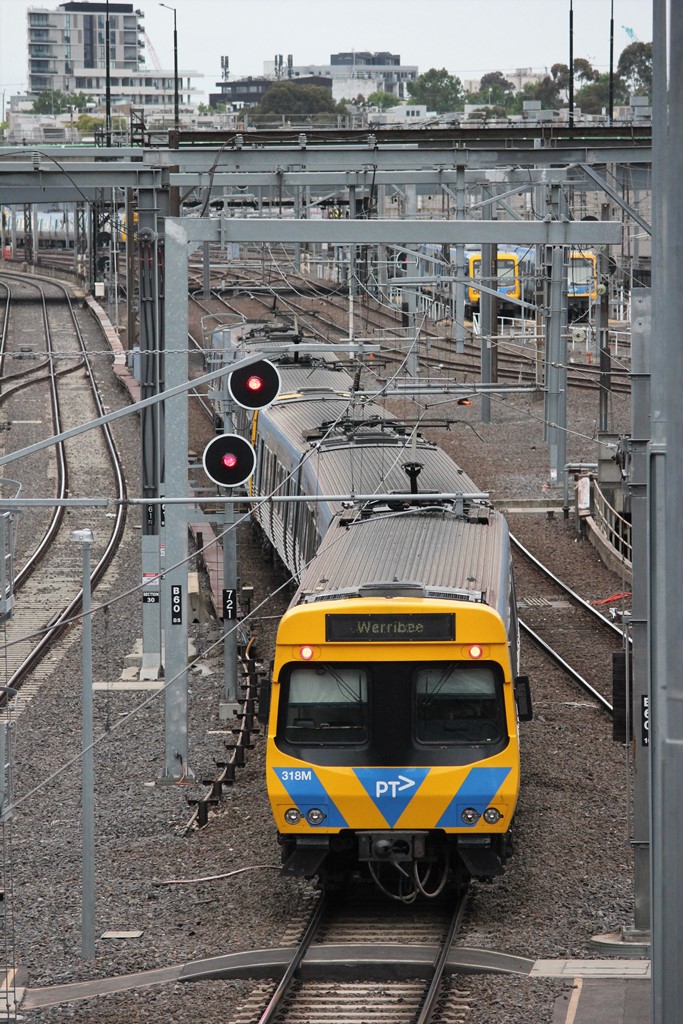 With a delay in the Northern group tunnel in the City Loop Metrol made the deicion to run trains direct to/from Flinders Street. As a result some trains like this Werribee train trailed by EDI refurb 318M ended up using Platform 14 at Southern Cross. A move that will become the norm on weekends with the Jan 31 timetable taking Werribee trains out of the loop and through running them with Fraknston trains like on a weekday.

by NaugyRR
Tue Dec 08, 2020 4:16 pm
Thanks for the awesome photo essay! It's always fascinating to see the huge variety of equipment Australia has to offer and you capture that diversity quite well. Can't wait for the next round!
"That sapling that once grew just south of Wassaic may be long gone, and the Harlem Line’s appearance may have changed over the years, but for decades to come, I can count on it continuing to provide me with funny recollections"

by RRspatch
Wed Dec 09, 2020 2:39 am
Thanks for the pictures from down under. While I do follow the Aussie rail scene discussion at Railpage Australia there generally isn't a lot of pictures posted to the forums.
Then it comes to be that the soothing light at the end of your tunnel
Is just a freight train coming your way


We begin on the Cragieburn line where EDI refurb Comeng 473M is on the rear of a City Loop train at Pascoe Vale.

Coming off hire from QUBE bound for home at the Seymour Rail Heritage Centre(SRHC) is preserved locomotives X31 and S303 wearing the classic Victorian Railways blue and gold livery. It's not an uncommon sight to see mainline heritage groups hire out thier locomotives to operators. It's a means to make a dollar or two for the group and given covid smashed mainline heritage trains in 2020 it's welcome money.

The holsters cab end of S303. Only used for shunting and moving around short distances.

A 6 car Siemens clatters over the pointwork of Richmond Junction with a down Cranbourne.

Alstom refurb Comeng 647M leads an up Sandringham service over Richmond Junction. In the background preparations are underway for the Australian Open tennis.

A 6 car Alstom refurb with DTI mods crosses over to the down Caulfield through line with a down Frankston.

A 6 car EDI refurb Comeng nears the end of it's journey on an up Pakenham or Cranbourne train. A scene like this on a weekday is now rare with the timetable change keeping the Caulfield Loop in one direction. Only the Northern and Burnley Loops still change direction in the middle of a weekday.

Another one of the more reliable freight trains is the 9475/9476 Maryvale Paper Train operated by QUBE. Taking paper from the mill near Morwell to the docks in the city. Here 9476 is being lead by regular VL class locomotives VL356 and VL360.
356 and 360 are leased locomotives from Chicago Freight Car Leasing Australia (CFCLA) and wear thier striking sliver blue and yellow livery.
CFCLA tend to name thier locomotives after Australian racehorses. 356 is named Gatum Gatum and 360 Gurner’s Lane.

With Victoria using the american style speed signalling there often isn't a means to tell trains which direction they're actually going. In some cases theatre indicators, feathers or illuminated arrows are used. In this case however MYD987 has a couple of arrows slapped on the target board. Cheap yet effective.
In this case a normal speed aspect indicates a right hand move along the regional rail link.
A medium speed aspect indicates a left move towards Dynon.
Below the main signal heads is an illuminated V. This along with the S next to are used in dual gauge areas. The V indicated the signal is cleared for a broad gauge train. If the S was illuminated it would indicate the signal is cleared for a standard gauge train.

Nearing it's final destination is N468 and H sets LH32 and an SH set with the up Shepperton.
The H sets are commuter carriages converted from former Harris EMUs mainly used on short distance commuter runs but can end up on long distance trains like Shepperton and Warnambool if there isn't a N set available.
Of note LH32 set made up of the prototype 75ft cars built in 1970 hence the LH set code. These cars were prototypes for the next EMU order. In the 80s they were converted into the H type cars.
The 3 cars behind are the standard 63ft length car hence the SH code.

VLocity VL38 nears the end of its journey as it heads down the hill towards Southern Cross.

Powering up the hill towards the North Melbourne Flyover is N471 and N set VN17 with an empty car move.

While the set is numbered VN17 it is actually a 4 car set. V in both N set and H set codes indicate a 5 car set(V being the roman numeral for 5). The BTN car is currently removed from the set.

VLocity VL49 nears the end of its trip as it negotiates the North Melbourne Flyover. The flyover did earn a bit of a reputation of dangerously wearing out the wheels of the Vlocity fleet before they put lubricators on it.

While most trains heading north out of Southern Cross use ether the flyover or the regional rail link tracks to the far right, Seymour trains for the most part share with the sparks. Most of these trains are made up of Sprinter railcars running as 2 car trains.

The 1610 Southern Cross to Baccus Marsh was for many years the domain of streamliner A66. With A66 being retired it became the domain of the N class. Here N469 leads H set SSH26. SSH in this case indicates 6 car short length(63ft cars) H cars.