Discussion of products from the American Locomotive Company. A web site with current Alco 251 information can be found here: Fairbanks-Morse/Alco 251.

by mkerfe
Wed Oct 06, 2010 12:26 pm
ALCOs are known for "belching thick black smoke." My question is why are they so "smokey"? Is it something in their design or is it a lack of maintenance as they get older?

by DutchRailnut
Wed Oct 06, 2010 12:38 pm
Turbo lag, when engineer opens throttle the engine gets to much fuel in relation to combustion air.
on newer engines this is electronicaly prevented, the EFI just won't send more fuel till Turbo catches up .
If Conductors are in charge, why are they promoted to be Engineer??? 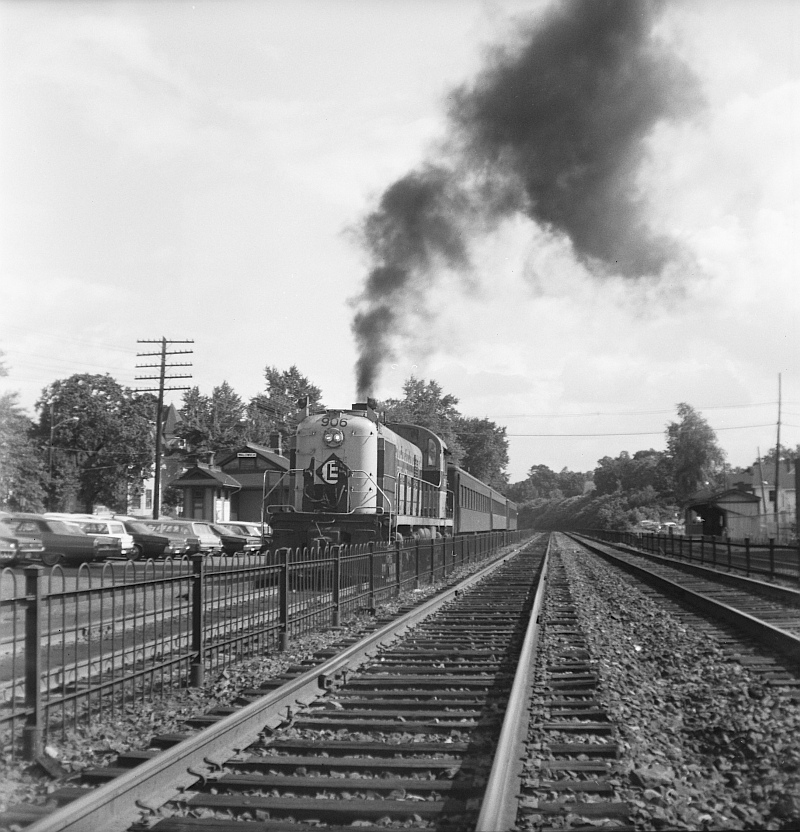 by Engineer Spike
Wed Oct 06, 2010 10:26 pm
I have a book about the rebuilding of the D&H's PA units with 251 prime movers. It said that our mechanical dept. designed a circuit, in the governor to advance the fuel based on the turbo boost pressure. It was tried out on some units before the rebuilds, and greatly eliminated the smoke.

by Alcoman
Thu Oct 07, 2010 11:46 am
Here is one that I photographed on the A&M three years ago!
You do not have the required permissions to view the files attached to this post.

by tgibson
Fri Oct 08, 2010 4:19 pm
As I remember EMD avoided it by having a clutched turbo that spun up quickly. I don't know what GE did.
Tom Gibson

by DutchRailnut
Fri Oct 08, 2010 4:50 pm
EMD is two strock, less problem but it polutes all time, with or without turbo.
GE smokes too, but when GE came out with U boats they already had loads of electronics to control the Turbo lag.
If Conductors are in charge, why are they promoted to be Engineer???

You do not have the required permissions to view the files attached to this post.

by DutchRailnut
Sat Oct 09, 2010 6:30 am
Even the best protected engines will belch smoke when conditions change to quick for electronics to handle.
like wheel slip, etc etc. or when electonics are not working as they should.
If Conductors are in charge, why are they promoted to be Engineer???

by oibu
Sun Nov 07, 2010 6:48 pm
To get to the point of the original post, which doesn't appear to as yet have been directy addressed- Alco turbochargers were driven purely off of exhaust gases, with no physical mechanical connection to the engine. Thus, upon engine loading, the engine would run extremely rich (i.e., tons of fuel, not enough oxygen) until the exhaust gases brought the turbo up to the proper speed. The heavy smoke is due to the presence of unburned or incompletely burned fuel. A properly running Alco prime mover will be capable of emitting huge volumes of smoke when the throttle is rapidly notched out, but when running at any given constant rpm (i.e., throttle setting) should be virtually clear at the stack. The only other phenomenon sometimes responsible for heavy smoking of an otherwise healthy prime mover is carbon-buildup which can result in heavy smoking upon acceleratiob after long periods of idling, or likewise can occur when operating at higher throttle settings after an extended period of operation at only low rpms. This can occur in both turbocharged and normally aspirated units.

by stevej
Tue Nov 28, 2017 3:09 am
G'day,
Yes, I do adore my beloved Aussie Alcos that can belch out heavy plumes of black smoke when notched up after idling.
http://s3.amazonaws.com/rrpa_photos/482 ... 201991.JPG
http://s3.amazonaws.com/rrpa_photos/125 ... 201984.JPG
They can also belch out heavy grey smoke when fired up when being very cold.
The grey plume dissipating once the engine has reach operating temperature.
I have also had one blowing smoke rings from the stack.
An obvious sign that it was starving of fuel.
Sure enough it eventually shut down and upon investigation the fuel filters were blocked.
Fortunately, we made it up the steep climb before it did shut down.
https://youtu.be/W6Bp3OHS7Co
While working in Tasmania, and bereft of my beloved Aussie Alcos, I discovered that the English Electrics could also belch black smoke.
Also emit showers of sparks from the exhaust stack when working hard at night time.
So much so, that certain locomotives were banned from working the steep sections of the network during summer time.
Steve.

by Pneudyne
Tue Nov 28, 2017 5:26 pm
Woodward did offer an optional fuel limiter on its PG locomotive governors. It was intended to limit smoke during engine acceleration when the turbocharger was “running behind the engine” so as to speak:

Woodward PGEV & PGE I&OM p.31.png
I am not sure when it was first offered, but I’d guess in the early 1960s. Possibly it was developed at GE’s request for the U25B:

GEK-18113C p.01.gif
The underlying idea was not new; Sulzer had introduced a manifold pressure-operated fuel limiter c.1946 after patenting it in the late 1930s.

I have heard anecdotally that the Woodward device required careful adjustment if it was not to operate too aggressively and so limit steady-state power. One suspects that if this were so, some operators may have chosen to disable it or set it for less-than-desirable fuel limiting under acceleration.

Whether any Alco locomotives fitted with the Woodward PG governor also had the fuel limiter I do not know. From casual observation in Sri Lanka a few years back, I noticed that the M4 class DLW-built DL560 produced a lot more smoke during acceleration than the M8 class MLW-built MX620. The DL560 had the GE 17MG governor, or at least a later DLW iteration of it, which as far as I know did not have any acceleration fuel-limiting device, and was fast-responding. So, one would expect that DL560 fleet to produce a lot of acceleration smoke when the throttle was moved very quickly to Run 8 from a standing start, which looked to be the case in Colombo suburban service. The MX620 had the Woodward PG governor, and its much lesser smoke output suggests that it also had the fuel limiter.

Of the Australian Goodwin-built Alco locomotives, the early DL500s (through to NSWGR 4460) had GE 17MG governors. The later DL500s and I think all of the DL531s and DL541s had Woodard PG governors. The observational evidence suggests that they were not fitted with fuel limiters.

English Electric (EE) had its own governor (without a fuel limiter option), but also fitted Woodward PG and Regulateurs 1100 governors from the 1960s. The latter had manifold-pressure fuel limiting, in this case operated by moving the load control pilot valve sleeve. Later Rocklea-built Australian EEs, from the QR 1600 class onwards, had Woodward PG governors, and this included all of those with the “Australian special” version of the Mark II 12-cylinder engine. My guess is that they were fitted with fuel limiters, but I do not know for sure. But definitely the NZR Di class of 1966 was so fitted.

Re GEs, in its early days, the U26C (NZR Dx class) was known for throwing quite a flame from its stack when working at full throttle. These had Woodward PG governors with fuel limiters; the exhaust flame was a steady-state rather than a transient phenomenon.

The EMD case, with mechanical drive to the turbocharger at lower engine speeds and outputs, has already been mentioned. Two-stroke engines are more difficult to turbocharge as the exhaust gases are much more diluted by scavenging air than in the four-stroke case, and so have a lower energy density. Given that the gas exchange process must take place during the bottom 15% or thereabouts of the piston stroke, excess scavenging air is required. In any event the EMD turbocharger requires mechanical drive at lower engine speeds to provide enough combustion air under steady state conditions, and not just under engine acceleration conditions.


Cheers,
You do not have the required permissions to view the files attached to this post.

by stevej
Thu Nov 30, 2017 2:40 am
G'day,
Yes, the mark one 44 class (4401 - 4460) denoted by painted road numbers and not number light box on the number two end cab, had GE governors. Plus originally GE traction motors which were later changed to AEI motors. The GE governor was a trap for the novice, in that there was no low lube trip button. If the unit suffered a low lube oil shut-down, the overspeed lever was thrown. The mark one 44s also had an odd cycle beat when idling. I am not sure if the GE governor was the reason for this. Other than the mark one 44s, the majority of motive power that I have experience with had Woodward governors.
There is substantial pressure behind the low lube trip button on a Woodward governor, as I discovered one shift. Our lead 80 class began to suffer from low lube shut-downs. There was ample oil in the sump when checked, and no apparent leaks in the engineroom. We were about to commence the 6 km 1 in 40 (2.5%) climb titled Tumulla bank. The engine began to rattle indicating imminent shut-down, so I returned to the engineroom and attempted to hold in the trip button. I grabbed a wooden wheel chock to use, but the button bored a hole in the wood.
I spent the climb inside the engineroom running back and forth from the engine control switch to the start button and governor. Knowing that we would stall and probably not lift the train on the grade with the front unit dead, I left the engineroom cab door open so that I could yell to the driver. Telling him to keep powering regardless of the alarm until I told him to shut-off.. Each time that the low lube button tripped, I ran to the engine control switch to turn it to IDLE, then back to the governor and reset the button and thump the start button. As soon as it groaned into life, I ran back to the control switch yelling to my driver to shut-off power. Quickly turn the switch into RUN, and yell for him to pick up power again.
We came close to stalling, but managed to keep inching up the hill to the top. Drenched in sweat, I finally returned to the cab having left the unit shut-down the final time once over the top. Thankfully, it was not winter as we did not have any cab amenities with the unit shut down. We continued until we could detach the dead beast, shoving it into a siding, along with a portion of the train. The relief crew had more 1 in 40s to face and would not make it without reducing the load.
I also suffered a slipped pinion on that hill, and spent the climb walking along beside the loco tossing sand under the wheels. But, that is another story.
Steve.