by BR&P
Sun Nov 11, 2018 10:16 pm
You're welcome. Are the plans to restore the interior to railroad configuration, or gut it for displays?

by BR&P
Thu Dec 27, 2018 8:46 pm
Great! Glad to hear that. There are several sources for pics of the interiors "back then". I'm not aware of any one article which goes in depth (altho possibly some old issue of the NYCRRHS "Headlight" might have one). But there are various other places where you can piece together a pretty good understanding.

For one example, Knapke's book "The Railroad Caboose" has a cut-away drawing on the inside cover, plus some NYC company photos in the book itself.

Good luck and keep us posted on your progress!

The drawing is dated 1941. I can provide you a PDF copy in the interest of preservation if you contact me.

Otto Vondrak wrote:Here's a link to a blueprint I had scanned at my local office supply depot:

The drawing is dated 1941. I can provide you a PDF copy in the interest of preservation if you contact me.

Otto, while there may be some beenfit from that drawing, it's actually not correct for what that group is doing. They have the former NYC 19216, which is a typical "19000 series" caboose which actually included some 17000 and 18000 series cabs.

The drawing is a bit puzzling to me. It's labeled as a 19000 series but actually is a drawing of the 50 (20100 - 20149) cabooses built in East Buffalo in 1944. The car is longer, the window spacing is different, slight interior differences, and other minor details set this off from the "typical" NYC cabooses. Where did the 1941 date come from? I suspect it's actually drawn a bit after that.

Again, perhaps "ATeam" can get some use from that. But I would caution against thinking that drawing applies to the car they are restoring.

BR&P wrote:The drawing is a bit puzzling to me. It's labeled as a 19000 series but actually is a drawing of the 50 (20100 - 20149) cabooses built in East Buffalo in 1944. The car is longer, the window spacing is different, slight interior differences, and other minor details set this off from the "typical" NYC cabooses. Where did the 1941 date come from? I suspect it's actually drawn a bit after that.

by BR&P
Thu Jan 03, 2019 8:37 pm
Sept 22, 1941 is well before Pearl Harbor. Sources I have seen, but can't put my fingers on, showed those built in 1944, presumably to help in the war effort. That seems like a long lead time from planning to production, roughly 3 years. Perhaps the shortage of materials contributed to that delay. I had *assumed* they were a result of the war, not something that was planned before it began. The learning never stops!

by BR&P
Thu Jan 03, 2019 9:13 pm
Here's a site with lots of NYC caboose info, and links to detailed discussion of the various types: https://nycshs.org/nycs-research-information/" onclick="window.open(this.href);return false;

And here's one of those links, with details of those 50 cars in Lot 232 which Otto has plans for. https://nycshs.files.wordpress.com/2014 ... ssics2.pdf" onclick="window.open(this.href);return false; Let me suggest that while these 50 cars were not identical in number nor construction with the "19000" series in the thread title, it is more than appropriate to discuss them here as well IMHO.

You will note that on pages 7 and 8 there are interior pics of a P&LE wooden caboose from the same plans as your NYC 19216. This is a good reference for you. I will note a couple minor differences - in the NYC cabooses I was in, the fold-down desk was not across from the stove as shown, but rather between the 2 side windows farther from the cupola. Maybe the conductors were too hot, I don't know, but I was in MANY of them and don't recall seeing any where the table was by the stove.

Also, the heat shielding on the locker wall did not usually extend up that high. The topmost section in that pic was not there as I recall. I'm not prepared to say "always" and "never", that was a long time ago and I was not specifically looking for that shielding when I was there. But seeing that P&LE pic it immediately jumped out at me as "wrong".

The only other observation I'll add was that I never ever saw a NYC caboose with the cushions as shown in the pic - one per section, flat on each bunk. Maybe that was the intent, and maybe that's how they came out of the shop, but there ALWAYS were extra cushions on at least 2 or 3 sections, sometimes with a backing to allow laying back in a semi-reclining position. It was nothing standard or consistent, just how each crew arranged their quarters. But at least 2 cushions one on top of the other was the desired furnishing.

I was in another 19000 caboose which has been nicely restored, and I told those folks that to be totally accurate it needed dirt on the floor, grime on the windows, some old newspapers on one of the bunks, and the aroma of stale tobacco smoke and maybe a bit of kerosene in the air. (Since we're talking about open-to-the-public here, we'll skip the discussion of a few pin-ups on the walls

by BR&P
Sat May 08, 2021 8:05 am
On Page 3 of this thread I posted an interior pic of NYC 19106 taken in the early 1960's, exact date unknown. That pic no longer comes up, probably due to some software update on the forum. Here's a re-post. Lower half was a brown or reddish-brown. Top half was cream. Photo was taken on the Second Belt job, as the train prepared to head south from Kodak at Ridge Road in Rochester at perhaps 8PM. Conductor was R. E. Bernhardt.

NYC 19106 interior.jpg
You do not have the required permissions to view the files attached to this post.

by MatthewB
Thu Jul 15, 2021 6:04 pm
Hi all. I have an NYC 18000 series caboose on the property I have recently purchased. To be specific 18015 is the unit number. I’m just looking for more information about the caboose if anyone can point me in the right direction or provide some information. Thanks 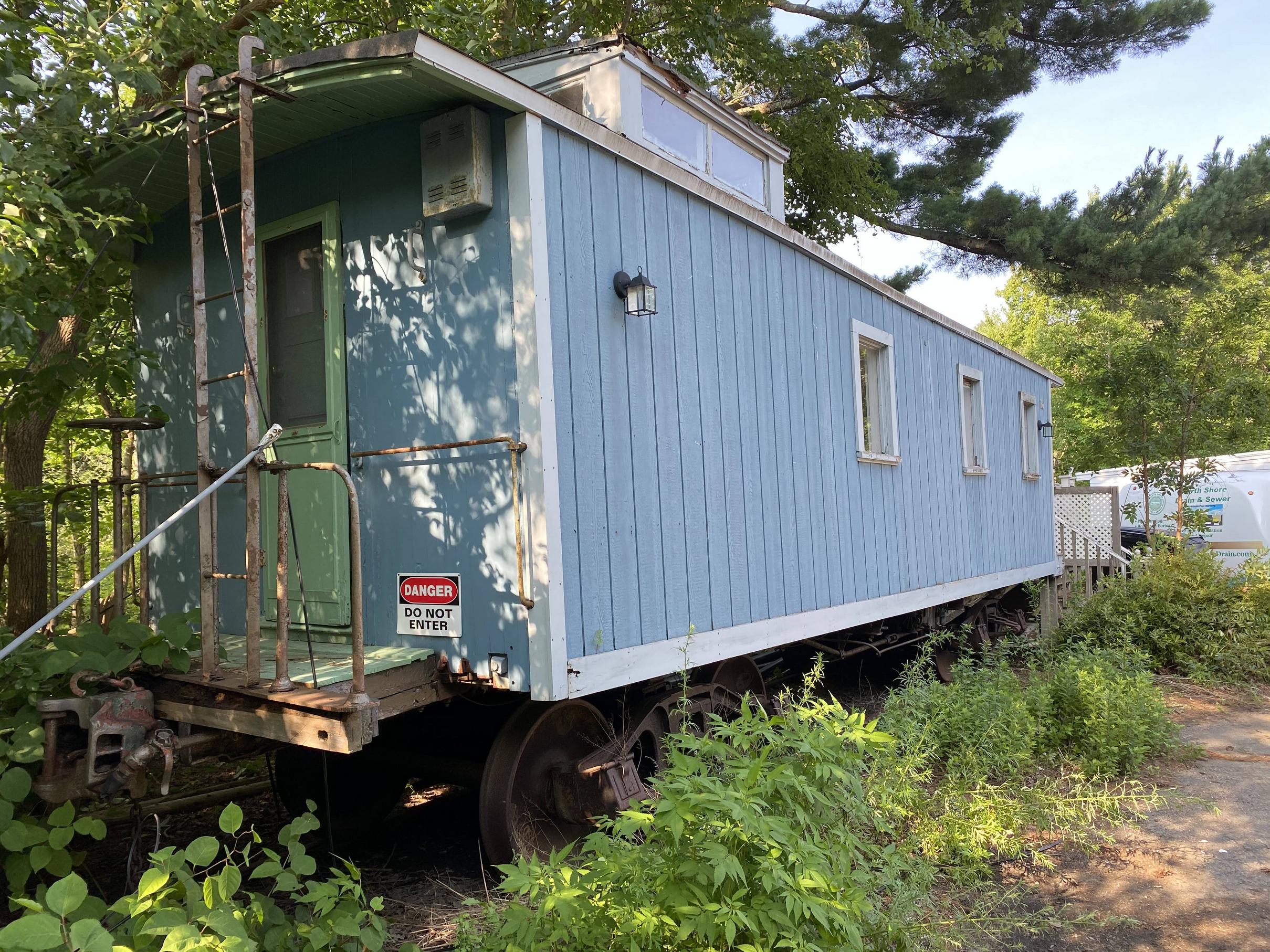 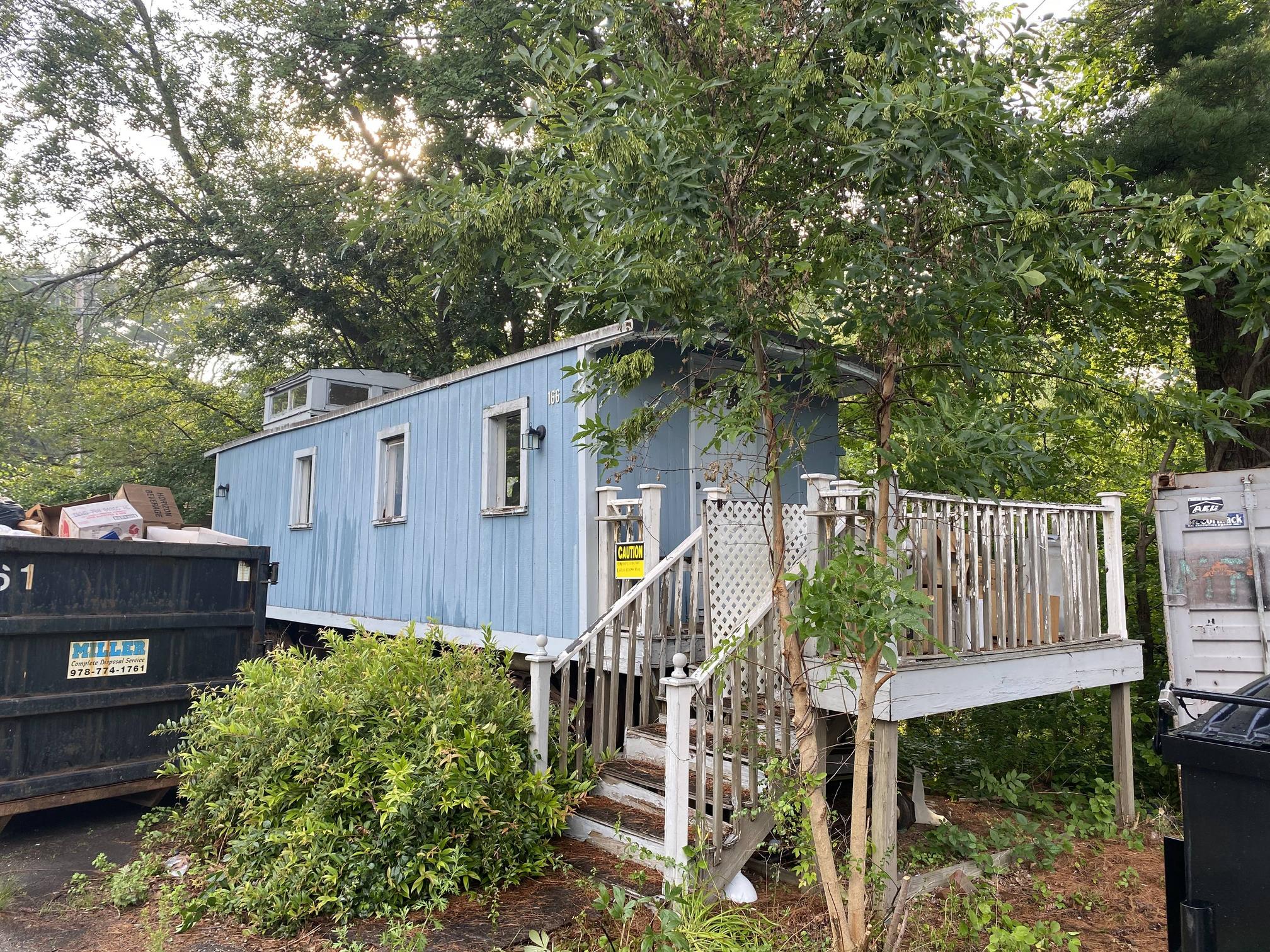 by BR&P
Sat Jul 17, 2021 7:18 pm
Welcome Matthew! Looks like that's in pretty good shape all things considered. I don't have any record of it in active service, earliest I have is July 1976 it was displayed at a travel agency in Peabody MA. There was a slide of it sold on eBay in April 2018.

I presume you're getting the number from the center sill under the car? Look carefully through any dirt etc, for stenciling of various shop visits.

I'm guessing that caboose was retired from NYC prior to the mid 1960's. When the first series of steel "platform" cabooses was built in 1966, they were numbered in the 18000 series. Some existing wooden cabooses in the 18000's were renumbered to make room for the new ones. If yours is clearly ID'd as 18015, it apparently was gone from active use before the new ones were built.

What are your plans for it? Is the interior gutted, or still original?

by MatthewB
Sun Jul 18, 2021 7:26 am
Hi. The interior has been gutted and used as a commercial office/business since I’m guessing the early 1970’s. I currently do not have any plans for the caboose. I do not have the time and resources to restore it. I was pondering putting it up for sale. I was just hoping to get more information about its history on the rails. The under frame is pretty rusty. Any paint that was on it has fallen off. I checked underneath really well with a flashlight. It is in pretty good shape overall. It would be really cool to make a private rail car for traveling out of it. Thanks for the info.

by BR&P
Tue Jul 20, 2021 5:58 pm
While I totally agree how great it would be to travel in it, there is zero chance of that happening. There are many factors which preclude that - the first and foremost being the age of the car itself. Likewise the type of bearings on the trucks, the air brake system, the wooden car body itself. The large railroads today would not want anything to do with moving it over their lines. Not trying to be negative, just realistic.

Now it COULD be operated on a museum-owned track, there is one identical to it at the Rochester & Genesee Valley railroad Museum (NYC 19877) and they have that available for the public to ride in over their trackage. Perhaps if others reading this thread are more familiar with which museums and tourist lines are nearby (I presume the car is still in Peabody MA?) they could suggest possible persons or places which might want it.

I'm not sure what sort of dollars it would bring - the cost of getting a lowboy and a crane (or a large wrecker like they use for big rigs on the highway) could add up and present an obstacle for a potential buyer. Good luck and keep us posted how you make out!