Who can tell me some background info about the steam switcher in Cooperstown? I came across it summer before last. I didn't get any info. 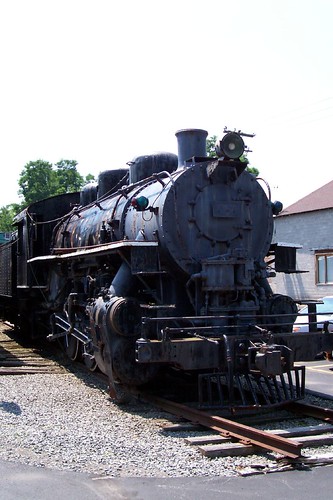 It's right in the center of Cooperstown, NY near the old depot. Here's a map
My New England Railroad Photo Archive page.

Username
Mattydred
Posts
159
Joined
Mon Apr 02, 2007 12:58 am
Location
Rochester, NH
by ricebrianrice
Mon Feb 18, 2008 7:23 am
That engine, is owned by the Delaware & Otsego Corp, aka NYS&W. It was their first engine that they ran the excursion with out of Oneonta. Once they bought the Cooperstown Branch from the D&H, it was used as the engine on that line also. Not sure when it was last used.

It is ex-Army, not sure about all the details. Look through the Susquehanna group, It has been discussed there also.

Username
ricebrianrice
Posts
491
Joined
Tue Jul 18, 2006 12:30 pm
Location
Binghamton, NY
by NYSW3614
Fri Feb 29, 2008 7:56 am
Ex US Army, ex Virginia Blue Ridge. At some point, either while serving on the ex NYC line out of Oneonta or on the Cooperstown Branch she was converted to oil firing. Last steamed in the mid-1970s. She may and I stress MAY be moving sometime soon with other equipment there.

by henry6
Mon Apr 28, 2008 3:12 pm
Actually the DO LINE or Delaware-Otsego did operate the line for quite a few years after the D&H left. Up to that time the DO line had operated on the U&D track east out of Oneonta. With the construction of I88 the track would be cut off just across the river from their NYC depot terminal. So, through the politics of the time, the DO line was offered the D&H Cooperstown branch in exchange for thier property, so that the D&H could vacate an unprofitable operation, and the state and feds got a superhighway. The DO line did operate freight to and from Cooperstown Jct. plus special tourist trains Cooperstown to Milford for several years. I remember two charter dinner trips in the earlhy 70's, one from Oneonta on the original line and the other from Cooperstown to the Junction on the C&CV (as the DO Line took the original railroad name for the branch). Our C&CV trip operated as a mixed train so that we could get the entire line in under steam! Shortly after the DO line took over the DL&W Richfield Spngs line (Central NY Ry.) and the Fonda, Johnstown and Gloversville in NY and the Lackawaxen and Stourbridge in PA; at the same time traffic dwindled on the C&CV to the point that the line was used for storage of cars and eventually abandoned.

henry6 wrote: Shortly after the DO line took over the DL&W Richfield Spngs line (Central NY Ry.) and the Fonda, Johnstown and Gloversville in NY and the Lackawaxen and Stourbridge in PA; at the same time traffic dwindled on the C&CV to the point that the line was used for storage of cars and eventually abandoned.

I forget just what year the I-88 construction took the original property, around 1968-ish though, I picked up a few slides of the original D&O operation that are around that date - one has a D&H freight with a C628 on the point, in the background. Pretty sure they're on the original ex-NYC line.

But they got the CNY in 1973 and the FJ&G in I believe '74 - I don't think the "Stourbridge Line" came about until post-Conrail, since it's a locally-owned line that operations are contracted out on (and currently intact and OOS). Heck, the maroon with gold stripe scheme the E9s wore is the original D&O diesel paint scheme, a similar one was used on the ex-D&H RS2s/3s they used on the CACV, CNY and at least one spent time on the FJ&G too.

Clears up things a bit for me, and I wasn't trying to prove anyone wrong, I had just been told this was an old D&H branch. I've got inlaws in the area and visit often. When was the DL&W line through Richfield and Cedarville abandoned?

Also, I've seen online that someone was killed on the Cooperstown branch at a grade crossing accident in the 1980s I think it was? What I saw was an ad for a book touted by a ridiculous organization that advocates rail companies as being at fault in most accidents. Anyone know about this? I'll see if I can find the link again.
My New England Railroad Photo Archive page.

Username
Mattydred
Posts
159
Joined
Mon Apr 02, 2007 12:58 am
Location
Rochester, NH
by ricebrianrice
Wed Apr 30, 2008 6:44 am
The book is probably " Railroaded in Cooperstown" by David Butler. There is a pretty extensive discussion about it farther down in this forum. The discussion got heated and was locked last I checked.

If I remember correctly the accident occurred on the Utica Branch, near Sherburne.

Anyways, I have a question about DO#2, the 0-6-0.
Noel Weaver commented that it was converted to burn oil, but made it sound like it was never used after the conversion. Anyone have more info, did it run after being converted to oil?
Nothing is impossible for the person that does not have to do it!

Edit: I found the thread, forget I asked.