It looks like the Greenwich area during the wire replacement program. That section of wire was replaced in the late 1990s I think.
I'm stuck on a sandbar on Cape Cod, and I couldn't be happier!!!
Top

Stamford 1973 with the old MUs, semaphore signals and catenary 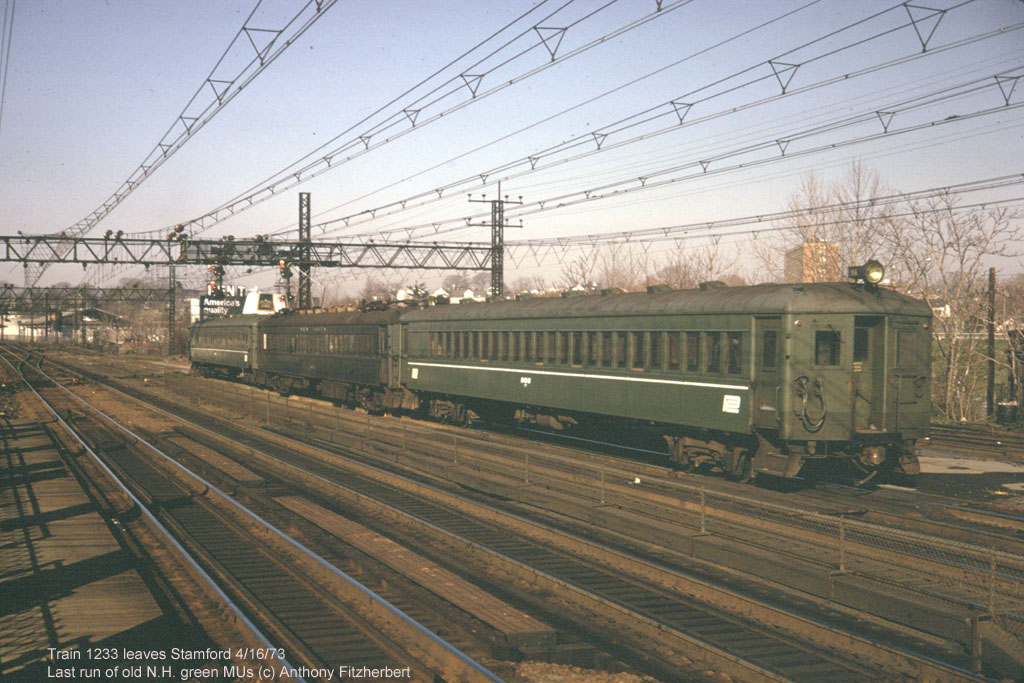 [quote="Penn Central"]Stamford 1973 with the old MUs, semaphore signals and catenary

OH does this bring back memories. These cars were a sweetheart to run
and had the best brake of any equipment that I EVER operated during my
41 years.
They never failed me on the road either, at least not to a point where I
could not get them going and into the final terminal. I felt bad when they
were retired but I accepted progress.
Noel Weaver
Top

Jersey_Mike wrote: It's a damn shame what MNRR did replacing that bit of living history. Trains still go just as slow in that stretch as they used to, the only difference is that now passengers don't have any objects of industrial beauty to enjoy as they plod along.

Actually, most computer serial ports do still support the ASR-33's baud rate, and you *may* still be able to get text based web browsers. I don't know if they'd work on a line-type text device (though UNIX in general will) though...

AFAIK, triangle catenary was never duplicated off the New Haven / NYW&B, and never caught on in the grand scheme of things. There's likely a very good reason why....

I believe the British invented the now dominant weighted system, back in the 20's. It's kind of interesting nobody in the US hit on it first - people loved inventing and patenting better mousetraps here, back then.
Top

Jersey_Mike wrote:
It's a damn shame what MNRR did replacing that bit of living history. Trains still go just as slow in that stretch as they used to, the only difference is that now passengers don't have any objects of industrial beauty to enjoy as they plod along.

Fortunately, most of the original 1907 catenary bridges--definitely objects of industrial beauty if there ever were -- remain holding the new wire. A better fate than the catenary structures on the Virginian, Great Northern, Milwaukee Road and the freight routes of the PRR, all of which saw the catenary removed and not replaced. I think the new wire has a nice style all its own, and oh yeah, the increased reliability is a nice thing for Metro-North's passengers.

A little history: In the early days of the wire replacement project, I got friendly with the contractors doing the work, and they kindly saved me several of the unique triangular hangers, which I still have today. They were also OK with me rooting thru their dumpsters which fortunately were located off RR property. They removed the old wire, for the most part, by simply unbolting the hangers at the three points, which left them intact for preservation (the trolley and messenger wires were, of course, cut every few feet.) When I asked why they were doing the removal this way, I was told that the bolts came apart with power tools quite easily, and that was faster than cutting them. Indeed, in the nooks and crannies of some of the hangers, the black paint was still "wet" in several locations. Not the condition you'd expect for something nearing 100 years of age.

I did take pictures of the removal of the old wire, and have several where you see two tracks with triangular, and two with the new. Unfortunately, these are slides, and right now I can't share them here. I'm hoping to upgrade to digital soon

.
Lousy light? Trains not running? So show me where it says, "Railfanning is Fun."
Top

I happened to notice some of the new catenaries being erected along a stretch of track near the Fairfield/Westport town line. They look from a distance like they are made from pressed aluminum or something like that, I am sure I am wrong, it just looks that way from a distance. I was wondering if the new catenaries will last as long as the older ones erected almost 100 years ago. On another note my poor BF lent me his Yasue VX-150, needles to say he will not be getting this back soon.

The new towers are galvanized steel.
If Conductors are in charge, why are they promoted to be Engineer???

Some places I can think of where you can see the new catenary towers...

- Bridgeport, on the reconstructed viaduct and bridge

Pretty much any area that has been reconstructed and reconfigured has new catenary towers. My understanding is that the original 1910-era catenary towers will remain in service as they replace and upgrade the wire to a constant-tension system.

yep the new towers have been up for awhile in south norwalk..
Awaiting the new M8
Top

Otto,
Because of the spacing of the orginal towers east of Stamford due to the floating beam support of the catenary. Will they also have to place new towers between the old ones to support the new catenary?
Last edited by Howiew on Wed Apr 16, 2008 6:34 am, edited 1 time in total.
Train Yourself To Relax...Ride The New Haven RR! The New York, New Haven & Hartford Railroad! Serving New York and the Great Industrial States of Massachusetts, Rhode Island & Connecticut!
Top

no the tower spacing remains the same and is about same both east and west of Stamford, about 280 feet apart.
only in curves are extra portals or single post and pull off used
If Conductors are in charge, why are they promoted to be Engineer???

A friend who is connected to the replacement project says look for new catenary poles on the Track 3 side at CP 248 (between Green's Farms and Southport). This is part of the next replacement project from Southport to the new new interlocking CP 248, and then to Bridgeport.