not seen by too many who dont work for the RR.
This is c Yard, west of tracks 20 and 21. From the Collection of Jay Bendersky.
Some of us called it the bat cave.

haah "the bat cave" i haven't heard that since I qualified the station!

What is the deal with that? Its obviously a partially constructed tunnel - was that one of the first attempts to cross the Hudson?
On the RR, "believe nothing you hear and only half of what you see"
John, aka "JTGSHU" passed away on August 26, 2013. We honor his memory and his devotion to railroading at railroad.net.
Top

Dont know the history of it, just might be what it is, a small yard to turn trains on, underground in penn station. Its cut right into the bedrock.
There was even a tower down there, now abandoned.
Marty, It runs on steam!
Top

The "tower" you refer to is an abandoned cleaners' locker room. The original tower, most recently named "KN" was located at the west end of 20-21 Track platform before it was extended about twelve years ago.

"C Yard" was never anything but a small cleaning yard, used to clean and turn the LIRR's rapid transit trains. It was constructed that way because it was encircled in Manhattan Schist, and didn't need support from any concrete walls.
------------------------
The Long Island Tool
"... overzealously discharges his duties;
...a "tool" of the administration"
Top

I knew it was last used as a cleaners locker room, I had assumed because of the design of it, it had once been a tower, it sure looked like one. It was two stories tall. My bad.
Marty, It runs on steam!
Top

Is that actually just hollowed out bedrock that the tracks are laid up to?
All you need is faith
To hear the diesels humming
Top

yes it is.. if you stand at the west end of track 21, and there are no trains in the yard, you should be able to see it.
Marty, It runs on steam!
Top

That photo looks almost like a painting.
Were you using a digital camera? Or what was the ASA number of the film?
Top

Did not take it, my friend jay bendersky did.
Marty, It runs on steam!
Top

How many MU's could you fit back there? 12? Also is this still used and what tracks can access the yard?
Stay on the right 4' 8.5"
Top

ElliotCourtney wrote:How many MU's could you fit back there? 12? Also is this still used and what tracks can access the yard?


8 cars, as said above it was really meant for the rapid transit trains. I think they use 4 tracks down there, but there are quite a few.
Top

Back before WSY was built, C Yard was used quite a bit to drill trains down and back. Amtrack crew used to drill into C Yard at that time under the direction of the NY Yardmaster who was located on the west end of Track 20-21. Before WSY was built, tracks 20-21 were 2 cars shorter with KN Tower controlling C Yard and the ladder track to A Tower. Tracks 20-21 were extended and a new ladder to WSY was installed because of the extention of the platform. KN Tower inself was removed to make way for the extention and the new ladder track thus shortening the tracks in C Yard. Back before the extention of the platform, C Yard; if I remenber correctly, had 5 tracks used for layup or switch equipment. 6c held 6 cars, 7 and 8c held 8 cars and 9 and 10c held 10 cars.

Any old timers who want to correct this, please feel free. You won't hurt my feelings.....The old saying, if you don't use it you loose it...

WSY really improved the flexability of Penn Station and the LIRR.
Top

Yeah west side helped, but I prefered the pre west side days where one always turned in the station. WSY, or "Wally World" as many of us called it could be a pain in the butt.
When building the yard, the RR did not put in a path to the yard adjacent to the tracks, so sometimes crews are forced to walk on the street from Penn Station to the Yard.
Not such a big deal I guess, but it was a pain sometimes, dealing with people on the street.
Especially on cold or rainy days.
One unfortunate Conductor was even hit by a car and killed on his way to the Yard.
In the pre wsy days, many crews would arrive in Penn Station, then have to Change ends and make equipment trains to eastern Electric terminals, that was the only way to lay up trains for the day.
There were a lot of Equipment trains to Long Beach and Port Wash, just to get the equipment out of the way in Penn.
Then another crew would report to the eastern teminal and bring the equipment back to Penn for the evening rush.
I dont think we lost many crews as a result, because around the same time wsy opened, electrification to KO was complete, and that added service, so it balanced out.
Marty, It runs on steam!
Top

It looks as though C-Yard will be improved as part of the Penn Station Access project.


Below is one of the better pictures of C-Yard available. 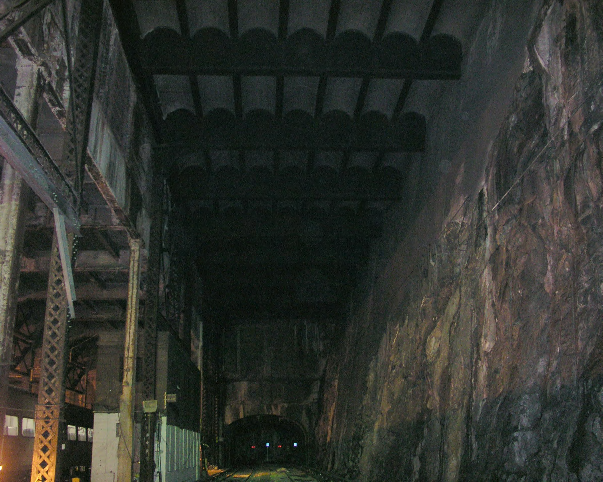 
Below is a solicitation for the improvement work. 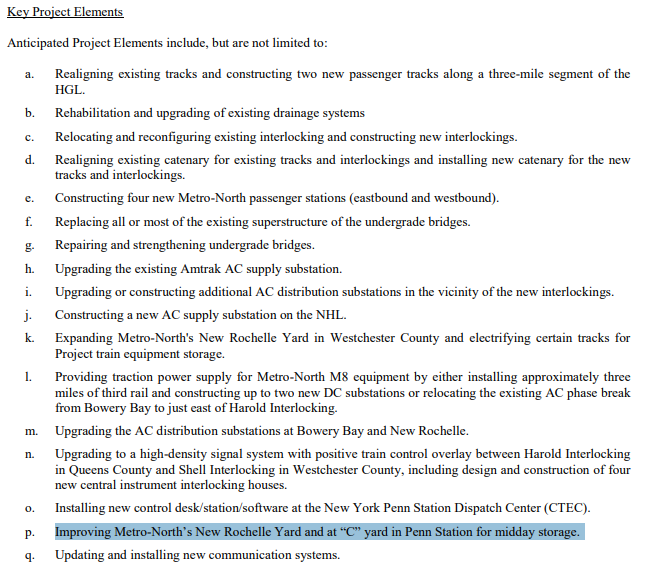 
Below is a notice of upcoming solicitations from 2017.


At one point in the early study phase of ARC there was discussion of Near Term Alternatives that could be implemented on a shorter time frame than the ultimate tunnel solution. One of the alternatives was an extension of C-Yard. 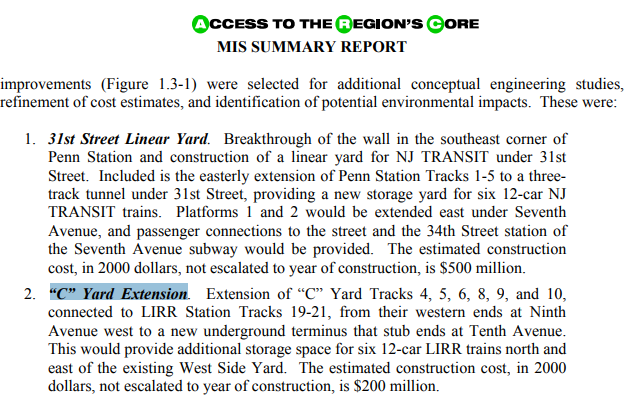 "“C” Yard Extension. Extension of “C” Yard Tracks 4, 5, 6, 8, 9, and 10,
connected to LIRR Station Tracks 19-21, from their western ends at Ninth
Avenue west to a new underground terminus that stub ends at Tenth Avenue.
This would provide additional storage space for six 12-car LIRR trains north and
east of the existing West Side Yard. The estimated construction cost, in 2000
dollars, not escalated to year of construction, is $200 million. "

Below is the reasoning behind why the extension of C-Yard near term alternative was dropped from further study.

DROPPED FROM FURTHER STUDY
Only accessed directly from PSNY platform tracks 19-21 used by LIRR. Major benefit of
this extension would accrue to LIRR. Any benefit to NJ TRANSIT would come as a result
of LIRR operating fewer trains through the East River Tunnels and Harold Interlocking in
Queens, and allowing more NJ TRANSIT trains to access Sunnyside Yard in Queens.
Marginal benefit to NJ TRANSIT. "

C Yard with its rocky wall and cave-like extension is a spooky place. There is a long abandoned locker room, presumably for cleaners, with a small office, And stairs to the basement. There's a basement with an Olympic sized drainage basin; you can say it's like hell's swimming pool. Dark, dank and damp. The water in it, and what lurks at the bottom predates Woodrow Wilson. Its only purpose seems to breed cockroaches. They are clinging to every concrete fixture there by the millions, perhaps billions. The biggest cockroaches we've ever seen.
Top
26 posts