Since I have been asked or answered questions regarding this topic at times, I offer this as a new topic. We were tending to stray from other topics at hand, so here goes if anyone is interested. This all occurred over twenty years ago, so at times I may have to dig through records for answers. Memories fade.....
Last edited by 452 Card on Wed May 04, 2011 7:51 am, edited 1 time in total.
Wheelslip! Back to the Barn.
MOTEL
Top

The project all began in the Bruce McIver era in 1988 when a planned third rail all the way to Port Jefferson got cancelled due to the cost of it would make it cheaper to purchase Bilevel cars along with Dual-Mode Locomotives, so then at that point, the rebuilding of 10 FL9's into FL9AC's took place. 7 went to Metro North, and 3 to LIRR. 10 Prototype C1 (not C3) Bilevel cars were built by Tokyu, and placed into service in 1991 with 2 leased Metra Units that only lasted a week until 4 GP38-2's (251, 259, 266, 269) were modified with special adaptor plugs for the coaches, and 259/266 were equipped with the M1 Pin type couplers. 251/269 could be used, but at that time if those were used, the engines had to turn around at Port Jeff Wye, or at the Montauk Cutoff to be placed on the respective end of the train. Also until the FL9AC's were finally placed into testing service in June, 1994, FA Powercab 608 was modified into a b unit where the cab was cut off, covered over in stainless steel, and had a new Caterpillar sled put into it for HEP.
Neil Feldman
Top 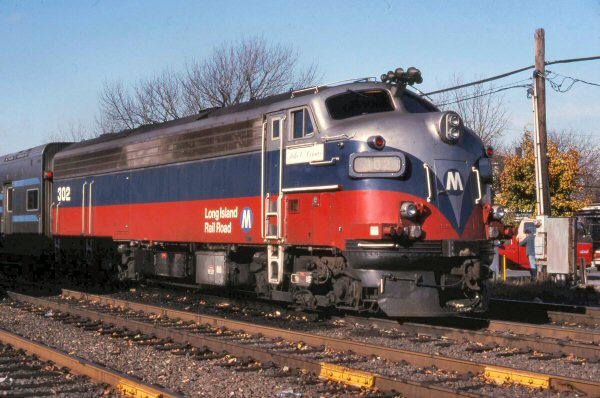 The Metra Engines were also used duing the testing phase of the c-1's and were on the property during that time.
Marty, It runs on steam!
Top

We had the Metra engines (516 and 521) at Shea because ABB did not have the FL9s ready for testing yet. Took a demo run out of Chicago to Joliet in a snowstorm at 80 mph with four Metra gallery cars, it was a hoot. ABB leased the engines so we could keep the project on time as Tokyu car had the pilot pair ready to go for initial testing.
We did all the early clearance tests with these engines, as well as stop distance and ATC checks.
They had 24 RL brake stands and no dynamic brake, and they rode real smooth with those three-axle trucks.
Sorry about the typo on the topic header.
The 3100 was capable of providing 650v dc or 480v ac with the turn of a switch. The work was done in the back shop by our own manpower. I know it could (and did) handle all ten C1s, but as far as C3s its not known. The hep on the C3s "overlaps", as the juice from either engine when double-ended goes to every other car. If I remember correctly, only a max of six C3s can run with one engine before the KW output begins to drop off.
Wheelslip! Back to the Barn.
MOTEL
Top

Why did they get rid of the FL-9AC "Starships"? I know they had teething problems, but apparently once those were worked out, they were spectacular performers! With the demise of the C-1s, the rear couplers on the '9s could have been replaced with standard couplers, and MU engine controls reverted to standard jumper cables, and voila!, ready for service with the C-3s.
Fairbanks-Morse forever!
Top

The LIRR FL8ac had non standard MU systems based on a 36 pin system with Amphenol plugs, it was also 32 volt since the C1 cars were 32 volt DC for all controls.
It would have taken way more than just putting other receptacles on.
The 10 FL9ac units were basicly a pre production test series for AC propulsion, only the CP Alco and Amtrak F40 preceded it in North America.
The DE/DM units are based on the same siemens (abb) system the FL-9ac had, 3 inverters (one hep, two propulsion) and a micas computer for control of engine and inverters.

http://rides.webshots.com/photo/2213791 ... host=rides
If Conductors are in charge, why are they promoted to be Engineer???

What Dutch said.
In addition, we had reliability issues with the screw-type air compressor and the MICAS computer having to be reset during mode changeover.
If the ambient temperature was warm (i.e. summer), we kept the compressor shut down in West Side until the last minute, then charge the system, do our brake test and get into Penn ASAP. We usually lasted until Northport or Kings Park on train 660 until the compressor would shut down from overheating. It was only rated for the mimimum output and was not enough for the C1 cars air requirement. (always ran with eight cars)
Since we did not have a gap detection system to filter out EMI, mode changeover was risky if a gap was encountered. MICAS would go down and have to be reset while we toodled along with no power until it got back on its feet. Meanwhile, 204 would be calling frantically over the radio, "204 to 660!" "204 to 660!!" as we played the reset game crossing over at Harold with the rest of the railroad waiting for us to clear. What fun.
Wheelslip! Back to the Barn.
MOTEL
Top

Thanks for the info. But what's EMI?

I recall that the original FL-9s in their as-built configuration with D.C. technology had problems with air compressors, too. They had separate, small electrically-powered piston-type compressors for use when running in the electric mode, but these became defective, which is one reason why they started running in diesel mode into Grand Central. They had to run the diesel engine to keep the brake system charged.
Fairbanks-Morse forever!
Top

Electro-Magnetic Interference. Raises h*** with signal systems, ATC cab signal and any other non-filtered system that reacts to its evil doings. NYP to Jamaica is 25 Hertz territory, and very susceptible to EMI. After Jamaica, its 100 HZ territory so the rules change as to what happens. Its all a big subject of debate as to how to control it. The DMs have a gap detection system (duh!).
As to D-Mode into GCT- SSSSSHHHHHHHH!
Wheelslip! Back to the Barn.
MOTEL
Top

Glad I read further into this post here! An example of this changeover can be seen if you have Railroad Video Productions Tape #112 (WSY to Syosset) which is the video inside the FL9AC's. There you can see when they start out of WSY, enter Penn, and change over modes just as they get into Harold. #113 is the second part of the video between Syosset, and Port Jeff.
Neil Feldman
Top

A pair of former LIRR C1 prototype bilevel coaches (and a pair of former ATSF full domes) are now in upstate New York, ready to enter passenger excursion service between Saratota and North Creek later this month on the Saratoga and North Creek Railway. The previous operator of this x-D&H line was the Upper Hudson River Railroad.

Everyone: I remember the C1 coaches were a VERY expensive proposition...they cost $3.3 Million Dollars each or $33 Million Dollars for the 10-car train because that they were prototypes...
They were married pairs with MU couplers explaining why locomotives needed to be modified to be used with them and became their regular power...and we can't forget the unique 3100 Power Car...

Back in the early days of the Internet-the early/mid 90s-a LIRR Conductor who regularly worked that assigned train to Port Jefferson had a web page with pictures and information on this test
program that was quite informative...I wonder if anyone remembers it or it is still around...Was it the "LIRR Bilevel Web Page" or under a related name? This program - looking back 20 years later -
was memorable for anyone interested in the LIRR...and how the C3 cars were designed based on these tests...

I'd like to know on that site also if it can be found!
Neil Feldman
Top
24 posts