Having been invited to Steamfan77's home to view his layout in progress, all I can say is WOW!!
Well done trackwork with the correct "feel" of place.
I can't wait to see some scenery as that would put a great piece of work into the field of Phenomenal>
MADDOG
Top

Thanks Maddog! I'm laying down some roads and sidewalks. I'll post some pictures soon.

Andy's progress, layout design, attention to detail and construction are fast becoming a testament to a superb LIRR example of the Oyster Bay branch brought back to life!

I've been installing some streets and sidewalks, and I finally put the signal bridge in and connected it to the system. The first picture shows Main St south of the tracks. The parking lot for the sub station is to the left of Main St. The last picture shows the position for Nassau Tower between the tracks and sidewalk.

Andy
You do not have the required permissions to view the files attached to this post.
Top

Here is a picture of Willis Ave, the signal bridge, and the area where the sub station will be located.

Andy
You do not have the required permissions to view the files attached to this post.
Top

Thank you for the kind words Steve...

Hi. Does anyone know the best model kit for the P72 and P75 series cars? I'm planning a 1970s lirr layout and i'm going to need a ton.
china does trains better
nationalize the class 1s
Top

You might try http://islandmodelworks.com" onclick="window.open(this.href);return false;,
They used to make kits of the MP 70/MP72/MP75 cars
The Land of Enchantment is not Flyover country!
Top

Try Funaro & Camerlengo. They make: P-72 resin kits. They also make Ping Pong cars. They used to make the MP75 years ago but Steve Funaro dropped the kit since it was a bit of a hack (both sides were the same casting - which is wrong) and it was a kit where the sides, ends and roofs were separate castings (known as a "flat kit"). The P-72 and Ping Pong are one piece bodies (so much easier). BTW if you see Ping pongs on ebay from Images Replicas.. they are F&C kits rebranded.

Note these are "craftsman" kits so a bit of skill is required (not horribly difficult, but certainly not an Athearn Blue Box!) They do make nice models. I'll post a photo of a P-72 I am working on later. BTW hint: to clear the casting flash from the windows: use the BACK of an Exacto knife on the inside of the window to scrape away the flash.

Island Modelworks used to make MP75 resin kits but the mold broke several years ago, and Joe has not redone it. He's also gotten into 3D printed kits (though most are N-gauge). I have one of the MP75 kits and they are (were) a bit "rough". The casting is about 1/8 inch thick so inserting windows is a royal pain. The power train can be adapted from a Proto RDC model. Maybe we can pester him to bring the MP75 back
Pat
Top 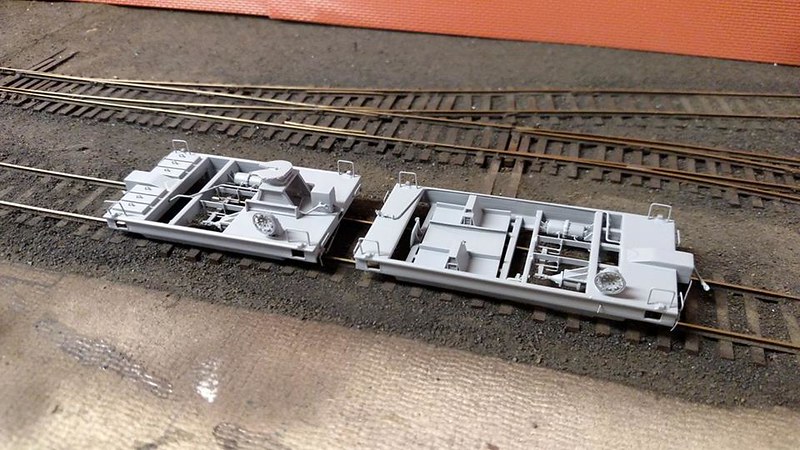 No pictures rn but i took delivery of a Athearn Blue Box coach to be converted to a ex-nyc coach. A bit of a stretch but with good details i think it could work well
china does trains better
nationalize the class 1s
Top

Walters did a decent job with the Heavyweight Parlor cars,as most of them were ex-PRR parlors.
As for the brief Lightweight car era,LIRR grabbed what was made surplus as Class 1 RR passenger services wound down.
That's how the EL Phoebe Snow OBS car landed on the Cannonball.

The Land of Enchantment is not Flyover country!
Top


What trucks are you using on the P72's?
Top

The trucks are IHC #4240 (Black) or #4241 (Silver). Gorgeous trucks though have not yet figured out how to swap the wheelsets for .088" wheels.. They also have pickup wipes for lighting. I happened to grab a silver set for the photo (yeah,needs to be painted).